Get a free recipe
Subscribe
Coffee Is Cooler Than Ever. So Is the Third Wave Dead?
By: Elizabeth Dunn 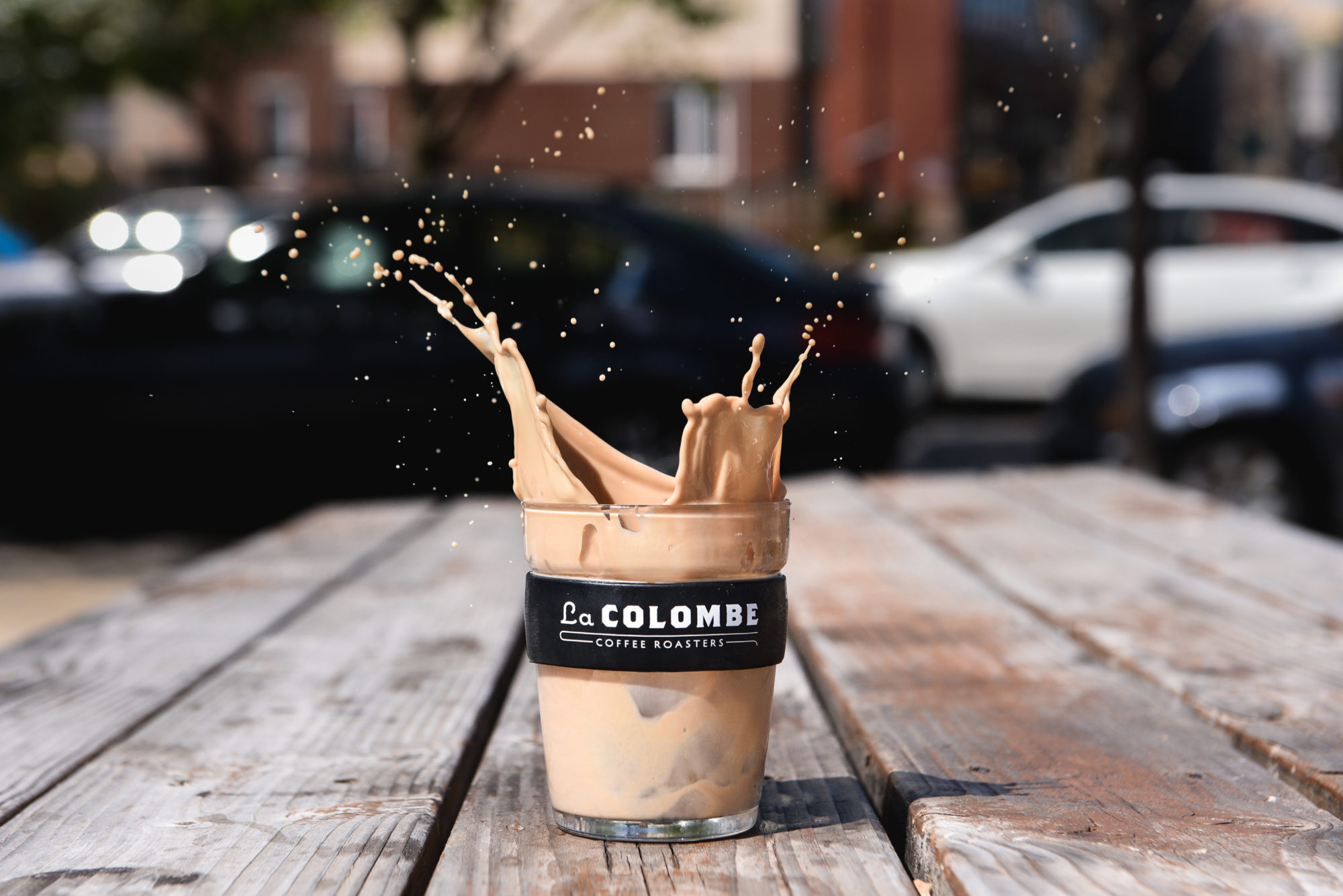 Growing demand for cold coffee has lead to a meaningful departure from many of the aesthetics and values central to the third wave. Is this a good thing?

It was on a Thursday morning in January that I realized coffee’s third wave may be over. The wind chill in New York City had dipped into the negative teens, and I was walking my son to preschool. We trudged down Broadway, mummified in sweaters and wool socks and mittens, voyagers beating our way across the frozen tundra. Coming toward us was a man invisible beneath a fur-trimmed parka. In one ski-gloved hand, he clutched an iced coffee.

This cold-coffee-in-any-weather thing has been gathering strength for years, challenging hot coffee, the O.G. source of all that is good and holy and caffeinated, for our collective devotion. It wasn’t until recently, though, that I realized just how much territory cold coffee has gained. As the winter months slog on, iced lattes continue to flow from the espresso machine at my local coffee shop, and at the Whole Foods down the street, the sprawl of grab-and-go chilled coffee products keeps widening. Nearby, Starbucks hasn’t even taken the Nitro Cold Brew decals off its windows.

A few months ago, I met up with Todd Carmichael, the founder of the specialty coffee roaster La Colombe, at one of his downtown cafés. Carmichael was in New York showing off a new line of ready-to-drink canned coffees, in flavors like Caramel Draft Latte and Cold Brew Shandy Lemonade, and began reflecting on the changing nature of the specialty coffee business. He told me that when he opened La Colombe, in 1994 in Philadelphia, the café served no cold coffee; today, cold drinks account for more than two-thirds of sales at the peak of the season, in August. Carmichael, 55, has long prepared cold brew — coffee grounds steeped for hours in cold water, then strained — for his own personal consumption. In 2011, he started offering it in La Colombe’s 30 cafés, and in 2015 he made cold brew available on tap, along with something he called a draft latte: espresso and milk, charged with nitrous oxide to create the same frothy quality as a hot latte. “That was like somebody throwing a power switch,” Carmichael recalls. “From one day to the next, we had a massive sales shift to cold.” Over the past three years, cold-coffee consumption in La Colombe’s cafés has tripled.

La Colombe is hardly alone in this. At Stumptown, the Portland, Oregon–based roaster with 11 locations around the United States, now owned by the European holding company JAB, about half of all coffee sales are cold. “Weirdly, it’s not terribly seasonal,” Mallory Pilcher, the brand’s marketing director, reveals to me. At Café Grumpy, an independent New York–based chain that serves a rotating selection of single-origin coffees, cold brew is now the number one seller. Demand for the likes of turmeric and matcha lattes on ice has increased year-round, too. Blue Bottle, the Nestle-owned roaster with 68 cafés internationally, created its New Orleans Iced Coffee—a creamy, sweet, prebatched drink steeped with chicory—back in 2004 in response to customer demand for iced lattes. In 2016 the company opened two “cold bars,” in San Francisco and L.A., serving zero-proof craft cocktails made with chilled coffee.

I myself have succumbed to cold coffee’s sweet enchantments. Fancy coffee has long been one of my extravagances; I usually go for Ethiopian varieties, although sometimes I’ll stray to El Salvador or Rwanda. I grind it every day, just as I’ve been told to do, using an expensive electric burr grinder—a concession that I made once motherhood rendered hand-grinding too tedious—and prepare it in a French press, using three tablespoons of coffee grinds to nine ounces of hot water. Lately, though, there’s almost always a bottle of Grady’s or Califia Farms cold brew concentrate in the fridge. I find my way to it sometime after lunch, mixing the coffee with whole milk and cubed ice, and drinking it far too quickly, until I’m practically levitating out of my desk chair—the grown-up equivalent of sneaking a bottle of Yoohoo after school.

The modern history of coffee is often divided into “waves,” phases that describe the changing ways in which the drink is viewed and consumed in America (the coinage belongs to a roaster named Trish Rothgeb and dates to 2003). In the beginning, Folgers and Maxwell House made coffee a staple beverage throughout American homes: wave one. The second wave began with the popularization of espresso drinks and their attendant European-café vibe, turning coffee into a gourmet indulgence (this wave is all about Starbucks, although I often think of Niles and Frasier Crane sipping bone-dry cappuccinos at Café Nervosa). My fancy coffee belongs to the third wave, which took off around 2000, with roasters like Intelligentsia, Counter Culture, Stumptown, and Blue Bottle—there are now many more—approaching the category with a heightened level of connoisseurship. Coffee became more like wine, with a new attention to provenance, production methods, nuances in flavor. When it came to sourcing the beans, environmental impact began to be considered, and ethical trade practices were prioritized. Lighter roasting profiles came into fashion, which meant sweeter, fruitier, high-acid cups, ideally taken without milk or sugar. Third-wave baristas, with their gooseneck kettles and Chemex pots, approached brewing with a new degree of precision and intensity.

The growing demand for cold coffee over the past few years has marked a meaningful departure from many of the aesthetics and values central to the third wave. For starters, there’s cold brew’s full, mellow flavor, a firm contrast to the thin, fruity, tea-like brews that baristas in specialty coffee shops have been pushing for years. When coffee is brewed cold, instead of hot, the extraction changes, yielding the chocolaty, round aspect that we associate with cold brew. Even hot-brewed coffee has a higher viscosity when chilled, leading to a creamier, flatter mouthfeel.

Third-wave beverages have a slow deliberateness about them—latte art, four-minute pour-overs—but the cold-coffee experience is defined by speed and convenience. “With Stumptown’s draft nitro cold brew, you’re getting 12 to 16 ounces of cold brew, and people will suck that thing down,” Pilcher says. Many cold-coffee drinkers choose to bypass the café experience entirely, stocking up on cans of the stuff to throw in their gym bags or keep in the fridge at work. Blue Bottle, Stumptown, Café Grumpy, and La Colombe are among the dozens of brands producing packaged products to “meet consumers where they are,” as more than one specialty roaster put it to me, from jugs of cold brew concentrate to grab-and-go cans of Pumpkin Spice Draft Latte. Ready-to-drink coffee is now a $3.4 billion category, according to Euromonitor, and has grown by 31 percent in the past two years alone. In 2016, La Colombe invested in a bottling facility capable of turning out a billion cans of coffee each year.

Each of coffee’s first three waves has brought with it a new cadre of industry players, and the fourth wave is now producing a new gang of cold brew specialists who share as much in common with craft beer brewers as with the café-based roasters that preceded them. Among the category’s first was Grady Laird, who started making cold brew while working in GQ’s print production department. Laird’s homemade brew caught on with his colleagues, and before long, he was doing cash transactions up and down the Condé Nast elevator bank. In 2011, he began marketing Grady’s as a bottled concentrate; last year, the company sold over 5 million servings of cold brew.

A Grady’s cold-brew kit for home

Laird sees convenience as one of cold brew’s prime advantages versus classic hot coffee. “For hot coffee, you have to brew it every single time,” Laird said. “With cold brew, you have this bottle in your fridge, and you can go and pour yourself a cup instantly.” Because cold-brewed coffee doesn’t contain the same volatile oils as coffee brewed hot, it stays fresh in the refrigerator for weeks.

Beyond the convenience factor, though, Laird thinks cold coffee is simply more versatile than the hot version—a thirst-quenching session beverage that can be sipped throughout the day. As people turn away from soda and energy drinks, he believes some of them are filling that void with cold coffee, which provides a jolt of energy without the sugar and additives. “You’re not going to slam a big hot coffee before a workout,” Laird reasons. “With cold brew, the ingredients are very simple. You can pronounce everything.”

This tonal shift from third-wave coffee culture, with its luxuriant brewing rituals and sourcing esoterica, is a common thread within the cold-coffee scene. “It isn’t about you coming in and me telling you everything about natural processing in Yemen,” Carmichael says. For him, this newfound levity has been refreshing; the coffee beans are still sourced to the same exacting standards, but there’s less one-upmanship, less squabbling within the industry about purity and authenticity. “We would get in knockdown drag-outs about the definition of a cappuccino,” he says. “Now it’s no longer this weird kind of knife fight between my acumen and yours.”

When I ask Carmichael if he sees cold coffee as a whole new wave, as I have begun to, he recounts a trip he once took to a tiny island south of Fiji. Carmichael and some friends set out in a small fishing boat overnight; in the morning, when they returned to the island, they saw that the shore had been decimated by a tsunami. Nobody in the group had felt it, and they reasoned that the wave had been so big, and so deep, that the ocean simply lifted them up and dropped them down without anyone taking notice. Cold coffee, he says, reminds him of that. “The other waves, you felt them while they were happening,” Carmichael says. “With cold, it was a pent-up desire. That fault line has been sitting beneath the sea for a long time.”

Elizabeth G. Dunn is a journalist based in New York City. Her work appears in The Wall Street Journal, Bloomberg Businessweek, Eater, and on the web site of the New Yorker.