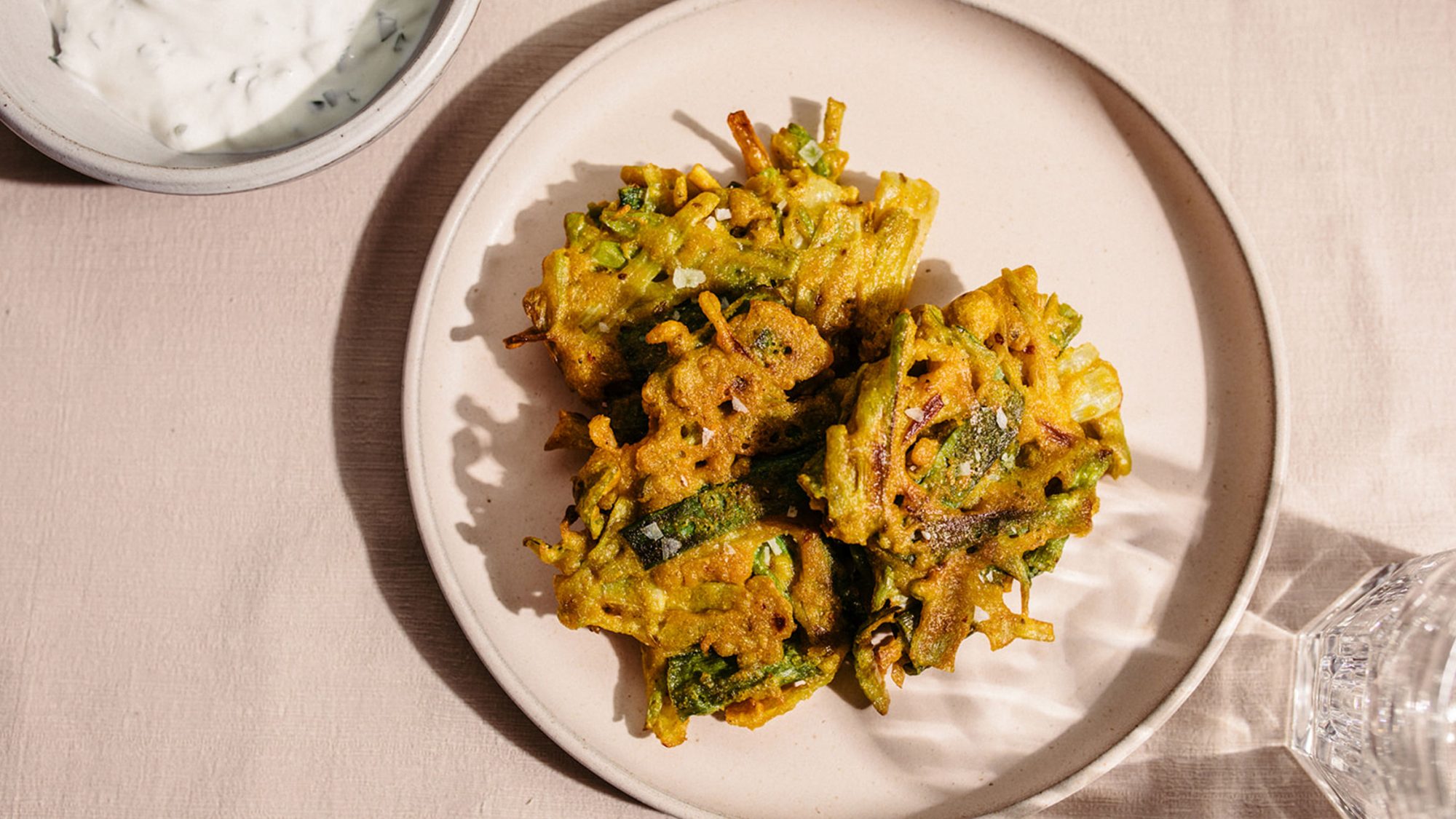 Whether a crispy socca or wispy spring onions, chickpea flour brings the crunch.

Here’s a PSA for all the chickpea fans out there: If you haven’t been cooking with chickpea flour, you’re missing out. The flour, which is made from dried, ground garbanzo beans, has a distinctly nutty flavor, with a light, powdery texture and a golden hue that’s accentuated in all types of cooking. And, like the versatile chickpea itself, chickpea flour has many uses. It can tightly bind ingredients, thicken soups and stews, and make batters that are perfect for frying to a satisfyingly golden result.

Chickpea flour, which is also known as cici, gram, and besan flour around the globe, is a boon in today’s world filled with gluten allergies and curious cooks looking to expand their repertoire of flours. Some savory pancakes, like socca in France and farinata in Italy, utilize chickpea flour in a batter with water that gets cooked in a hot pan in olive oil until the edges are crispy but the center remains soft and slightly creamy. In the South of France, delicious chickpea snacks called panisse are made with a batter that is simmered slowly until it’s thick and custardy. It’s then poured into a tray to cool and harden (like polenta), cut into shapes, and then deep-fried or pan-fried.

The flour, which is made from dried, ground garbanzo beans, has a distinctly nutty flavor, with a light, powdery texture and a golden hue that’s accentuated in all types of cooking.

In India, chickpea flour is used in savory crepes called pudla and in my favorite fried vegetable dish, pakoras. At Masala y Maíz, an Indian, East African, and Mexican cuisine–inspired restaurant in Mexico City, long strands of spring onions are dipped in a chickpea flour batter and fried. The onions become sweet and tender as they fry, cloaked in the batter, and they’re served in a long tangle with a variety of dipping sauces that my memory suggests might be a tangy turmeric raita and a hand-chopped salsa verde. That tangle of fried spring onions in chickpea batter inspired me to fry smaller, bite-size pieces of spring onions while I was working as sous chef at Zuni Café in San Francisco. I’d make a batter that combined chickpea and all-purpose flour and serve the onions with a fresh horseradish cream, cilantro salsa verde, or simply a squeeze of fresh lemon juice.

This recipe for spring onions battered and fried in chickpea flour is inspired by all of the above. I wanted the batter to have a little more body, so I added tapioca flour along with chickpea flour, and spices including cumin, chile flakes, and turmeric, for vibrancy and a citrus-like burst. Like cornstarch (which is a fine substitute), tapioca flour not only thickens the batter but also adds a light sweetness that works well with the spring onions. As you transfer the battered spring onions to the hot oil, you’ll want to make sure they’re flat, but also that the onion pieces are just tucked together so they singe and adhere to one another as they fry. The result is a fritter that’s incredibly light, delicate, and a bit akin to a pull-apart bread. I encourage you to rip off sections and dip them into thinned out sour cream speckled with parsley. These are definitely hand food, and they don’t need a fork or knife.