Get a free recipe
Subscribe
Chicken Without a Head
By: Jason Lee Brown Illustration: Annelise Capossela 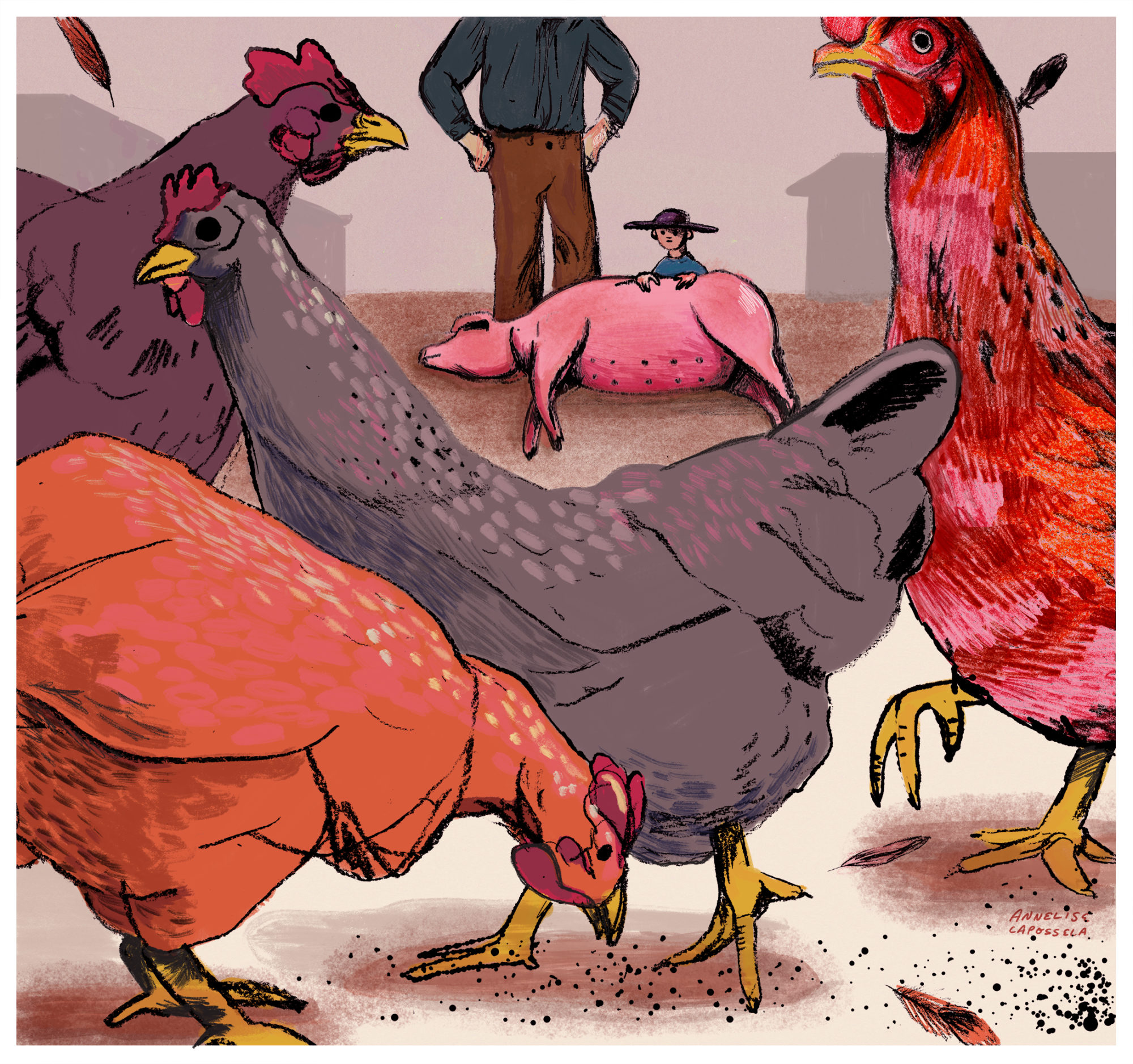 In this short work of fiction, a young boy learns how to butcher a chicken.

Pops told me I would be working with Farmhand today but Farmhand hadn’t showed yet. Farmhand’s name was Phil but I called him Farmhand. He liked that I was cocky and made nicknames up for everyone. He called me Schooney. Farmhand had worked for us for years and Pops always said we couldn’t find better help. I had been asking Pops to let me help with chores but was ignored, except for last month when he called me into the pig shed and sat me behind a pregnant sow. A stillborn was stuck in her sideways and she would die if we didn’t get it out. We couldn’t afford that. Pops said his arm was too big and lubricated mine with Palmolive. My fist pushed inside the dilated sow and she moaned. Wet warmth enclosed my forearm. My fingers felt something like teeth or bone and I grabbed, pulled. Bloody afterbirth strung from the lump cupped in my hand. It wasn’t until Pops raised the bucket he was holding that I knew what to do.

The first thing Farmhand said when he finally showed this morning was that his wife shouldn’t say he was running around like a chicken with its head cut off if she has never seen a chicken without a head. Pops asked him where he had been and Farmhand said he had to take her to St. Louis to see the doctor and that she was fine now. I waited for Pops to scold Farmhand but instead Pops said he could have two chickens to take home to her. Then Pops asked Farmhand if I could eat supper at his house tonight. Farmhand wanted to say no, but instead he asked me if I liked legs or breasts. “Both,” I said.

In the back yard, pans of ice water lined a table next to the concrete fire pit where water boiled in large buckets on an iron grill. Flames licked above the grill and firewood popped inside the pit. Pops handed me a small axe. He unlatched the door to a large cage made of chicken wire and grabbed the nearest bird. He stretched its neck across a wooden chopping block, its beady eye bulging at me. “As close to the head as possible.”

I chopped it clean. Pops said good job and patted my back. Before Mother’s car accident, Pops always praised me, but lately, when he was home, he only talked into the kitchen phone. The chicken flipped and flopped. Farmhand waited then grabbed the legs. He taped the ankles around a clothesline. We did four more like that.

After the first one drained, Farmhand dunked it into the bucket of boiling water with no-suds dish detergent, and stirred. The phone rang inside the house and Pops ran. It was that woman. Sometimes Farmhand and I called her Ring Ring. I had told Pops I didn’t want to meet her, nor did I want a younger sister. She started calling after Mother’s funeral and hadn’t stopped. Twice this week, I had to eat supper at Farmhand’s. And Farmhand’s wife can’t cook, not like Mother could.

“Chicks are cool,” Farmhand said. He spit chew into the grass and chuckled, wiped the string of slobber hanging from his lip. “Just don’t marry ‘em straight out of high school.” He raised the chicken, scalding water dripping in the bucket, and plucked a feather from the leg. “She’s ready.” He laid the bird on the table and madly pulled out each feathers. “Ever done this, Schooney?”

I shook my head. “I love chopping heads off.”

Farmhand grabbed a large kitchen knife and sliced down the back between the bird’s shoulders. “Don’t cut the gullet or windpipe,” he said. He grabbed the neck and twisted it free before dropping it in a pan of ice water. He pushed a finger along the side of the stub and softly freed the craw. “Look, she just ate.” His fingers split open the sack and corn kernels spilled out. I wondered what Pops could be talking about for so long. Pops never said more than a few words to Mother, other than what needed to be done around the house or what he wanted for dinner.

Farmhand stripped the gullet and windpipe from the skin, then wiggled his finger alongside the backbone. “There’s a trick to the heart. You have to work it loose before you cut it out.” His hand disappeared into the body and took out the gizzard and intestines. He wrapped them like a hose around three metal hooks that lined the back of the workbench. “You watching?”

“Nothing fazes you, does it, boy?” Farmhand held up the blade. “You wanna help?”

He handed me the knife, and on his instructions, I cut loose the heart and tossed it on ice. I knew Pops wasn’t coming back to help. He would talk until it was time for dinner. Farmhand took back the knife and removed the liver from the gall bladder and the intestine from the gizzard and plopped them in ice water. Emptying the gizzards while the other pieces chilled, Farmhand told me his parents had too many kids and that he had a younger sister who always got what she wanted while he got nothing. He spit chew into the fire and made it hiss.

At Farmhand’s, I sat across from the wife. Though the oven had just been turned off, the kitchen was freezing. The table was set with corn on the cob, mashed potatoes, green beans, deviled eggs, and buttered bread. But instead of breast and legs, we had gizzards and neck. On his way to fetch a beer from the fridge, Farmhand kissed his wife’s cheek and said something in her ear about being better off. She pulled away like I did once when Mother tried to kiss me after a T-ball game. Earlier while Farmhand and I washed up for dinner, he told me to compliment her cooking, so when he reached for a deviled egg and she slapped his hand away, I said the food looked like it was going to taste great. Farmhand laughed but his wife didn’t.

“He been talking about me?” she asked.

She looked at me hard. I didn’t care if Pops had Ring Ring in the car with him or not, I wanted him here, now. To take me home. I saw the axe chopping down over and over until I turned to the wife and said, “Don’t marry chickens straight out of high school.”

“I knew it!” she said. Her arm flailed and knocked the tray of deviled eggs off the table onto the floor. She stood without taking her eyes off Farmhand. He stepped back as she squatted on her heels in front of the mess. She cried and scraped the eggs into a yellow and white pile. I studied my gizzards and neck, waiting for grace.

Jason Lee Brown is the author of the novel Prowler: The Mad Gasser of Mattoon, the novella Championship Run, and the poetry chapbook Blue Collar Fathers. He is editor-in-chief of River Styx, a multicultural literary and arts magazine based in St. Louis, and series editor of New Stories from the Midwest. He also coedited the poetry anthology The Book of Donuts.