Get a free recipe
Subscribe
Chefs and Their Complicated Recipes
By: JJ Goode Illustrations: Paige Vickers 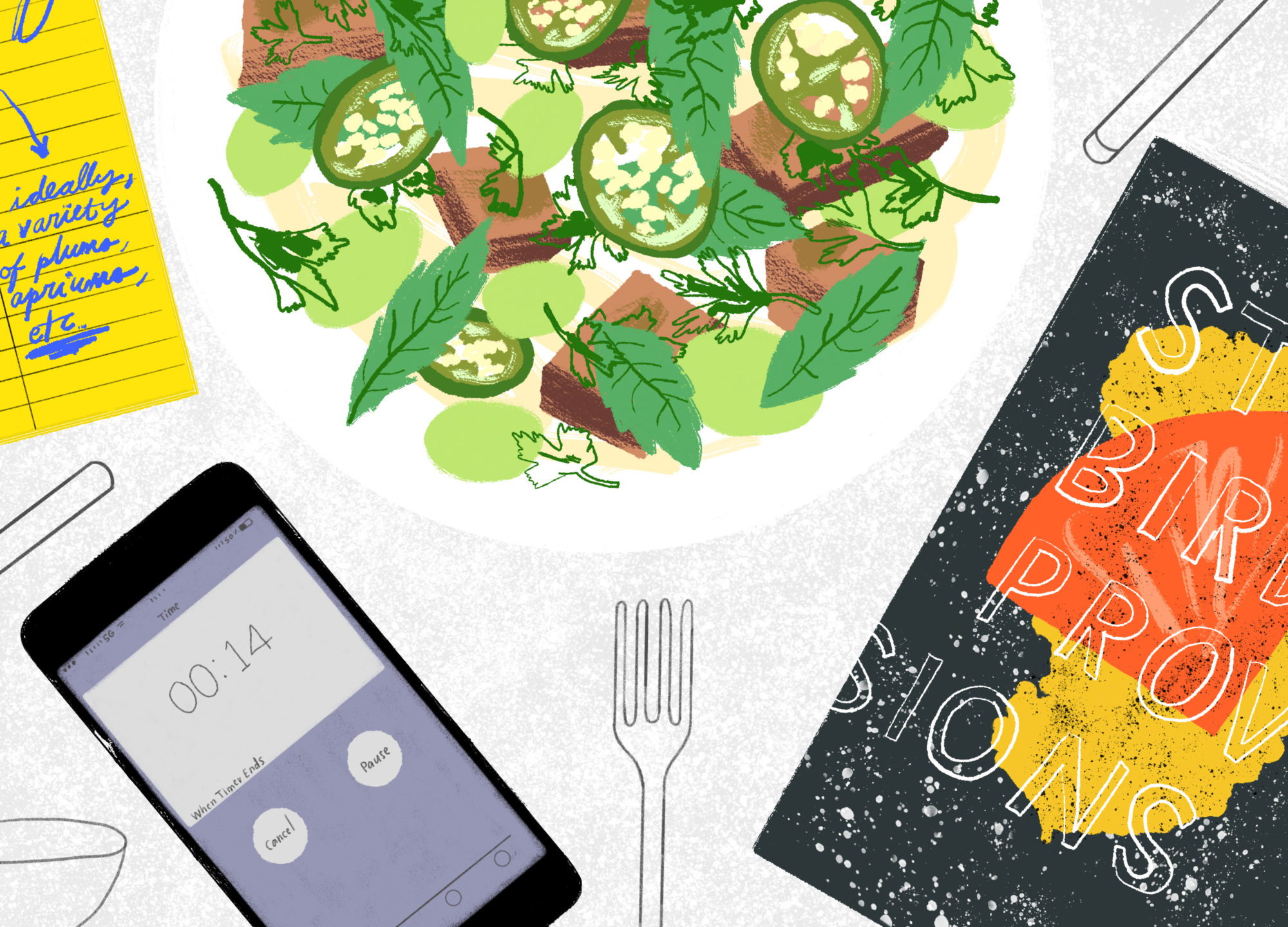 At home, a cookbook author plays loose with the recipes he works hard to write.

My phone is charged. My laptop is perched on the counter in the open kitchen of State Bird Provisions, in San Francisco. Like the cubes of pork belly that State Bird’s chef and co-owner, Stuart Brioza, is about to fry, the keyboard is also dusted with cornstarch.

I’m in ready mode, because in a matter of minutes, Brioza will show me how to make his pork belly salad with stone fruit. It’s one of only a few dishes at the award-hogging restaurant he runs with his wife, Nicole Krasinski, that has earned almost-always-on-the-menu status. At a restaurant whose menu changes as frequently as there’s fog in the Golden City, this makes it a must-include recipe for the cookbook we are writing.

As soon as the cornstarch-dredged belly meets hot oil, I start my phone’s stopwatch. As Brioza talks me through what he’s doing, I furiously hunt and peck, logging the particulars (his favorite brand of fish sauce to use for the dressing, the color and texture that indicate the pork is perfectly fried) that will ultimately add up to a useful recipe. When I sense Brioza is ready to plate the dish, which from experience I know will happen in a flash, I abandon typing to record video. Through my viewfinder, I watch him arrange golden cubes of pork and ruby-red polygons of plum on a white plate. He scatters on paper-thin slices of jalapeños and fresh herbs—mint, cilantro, and because he always seems to have some on hand, fronds of bronze fennel. He shakes a plastic squeeze bottle of dressing and readies it above the plate, while explaining his affinity for the combination of preserved fish and acidity, whether it’s the salt-cured anchovies and red wine vinegar in Caesar dressing or the fish sauce and lime juice in this one.

Before he douses the salad, he glances at me, smiles, and reaches for a measuring spoon. We’ve only been cooking together for a few days, but already he has benevolently agreed to convert the nebulous dashes and pinches of a practiced cook into more dependable teaspoons and tablespoons. He wipes the edges of the plate, a reflex, and finally I trade my electronics for my preferred apparatus, a fork. When I’m asked, I explain that my job is like an interpreter’s. I help translate the knowledge of savants like Brioza (and also Andy Ricker, April Bloomfield) to the language of laypeople like myself. But the best part of my job is indisputably this: Once he douses the salad in dressing, I will eat it. And not just “will”—“must.” I must eat it! Otherwise, how will I adequately help him describe its pleasures? My notes typically reflect details that I think might help home cooks recognize whether the recipe’s results have lived up to the chef’s intent. I might, for instance, observe that the dressing is tart and salty with just enough sugar for balance, not sweetness. That the pork is still hot, crispy on the outside and almost gooey inside. That the fruit’s sweetness and freshness provide relief, along with the dressing, from the belly’s richness. Sometimes I punctuate my memoranda with other comments. In this case, I type “Holy shit.” It’s so good that I immediately think to myself, I’m definitely going to half-ass this dish at home.

Like many chefs, Brioza is so adept at all this frying, slicing, and assembling that watching him work can convince you, for a moment, that you, too, can make food that inspires expletives. Yet even before he’s done, doubts seep in. My notes, after all, also include snippets of only-in-San-Francisco advice on stone fruit selection—“ideally, a variety of plums, apriums, etc.” It’s May, and for someone who knows he’ll return home to New York in a few days, the “etc.” is a knife in the gut. For someone who microwaves oatmeal and prefers buying cooked rice from his corner Chinese restaurant to the arduous task of combining two ingredients in an electric cooker and pressing a button, hearing how the pork is prepared is a twist of the blade.

The next morning, Brioza takes me through the method. Before the belly can be fried to order, it’s first brined for three days, which seasons its interior and tightens its texture. Then it’s braised for hours with aromatics and herbs, so the meat is tender and the fat luscious. Finally, it’s refrigerated overnight under a weight, so its thickness is uniform and it can be cut into perfect cubes.

Like many chefs, Brioza is so adept at all this frying, slicing, and assembling that watching him work can convince you, for a moment, that you, too, can make food that inspires expletives.

I aspire to be the kind of person who eagerly takes on this four-day endeavor, just as I wish I were the kind who makes his own sauerkraut and churns out pappardelle every Sunday. But I’m not. You might then think I’d resent the common chef-cookbook practice of including recipes that ask a lot of home cooks. I don’t. If chefs decide to share the way to their incredible food, I will happily chisel every signpost. I will scale down his vinaigrette from the gallon or so he burns through nightly to the cupful that a home cook requires for a dinner-party-size portion of pork belly salad. I will ask endless questions about brining, braising, and pressing. I will cram the instructions with so many details that he will justifiably ask me if they’re all necessary, and I will assign a professional recipe tester to cook the dish, often multiple times. And if in the process I have to eat pork belly salad again and again, I will make that sacrifice, for the good of the cookbook.

Somewhere, somehow, people with more ambition and courage than I have will spend days cooking from the books I help make. A week or two after the State Bird Provisions cookbook went on sale, Brioza told me that a woman sent him a photo of her successful attempt at his recipe for guinea hen dumplings, which with its game bird confit filling, hand-rolled wrapper, and laborious broth is the hardest recipe in the book. Andy Ricker of Pok Pok, a chef I’ve collaborated with on two books, forwarded me a PDF from an Icelandic couple that depicted a re-creation of every recipe in his first cookbook, a feat they managed in Reykjavik. I write for people like them, not people like me.

I might not be keen on concocting multicomponent appetizers, but I do know the sense of triumph that comes from following a recipe, however simple, and serving something better than anything you made before. Brioza’s food is so good, and his recipes lead you to such great heights of deliciousness, that you can jettison the difficult part—even when that part is the centerpiece of the dish—and still eat something skyscrapingly tasty. So here it is, State Bird’s pork belly salad, without the belly.

Tart, sweet, and meaty, this dish is a “salad” only because that’s the word we foist on even vaguely Southeast Asian dishes that feature fresh herbs and dressing. Here, that dressing is unchanged from Stuart Brioza’s, perhaps his cookbook’s easiest recipe and so perfectly calibrated that it has become my secret weeknight weapon. Instead of high summer’s bounty of plums, pluots, and apriums, I call for grapes, which are always available and almost always taste good no matter the season, though sure, use any tasty fruit you want. Nectarines would be great. So would citrus with the skin and pith carved off and the flesh sliced into rounds. With Brioza’s magnanimous blessing, I have replaced the brined, braised, and deep-fried belly with smallish pieces of pork shoulder browned in a pan. It’s perfect for those of us who like meat with some chew and without a four-day game plan.