Get a free recipe
Subscribe
The Chef Revolution Started at Home
By: Andrew Friedman 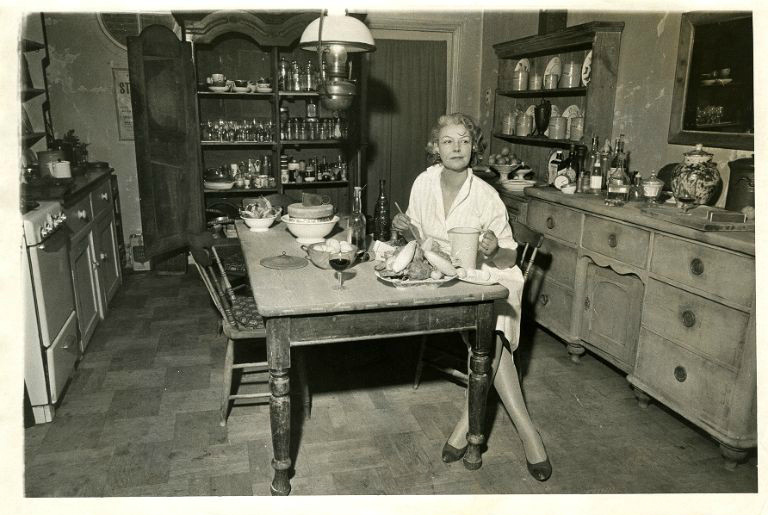 How home cooking and cookbooks of the ’70s and ’80s—along with Michelin and Bocuse—helped inspire the American celebrity-chef boom.

The late Judy Rodgers, whose Zuni Café remains a treasured San Francisco restaurant to this day, spent a formative year living with the legendary Troisgros family in Roanne, France, from 1973 to 1974. Though she often observed the inner workings of the kitchen at the family’s three-Michelin-star restaurant and occasionally performed rudimentary tasks there, it was the staff meals that resonated with her, as well as the Burgundian recipes she learned at the hand of the frères Troisgros’ sister, Madeleine Troisgros Serraille, at her home. For anybody who has eaten at Zuni, or cooked from Rodgers’s rightfully classic 2002 cookbook, this makes perfect sense: Though unmistakably professional caliber, her repertoire—including a chicken paired with a frisee salad dressed with a vinaigrette made with fat from the roasted bird’s drippings—offers the hug of home cooking more than the strut so often associated with restaurant food.

Rodgers’s early preference for home cooking and the style of food she would become known for as a chef speaks volumes about the differences between the northern California sensibility and that of, say, Chicago or New York City. For many pioneering American chefs of the Bay Area in the 1970s and 1980s—an era recounted in my new book, Chefs, Drugs, and Rock and Roll: How Food Lovers, Free Spirits, Misfits, and Wanderers Created a New American Profession—the guiding lights weren’t restaurant chieftains but French home cooking and the bistro staples that flowed from it, and cookbook authors who demystified and decoded the style of cooking. Richard Olney and Elizabeth David (pictured above) loomed large, as did Julia Child.

During those same decades, on the East Coast and in America’s Midwest and southern regions, most milestones on the American chef timeline involve professionals. Quick: Name a more transformational moment for those chefs than when Paul Bocuse, the recently departed Pied Piper of nouvelle cuisine, appeared on the cover of Newsweek magazine in August 1975, enrobed in starched whites, arms folded, a toque towering over his head, surrounded by copper pots, lobster, and pastry.

The cover story, “Food: The New Wave,” was a touchstone for a generation of young Americans who were turned on by cooking at a time before the profession was glamorous, or even reputable. Today, prepubescent cooks can compete on television, and a teenager can successfully operate a pop-up—signs of a chef’s elevated role in society. But it wasn’t until 1976 that cooks in this country were elevated above service workers by the United States Department of Labor. Bocuse’s appearance on the cover of a major magazine was a game changer, instantly conferring status on a traditionally blue-collar profession. A few years later, in 1978, there was the publication of Great Chefs of France, a celebration of three-Michelin-star restaurants outside of Paris and the rise of proudly American chefs such as Larry Forgione at the River Café. And there was the gradual shift in the Culinary Institute of America’s stature from a trade school to a launchpad to fame and fortune. But even to those who were inspired by these evolutions, good, old-fashioned home cooking, and the same resources called on by home cooks of the day (and still called on today), played a crucial role in the development.

It took Bocuse to nudge many of them into considering cooking as a career, but it took Child to turn many of them on to cooking in the first place. Sometimes home cooking went right on the menu, though not necessarily to the delight of the family: When New Orleans’s Paul Prudhomme demonstrated his jambalaya on his first-ever Today show appearance, one of his brothers scolded him for exposing the shameful “trash food” of the poor on national television.

On both coasts, and in between, the luckiest future chefs grew up in homes where cooking and a reverence for fresh ingredients and time at the table were woven into the fabric of daily life. It’s often said that Americans in the Eisenhower and Kennedy eras were raised on drab, industrialized home cooking, and that’s mostly true. But there are exceptions to any generalization, and the United States’ inherently immigrant culture also means that at any given time, a subset of young Americans experienced the culinary richness of their ancestry.

Italian-American families were an especially fertile breeding ground for these future culinary stars, with their backyard gardens, late-summer tomato-canning, and Sunday supper rituals. A young Forgione, who in addition to his creative influence helped develop a sourcing network on the East Coast, grew up eating Irish and Italian staples prepared by his grandmothers. Alfred Portale, still planted at the Gotham Bar and Grill after more than three decades, recalls many of the same traditions (the daily changing pasta on his dinner menu was directly inspired by his mother’s nightly offering at home), as does former Union Square Café chef Michael Romano, who grew up in an extended Italian-American family in East Harlem, where food was a part of every gathering. When he took over the kitchen of La Caravelle in midtown Manhattan—resolutely French under prior chef Roger Fessaguet—he began working pasta and risotto onto the menu, which proved a gateway evolution. By the time he migrated to Danny Meyer’s Union Square Café, he felt free enough that “I started doing Indian food, all kinds of crazy stuff,” he recalls.

By the same token, Narsai David, who would go on to open the influential Berkeley, California, restaurant Narsai’s, was raised in an Assyrian home in South Bend, Indiana, where he routinely helped his mother cook, and Victoria Wise (formerly Kroyer), Chez Panisse’s chef when the restaurant first opened, recalls that her father was originally from Armenia and cites his love of gardening and cooking as early influences.

Those without kitchen role models at home turned to the same resources that many home cooks did: books and one of the few television shows of the time. There were no shortage of Richard Olney freaks, among them onetime Chez Panisse chef Jeremiah Tower, who would go on to open San Francisco’s Stars, and David Waltuck, who had a nearly 30-year run at Chanterelle in New York City. And television’s Graham Kerr was a singular talent whose show The Galloping Gourmet blended a live studio audience, cooking demonstrations rooted in home cooking traditions, and travelogue footage into a deliriously entertaining program that drew the attention of many future chefs, including Jonathan Waxman and Tim Ryan, who today is president of the Culinary Institute of America.

But no figure more bridged the gap between home cooking and professional cooking (the future of American chefs) like Julia Child. Her television show, The French Chef, and books, beginning with the seminal Mastering the Art of French Cooking, functioned as a sort of “pocket” cooking school long before it would occur to most Americans to attend a chef “college,” as many of them referred to the CIA and other academies. Thomas Keller remembers his older brother Joseph, also a chef, watching both Kerr and Child. “They made the skills accessible,” says Keller, who didn’t watch the shows himself. “This is a chef’s knife; this is how you use it.  If you make a mistake, don’t kill yourself. They were both very approachable. They were both dynamic.” Julia Child in her home kitchen in France

Generations before Julia Powell found Internet fame, and then book and movie deals with Julie and Julia, in which she cooked her way through Child’s books, many aspiring American chefs did the same. The subtitle of Powell’s book, “365 Days, 524 Recipes, 1 Tiny Apartment Kitchen,” echoed the adventure of Bob and Karen Pritsker, who more than three decades pre-Powell taught themselves to cook out of Mastering the Art of French Cooking (volumes 1 and 2) in their Back Bay apartment. They later opened their Dodin Bouffant restaurant in Boston (eventually moving it to New York City), as did the late Michael Roberts of Trump’s restaurant (no relation to the current commander in chief) in Los Angeles.

And before he took his first cooking class, a young Jonathan Waxman—who would go on to cook at Chez Panisse and became famous as chef of Michael’s Santa Monica, and whose signature roast chicken is the only rival to Judy Rodgers’s between U.S. coastlines (both are still served today, Rodgers’s at Zuni and Waxman’s at his New York City flagship Barbuto and any restaurant for which he consults)—was a traveling saxophone player who cooked on the road out of a copy of Child’s masterwork gifted him by his mother, who had cooked from it in their family home.

The American chef revolution made celebrities out of kitchen grunts, turned once-menial work into a potentially lucrative pursuit, and altered how we eat. Restaurants were the stage on which those metamorphoses played out, but regardless of who prepared it or where it was served, when it came to inspiring cooks and to making food relatable, a funny truth persisted, and still does: There’s no place like home.