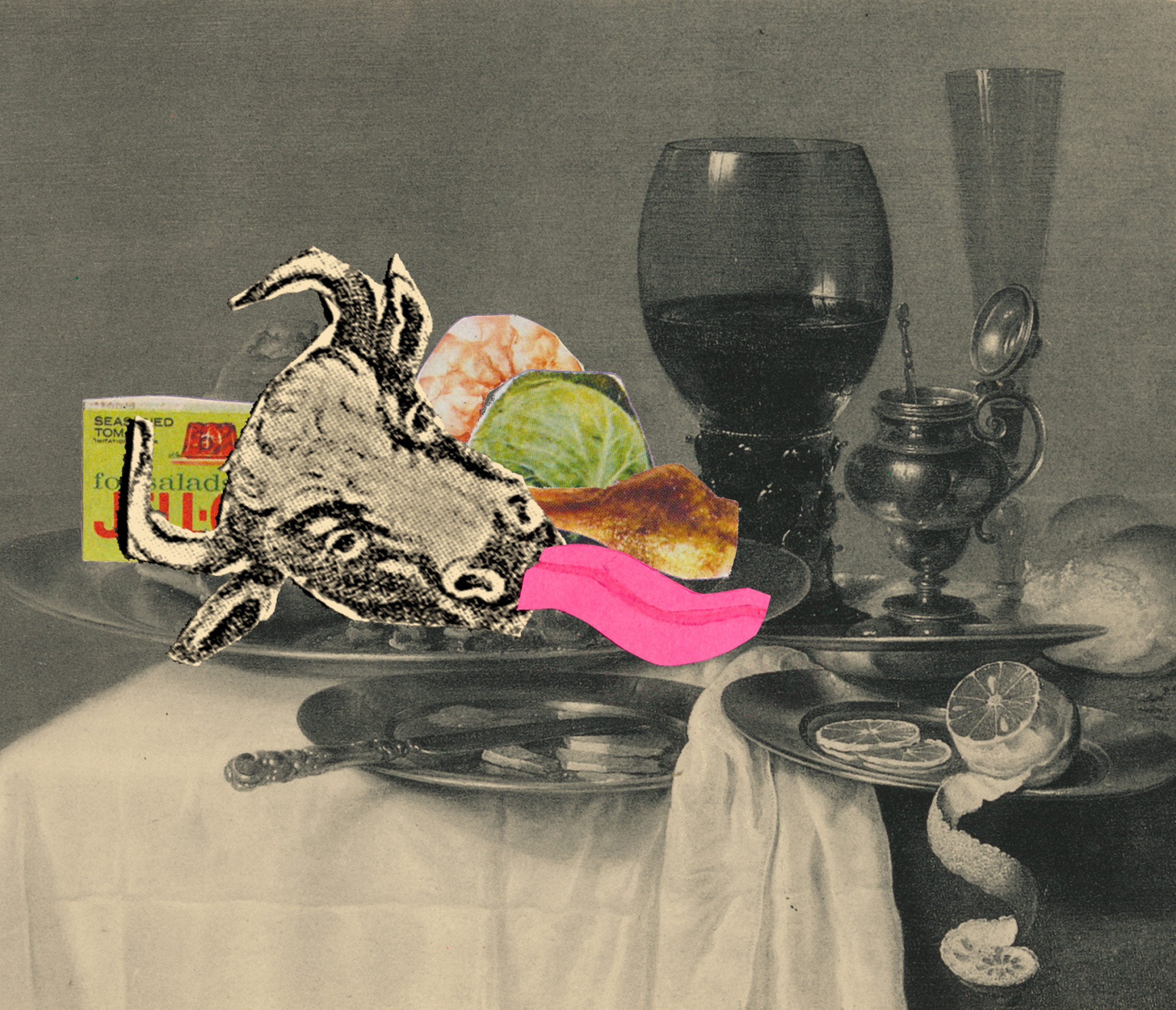 Today we have cakes that look like hamburgers thanks to Pinterest and “spherified olives” thanks to Ferran Adrià, but chefs have been amusing diners with culinary wizardry for centuries.

Eighteenth-century English writer and gastronomic enthusiast Samuel Johnson wrote that “[o]ur brightest blazes of gladness are commonly kindled by unexpected sparks.” This is revealed in our love of a gustatory curveball—the enduring gag of foods presented to look like other foods. Today we have cakes that look convincingly like bowls of ramen and brownies that have been funneled into and baked inside eggshells. But history is full of these confounding creations, from cheeseballs hidden within heads of iceberg lettuce to the classic turducken. These are “mystery” foods. They’re served “in disguise,” or “en surprise,” and they’re a riot.

This particular brand of culinary bedazzlement goes back to at least ancient Rome. By 30 B.C. the poet Horace was already completely over it, whinging in Satires that “few care for carving trifles in disguise/or that fantastic dish, some call surprise.” But it kept going. Famous for its lack of chill, the medieval era had culinary stunt work locked down. In Du Fait de Cuisine (1420), a fully plumed peacock skin, neck outstretched and tail fully spread, is stuffed with the much tastier meat of a roast goose as a “lofty entremets”; guests would have been astonished to learn that their gleaming centerpiece was also the main course. Live birds were “baked” into pies (or served in prebaked pie shells) to captivate the court, as evidenced by nursery rhymes, a recipe dating back to the 1500s, and one very special episode of Game of Thrones.

With the Georgian era’s social reforms, culinary fanfare went from amusing royals to entertaining the family. Elisabeth Cleland’s A New and Easy Method of Cookery (1755) features a “calf’s head surprise” that resembles an ordinary sausage-wrapped calf’s head, its tongue distressingly lolling from its mouth. But then you slice it open, and ta-da! A “ragoo” of cocks’ combs, sweetbreads, truffles, and morels was there all along! Much delighted tittering ensues.

Desserts were no less enchanting. Alexis Soyer’s The Gastronomic Regenerator (1846) includes a dozen or so cakes “en surprise,” disguised as legs of mutton, whole boars’ heads and hams, even roast swans, just for kicks. One is a double whammy of excitement, calling for the cook to bake a cake disguised as a roast capon stuffed with glacéed fruit—it even instructs to glaze the cake with cochineal-tinted chocolate to get the right roast meat color. By the turn of the 20th century, this high-class mirth was within reach even for ordinary householders who lacked private chefs. “Eggs in Surprise” were a fun spin on a deviled egg, with recipes instructing cooks to slice off the bottoms of boiled eggs; remove, cream, and pipe back in the yolks from the bottom; then stand them upright before covering in some type of sauce to make them look like regular boiled eggs in gravy. But they’re stuffed! Gotcha!

The 1930s celebrated entertaining in the home, but the Great Depression’s impact on food availability encouraged housewives to creatively make do with less. Jazzing up the names of dishes was often critical to making a frugal recipe more fun, and sometimes the easiest way to do that was by simply calling a dish a “mystery.”

“Mystery” could jokingly pertain to foods of dubious provenance (e.g., “mystery meat”), but the word could also connote an unexpected ingredient, as in the case of “mystery cake” unleashed in 1932—the worst year of the Depression. A can of condensed tomato soup acted as a sweetener and egg-free moisture-maker, making the cake wildly popular during the era’s strict food budgeting and a decade later, during wartime rationing. “This is a pleasant cake,” wrote M.F.K. Fisher in How to Cook a Wolf (1942), “which keeps well and puzzles people while you are cooking other things, which is always sensible and makes you feel rather noble, in itself a small but valuable pleasure.”

Mystery salads first appeared in the 1910s and, like the cake, found a following during the Depression. Including “mystery” salad added panache to a dinner party menu. “Who’ll ever guess what makes these green-rimmed slices so delicately delicious?” asked a 1931 issue of Women’s Home Companion (spoiler: It was Jell-O).

Postwar, it seems that speed-addled housewives were making them simply because they were bored and the hot glue gun had yet to be invented. Sometimes these were “mysterious” thanks to the concealing properties of creamy dressings or Cool Whip—some recipes instruct the cook to literally frost a head of lettuce in mayonnaise. However, most still consist of random foods suspended in Jell-O. The canon relies on the monochromatic camouflage of canned stewed tomatoes trapped motionless within a Tabasco-spiked mold of raspberry Jell-O, then dribbled with sweetened horseradish. The real mystery is why anyone thought this sounded delicious.

Maybe Adrià’s reverse-spherified alginate “olive” is an attempt to reclaim surprises for royalty, but home cooks will always take joy in keeping their guests guessing the mystery ingredient in a chocolate cake (surprise! It’s mayonnaise). Just as our grandmothers duped their guests with sandwich loaves iced to look like tall, elegant layer cakes, we might punk our friends with meatloaf “tortes” decorated with piped mashed potatoes à la Martha Stewart. Life is always a little more interesting when things aren’t what they seem, when we say, “Surprise me.”