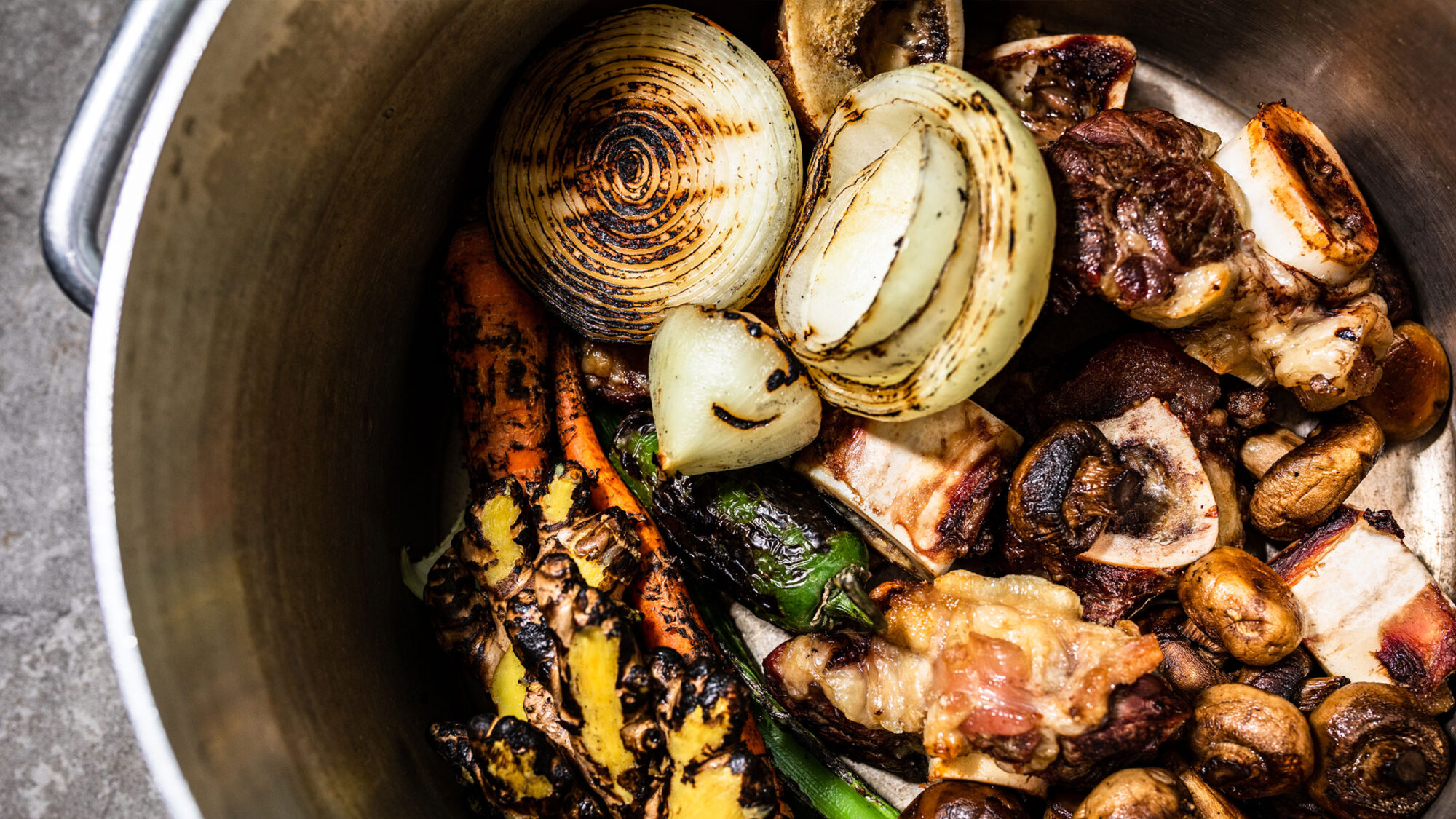 Whether scorching ginger root on the stovetop burner or grilling chicken before it hits the pot, the kiss of savory smoke is worth the extra step. A chef reveals his history with coaxing extra flavor from stock ingredients with the magic of fire.

They were the type of burners whose “low” setting meant high and “high” meant crazy blue flaming tentacles creeping all the way up the side of the wok. At Rice Paper Scissors, the Vietnamese-Californian restaurant where I worked for more than a year in San Francisco, we’d turn those perilous burners on high after lunch service to char whole mounds of ginger claws and spheres of onions right on top of the range for the restaurant’s popular pho broth. I’d use 18-inch metal tongs to flip the ginger over and over until it was blackened, almost ashy, and to turn the onions until they’d become crisp and begin to ooze their juices. We’d remove most of the ash with a kitchen towel, but we’d still leave the essence of burn before chopping them up and adding them to a large pot with beef knuckles.

These charred vegetables offset the rock sugar–sweetened beef stock that we’d simmer overnight with star anise, cloves, and cinnamon. In the morning, we’d strain it into a crystal-clear stock—which was then cooled in the walk-in so that the stock’s fat would solidify on its surface like ice on a frozen lake. The next day, we’d scrape that fat away and “go fishing” for that clear and clean gelatinous stock. We’d season the broth with fish sauce, then keep the stock on a low simmer during service, ready to cook sirloin and warm fresh, pillowy rice noodles to order. The broth’s steam exhaled this spiced aroma that was reminiscent of chai but beefier. The flavor was deeply savory and sweet, with hints of fire that tasted like steaks caramelized over a campfire, gingerbread, and ever-so-slightly brined with fish sauce. A sip would be enough to convince anyone to burn—yes, burn—their stock ingredients before they hit the pot of water.

A sip would be enough to convince anyone to burn—yes, burn—their stock ingredients before they hit the pot of water.

A few years later, working at Zuni Café, which had a wood-burning oven, I found myself with anywhere between 50 and 80 fully cooked, roasted chicken backs after a day’s service. When I didn’t want to just nibble on the flavorful meat, I’d sometimes make a very chicken-y and smoky stock by grilling those already cooked backs over mesquite charcoal until they were fully browned and even spiked with bits of black char. It made for a satisfying roasted and grilled broth that tasted multidimensional—like the essence of a grilled chicken thigh and a succulent whole roasted chicken at the same time. Once I cooked some penne in it and added chopped Swiss chard for a soup that was deceptively simple but wildly flavorful. At home—and only at home—I’ve played with already spent pork rib and pork chop bones from dinner. Roasting those bones in a high-heat oven crisps and chars any leftover meat and cartilage to make a perfectly porky stock for cooking borlotti beans. The goal of burning your stock on purpose, generally, is to transform the broth by deeply caramelizing whatever you’re charring, which concentrates flavor and adds depth and a hint of fire. But whatever you’re charring should be left with a soul and still be recognizable. If you’re burning a piece of carrot, for example, there should be a balance between the bitterness of the ash and the vegetable’s natural sweetness. I recommend lightly pre-charring whatever you plan on burning, adding it to a pot, simmering it, tasting it, and adjusting it next time as you see fit. Also, invest in a fine mesh strainer so that you can carefully filter out any larger pieces of ash that may offset this balance.

Ginger and onion char well over the stovetop because they are dense and can stand up to direct flames. Other vegetables that can stand up to this type of heat are going to be sturdy and hearty, like whole or halved heads of cauliflower and broccoli, stalks of celery, or large carrots. The carrots will caramelize, adding sweetness but also a little bitterness, while the cauliflower and celery will add deep vegetal flavors for a vegetable stock made with few ingredients. These types of vegetables make for a great stock with the addition of aromatics like rosemary and dried chile pods.

Charring doesn’t have to happen over the stovetop, and for some small or leafy vegetables, it makes more sense to char them in a hot pan or in an oven on a sheet pan, tossed with a little oil. You can try roasting vegetable scraps, like leek tops, chard stems, and broken bits of cremini mushrooms, at a medium-high temperature until they’re crispy and dark, then add them to a pot of water with a sheet of kombu and a handful of bonito flakes for a dashi-style stock. If you taste the stock and it still needs a touch more umami, you can swirl in a small spoonful of miso.

Thick wedges of tomatoes, big poblano peppers, halved heads of garlic, and even those frozen Parmesan rinds can be oiled and grilled over high heat until they’re blistered and black.

If you have a grill—preferably charcoal, because of its smoky qualities—the possibilities for making a charred stock open up even wider. Thick wedges of tomatoes, big poblano peppers, halved heads of garlic, and even those frozen Parmesan rinds can be oiled and grilled over high heat until they’re blistered and black. You can place those vegetables and cheese ends in a pot, cover them with water, season them with salt, and simmer them until you have an incredibly spicy, garlic-forward tomato stock that you can use for a Minestrone-type soup or to braise beef short ribs.

For a charred chicken stock like the one I used to turn into brothy penne soup, you can grill a whole four-to-five-pound chicken that’s been cut into parts (or even just a package of chicken wings) until it’s deeply browned, crisp, and burned in some places before adding it to a Dutch oven with star anise, clove, cinnamon, and about five quarts of water for a light chicken broth that’s sippable straight from the bowl, and so transformative—like you’re drinking the essence of coziness in an imaginary plush armchair next to a large fireplace. It’s warming, smoky, and rich. A bowl of this with a squeeze of lemon, tender poached chicken, and just-steamed rice yields a fuller-flavored chicken and rice soup to soothe the blues of winter.

If you’re feeling adventurous and you have a wood-fired fireplace, you can even try (with caution) charring whole vegetables and pieces of meat directly on coals. Just toss whole onions, leeks, or globe eggplant, still in their skins, into the embers. Once they’ve been charred all over, cool them off and gently rub away the burnt outer layer of skin.

As a child, you’re told not to play with fire, and even as a young cook, the first thing you learn is that burning things is bad. But I’m wiser now, I cook a little slower, and I’m more attuned—just like a good charred stock should be.