Get a free recipe
Subscribe
Caul Me by Your Name
By: Edith Zimmerman Photos: Jenny Huang 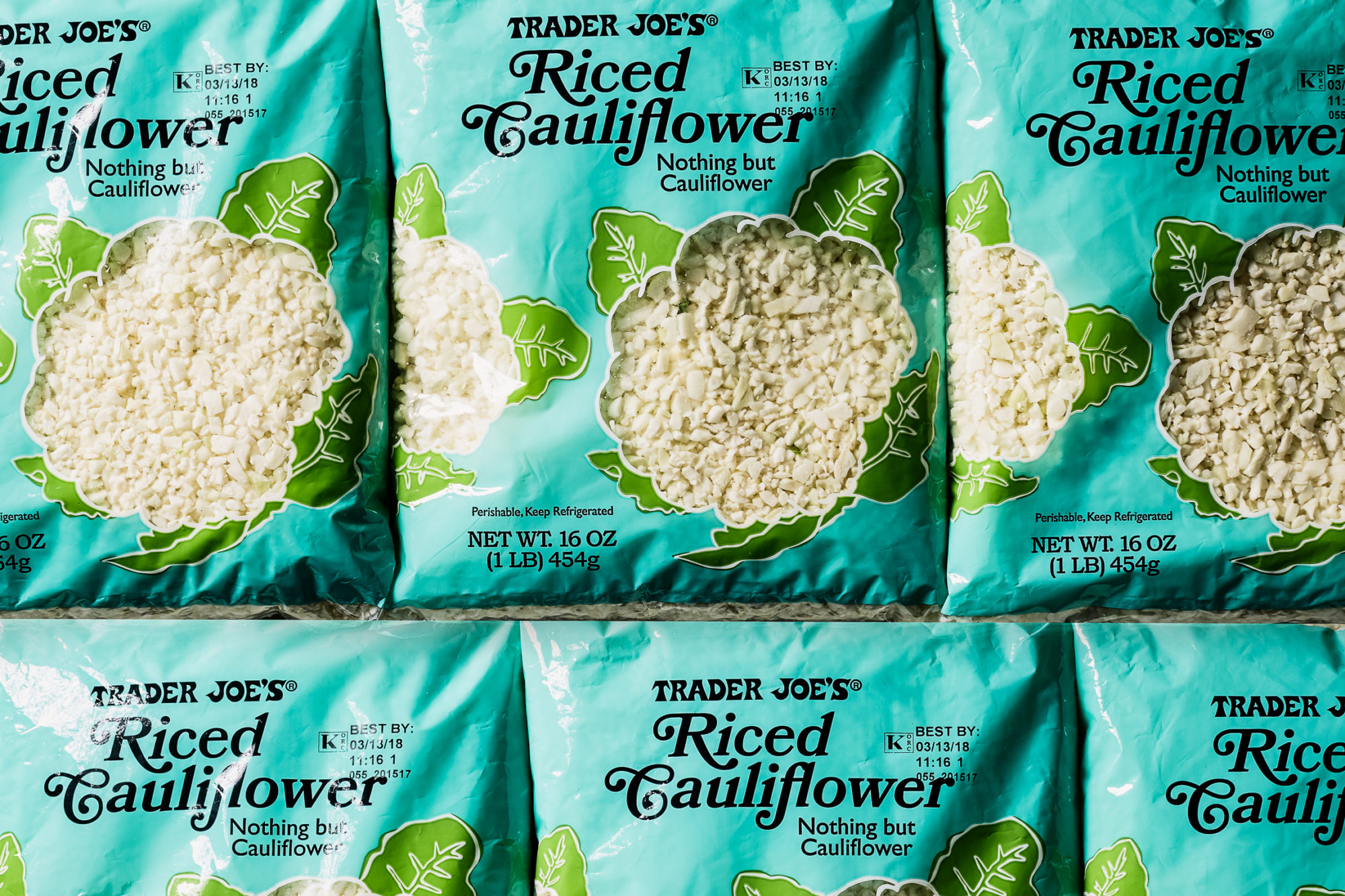 A “malicious and nefarious” grain alternative has got millions of home cooks excited—and corporate flacks and lobbyists a little steamed. But does the rice industry really have anything to worry about?

In the spring of 2017, the rice industry issued a statement calling for cauliflower rice, a chopped-up version of the vegetable that’s popular among low-carb and paleo eaters, to call itself something else. “Only rice is rice,” said the president and CEO of USA Rice, Betsy Ward. “Vegetables are vegetables, and they shouldn’t try to pretend they are anything else. We may be asking the FDA and other regulatory agencies to look at this.”

News outlets picked up on the story—treating it largely with amusement—and it gained traction on the Internet. “Cauliflower rice is freaking out the rice industry,” read one Quartz headline. The media dominos continued to fall. Vice: “Big Rice Is Very Mad About Cauliflower Rice.” Fox News: “Why the rice industry hates this healthy new food trend.” The Packer: “Rice group steamed over cauliflower products.”

It was easy to understand the impulse to laugh at what seemed like the rice industry’s tone-deaf overreaction. On the surface, there is something almost touchingly uncool about it, like an anxious dad being flustered by a new form of slang. From a distance, it seems kind of silly—a massive industry like rice ($2.4 billion in 2016) being bothered by one like cauliflower (which brought in $390 million in 2016). But for the people who make their living in rice—including rice lobbyists as well as rice farmers in California and Arkansas (our nation’s leading provider)—the incursion is serious business. Cauliflower, a vegetable that has become a favorite of millennial, paleo, anti-grain low-carb eaters (although rice has always been gluten-free) for its versatility and low calorie count, has been trying to take a bite out of the rice industry since…well it’s hard to say when, although I’ll get to that in a second.

Although cauliflower rice’s popularity can mostly be pinned to the rise of the paleo diet—which itself began with gastroenterologist Walter Voegtlin’s 1975 book The Stone Age Diet—it rose to mainstream prominence with the 2002 publication of exercise scientist Loren Cordain’s The Paleo Diet and the books and websites that recommend using cauliflower instead of rice. Various marketing campaigns—including Green Giant’s “Move Over, Rice” and “Reimagine Your Rice”—have been straightforward in their intentions. And if any vegetable can masquerade as rice (and Green Giant has a whole line of them, including riced beets and riced kohlrabi), it’s conceivable that the rice industry could be in trouble. But are people really mistaking a vegetable for a grain? Or is this all some kind of head game?

I emailed USA Rice via its general inquiry line and heard back from spokesman Michael Klein within minutes. We set up an interview over the phone for a couple days later. “It’s a bit malicious and maybe nefarious,” said Klein. “Is it hurting our reputation if you’re giving kids cauliflower rice and calling it fried rice—fried cauliflower rice—and kids don’t like it, and they have a negative connotation about rice?” Klein added. “That’s something that we have to think about.”

The industry’s main concern is not the term “riced cauliflower” but “cauliflower rice”—which may seem like a small difference but could be the difference between one being mistaken for the other. “We aren’t thrilled with ‘riced,’” Klein wrote me in an email. But he recognizes “ricing” is a viable process. “Obviously, riced cauliflower, while it may make us uncomfortable, there’s nothing wrong with that. There’s a kitchen tool called a ricer, and things are riced.”

As far as I can tell, cauliflower rice was invented in 1998 by Harrison Ford’s son, Ben Ford, a chef in California. Except he called his creation cauliflower couscous: “Chef Govind Armstrong and I were working on a lamb dish,” he told an Australian food magazine. “Like all great ideas, it just happened spontaneously.” In 2010, chef Eric Ripert covered the dish for his show, Avec Eric. The term “cauliflower rice” began to gain momentum online in 2012, and “riced cauliflower” has been on a steady incline since January 2016. I asked Ben Ford if he intended for the dish he made to be eaten as a carbohydrate substitute, or if he ever imagined cauliflower rice would become the thing it is now. “No,” he clarified in an email. “We were just trying to make a great lamb dish.”

Cauliflower, a cruciferous vegetable in the brassica family—and technically the same species as broccoli, Brussels sprouts, cabbage, collard greens, and kale—is a nutritional powerhouse grown mostly in California in the United States. A cup of chopped cauliflower provides about 85 percent of our recommended daily vitamin C intake, about 10 percent of daily recommended fiber, a significant amount of potassium, and, notably, only 5 grams of carbohydrates (1 percent of daily intake) and 25 calories. Meanwhile, a cup of cooked white rice has 200 calories, 45 grams of carbs (15 percent of suggested daily intake), 4.3 grams of protein (8 percent daily intake), and negligible amounts of vitamins and minerals. It’s clear, beyond a single animated lobbyist answering a reporter’s phone call, that the rice industry has taken notice—and isn’t taking any chances. Arkansas state representative Blake Johnson has also been calling on the FDA to officially define rice through a formal Standard of Identification (SOI), using the grain’s official Latin name, and thereby exclude “rice pretenders”—meaning that only products that contain actual rice, Oryza sativa L., could be marketed with the word “rice.” Some food products have similar designations (tamales, jam, macaroni, whisky), but others don’t (milk, noodles).

Milk, in particular, is something of a cautionary tale for the rice industry, as consumers have steadily switched to plant-based alternatives, cutting sharply into dairy industry profits. The rice industry hasn’t exactly objected to the marketing of rice milk, though Klein, the USA Rice spokesman, said the industry wasn’t being hypocritical, because what we think of as rice milk—which isn’t stocked in the refrigerated dairy section—isn’t actually called rice milk but Rice Dream. (To note, USA Rice doesn’t represent the rice farmers who make this product.)

I hadn’t tried riced cauliflower before this story—although I am a fan of mashed cauliflower—but I purchased two bags from Trader Joe’s (one fresh, one frozen) and cooked them both up on the stovetop with onions, garlic, red pepper flakes, butter, and olive oil. It was an easy, tasty, and accommodating dish. And although the cauliflower did at first seem like a sort of miraculous substitute—I can’t believe it’s not rice (what would the lobbyists say!)—after an hour or so I started to feel hungry again and wondered what I should actually eat. (For what it’s worth, I also just finished Michael Pollan’s Food Rules, and number 10—“Avoid foods that are pretending to be something they are not”—is fresh in my mind. Although he’s talking more about synthetic substitutes like margarine.)

Toward the end of my interview with USA Rice’s Klein, I asked him if he’d ever tried riced cauliflower (or cauliflower rice). “Ha,” he said. “You know, personally I have not had it.…[But] one of the women in our office had it. She was not particularly excited about it, but she did have it. So. I can’t comment on that. I do not have experience with riced cauliflower.” I ask him about his ideal name for this product—cauliflower rice, riced cauliflower, something else.

Klein suggested “cauliflower crumbles” as a fair compromise. “Whatever you want to call it,” he said. “Let’s put it in the vegetable section, the produce section, and keep it out of the rice aisle.”

Edith Zimmerman is a writer, editor, and illustrator living in Brooklyn. She runs the comics section Spiralbound, and she was the founding editor of The Hairpin.