Get a free recipe
Subscribe
A Well-Seasoned Cast Iron for a Perfect Sear, and a Better Family Story
By: Nicole Sprinkle Photo: Brown W. Cannon III 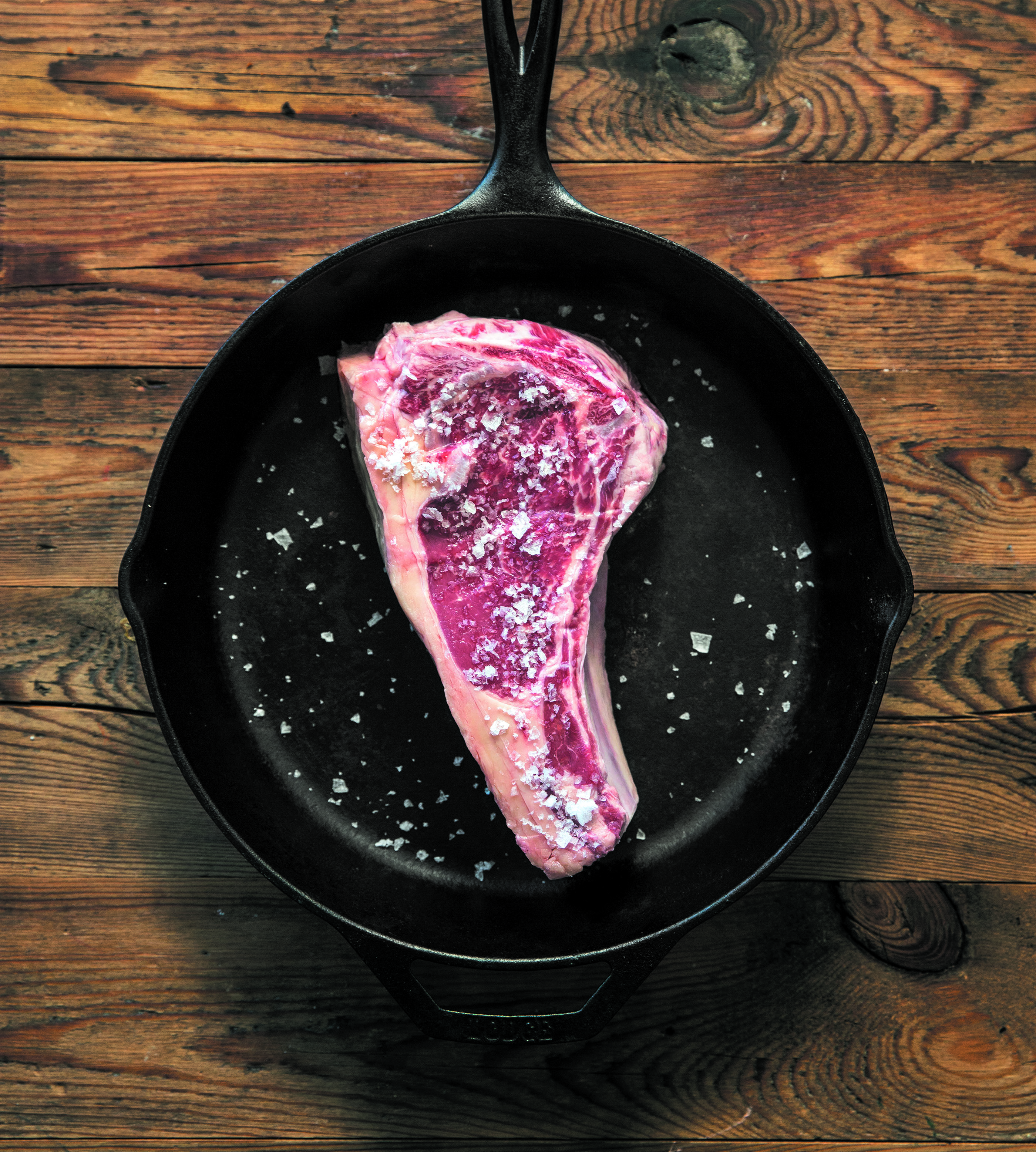 Sous vide machines, induction ovens, pressure cookers—technological gadgetry can be great, but for many chefs, there’s nothing like classic, lo-fi cast iron.

“It’s one of the best pieces of cooking equipment you can have,” says chef and cast-iron collector Joseph “JJ” Johnson of Minton’s in Harlem. “Cast-iron pans aren’t getting made at a rapid pace…we’re not seeing them on shelves in stores. When you ask someone, ‘Where did you get that?’ it’s usually ‘From my grandmother.’”

That wasn’t always the case, though, says Charlotte Druckman, the author of Stir, Sizzle, Bake: Recipes for Your Cast-Iron Skillet. During the first half of the 20th century, cast iron was “big business” in the U.S. (before steel usurped it), on par with the denim and auto industries; the largest manufacturers were Wagner, Griswold, and Lodge. In fact, Druckman used a new $15 Lodge skillet to test many recipes in her book.

Personally, however, Druckman says she favors older, vintage skillets—which she seeks out on Etsy—because they’re worn in and have a great patina, boasting a smoother finish than modern cast iron. “The models aren’t sanded down the same, and they’re preseasoned, so they have a sort of slightly gravelly texture,” she says. (She’s referring to the continuous oiling of vintage skillets, which is done in order to build up a layer of polymerized fat that’s water repellent and protects the pan from both rust and food sticking to it.)

Johnson also searches for the more durable antique pieces when he goes to Vermont or upstate New York. He’s had a pan for 10 years that he’s incredibly attached to, despite his girlfriend’s skepticism. “She laughed at me and brought out her stainless steel,” he says, adding that he refused to give in. “I bought it new, seasoned it myself, and don’t scrub it. I’ve cooked a lot of great meals in that pan and set off the fire alarm in my building a lot.” Johnson says he cooks all of the fish at his restaurant in it, as well as cornbread and banana bread. Anya Fernald, a sustainable-food expert and author of Home Cooked, agrees, saying there’s been a quiet renaissance of cast iron because it’s a forgiving way to cook and reflects the stripped-down way of cooking many chefs are returning to. “It’s simple, heavy, handmade stuff,” she says. “We’re nostalgic for that kind of simplicity after years of being marketed layers and layers of different metals in our fancy, new engineered pans.”

Her favorite cast-iron piece is a vintage chicken-fryer pan that she found at an antique shop. It’s small and deep, with tall sides that help keep spattering to a minimum. “I love that there used to be a pot just for frying chicken, and in lard no less. There were a lot of downsides to life in the 1930s compared to now—that’s not one of them.”

Irvin Lin, author of Eat the Love: Sweets for the Mouth & Mind, is crazy about cast iron, too. He bought his first pan in college and has hauled it around the country with him for the last 20 years. He christened the pan by making cornbread and has since used it to perfect signature desserts such as pluot cardamom upside-down cake and apple blackberry tarte tatin. “It’s well seasoned and just gets better and better with age. I can’t imagine ever giving it up. It’s an integral part of my kitchen,” he says.

But perhaps the best story belongs to Genevieve Ko, author of Better Baking: Wholesome Ingredients, Delicious Desserts, who received her first cast-iron piece as a wedding present: an eight-inch, flame-colored Le Creuset enameled cast-iron skillet. “After our wedding and honeymoon, my husband and I spent a fun day opening our gifts, including this heavy little box with the skillet. I fell in love with it right away, but we couldn’t figure out who sent it. We hadn’t registered for it because it seemed like such an extravagance, and there was no note or receipt,” she says. The company couldn’t track down the sender and suggested the couple keep it. “I’m so glad we did. It’s my daily workhorse. But it’s also a reminder of a magical time, when we were crammed into our tiny first apartment, feeling so loved by all the family and friends who celebrated our wedding with us,” Ko says, before adding: “The surface takes on a patina that seems to reflect the memories of breakfast eggs and steak dinners and blueberry crisps. Maybe I’m getting too sentimental, but that’s how I feel about my little pan. It took me from my honeymoon to two babies, then three. Now they’re almost in high school!”

To make this bistro classic in my kitchen, I use a cast-iron skillet or grill pan that I get really hot, and then I sear the steak on both sides, cooking it medium-rare, which is the way I like it. My preferred cut is entrecôte, or rib eye, and I ask the butcher to cut it into steaks that aren’t too thick since I like lots of surface area on my steaks. I rub them with chipotle chile powder to give them a bit of a smoky flavor. It’s difficult to say exactly how long it will take a particular steak to cook to your liking since there are so many variables, but there is actually no truth to the rumor that if you cut a steak open a little and peek inside, all the juices will come gushing out and your steak will be dry. In fact, the best way to ensure a steak is dry is to overcook it. So feel free to peek inside if you need to.

Among many baking superpowers, Alice Medrich can claim seeing into the brownie’s soul. Her thorough, ongoing investigation has yielded numerous recipes, none so famous as her New Classic Chocolate Brownies. The trick to these is to take perfectly undercooked brownies out of the oven and place the aluminum pan in an ice bath to stop them from cooking a second longer. But cast iron isn’t made for bathing. Plus, it holds more heat, and it holds it longer than an aluminum pan; once you pull it out of the oven, your batter is going to continue to cook, and at a higher temperature. To avoid depressingly dry, stiff, sad blocks, you need to calibrate baking time and wetness accordingly.

I keep the skillet in the oven for the least possible amount of time required to yield actual brownies as opposed to hot, soupy batter. If you’re struggling with the question of whether or not it’s ready and wondering if just maybe you should put the skillet back in for a minute or two, you’ve nailed it. Stop, walk away from the pan, and leave your brownies to cool. When they do, they’ll be perfect.

Note: These fudgy brownies are dark, skating dangerously close to bitter. If you’re at all gun-shy about the bitter factor, you can use fewer nibs (1/3 cup, or less), but I like to push it to the maximum, and I appreciate the crunch.

Nicole Sprinkle is the Restaurant Critic for Seattle Weekly and contributes to blogs at The Huffington Post, The New York Times, and other websites and publications. Look for her forthcoming story in Cherry Bombe magazine.