Get a free recipe
Subscribe
The Case for Unripe Mangoes
By: Ishay Govender-Ypma Photos: Linda Schneider 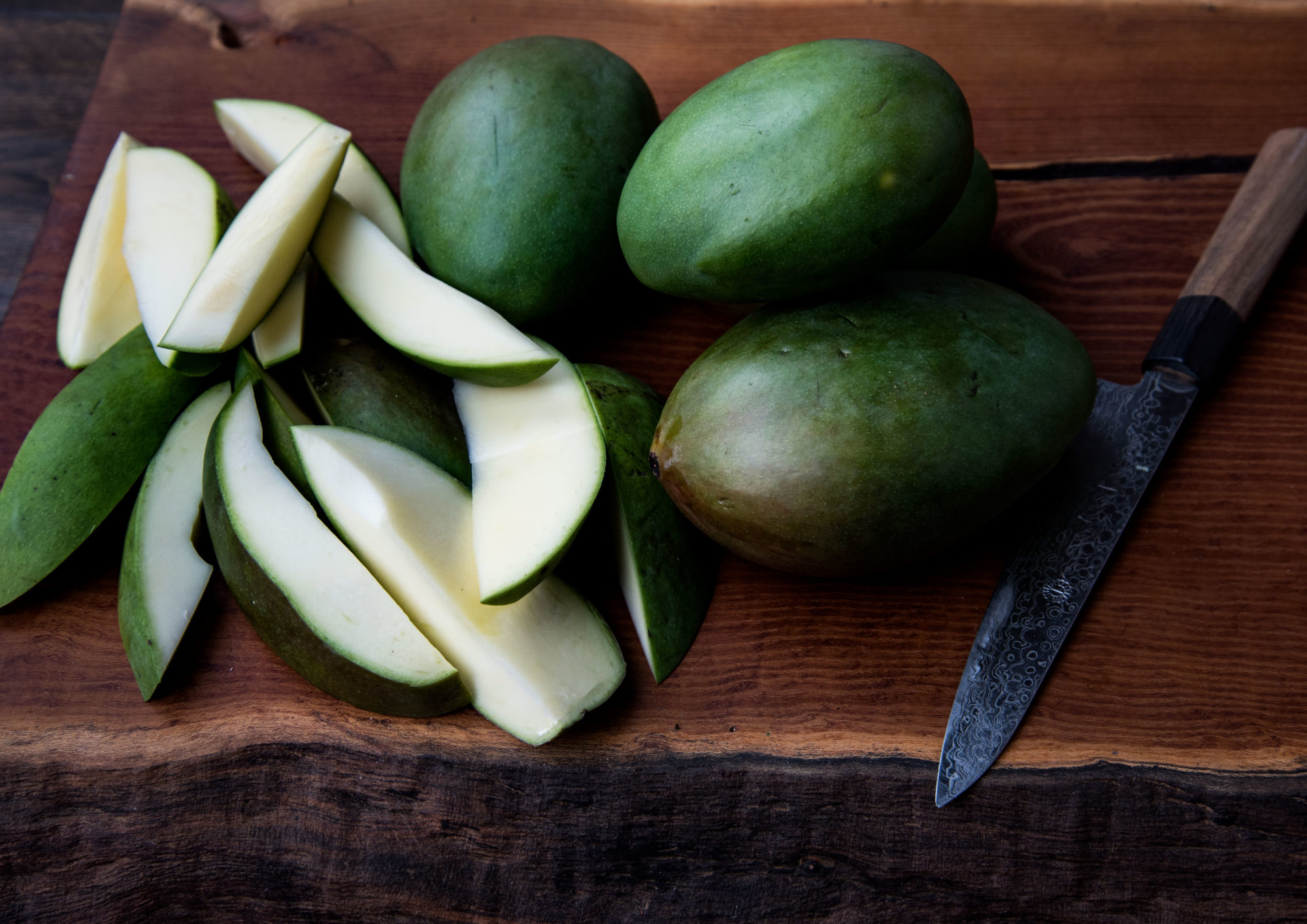 With a dry-braised Durban curry, you can make the most of tart, fibrous green mangoes.

Growing up in Durban, on South Africa’s humid east coast, where the salty spray of the Indian Ocean meets coconut palms and wild banana trees, the appearance of green mangoes signaled the brief interlude between spring and summer. As the strength of the sun intensified, these fibrous, unripe (sometimes called “raw”) mangoes would sweeten rapidly, the skins turning a mottled sunshine yellow and autumnal red—perfect for eating straight from the tree, sucking on the saccharine strings. But once they ripened, the magic of their once tart, firm flesh was lost.

South African green mangoes, often used for pickling when not eaten in the wild, are descendants of the Indian mango, which arrived in Zanzibar on Africa’s east coast in the 10th century with Arab traders, and later, as dried seeds with the Portuguese, who jostled to control the spice trade route in the 16th century. Unlike India’s starry Alphonso or Pakistan’s beloved Anwar Rataul, these no-name common mangoes are related to the earliest local cultivars called the Peach and Sabre, according to Christo Human of the Agricultural Research Council.

The region around Durban is where indentured Indians, mainly from South India’s Tamil Nadu state, were brought to work on British-run sugarcane plantations and railways from 1860 until 1911. Over the century and a half that followed, dishes that had been popular in India developed their own traits across the ocean as they mingled with South African indigenous produce and cultures, and the mango played a role of its own. This gave rise to what’s known today as the Durban curry, a loose term for the South African Indian cuisine born in this part of the world. A descendant of the Indian indentured laborers from 1860, I spent my early childhood darting around trays of green mangoes in my grandmother’s backyard that had been left to dry under muslin before they made it into large jars of heavily spiced sunflower oil for atchar, or “pickle” as we call it, or landed in a shallow saucepan for a dry braised curry.

In my home province, many have dubbed this green mango dish “sugar mango”—a  name my father fondly recalled as we ate a plate of piping-hot mango curry recently, since the tartness of the green flesh is sometimes tempered with up to a cup of sugar, thus the name. Unlike the saucy mango curries of Sri Lanka and Southern India that use the ripe fruit, which are often enriched with coconut milk, this one is a drier, less soupy curry—focused on the mango and the spice.

The green mangoes are washed and cleaved through the still-tender seed, with the leathery skin either peeled or (as in the case of my family) left on to tenderize in the pot. After thinly sliced onions are sautéed in a pot with oil or ghee, you drop in cumin seeds, dried red chile, fresh curry leaves on the stem, and mustard seeds, which respond with an orchestral pop and splutter. Then, in slide the mangoes to simmer with a little water, turmeric, sugar, and salt.

Cookbook author and novelist Nandita Godbole, who spent her childhood playing in her family’s mango orchards in Maharashtra, India, lists panna (a refreshing drink), relishes, chutneys, preserves, and fish stews as popular uses for unripe mangoes. London chef Asma Khan of Darjeeling Express has fond memories of kacha aam dhal, a Bengali favorite from her youth made of lentils and sliced green mangoes. But it’s hard to pinpoint a dish outside Durban that uses green mangoes as the star ingredient and is served as a main, rather than just a complementary side or a condiment.

In my kitchen in Cape Town a few months ago, with my visiting mother at my side and a stash of green mangoes from Durban, I made my own curry, retaining the skin like my grandmother did but nipping off bruises and black spots. Even if you don’t have a supply of Durban mangoes, you can look out for unripe mangoes of any variety at your local Indian or South East Asian grocer. They’re usually no larger than duck eggs, with skins as dark as an avocado’s and a sprinkle of black dots. When cut, the flesh will be pale, almost white.

Half a cup of water and half a cup of brown sugar make a good “dry” braise that gets sticky but not soppy and in less than 20 minutes the mangoes relax and soften but hold their shape. If green mangoes are tough to source, just use the most unripe ones you can find and bring out the tartness by adding a tablespoon of amchur (dried green mango powder) and using only a third of the sugar. Serve with fluffy rice and mango atchar.