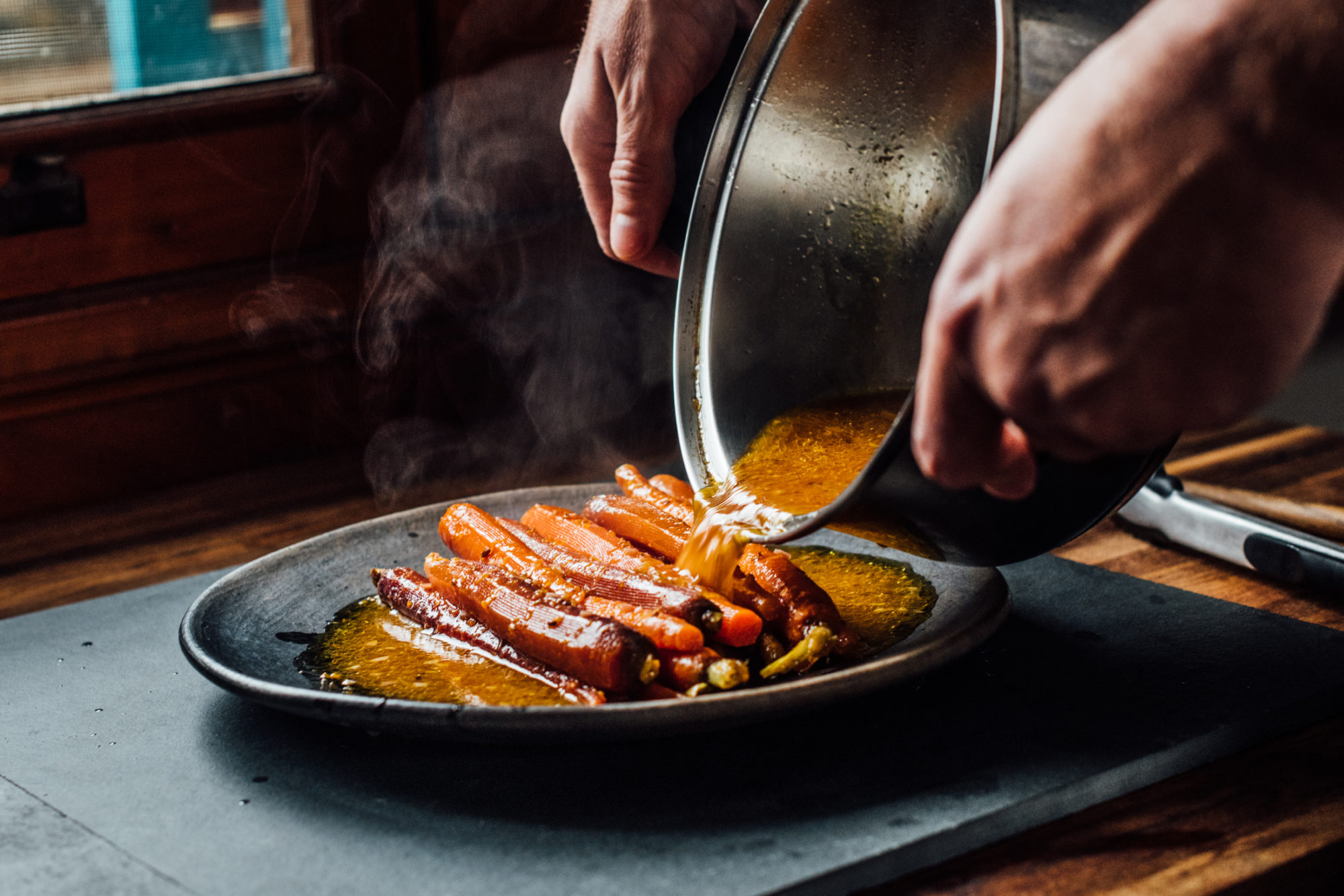 Jean-Georges Vongerichten makes ingredients taste like themselves in unimaginable ways. And the home cook can do it, too.

Long before there was toast, there was juice. So it went in the world of four-star chef Jean-Georges Vongerichten.

For the past 10 years, the Alsace-born Vongerichten became a kind of demigod of the crusty loaf with the array of crab-and-lemon toasts and squash-and-ricotta toasts and tomato-and-aioli toasts he and right-hand man Dan Kluger were serving at airy ABC Kitchen in Manhattan. Those olive oil–fried slabs were the flint and steel that sparked toast mania across many an American metropolis. If you do not live in, say, San Francisco or Los Angeles or New York and are thinking, “Toast? A trend?” your incredulity is warranted. Yes, toast. With things on it. It became a dining obsession. I scratch my head still, and I lived in New York City when the flare turned into a conflagration. Toast! Everywhere you looked! Decades before, in the 1980s and early ’90s, as he toiled toward his current iconic global standing with nearly 40 restaurants across the world, Vongerichten became famous for a technique that also ignited a trend in the States: converting juices to sauces. Light sauces fortified and emulsified with butter and modeled after the delicate sauces of the pioneers of French nouvelle cuisine in the 1960s. His was a cooking style simple enough that Vongerichten trumpeted the adjective in the title of his first book, 1990’s Simple Cuisine. Lobster with asparagus juice. Veal chops with pineapple juice and pine nuts. Black bass with beet juice and caviar.

I was beginning to pay attention to fine-dining restaurants and chefs during the mid-1990s, and by the time Vongerichten opened his Manhattan flagship, Jean-Georges, in 1997, you could not escape the man. Or his juice. He seemed to be in every mainstream food publication, all the time. Regular appearances in The New York Times; a monthly recipe column in Food & Wine, year after year. I bought his 1998 namesake book, Jean-Georges: Cooking at Home With a Four-Star Chef, and started cooking from it. I wanted to know and understand, on the stove and on a plate in my tiny Boston and San Francisco apartments, why Vongerichten mattered. There were successes as I cooked through the book: a verdant parsley soup in which every part of every vegetable was employed; a plucky salad of roasted beets dressed with sherry vinegar and minced ginger; braised carrots, alive with fresh orange juice and moored by loamy cumin. There were failures, including a catastrophe of a fish fumet, all muddy and cloying. I remain unsure if the fault was mine or the recipe’s. Probably mine.

At its best, as with those carrots, I learned that Vongerichten’s techniques catalyze the main ingredient into tasting like itself in ways I had never encountered. Years later, I would experience it again firsthand when I dined at Jean-Georges and tasted his signature seared scallops with caper-and-raisin emulsion. This was not the austerity of leaving good ingredients alone, that now-tired dogma of a certain breed of farm-obsessed restaurant. (Looking at you, San Francisco Bay Area and Brooklyn.) No, Vongerichten used ingredients and methods from varied cuisines to rare effect. Had I tasted carrots and cumin together? Absolutely. Carrots and orange juice? Some. The three all together in this way? Not until Vongerichten. You start by peeling fresh, smallish carrots. The kind you might find with the tops attached. You then bring whole cumin seeds, orange zest, garlic, olive oil, and orange juice to a simmer and in go the carrots. The liquid bubbles for an hour or so, reducing and going sticky as the carrots discharge their woodiness. You then shock the roots’ groundedness with a touch of lime juice and emphasize the funk with some chopped cilantro.

The resultant dish is an exercise in transmutation. The carrots become giving and so very carroty: earthy, soft, sweet. Blame the orange juice. A pulpy life coach, it helps the carrots self-actualize, becoming more their true selves than when they were raw.

Try doing that with toast.