Get a free recipe
Subscribe
Why Do We Care What Celebrities Cook?
By: Korsha Wilson Illustrations: Natalie Nelson 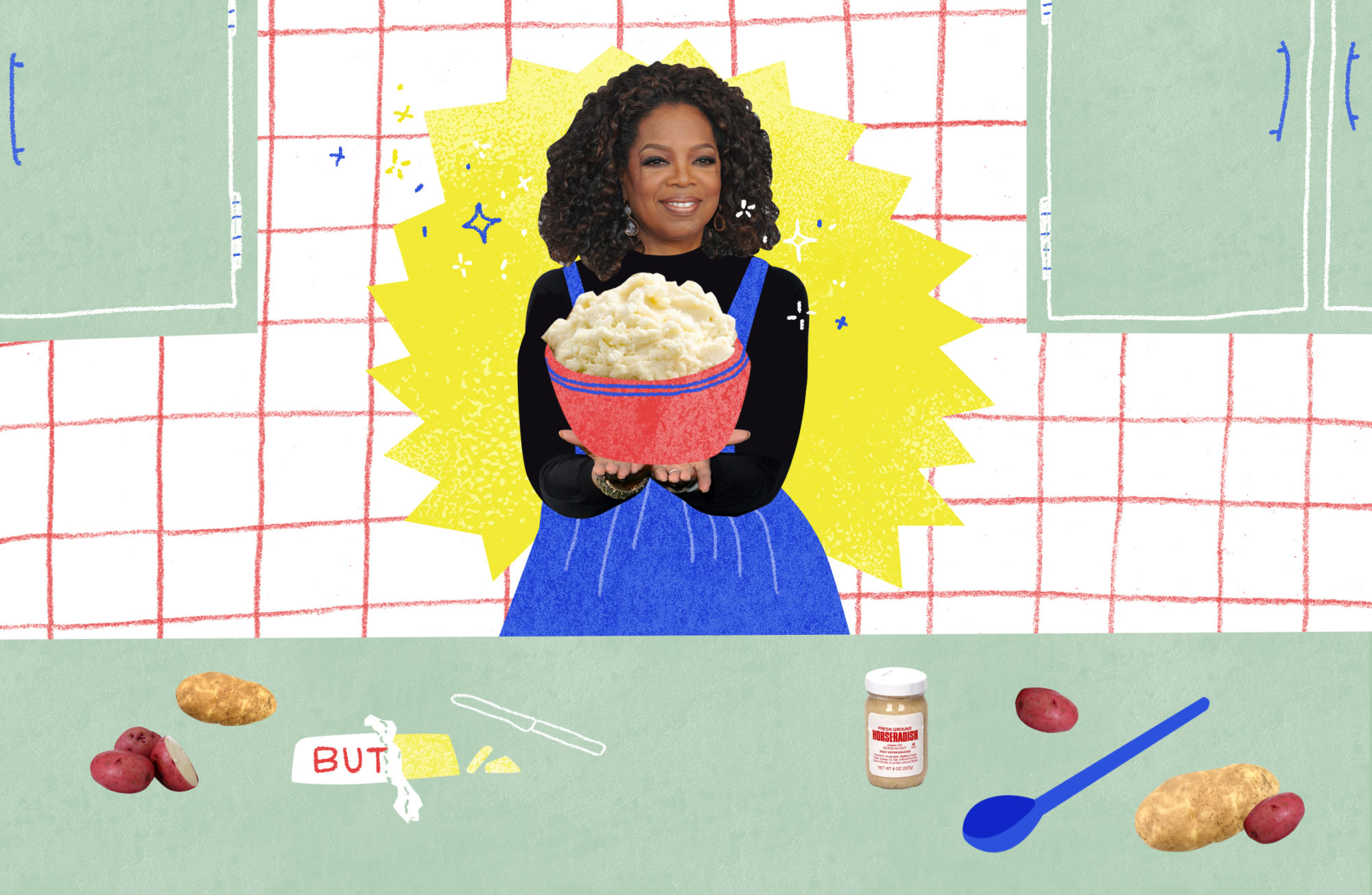 When you decide to cook Oprah’s mashed potatoes, it’s never really about the potatoes.

Recently at my local grocery store, my eyes darted between a recipe on my cell phone in my left hand and a shopping basket in my right hand. I was making sure I had all of the ingredients I needed. Following a recipe to the T was new for me since I’ve always embraced an improvisational approach to cooking. But the recipe in question was for Oprah’s famous horseradish mashed potatoes from her once beloved and now closed restaurant, the Eccentric—which opened to much fanfare in 1989 in Chicago. I had to get it right. I looked at the simple ingredients list on my phone (russet and red potatoes, creamy prepared horseradish, cream, butter) one more time to make sure I had everything. I inched closer to the register behind a line of people (making less-frivolous purchases than me) and wondered why I left my apartment, walked five blocks to the grocery store, and meticulously scoured the aisles for the ingredients that were now in my basket. Why was it again that I so desperately needed to try Oprah’s mashed potatoes?

Celebrity cookbooks—books focusing on the foods made by celebrities, not the recipes of celebrity chefs—tend to feel a little like forced dinner-party manuals, with pictures of our host or hostess awkwardly cutting onions or carrots in a kitchen that looks like it should be part of a Restoration Hardware or Ikea showroom. These stars live in a charmed world of perfect weather, with natural light pouring steadily into the kitchen at all times. Fresh avocados, oranges, or apples are permanently arranged in an impossibly expensive bowl nearby, just waiting to be plucked and added to whatever dish happens to be on the menu for the day.

The message is: “You’ll never quite have the life that I do, but if you follow this recipe, you can at least drink the same smoothie for breakfast.” Some celebrity cookbooks might give a cursory nod to the author’s private chef—which provides a dash of credibility, perhaps—but to me, it feels a little like cheating. I want to read cookbooks by people who have put the time in, made mistakes, produced dishes that are hilariously bad, and have good recipes to show for it. But often when a movie star or a famous musician writes a cookbook, the recipes become an ingestible marketing tool meant to bring you closer to what this person is actually like minus the imperfections and improvisation that make the act of cooking so beautiful. But Oprah is the rare celebrity who doesn’t keep her readers at arm’s length with salads made from unrealistically delicate ribbons of unattainably ripe melon. Billionaire or not, what she’s asking of us is relatively simple: Boil some peeled, cubed potatoes in lightly salted water for 30 or so minutes, drain them, and mash in a large bowl with butter, cream, salt, pepper, and a couple tablespoons of horseradish. It’s honestly pretty boring as far as recipes go. But that’s part of what makes it so appealing. You can imagine a bowl of mashed potatoes on Oprah’s dining room table, her and Stedman serving themselves from the bowl and discussing what billion-dollar investments they made that day. It’s approachable for home cooks, and more importantly, it’s believable.

Oprah was part owner (so naturally the spokesperson) of the Eccentric, known to locals and tourists as “Oprah’s place,” which received good reviews for its new-American comfort food. “She’s just one reason that this place may rank as the most sheerly joyful restaurant to open in Chicago in a long time,” gushed the Chicago Tribune a mere two months after the restaurant opened. The star of the menu, and the dish mentioned in every review that I’ve found, is “Oprah’s Potatoes,” a side dish of chunky, mashed red and russet potatoes with plenty of butter, cream, and a bit of prepared horseradish.

Like many celebrities, when we talk about Oprah, what we’re really talking about is how we feel about her without any personal evidence of what she’s actually like.

At first I assumed that a chef behind the scenes was responsible for creating the recipe, but Oprah “was observed, shortly before the restaurant opened, peeling and mashing her own potatoes, trying to get that recipe just right,” the Los Angeles Times wrote in a review. Some reporters even caught her acting as the de facto maître d, seating guests and greeting tables on busy nights before it closed in 1995. I’m not sure how she had time for this, considering she was hosting The Oprah Winfrey Show, an hour-long syndicated talk show that was incredibly popular and filmed in her own studios near the West Loop in Chicago.

Like many celebrities, when we talk about Oprah, what we’re really talking about is how we feel about her without any personal evidence of what she’s actually like. There’s a small circle of people who know her, and the rest of us are just reacting to an image created by shows, her magazine, books, recipes, and the (many) gifs of her that we encounter. Mashed potatoes are universally loved yet inconspicuous, and that feels true to the brand.

In her 2017 cookbook Food, Health, Happiness, she writes about discovering that she could add whipped cauliflower to potatoes to create “healthy” mashed potatoes. “It makes you feel like you’ve actually beaten the system!” she says with her trademark exuberance. She also shares that her dinner guests can’t tell she’s added cauliflower to the dish, and it humanizes her in a way that the many arms of her media brand cannot.

Mashed potatoes are really ugly, I thought as I mashed all of the ingredients together in a glass bowl on my kitchen counter. And that’s part of why we love celebrity recipes. “There’s something incongruous about the dizzying heights of celebrity and the messy, ugly reality of cooking and eating, and all the humanity that entails,” food writer Ruby Tandoh wrote of celebrity cookbooks in the Guardian a few years ago. It’s the same reason we like paparazzi photos and behind-the-scenes clips: We want to see real life without the veneer of posturing, and nothing does that quite like food and cooking. We don’t want perfect place settings and tableware or potatoes prepared and plated for a photo shoot. We want the starchy, monochromatic mess, dripping with butter, that we had to pound using the force of our own muscles to create the right consistency.

Once the potatoes were thoroughly mashed and all of the ingredients were incorporated, I gave them a taste. They were creamy thanks to the addition of red potatoes and pleasantly salty with a bit of tang from the horseradish, but ultimately they were unremarkable. I wondered if that’s the downside to celebrity recipes. Can a dish ever live up to the larger-than-life image of a person like Oprah?

I shot a text to a friend who knew about my experiment. “The mashed potatoes are okay,” I said.

They texted back. “Be careful, you’re talking about Oprah.”

Korsha Wilson is a food writer, culinary school grad and host of A Hungry Society, a podcast and blog dedicated to creating a more inclusive food world. If you want to see her geek out ask her about the role of restaurants in modern society or "real" crab cakes. She grew up in Maryland.