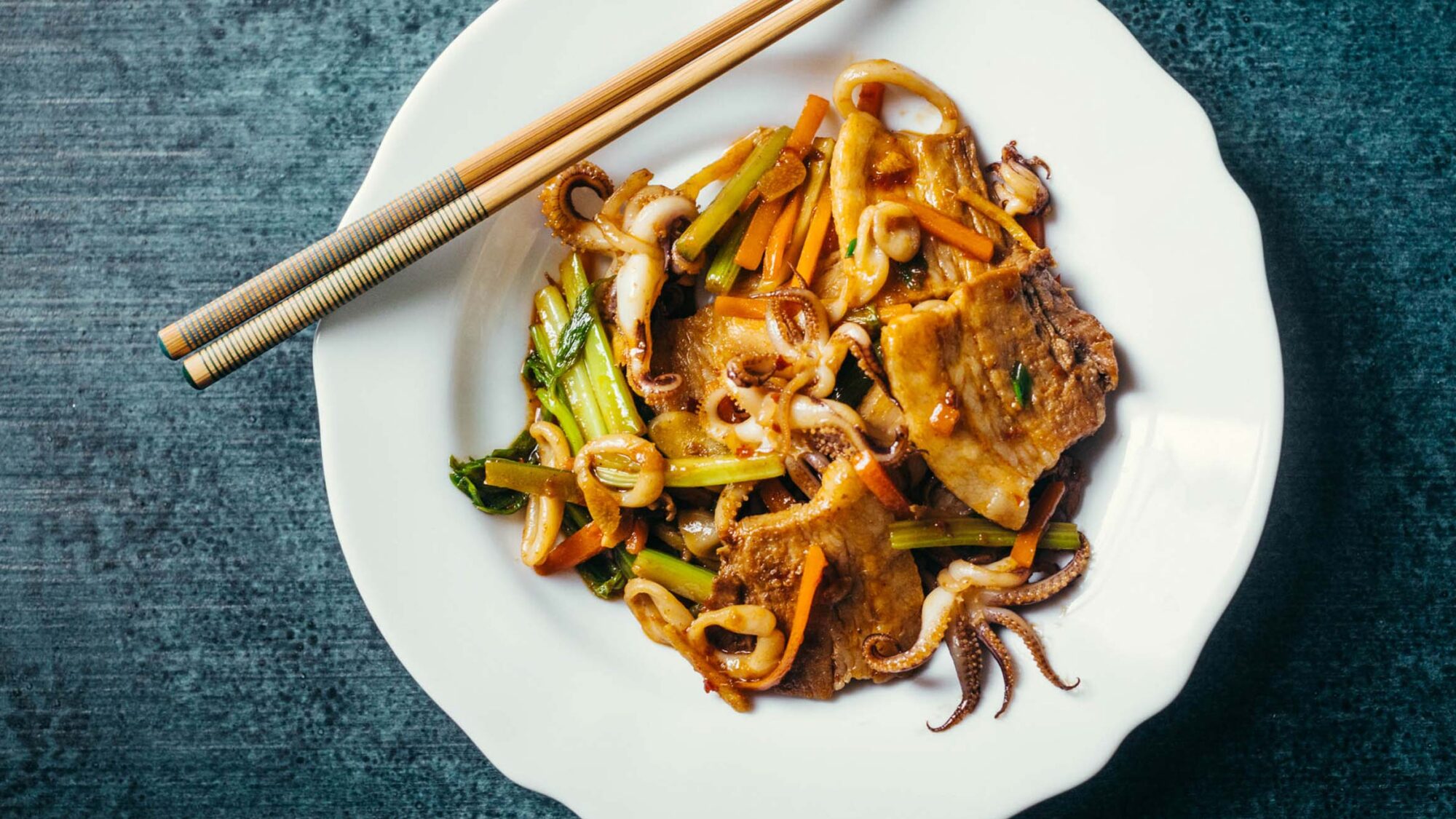 Even if you didn’t watch the 2020 Democratic National Convention last August, it was impossible to miss: the “calamari comeback” moment. During the televised event’s “roll call” of delegates from each state, viewers were presented with a Miss America–like montage, only instead of beauty queens, lawmakers were joined by or replaced with farmers, factory workers, students, activists—or, in the case of Rhode Island, a cook, clad in a black bistro shirt, a chef’s beanie, and a mask, silently brandishing a platter of battered and fried calamari adorned with pickled cherry peppers and grilled lemon wedges.

It was perhaps the most attention this country has ever paid to squid.

Six months later, it’s clear that calamari—as the cephalopods are known in Italian—has not had the comeback that Rhode Island’s Democratic Representative Joseph M. McNamara used the 30-second cameo to lobby for. The $28 million industry is the Ocean State’s most valuable fishery. But since COVID-19 disrupted restaurant sales—as well as global distribution networks that domestic fishermen rely on to process, export, and import squid around the world—they’ve seen squid prices nearly slashed in half. Fried calamari is a mainstay at chain restaurants like TGI Fridays as well as at family-run red sauce joints, seafood shacks, bars, diners, ballparks, and roller-rink concession stands throughout the United States. Hence, the fate of Rhode Island’s squid industry is helplessly entangled with the country’s struggling restaurant industry.

Since enjoying a communal basket of deep-fried bar food with a pack of friends still seems a long way off for many Americans, now is the time for more home cooks to embrace the cephalopod. As Americans are leaning into home cooking, given the pandemic year—and as seafood distributors forge more direct routes to customers—squid is overdue for a more inclusive embrace. Beyond deep-frying, this frutti di mare makes a great addition to classic stews from cioppino and bouillabaisse to soondubu jigae and gumbo; lightly grilled, pan-seared or stir-fried, it lends itself to countless dishes and cuisines.

Fishermen and industry members point to the ingredient’s association with the deep-fried finger food as partly to blame for its absence in many home kitchens. For a lot of Americans, the idea of calamari is synonymous with its battered-and-fried preparation.

“Everyone knows fried calamari, and that’s it,” says Stephanie Villani, co-owner of Blue Moon Fish, who has been selling seafood caught in Long Island directly to customers for the last 30 years.

“It wasn’t something people thought about making in their kitchen, when the impression was that it’s deep-fried only,” says Justin Hamilton, vice president of sales at The Town Dock, a calamari distributor based in Point Judith, Rhode Island.

Yet he acknowledges that the crispy appetizer has been the fire that’s fueled the domestic squid industry. Their company was founded in 1980, as New England fishermen struggled to find alternatives for diminishing stocks of cod, flounder, haddock, and other commonly caught fish. In 1977, the National Marine Fisheries Service implemented protections that reduced the amount of fish fleets could lawfully catch, and the quotas continued for years. According to The Town Dock’s president and CEO, Ryan Clark, the business really took off in the mid-’90s, when calamari fritti made the jump from antipasti menus at mom-and-pop Italian American restaurants to mainstream chains and restaurants of all kinds: “It was a popular food with customers, and fairly profitable for restaurants,” he says. Of course, Italian American restaurants weren’t the only places you could order squid; it’s prepared in various ways as part of cuisines throughout the Mediterranean, Asia, and Latin and South America. Cantonese-style salt and pepper squid, with flecks of fresh jalapeno, is a fried calamari cousin found in Chinese restaurants. With both fried dishes, cutting squid into crisp, bite-size rings and sparse tentacles to serve as an appetizer—rather than a main course—renders it a familiar finger food to those unfamiliar with or even fearful of the purple-speckled, tentacled creature. (Perhaps as testament to the irresistibility and interchangeability of fried foods, it has been speculated that some distributors swap in pork bung for calamari.)

“It’s a weird-looking animal,” admits James Mark, the Providence, Rhode Island–based chef of acclaimed restaurants North and Big King. For North’s unconventional take on dan dan noodles, Mark folds chopped squid into the sauce of ground mutton and bean paste to showcase the regional ingredient and add complexity. Before the pandemic, squid would make an appearance on specials at either restaurant if he could get it super-fresh from local fishers. “If you get it 24 hours out of the water, it’s a very different texture than at 42 hours,” he says, likening the former’s texture to that of delicate cartilage. Mark believes that fried calamari is such a popular go-to for restaurants in part because its quality doesn’t suffer if you use frozen and thawed squid.

But fresh squid is increasingly hard to come by. Perhaps shockingly, most of the squid caught in Rhode Island as well as on the West Coast, where some 42,000 tons are pulled from the Pacific each year, is immediately frozen and shipped to China for processing, where labor costs less, before some of it is refrozen and shipped back.

“You get these nice little packages of frozen squid, where it’s all cleaned and packaged very nicely,” says Villani, of Blue Moon Fish. Locally caught and processed squid is the anomaly now, while frozen packaged squid is the de-facto product—even if you live near those shores.

Conversely, in Asian fish markets in the United States, you’re likely to find fresh squid in a couple different sizes, cleaned or with their purplish skins, cartilage, and heads intact. You’ll also find it dried and processed in various ways. Before refrigeration allowed for quick freezing, squid and other highly perishable seafood was often dried to preserve it. Then, it could become an umami-rich building block for soups or sauces, or it could be reconstituted with water to use like fresh squid. Dried squid or cuttlefish that’s been shredded into threads is a chewy, jerky-like snack that you can find in most Asian markets. The dried threads can also be added to stir-fries or seasoned, such as in the Korean banchan ojingeo-chae-bokkeum.

As a fresh ingredient, the cylindrical bodies of larger squid are often scored before adding them to stir-fries or soups, which textures them like gnocchi. Scraps of squid and other seafood can be pulverized and combined with starches to make fish balls or fish cakes, frozen and ready to pop into noodle soups. Used in everyday home cooking in various ways, squid hasn’t been forgotten in Asian American kitchens. And it has deeper roots in American cooking than may seem from our current crispy-calamari craze.

Since squid was one of the least expensive seafood products sold at her stand, Villani has answered questions from many customers interested in cooking with it for the first time. Her go-to answer was to grill it, whole—a foolproof way to add char and avoid overcooking it, with rubbery results. But another dish she has recommended widely is cold squid salad, which she has served at many backyard barbecues (her cookbook, The Fisherman’s Wife, contains two squid salad recipes). It’s the kind of dish she used to see in deli counters and prepared food sections of seafood shops. “Everyone loves it,” says Villani. “Even my friend who doesn’t like squid, he eats it.”