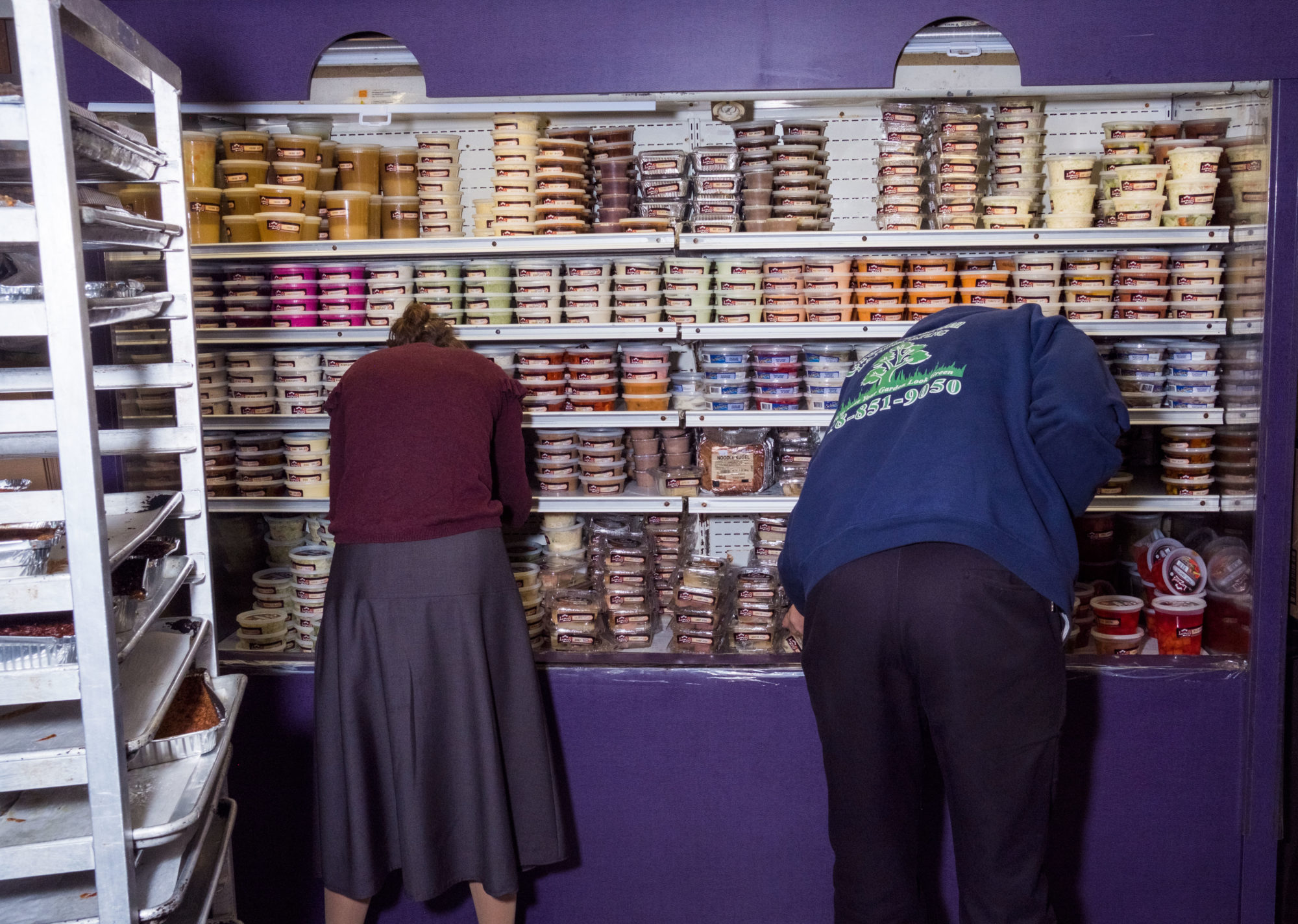 By noon on Friday, the rush at Hungarian Kosher Cuisine is in full swing. The narrow, fluorescent-lit shop in Borough Park, Brooklyn, is not crowded for much of the week. But with only a few hours to go before sunset, a crowd of housewives and bearded men in black baggy suits files in to buy home-style takeout food for the festive Jewish Sabbath, or Shabbos, meals.

Behind a glass showcase, trays of sweet and savory kugels sit alongside rows of cabbage rolls stuffed with beef and braised in a bright red sauce. These are Ashkenazi classics, but there are also deep cuts from the Jewish-food canon, like kishke, beef intestine stuffed with flour, fat, and an unnaturally orange spice blend. Lecso, a Hungarian take on ratatouille, layers peppers, tomatoes, and eggplant stewed in sugar and paprika until soft.

Shops like these are the antithesis of today’s hybridized and fast-moving food culture. Many of the dishes are virtually unchanged from their 19th-century origins in Eastern Europe, making them unsuited to fad diets or photo streams. With delivery apps bringing food to your door at the flick of a finger, actual takeout itself seems increasingly obsolete. Yet kosher takeout thrives in urban centers like New York and Los Angeles and in suburban Jewish communities across the country, thanks in part to the fuzzy concept of heimishe. It can mean different things depending on the context: informal, traditional, homey, or cozy. “It’s cheap food that tastes good,” says Shimon Klein of Borough Park’s Satmar Meat Market & Take Out, adding that it usually involves a sauce to be mopped up with a piece of golden challah bread.

A heimishe store is typically Spartan and unpretentious. Luzee Glick, who runs the nearby Luzee’s Take Home, says that “it boils down to tradition—not just tradition, but homemade tradition.”

Glick says that in the old country, places like Poland and Lithuania, there was no concept of buying prepared home-style food outside the home. “Now you can get your heimishe thing, whatever your mom or bubbe made back in the day,” he says. The bulk of Glick’s business comes from food bought for Shabbos—the period from sundown on Friday night to sundown on Saturday—and Jewish holidays, and he spends the whole week preparing for it. Jewish law forbids cooking on Shabbos, meaning that anything eaten must be prepared ahead of time. Cooking two days’ worth of elaborate meals in advance, from scratch, is no easy task. Kosher takeout fills a practical need, especially for the large families common among observant Jews.

One standby is kugel, a pudding of starch, oil, and eggs that is omnipresent at Jewish gatherings. Luzee’s sells at least eight kinds, ranging from the traditional potato and noodle to a tricolor Franken-kugel of broccoli, cauliflower, and sweet potato. Among the best are overnight kugels, baked low and slow until the starches caramelize, the crust burns, and the interior melts.

Filling and adaptable to any budget, kugel has played an enormous role in Jewish culinary history since the Middle Ages. “Shabbos without kugel is like a bird with no wings,” goes one Yiddish expression, typical in its spiritual association between Jewish holidays and communal food. Eating good food on Shabbos is not just encouraged by Jewish law but required. Maimonides, the 13th-century scholar, wrote that this comes straight from the prophet Isaiah, who exhorted Jews to delight in the Sabbath. Other laws mandate eating three meals, and that one must save up an appetite to do so. To amplify the festive nature, eating fish is also obligatory—often gefilte fish, a poached mixture of carp and pike served cold—but only if you enjoy it, “because Shabbos was given for enjoyment and not for discomfort.”

Unlike many cuisines around the world, the best Jewish food is based on home cooking rather than fine gastronomy, says Jayne Cohen, the author of Jewish Holiday Cooking. “There was never was any ‘royal’ or ‘court’ Jewish cuisine, like the grand cuisines to be found at the courts of princes and kings,” she says.

In the absence of Jewish royalty—at least since Biblical times—ordinary Jews developed their own foods in the home kitchen, which eventually grew into a restaurant culture of their own. But because of Jewish dietary restrictions, that took time. For years, finding kosher food outside the home was often difficult, unless one knew and trusted the cook. Commercial kosher certification was only popularized in the early 20th century, and even today, readymade kosher food is not always widely available. Kosher takeout offers the pleasures of home cooking, without the work but with the rabbinic approval.

“It’s my addiction,” says Herman Friedman, who has lunch nearly every day at Gottlieb’s Restaurant on Roebling Street in South Williamsburg, Brooklyn. “The food here hasn’t changed in 40 years,” he says. “Gottlieb’s just has that feel, that taste.”

Popular dishes at Gottlieb’s include an especially tender stuffed cabbage and an airy chopped liver available only on Thursdays and Fridays. The bright-orange kishke, a sausage casing stuffed with fat, starch, and spices, is best ordered grilled. Gottlieb’s is also the place to buy cholent, a filling and gelatinous stew of flanken-cut short ribs, potatoes, and kidney beans. Cholent dates to 12th-century France, where it was adapted from a Sephardic version brought over by the Crusaders. The Shabbos prohibition on cooking has given rise to dishes that could be prepared before Friday evening and left on the stove overnight, to be eaten warm on Saturday.

Nearly every Jewish community in the world has a version of cholent. The one at Gottlieb’s is meatier than elsewhere in the borough, although because the cholent there is self-service, the largest pieces don’t last long. In the Middle Ages, according to the late Jewish food historian Gil Marks, wives would bring their cholent to the local baker’s oven and socialize. The following day, the pots would be retrieved for lunch. Today’s takeout store embodies the same intertwining of food, faith, and conservation, which helps define Judaism. “It’s not just about coming in, getting your food, and running out,” says Glick, of Luzee’s Take Home. “The people who come in here like to say, ‘How are you? What’s going on? Have a good Shabbos.’”

Asked for the secret to a good cholent, Glick doesn’t blink: “A lot of oil, a lot of meat, and a lot of bones.” While that might sound unhealthy, he notes the traditional Hasidic wisdom that Shabbos food can’t harm you.

Yoni Wilkenfeld is a freelance journalist based in New York City, writing stories about food, religion, technology, the law, and whatever else he can find.