Get a free recipe
Subscribe
The British Bun Is Dying. And Other Half-Truths.
By: Ruby Tandoh Illustration : Alex Citrin 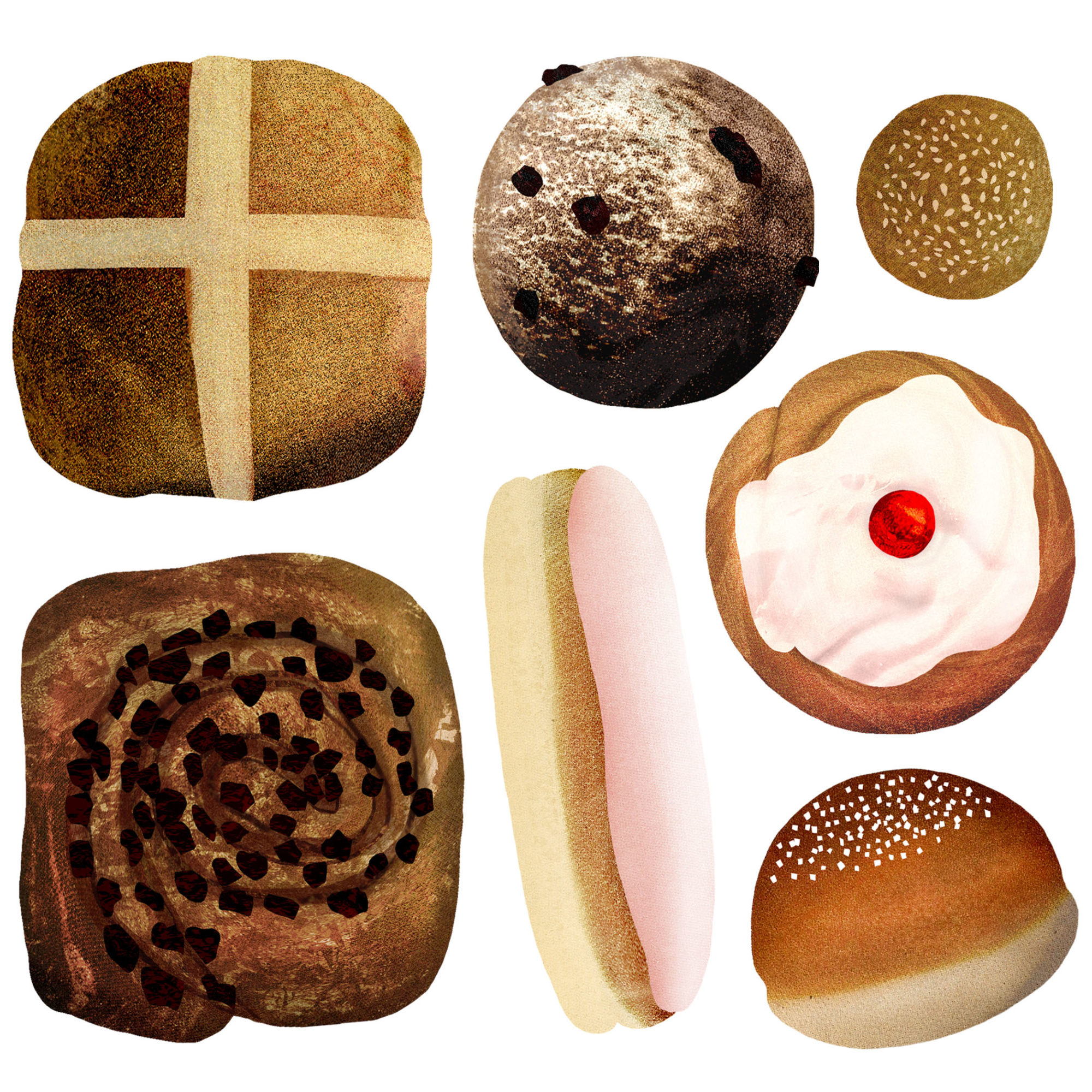 Buns are the forgotten essence of British baking. Or at least, that’s what I was planning to write here. To be clear, buns mean sweet yeasted breads: dough enriched with butter, eggs or milk, sweetened with sugar or honey, and shaped into swirls, plump hemispheres, fat fingers, or elaborate knots. You Americans have heard of scones and shortbread, I would suggest, but what about buns? It’s the bun that really sums up British baking. When you understand them (or so I thought), you will understand us. But the most seductive stories seldom tell the whole truth.

I’m not the first person to knead these questions of national identity into the medium of sweet dough. Food writer Elizabeth David wrote in her encyclopedic English Bread and Yeast Cookery that “Bath buns, hot cross buns, spice buns, penny buns, Chelsea buns, currant buns…are English institutions.” Introducing her own bun recipes, queen of British baking Mary Berry writes that buns are “classic British bakes at their simplest and finest.” And there are so, so many of them. There are Devonshire Chudleighs, Cornish splits, Sussex Plum Heavies, and Hawkshead wiggs—this one sweetened and flavored with caraway seeds. In each of these offerings, in their quirky names, there’s an implied “authentic” Britishness, rooted deep in the specificities of time and place.

Perhaps it’s the national fondness for the underdog that endears us to this slice of our heritage. It is impossible to hold a squat Bath bun—distended, lumpy, freckled with currants and candied peel—and not be delighted by its shabby, no-nonsense charm. I’ve been known to kiss the bottoms of hot cross buns as they emerge from the oven, fat and steaming. “The flesh of an infant soft, doughy and slight,” wrote one Victorian admirer of London’s famous Chelsea buns—cherubic swirls of tender dough filled with dried fruits and spice and brushed with sticky syrup.

And there’s a pleasing frugality about these kinds of treats. Before the development of chemical raising agents, such as baking powder and baking soda, yeasted doughs were the standard. In place of pound cake and red velvet, there were yeast-leavened fruit cakes and sweet buns. And whereas chemically leavened doughs insist on plenty of sugar, butter, and eggs for their tenderness, high levels of fat and sugar in yeast-leavened doughs are prohibitive to yeast activity, meaning that buns tend to be bready, only mildly sweet, and plainish in character. The excitement and expressiveness must be rolled into the dough or smeared on top: swirls of brown sugar and cinnamon, a speckling of plump raisins or a slick of water icing.

But the simple appeal of buns is waning. I’ve trudged London’s streets in search of London buns, Hackney buns, iced finger buns, and currant buns, and although I found a couple in London’s old-fashioned baker’s shops, such as Percy Ingle, Raab’s and Dunn’s, there’s little trace of the countless delicacies I have read about. Buns, those stolid, simple little things, which do not rise dizzyingly like angel cake or dazzle in shades of pastel buttercream, are a dying breed.

It is impossible to hold a squat Bath bun—distended, lumpy, freckled with currants and candied peel—and not be delighted by its shabby, no-nonsense charm.

In the face of their dwindling popularity, I was ready to champion the bun. I wanted non-Brits to try these buns and to love them as much as I do, and for Brits to remember the toothache of sickly sweet buns of their childhoods and to hunger once again for their doughy weight. I wanted not just to preserve some endangered corner of British food culture, but to insist on its supremacy. It would have been a tall order for such portly little confections, but I knew that as sure as the dough will rise, these bready mascots of British baking would hold their own. But this indulgent narrative of a forgotten British taste was a fantasy. I was wrong.

My country is leaving the European Union, mapping its edges in new and violent ways. At a time when even citizens—people who came here with the Windrush generation—are being deported, and when migrant communities are intimidated by immigration officials, the question of what “true” Britishness looks like has never been so loaded. One story that has risen amidst the chaos is that we can now return to a mythic “authentic” Britain of days gone by. It’s implied, strongly, that that is a monolingual Britain, a white Britain, a Britain of dependable, traditional foods, like boiled saveloy sausages in their bright red skins, and roast dinners, and indeed, good old-fashioned buns.

Of course, Brexit won’t stand or fall on the currant bun. But the language we use to preserve these culinary traditions is important, especially at a time of such frenzied meaning-making, when the entire national identity is being reforged. Because although there’s an easiness about the story of the demise of the British bun, it doesn’t tell the whole story. In new ways, in new forms, our bun tradition is thriving: in soft Polish poppy seed breads and custard-filled steamed bao, all of them abundant in the London I call home.

It’s not as easy as I would like to find a saffron bun or a currant-speckled teacake, but we can resurrect these treasures in home ovens rather than in grand statements, finding their meaning not in the rhetoric attached to them, but in the joy they give.

“A bun may be defined as a small, soft, plump, sweet, fermented cake,” wrote master baker John Kirkland in his 1927 manual, The Baker’s ABC. Nothing more, nothing less, just a sweet little bread. Sometimes that’s enough.