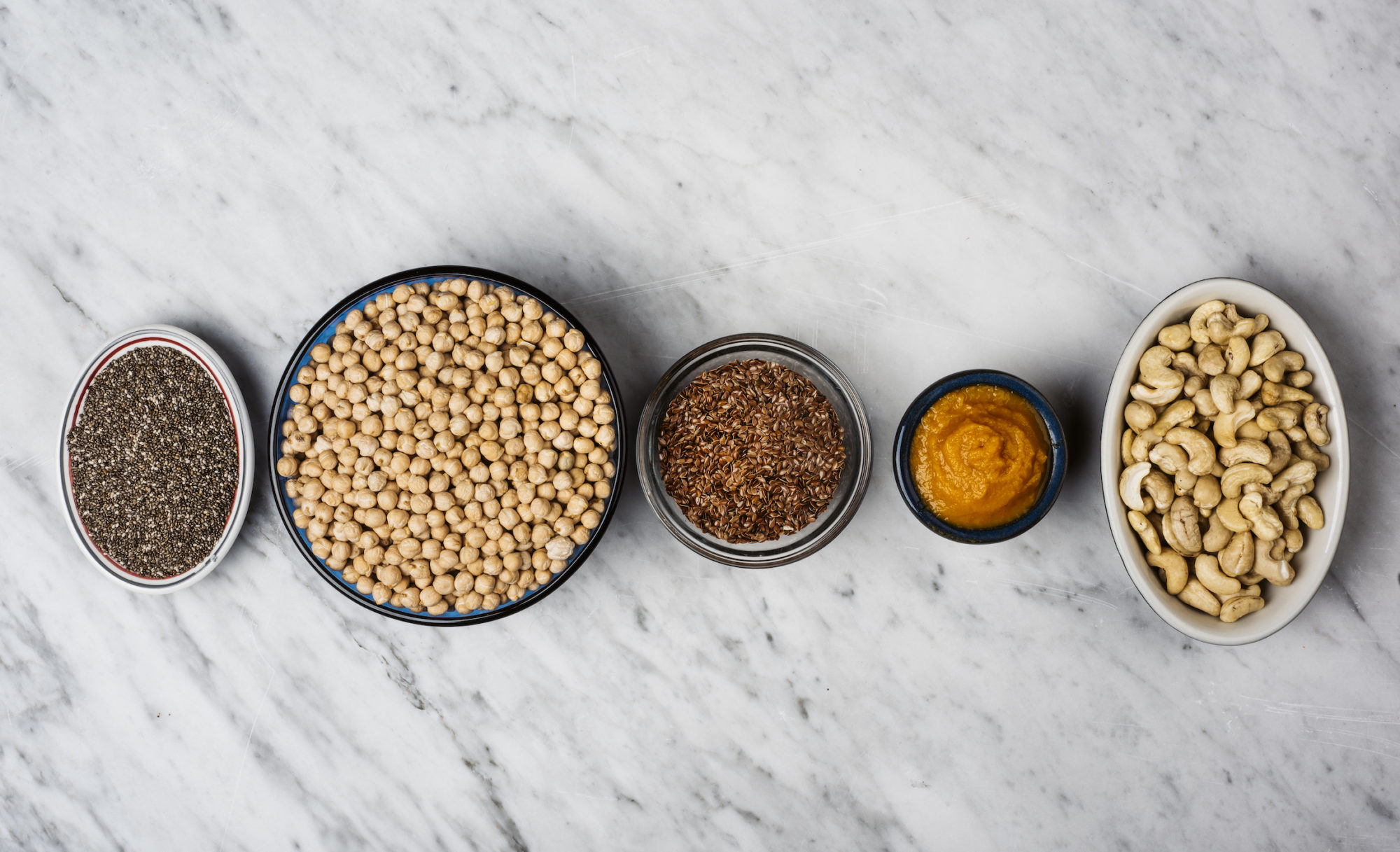 When it comes to imitating eggs, it’s hard to nail down the bounciness, richness, and slight sulfuric taste, and different scenarios call for different substitutes.

If you wanted to measure the evolution of vegan cuisine from its hippie roots through the dawn of Vegenaise and up to today, the best way is to trace how chefs and home cooks have replaced and emulated eggs in home cooking. Look at The Angelica Home Kitchen from the soy-heavy days of 2003, and the recipes for cheesecake call for firm tofu to pinch-hit. Move on to Vegan Pie in the Sky, published in 2011, and you’ll see a blend of soaked cashews and silken tofu called for in a similar recipe—right in line with the popular move from soy to almond milk. A serious home baker in 2015 could finally break those soy chains completely by harnessing the whipping power of aquafaba, the thick, beany brine found in a can of chickpeas that escaped vegan kitchens to find itself in the Food section of The New York Times and shaken up behind cocktail bars.

Eggs have been challenging to replicate because they serve so many functions: In baking, they’re either binding, leavening, providing moisture, or all three. If we’re talking savory cooking, the list of ways to prepare or use an egg is nearly endless—you could poach tofu, but what’s the point of taking the time if you won’t get a runny yolk upon stabbing it? When you give eggs up, you don’t just have to learn a whole new way to bake; you have to take a different approach to all sorts of mindless meal go-tos: omelets, breakfast sandwiches, a fried egg atop the scraps of last night’s dinner.

When you move beyond common grocery store items like bananas and tofu and into the realm of molecular gastronomy, the potential for egg-like textures is even more impressive. Professional vegan cooks have been tapping Versawhip 600K soy protein for meringues, Genutine X-9303 plant-based gelatin for bouncy desserts, and the hydrocolloid methyl cellulose to better stabilize that aquafaba everyone’s always talking about. “When I first became vegan almost 25 years ago, the idea of making anything that looked, much less tasted like an egg was ludicrous,” says Lagusta Yearwood, chef, chocolatier, and author of the forthcoming book Sweet X Salty: The Art of Vegan Confections by Lagusta’s Luscious. “But we make them every week for our ramen at our café.” At Yearwood’s Commissary in New Paltz, New York, soy milk, Genutine, and black salt make the egg white, while a spherified gel colored with turmeric and beta-carotene creates a poppable yolk. On first look, it seems like an egg sculpted out of rubber, but once you bite in, the textural resemblance to the real thing is uncanny.

While the vegan egg has never been more, well, egg-like, replacement in common recipes remains a delicate art, one that requires a deeper understanding of recipe science than you might want to apply to a simple chocolate chip cookie. There’s never a one-powder-fits-all solution; a well-stocked vegan pantry requires an array of strange-seeming items, from flaxseed meal to black salt. Here, a brief consideration of the most common replacements and when to use them.

Agar-agar: Whenever you want to make a passable crème brûlée, panna cotta, or flan, you reach for the agar-agar. There are powder, flake, and bar forms, but the powder is most commonly used. It mimics the properties of gelatin and is available at natural-food stores, but when not used judiciously, it can impart a grainy texture. Genutine X-9303 is a comparable replacement, but agar-agar remains much more accessible.

Applesauce: This was once the vegan baker’s go-to, with 1⁄4 cup of unsweetened applesauce serving as one egg. It binds, provides moisture, and is widely accessible, but it always imparts an undeniably fruity sweetness that takes away from whatever you’d like the starring flavor to be (unless that flavor is, of course, apple).

Aquafaba: In 2015, an engineer and amateur cook named Goose Wohlt realized that if you poured the liquid from a can of chickpeas into the bowl of your stand mixer and whipped for a while, you got a fluffy result similar to whipped egg whites. Since then, it’s been used to make macarons, pavlova, and less salmonella-prone pisco sours.

“There was absolutely no replacement for egg whites when I started baking, so you had to be at least very creative, but more likely a genius to create meringue or a convincing angel’s food cake,” says Isa Moskowitz, coauthor of Veganomicon: The Ultimate Vegan Cookbook. “It just so happens that chickpea juice can hold air when whipped. Funny enough, I had been taught to make hummus this way, always with chickpea juice to make it lighter and fluffier. I thought it was just one of life’s great mysteries.”

Mashed bananas: For banana pancakes, muffins, or cake, you’re in luck: You get both the necessary moisture and binding properties of eggs plus all the flavor you need when you mash up your black bananas for a recipe. One mashed banana is roughly equivalent to two eggs, but avoid any cakes that should have a light texture or call for more than two eggs. Cashews: The mild flavor of cashews makes them a fatty replacement both in some cream pie recipes or, as in Miyoko Schinner’s 2012 book The Homemade Vegan Pantry, a base for mayo. Turning them into mayo involves blending them with water, acid, and salt, then slowly streaming in oil as one would for a classic recipe.

Chia seeds: Considering the price of chia seeds, you might decide to opt for flaxseed meal, which works in a very similar way. You have to grind the chia seeds and mix them with water for blend that will give moisture and binding to batter-based recipes, like pancakes and muffins.

Chickpea flour: One of the most exciting realizations on the savory side of the quest for egg substitutes has been the chickpea flour omelet, which can be spiced and filled to your liking. The flour, when mixed with nondairy milk and spices, can be cooked like a pancake for a fluffy, savory breakfast that is close in flavor and texture to its eggy counterpart.

Burmese-style tofu made with the protein-rich flour has also become popular as a soy-free alternative, such as the version at Toad Style, a vegan fast-food restaurant in Brooklyn. “The Burmese tofu that we make here is the best tofu scramble I’ve ever had,” says co-owner Jill Camera, who’s been vegan for over a decade.

Flaxseed meal: You mix one tablespoon of flaxseed meal with three tablespoons of lukewarm water, let it sit for a bit, and voilà: a very gooey mixture some vegans refer to as “flax snot” that nonetheless will almost always come through for you with both moisture and binding.

Kala namak (black salt): This Indian ingredient changed the savory vegan breakfast plate forever when Moskowitz included it in Vegan Brunch: Homestyle Recipes Worth Waking Up For. Its sulfurous scent adds a distinct egginess to molecular eggs, tofu scrambles, and any other recipe that could use a hit of proper egg funk.

Pumpkin puree: Pumpkin and other squash purees work much like mashed banana but result in a less dense crumb. They’re also similar to mashed banana in that you don’t want to use them if you’re not seeking their particular flavor.

Starches: Boxes of Ener-G Egg Replacer, with their ’70s design, had long been one of the only options for vegan eggs in health-food-store baking aisles. We now have Bob’s Red Mill’s blend for competition, and both work rather flawlessly in recipes that only require egg as a binder, like cookies. Many cooks, though, have realized they can discerningly use tapioca, cornstarch, and arrowroot separately. Tapioca can become a bit gummy, while cornstarch is a reliable and cheap option. Arrowroot has always been my preference, as it has the most neutral flavor.

Firm tofu: The tofu scramble has long been a staple, crumbled into a hot pan, spiced, and sautéed with vegetables the way one would eggs from a cage-free chicken. There’s none of that chicken-egg fluff, though, which is why more futuristic substitutes, like the VeganEgg, have become popular.

Silken tofu: How do you make a classic vegan pumpkin pie? By throwing silken tofu, pumpkin puree, and spices into a blender, then pouring it into a crust and baking. It’s a simple, undeniable route to that smooth texture, one that chef Tim DeAsis at P.S. Kitchen in New York uses in a chocolate mousse, alongside more contemporary-style desserts that call for aquafaba and methyl cellulose.

The Vegg: Another one with a ’70s-era packaging that replaces just yolks with nutritional yeast for umami, black salt for egginess, beta carotene for color, and sodium alginate to make it all stick together. You can mix it with water and fry it for a scramble, or use it to make hollandaise or French toast, but it’s not a product you’re likely to see on supermarket shelves.

VeganEgg by Follow Your Heart: This algae-derived powder comes in an egg-carton container but sits in the baking aisle. It’s grown popular thanks to Follow Your Heart’s brand recognition (they make Vegenaise). When mixed with water, you can scramble it, make an omelet, bake a frittata—anything you’d do with whipped-up eggs. Thanks to smart flavoring, it takes all the seasoning work out of making similar dishes with tofu and has a more buoyant texture. For French toast or Dutch baby pancakes, it’s an unparalleled substitute.

Versawhip 600K: With the addition of xanthan gum, water, powdered sugar, and flavorings, this modified soy protein whips into a meringue and is also used for foams and other egg-white replacements. Omnivorous chefs gravitate toward it when making foams, like this Champagne one, as it’s incredibly stable.

This acts like a pancake but should be paired with vegetables or whatever you’d usually add to an egg-based omelet. The spices are also completely up to your tastes, with turmeric and kala namak necessary for the color and flavor of the traditional preparation.