Get a free recipe
Subscribe
A Brief History of Pennsylvania Scrapple
By: Jaya Saxena 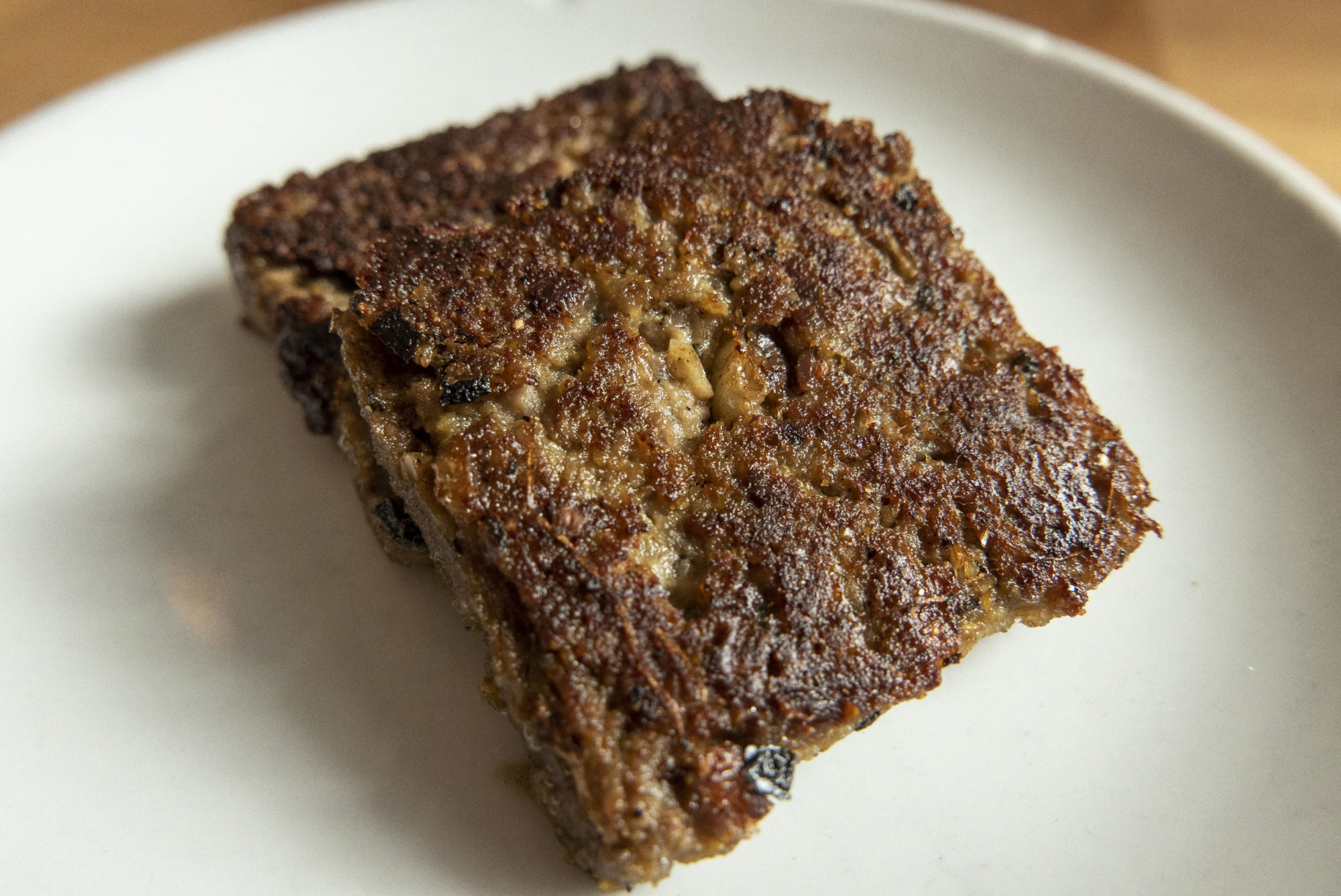 On the surface, the grainy, pudding-like meat is a tough sell. But call it a “pâté” and give it a sear in a hot pan, and you’re in business.

Scrapple has, thus far, avoided the fame and fetishization so many other regionally specific meats have experienced. But when I saw a friend excitedly Instagram a scrapple sandwich from a new Brooklyn bagel shop, I realized I should have seen it coming. When treated right, scrapple is, in my mind, far superior to your average breakfast sausage. Maybe that’s because it’s like breakfast sausage squared—sliced and seared in a skillet, it produces a soft but crunchy, salty, heavily pork-y and offal-y bite that was meant to be layered under eggs.

Obviously I’m not the only one in the world to know and love scrapple, the meat-and-grain-and-spice loaf brought to America’s mid-Atlantic states by German immigrants hundreds of years ago. Scrapple is a product of the middle colonies—Pennsylvania, Maryland, Delaware, New Jersey, lower New York—and the specifics of their colonial population. When I was a kid, my grandpa would fry it up with pancakes at his farm in New Jersey, or we would order it at breakfast down the Jersey shore. Instead of the Puritans of New England or the slave traders of the South, the middle colonies attracted non-English European settlers, including Germans, Swedes, and Dutch. Many were Quakers, who believed in religious tolerance, simplicity, and frugality. These core beliefs, it turns out, are a great recipe for scrapple. Uncooked scrapple, straight out of the packaging

The product finds its ancestry in panhaas, a German meat pudding consisting of pork odds and ends mixed with buckwheat and spices like sage and savory. When the recipe came to America, the buckwheat was often replaced or supported by cornmeal. “Unlike the Puritans, whose cooking habits consciously evoked the ways of the homeland, Quakers concerned themselves less with what they ate than with their attitudes while eating it,” writes James McWilliams in A Revolution in Eating: How the Quest for Food Shaped America. For the colonizers of the middle colonies, using local ingredients like corn was no problem, as long as the meal was simple and modest and everything was used.

Because more than anything, scrapple is what it sounds like—scraps. One recipe from 1853 writes that the cook should use “pork that will not do for sausage,” such as hearts, livers, kidneys, and random scraps of skin all boiled together, leading many from outside the region to look down at the dish. An article in The Montreal Gazette from 1909 insists that it’s something people from Pittsburgh must “pretend to enjoy” but concedes that it has its health benefits: “Scrapple-fed children in the country are healthier and make progress at school.” An egg sandwich at Shelsky’s features scrapple and maple syrup.

But if you’ve had offal or charcuterie made from it before, scrapple is probably not so exotic. As historian William Woys Weaver wrote in Country Scrapple, “change the name to polenta nera [black polenta, or polenta made with buckwheat], you can sell scrapple in any upscale restaurant.” Which may be exactly what’s happening. In addition to Shelsky’s, scrapple is on the menu at Williamsburg restaurants Egg and Fedoroff’s Roast Pork. It’s shown up at the Hog’s Apothecary in Oakland and Redbird in L.A. (though there it was described by one Yelp reviewer as “grilled polenta with tasty pork scraps on top”) and was even toasted in a waffle iron and topped with mayo and crispy bits of cabbage, okonomiyaki-style, at Ivan Ramen.

George Weld, the chef and owner of Egg, didn’t grow up eating scrapple but put pan-fried scrapple on the menu as a side dish after a cousin from Delaware said he had to have it, and Weld realized it was close enough to livermush (a coarse Southern meat loaf made of pig liver, head meat, and cornmeal) to match the Southern flavors he was going for with the menu. “Getting people to eat scrapple is a pretty funny experience at the restaurant,” he says. “It’s probably the most commonly discussed thing in front-of-house meetings: How do you describe scrapple so that people aren’t immediately turned off by it?” At first, listing the ingredients—cornmeal, pork kidney, hearts—made customers order sausage instead. But by describing it as analogous to a pan-fried country pâté, they started to win some people over. “Put it in the category of French charcuterie, and everyone’s OK with it.”

Scrapple is typically sold in raw pound loaves, ready to be sliced and fried, but outside of the mid-Atlantic you either have to order it from specialty stores or hope your local butcher decides to experiment. Weld used to buy his scrapple from the farmers market but started making it himself to ensure supply, as his supplier wouldn’t always keep it in stock. Even making it from Heritage Foods pork, as Weld does, it’s still a slurry of grains and off-cuts. But the stars may finally be aligning to give scrapple its due. “I think people have become a little bit more appreciative of regional distinctions, so scrapple definitely stands out as a unique regional food in that way,” says Weld. “Part of me is rooting for scrapple becoming really popular, and part of me has a secret wish that it remains a cult item. It’s nice talking to people who love it.”