Get a free recipe
Subscribe
Breaking In A Meatloaf in Every Oven
By: John Birdsall Illustrations: Alex Citrin 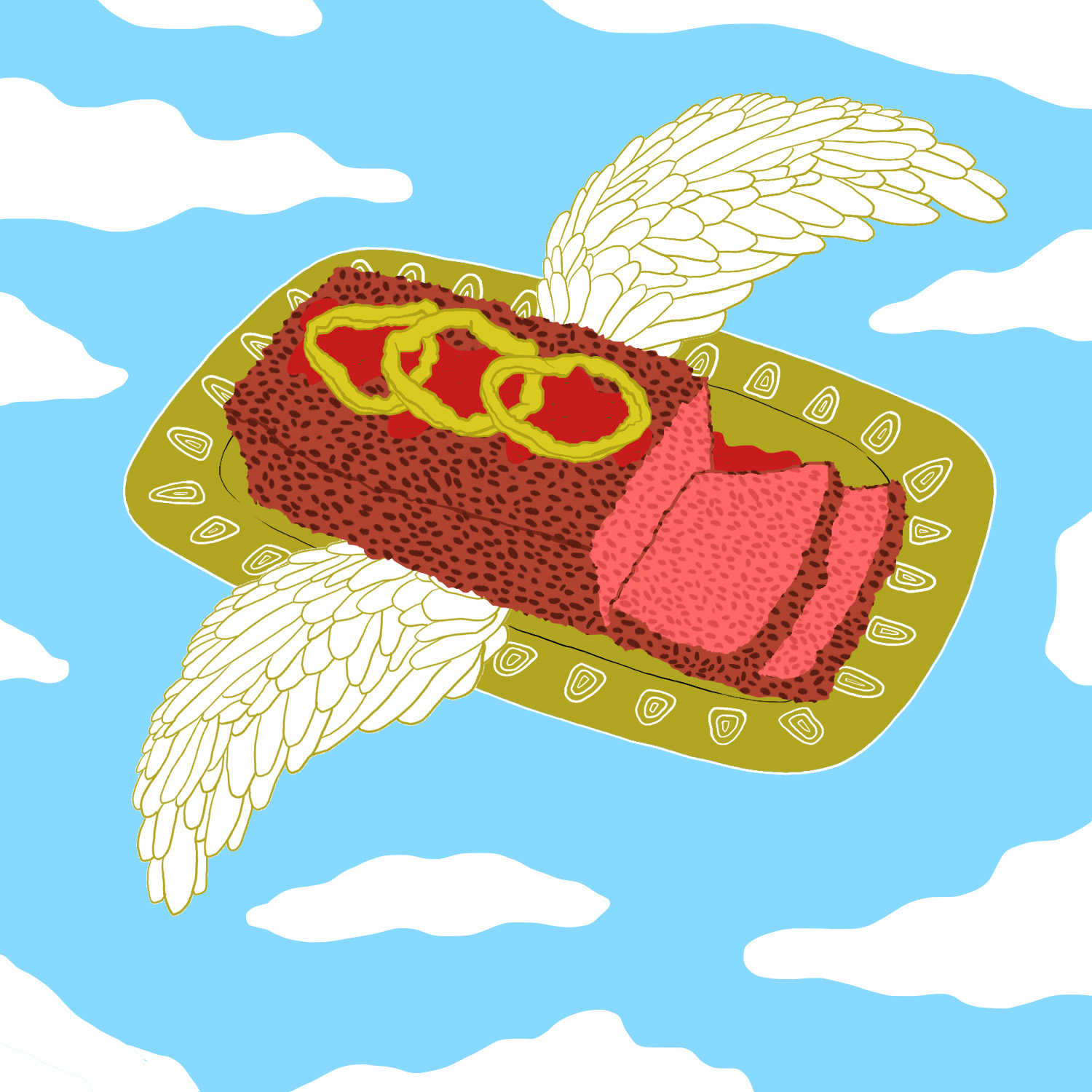 In 1905, as a century of American progress was dawning, Mrs. F. W. Koch of Etiwanda, California, submitted an entire picnic menu to the judges of a Los Angeles Times recipe contest. Buttressed by deviled eggs and butter sandwiches, the main structure—a high, cold veal loaf, moistened with salt pork and butter, seasoned with nutmeg, under a roughcast of crumbs—rose above the spread like a derrick over the Pico Canyon oilfields. It was a taste of what was to come. Meatloaf, like the confidence of a surging America, would spend the better part of the 20th century on the rise.

By midcentury, meatloaf recipes had become the service engines of compendium cookbooks. The 1943 edition of The Joy of Cooking had two formulas for Beef Loaf—one basic, the other with the grassy fragrance of green peppers and the saline tang of a tomato-juice baste. The best-selling recipe book of the 1950s, Betty Crocker’s Picture Cookbook, had nine, including a ham loaf gesso’d together with a mix of crushed Wheaties and peanut butter. It’s as if the pure products of America were animated solely by faith in the nation’s ability to engineer anything, even crazy shit.

You hear an echo of that mad exuberance in A Meatloaf in Every Oven (Grand Central Life & Style), a cookbook by Frank Bruni and Jennifer Steinhauer, both of The New York Times. Bruni used to be the paper’s food critic; now he’s an op-ed writer. Steinhauer is a reporter who keeps an eye on the U.S. Congress. Meatloaf (the subtitle is “Two Chatty Cooks, One Iconic Dish, and Dozens of Recipes—From Mom’s to Mario Batali’s”) is a sort of moonlighting project by work buddies who managed to become actual friends.

Some of the recipes are as easy to throw together as dump cakes. Others (seriously, chefs?) eat up half a day.

That’s one of the most likable things about the book: the authors’ buddy-buddy, podcast-style patter. Because otherwise, well: This is a collection of four dozen recipes for meatloaf, some developed by the authors, others culled from cooks with varying degrees of celebrity (Bobby Flay and Facebook executive Anne Kornblut) and infamy (Paul Ryan and Nancy Pelosi). Some of the recipes are as easy to throw together as dump cakes. Others (seriously, chefs?) eat up half a day.

Obviously you don’t need a book for this—you could scroll through as many meatloaf recipes on your phone, waiting at the butcher counter for your number to come up. But A Meatloaf in Every Oven is a throwback to the shtick-driven cookbooks of the mid-’50s, The Molly Goldberg Cookbook by Myra Waldo, or Sara Kasdan’s Love and Knishes, themselves a reaction to bland, utilitarian compendiums like Joy. Bruni and Steinhauer riff, name-drop with no apparent shame, and toss around pop culture references with stunning deftness. This is from the intro to the “Meatless Loaves” chapter:

Jenn: As we worked on this chapter, I was particularly interested to see where vegetarian inclined cooks took the mandate of a vegetarian loaf. I speak of our dear friend Cathy Barrow…a meat-lover with a vegetarian husband. And I refer to Daniel Patterson, whose San Francisco restaurant Coi specializes in turning veggies into prom queens.

Frank: Prom queens, let us add, who have a better night of things than Carrie did. Since you mention Cathy and Daniel, and I just a bit ago mentioned Melissa Clark, I think this is the moment when we break into song, encouraging readers to sing along with us, and the music in this case is the Beatles, specifically “With a Little Help From My Friends”…

Jenn: Yes. This entire book is like one long episode of Barney & Friends, without the creepiness…

And so it goes, like an extended episode of Adam Ruins Everything: entertaining for a few. Then again, you might never read these dialogues in the first place: You might only pick up the book to make meatloaf, like the three I made. If they proved anything, it’s that, as it was to Mrs. F. W. Koch of Etiwanda and the women in the Betty Crocker test kitchens, meatloaf is still a lumpen slab of aspiration. Only instead of confidence in the future, meatloaf’s become allusive of the past, or of a present whose only mode is reinvention.

“It’s a populist meatloaf,” the headnote reads. “It’s a kid-friendly meatloaf, especially with the tang of raw onions tamed by the cooking of the onions.” The syntax lurches a bit, but I like the tradition bucking up against Mrs. Bruni’s formula, so like the simple all-beef loaves of the early 20th century. Like all good recipes, it has a twist: a sweet-sour liquid (canned tomato sauce, Worcestershire, Dijon, brown sugar, and vinegar) you pour over the top. This turned out well, actually—juicy, with roast beef flavor—and the topping, though I ended up with way more than I could pour on a single loaf, was like less-sweet ketchup. And though I melted the onions in a sauté pan, just like the instructions asked, they didn’t tell me when or where to incorporate them. It wasn’t only the syntax that stumbled.

Make It Again?
Sure—it’s a solid recipe in need of a couple of easy edits.

The headnote says, “We will not apologize for the turkey,” and no apology was needed. This is a meatloaf where seasoning counts (mustard, cumin, cayenne, soy sauce, coriander, rice vinegar), plus a ketchup and Sriracha glaze. The turkey mixture was wet, and the texture, when baked, flirted with mushiness, the only thing that might’ve needed a slight “I’m sorry.”

Make It Again?
Doubtful. I think I’ll look for a turkey loaf with a firmer yield.

You have to wonder, What does April Bloomfield, a chef who grew up in Britain, know about American meatloaf? Not much, it seems: Her meatloaf skips the usual binders and bottled seasonings. Then you decide, How refreshing that she doesn’t. As the recipe suggests is best practice, I ground the lamb shoulder myself, using my KitchenAid attachment and getting a lot of dishes dirty, and shelled out $6.99 for a box of Maldon salt. It’s a simple loaf—just ground lamb, that precious salt, and breadcrumbs, baked in a liquid tomato sauce spiced with cumin and coriander. And it’s really delicious, like kofta, where the one spice is excellent salt. The shoulder gives it a firm, springy texture, the liquefied lamb fat diluting the sauce, both enhanced by thick, sour globs of Greek yogurt.

Make It Again?
Definitely—for the worst hater of meatloaf I know, if only to prove what’s possible when you look beyond nostalgia.