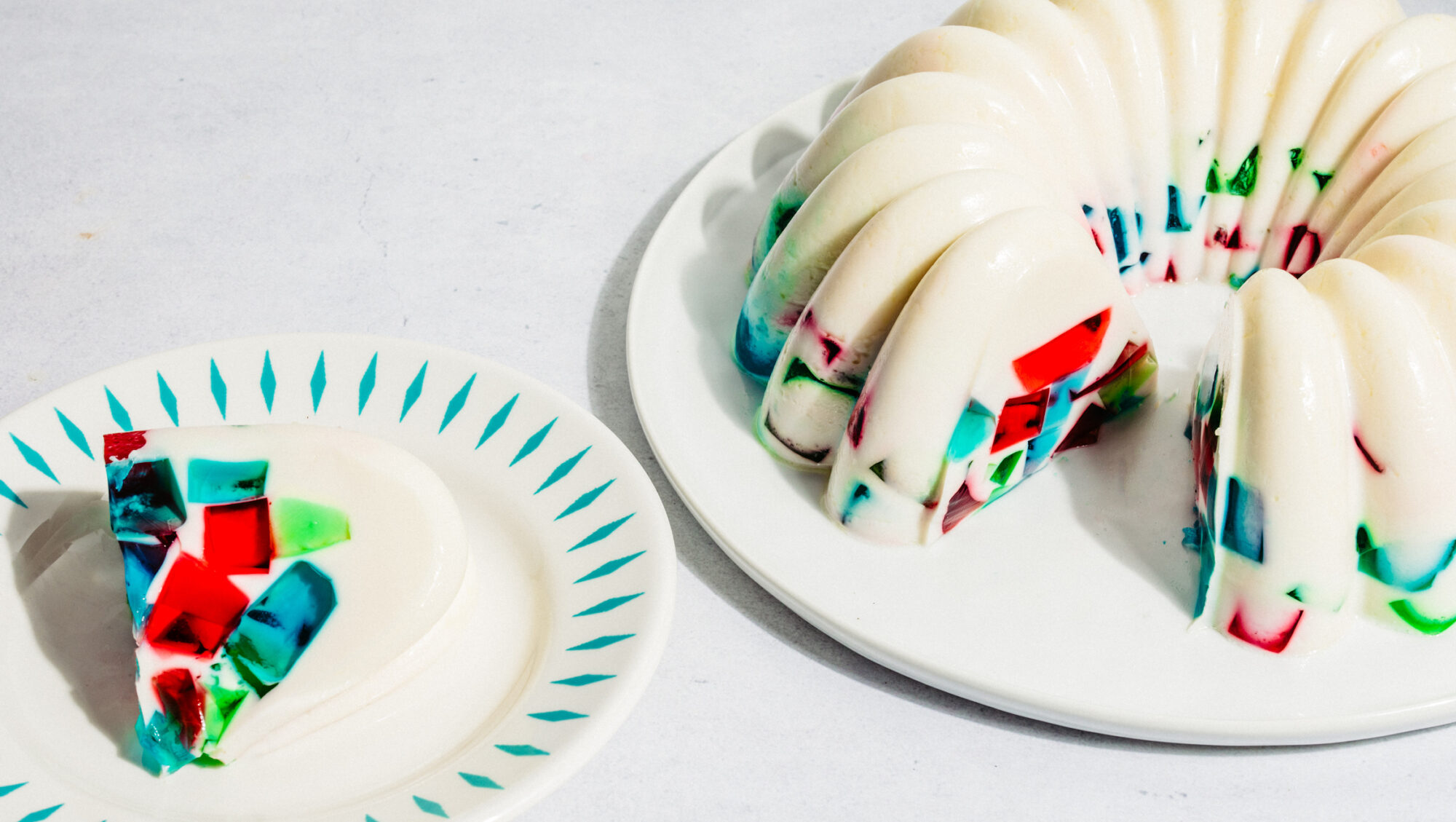 Gelatinas, ptichye moloko, and gelatin-based artistry can be the potluck or dinner party showstopper of the season.

The rest of this holiday season, I am not baking a single pie, cookie, or cake. I am making only Jell-O, and I am going to blow people’s minds.

The luckiest guests of all get Gerson’s version of gelatina de mosaico, an amazing, multicolor all-gelatin cake made with a trio of fruity gelatins (such as mango, pineapple, and passion fruit) that are cut into cubes and suspended in a tres leches gelatin base. When cut and served, it looks like a slice of a kaleidoscope landed on your plate.

Like most gelatin desserts, mosaico is ridiculously easy compared to the payoff—even when you make the flavors from scratch, like Gerson does, using plain gelatin or agar-agar, the vegan gelling agent commonly used across Asia.

For the past couple years, I’ve made some kind of gelatin dessert at least once a month—even if it’s just opening a box and adding Cool Whip to make what the marketers at Kraft Heinz very accurately call a “magic mousse.” Up until now, I just never thought to share what I considered a guilty secret with any of my friends.

I’ve changed my mind, thanks to a wave of fancy gelatins I’ve seen across the internet. In addition to Martha’s—she also does a rainbow of jellies made with fruit juice and jam and an orange spice gelatin cake with fresh citrus, anise, and cinnamon—there’s the snow-white glamour of Esteban Castillo’s traditional Mexican milk Jell-O, or gelatina de leche, which he recently posted on his site Chicano Eats.

I’ve been impressed with bowls of Indonesian lemongrass and lime jelly with pandan and palm sugar syrup from the South Asian culinary site Daily Cooking Quest, and, of course, with the growing field of high-end jelly cake art filled MoMA-level gelatin flowers made with a set of plastic syringes and feather-shaped metal tips.

You can learn how to make your own with a class from Ivy Jelly Artist, a jelly cake maker near Los Angeles, or order them from jelly artists across the country like Solid Wiggles, a pair of restaurant pros in Brooklyn, or the mother-daughter duo Honey Flower Sweets Boutique in Houston, Texas. 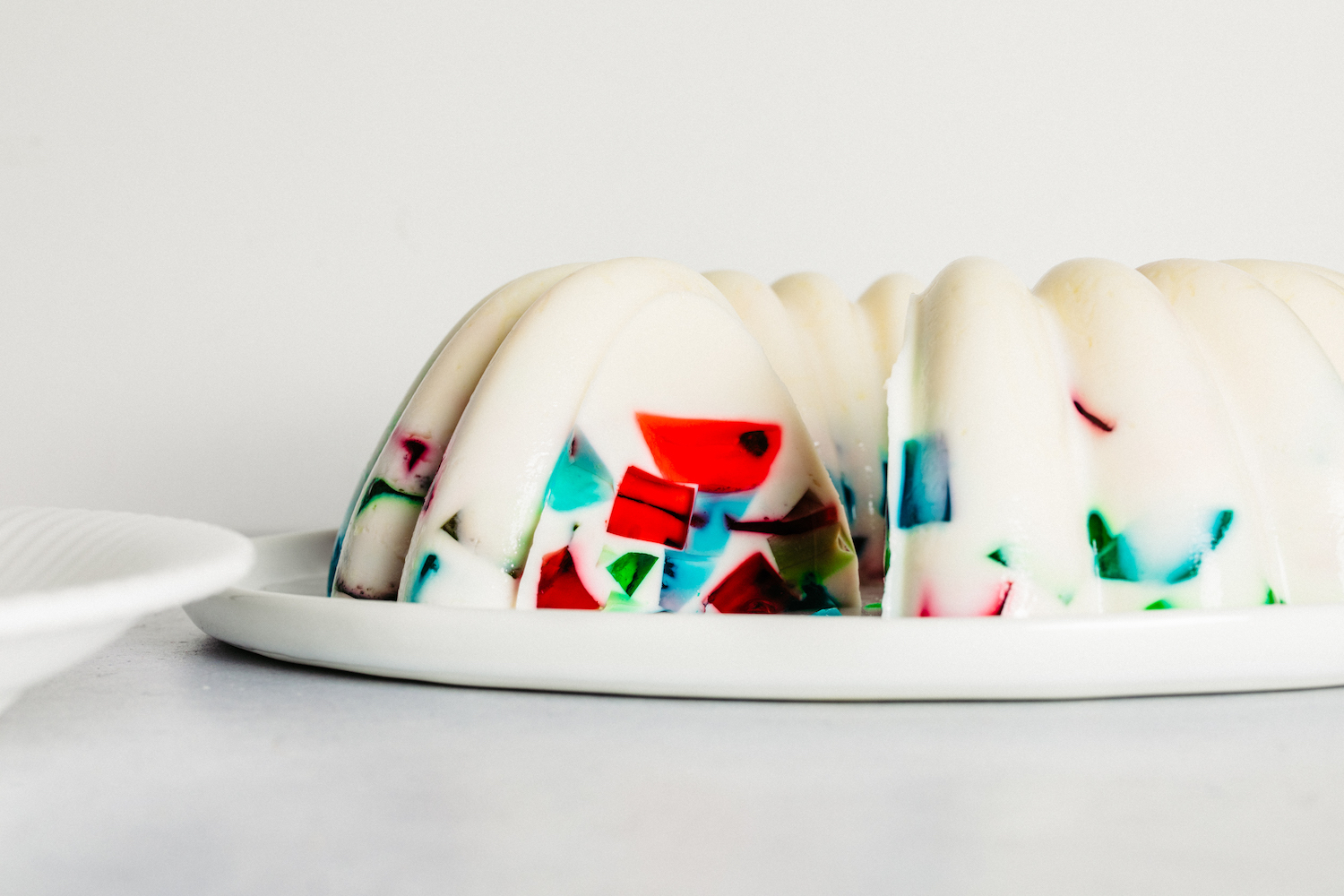 If most of these makers grew up with jelly cake art—it’s well-established dessert culture in Mexico, South America, and Asia—it’s still new to me.

A couple years back, I toured the tiny Jell-O Gallery Museum in little Le Roy, New York, where the fruity powders were invented in 1897 and made until 1964. I went to study their history—which technically begins before the 10th century, when Arabic cooks were already making clear jellies from boiled bones—but I left with a stack of old recipes and a love of the genre.

I started with a cherry-coconut gelatin mousse from 1924 called The Roman Sponge. Next I made the Neapolitan, a chromatic four-layer cake from 1916. I’ve since learned how to blend prepackaged flavors (dark cherry and raspberry!) and created creamy concoctions with almost every form of dairy.

Even if you do go fully packaged and processed, don’t worry—your guests will still love it. Don’t take my word for it, take Fany Gerson’s. When she was growing up in Mexico, says Gerson, “My mother bought nothing artificial. Nothing canned, no sugar cereals—but Jell-O was the exception.”