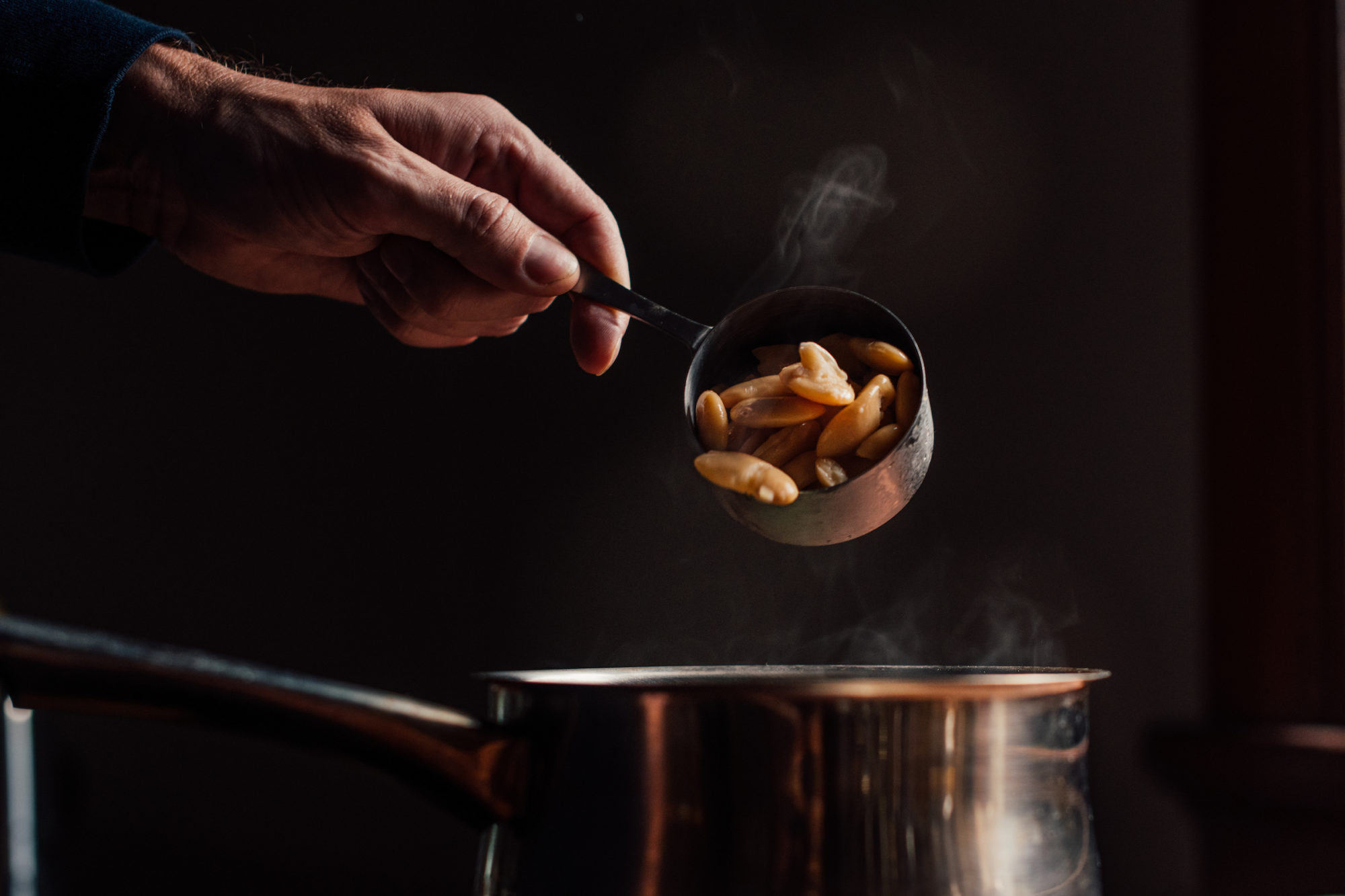 Many years of eating, cooking, and writing about food have left Scott Hocker with many stories to tell. In this occasional column, he re-creates a dish tied to a distant, or sometimes recent, food memory.

It only took a Swiss chard and cilantro bread soup to remind me that memory is wanting, a daisy chain of recollections in a broken, wayward sequence.

I sometimes wander cookbooks and the Internet when I am unsure what I want to cook. Or eat. Recently my fingers strolled across The New Portuguese Kitchen. I have paged through the book a few times, always intrigued. The recipes seem at once manageable and unexpected. Food that speaks a language I know, in a dialect I have never heard. Plus, many Portuguese have a fondness for bacalao, and I like salt cod plenty myself. But this was not a salt cod day.

I wanted to cook something that was quick, with ingredients I had around. Ooh! There it was: a cilantro bread soup with poached eggs, açorda alentejana as the dish is called in Portugal. I started plotting the steps, then—wham!—my mind scurried in a fresh direction. A flash of intense green. Melancholy. Fat white beans. Fog. Endless fog, with splotches of sun.

I had eaten this dish before. But I have never been to Portugal, I reminded myself. Where, when, how? The memory flared into blunt relief: San Francisco. I ate this soup constantly for a few years. It was the mid-2000s, and I was in a grim place. My first true relationship had ended. I knew he and I together was wrong, but it was my first heartbreak and the ache bombinated. I then ricocheted into an even unhealthier relationship. The kind you know is ill-advised. The kind you need because being needed is all that matters.

I lived around the corner from Bar Tartine when it opened. This was the offshoot of the famed Mission bakery, where the coconut cream tarts are legendary and the country bread is peerless. In 2006 at Bar Tartine, bread was the entry point for many of chef Jason Fox’s dishes. Like so much else during those years, I could remember his bread soup in fragments. I was doing a lot of drugs at night, cocaine mostly, and the resultant days were spent with a quavering brain and an exhausted body. Those nights deadened the pain of lost love and the longstanding ideas I had of my minimal worth as a gay man. New friendships were forged, too. Bar Tartine, with its warm staff who became like kin, tall dining counter where I practically had a stool of my own, and Fox’s smart, accessible food, like this bread soup, was a balm. The restaurant was an implacable oak in the middle of a tornado. I recalled the soup’s brightness. I guessed cilantro did that. I remember bread, too, of course. And an egg. The rest of the dish? No idea. Damn memory.

I texted Fox and told him I was doing a story about the soup and wanted the recipe. We talked on the phone, and I could tell it was strange for him to finger a recipe from his past. His present is at Commonwealth, one of my favorite restaurants in the States, where this soup has never appeared on the menu. At Bar Tartine, though, the soup was around for most of his three-year run. He could still remember most of the steps during our call, and as he walked me through the recipe, my remembrance began to crystallize. A few days later, Fox sent me the full recipe. I split fans of Swiss chard into stems and leaves, then sliced the stems into thin half-moons and tore the leaves into large, rough pieces. I sautéed the stem bits with onion until almost soft, then added the leaf chunks. While those wilted, I added cilantro, garlic, and a load of olive oil to a food processor and blitzed until the three merged into a rough puree. Bread was torn into craggy pieces and toasted in olive oil. Eggs were poached, and a can of fat white beans was opened and rinsed.

I inhaled as I began to assemble a few bowls. In the past, this soup was not just good; it was important. Through the opaque lens of memory, had I imbued the dish with false deliciousness? When the soup’s primary function was its familiarity—its steadfastness when I could barely find stillness of my own? I warmed some chicken stock and added the chard and beans, then the cilantro puree and salt. More than I would have imagined, even considering my stock was unsalted. Into the bowls went the bread, followed by the poached egg. A pause. It smelled right and good. Smell can trick, though, just like memory. I plunged a spoon deep, retrieving a blop of egg, a bean, a fainting lick of chard, and a hunk of bread. I slurped. The soup was sublime. Simple, but bursting with green and crunch and silk and lusciousness.

Nostalgia is pointless. Latching on to an idealized past seems to me a surefire way to scorn the now. Still, it can be useful. Food doesn’t have to be delicious to matter, if we decide it should. It can hold weight beyond its possible deliciousness. Sometimes nostalgia can hurtle into the present and, through taste, you see the present and past align. Memory still errs. Reliably so. Sometimes, though, memory can right itself.