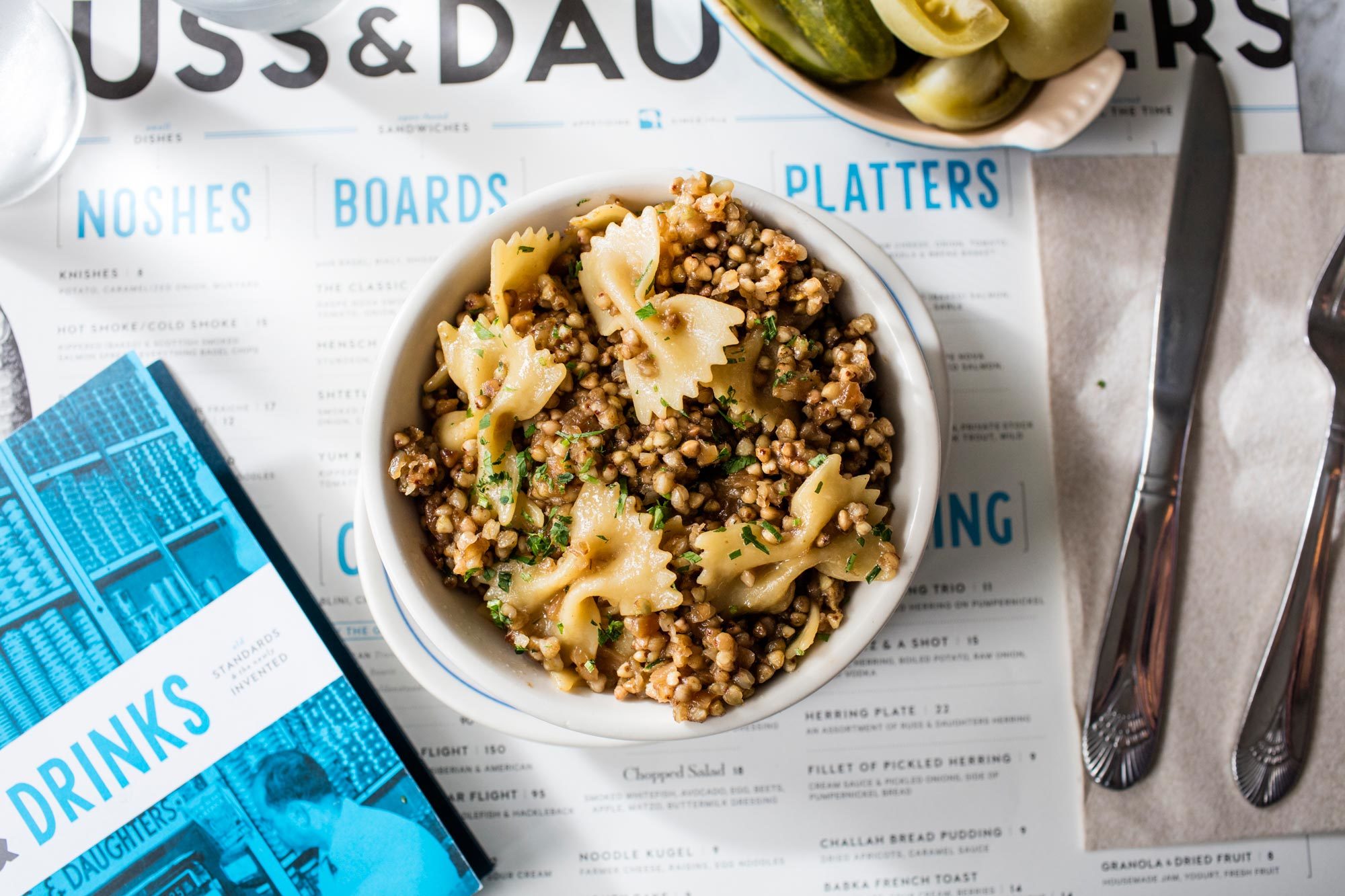 Kasha varnishkes is a satisfying side dish that deserves a turn front and center.

Latkes, brisket, bagels: These are the warhorses of Eastern European Jewish cuisine. But for those who want to dive a little deeper into this historically rich style of cooking, the roasty, starchy kasha varnishkes awaits.

Wander into Ukrainian East Village Restaurant, 2nd Ave Deli, Katz’s Delicatessen, or any other deli or diner that serves classic Eastern European food, and your eyes are likely to pass right over this common side dish of toasted buckwheat groats (the kasha) and bow tie pasta (the varnishkes) flavored with onions and mushrooms. That won’t be the case at Russ & Daughters, an appetizing shop that serves its carefully selected bow ties sometimes with a poached egg on top. “Most of our customers not only know what kasha varnishkes is, but for them, it’s their comfort food,” says Niki Russ Federman, a co-owner.

If you give it a chance, you’ll be rewarded with a dish that sets the goalpost for ideal toothsomeness. Chewy and nutty grains stick to firm pasta, all coated in a perfect slick of oily, sweet caramelized onion and earthy mushroom flavors. While it’s generally served as an appetizer or a side dish, it’s totally satisfying as a meal unto itself.

What’s intriguing about kasha varnishkes is that neither of the two main components are prevalent in the Ashkenazi cuisine we eat in the United States. Buckwheat is actually more traditional to parts of China, Japan, and Southeast Asia, and it spread to Eastern Europe from there. In Russia, Ukraine, and Poland, “kasha” refers to any grain that’s toasted and cooked into porridge. It’s only in Jewish cuisine that it refers specifically to buckwheat. The toasted groats on their own have a powerful and distinct earthy aroma, with a texture that is honestly a little rubbery. If your familiarity with kasha varnishkes comes from watching Seinfeld, hopefully now you have some context for Elaine saying the Costanzas’ house smells like kasha. Other Jewish dishes that use noodles, like kugel (a baked noodle or potato pudding) and chicken noodle soup, tend to call for egg noodles instead of wheat.

The word “varnishkes,” for the noodles, is a bit more mysterious and is only used in this dish. It’s likely a Yiddish adaptation of the Ukrainian word “varenichki,” which means “stuffed.” Cookbook author and Jewish culinary historian Joan Nathan says her research led her to a Yiddish cookbook from the Wolff Brothers buckwheat milling company from 1925. The book has a recipe for kasha stuffed into a noodle-dough dumpling. Nathan says that packaged flat egg noodles (lokshen in Yiddish) may have been pricey for home cooks, so squares of dough pinched in the middle were an affordable substitute.

It’s a trick that’s easier than folding dumplings, but it still allows the noodles to act as little scoops for the buckwheat so that you get both in every bite. Later, when dried Italian pastas became widely and cheaply available, farfalle became the stand-in.

Like so much of traditional cooking, there are a million ways to prepare kasha varnishkes. Commonly, a beaten egg is mixed in to give it some added structure, and the whole megillah is baked in a casserole to meld the flavors and get the top a little bit toasty.

Some recipes use sliced, sautéed mushrooms (like mine below), and some use finely chopped chicken livers. Traditionally, chicken or goose fat is used, which is both rich—and historically rich. Goose fat, especially, gives the whole dish a delightfully wild, gamy flavor. That said, most contemporary recipes use vegetable oil, and butter is also quite tasty.

There’s no consensus on how finely ground or cracked the kasha should be. I’m lucky to have both a Polish market and a Russian market close to my home in South Norwalk, Connecticut, and between the two, I can find buckwheat groats from cornmeal-size to steel-cut-oats-size, as well as barely toasted to medium brown. My preference is coarser with a medium toast. You may be at the mercy of what’s available in the grocery store, so don’t stress about it. I’d encourage you to try toasting the grain yourself so you can achieve your ideal level (and because untoasted buckwheat may be easier to find).

Whenever I cook the groats, I start by toasting them with the aromatics and then add hot cooking liquid to this mixture. Aside from the typical mushrooms and onions, you could add leeks, garlic, and maybe a little parsley on top or some rosemary in with the kasha. Crumbled toasted walnuts would increase the toastiness factor. Buttery rye breadcrumbs atop the baked casserole would be delicious if you’re looking to add a third carb. And you can go absolutely crazy with the mushrooms, using a wild blend or whatever locally foraged delicacy catches your eye. It’s a meal on its own, but a slab of brisket and/or roasted carrots are great accompaniments.