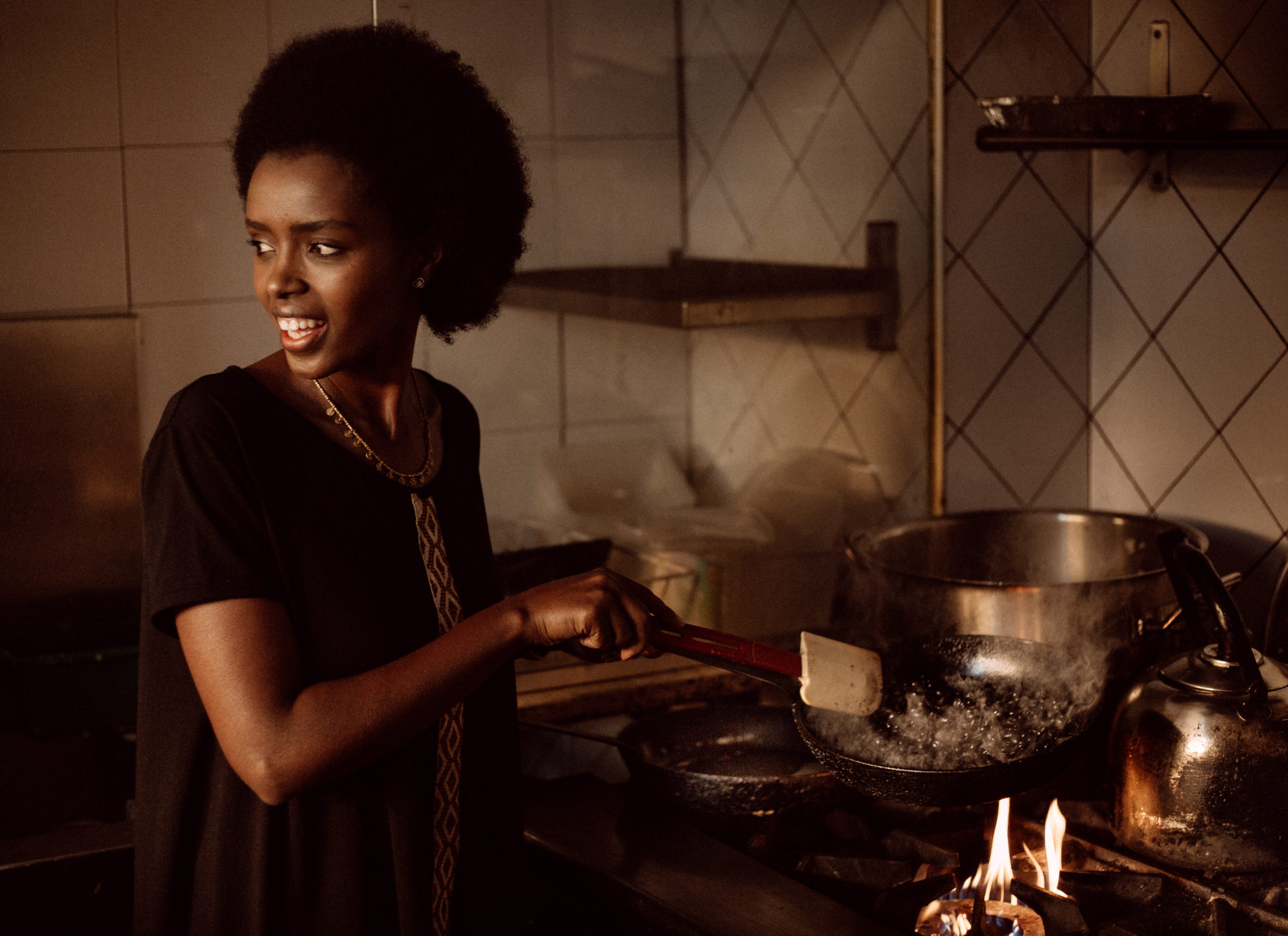 How some Ethiopian Jews are living—and cooking—in Israel almost 40 years after their arrival.

Naftali Aklum extinguishes his cigarette at a café in Beersheba, a desert city in southern Israel, having just told me the story of his family’s emigration from Ethiopia. We’re about to wrap our conversation when he reveals quite shockingly that he didn’t eat injera, the spongy, pleasantly sour flatbread, the most iconic of Ethiopian culinary staples, until he was 24 years old.

“Growing up here was not easy,” he says, squinting in the sun as he licks the edge of a piece of rolling paper and seals it around a few more pinches of tobacco. “It was the first time that this society had to deal with something new: black people.” As a teenager in the mid-’90s, he was harassed because of his dark skin. Not one to swallow someone else’s thorny, heckling words, the verbal brawls tended to turn physical. Who would end up at the police station after the fights had been broken up? Aklum and other people who looked like him, not their white opponents. The table at Balinjera, an Ethiopian restaurant near Tel Aviv’s Carmel Market.

“A lot of us felt that if we deleted our history as Ethiopian Jews, it would be easier to be part of Israeli society,” he reveals. “So we deleted.” Aklum stopped speaking his native Tigrinya and chose to eat pita bread and Israeli salad instead of shiro be kibbe, stewed lentils and chickpeas. He was ashamed of his parents, who didn’t speak Hebrew. “We were their voice every time they wanted to go to an office for an appointment.”

Aklum was born in Tigray, Ethiopia’s northernmost region, the youngest of 12 children. His father was wealthy—he owned 17 properties and tracks of land—and at Shabbat, the Aklums would bless dabo, the traditional Ethiopian honey-laced bread, instead of challah. Yet they gave up everything when returning “to the land of their forefathers” became a possibility. (The prevailing origin story explains Ethiopians Jews as a tribe lost after the destruction of the First Temple.) “They always knew that Ethiopia didn’t belong to them,” Aklum says of his community, which now makes up roughly 1.5 percent of Israeli society. “And to be buried in the land of Israel? That was just, wow.” His family walked to Sudan on foot, eventually arriving in Israel in 1980, when Aklum was six months old.

His much-older brother, Ferede, worked with the Mossad to get Ethiopian Jews from Sudan to Israel. A character based on Ferede Aklum will be portrayed by Michael K. Williams in The Red Sea Diving Resort, an upcoming Hollywood film that will dramatize the migration. Many Ethiopian Jews shared the Aklums’ motivation: the dream of returning to their holy land. Others were fleeing famine and civil war. For everyone, the trip was arduous. Thousands died along the way.

In 2013, Tel Aviv–based chef Ruthie Rousso visited a transition camp in Gondar. (It has since closed.) “The Jewish Agency could not handle the flow,” she says, adding that after that first wave in the ’80s, Gondar was flooded with generations of Ethiopians trying to obtain passage into Israel. Some were stuck in camps, where conditions were harsh, for years. “I watched the people who were not allowed in, and my heart was broken. It was the first time in my life I encountered hunger, and it changed my culinary narrative forever.”

Less than 1,000 Japanese people live in Israel, but there are over 150,000 Ethiopians. “How come we don’t know their staple dish?” Rousso asks of the quintessential spiced chicken stew.

“I think the problem is with the Israelis, and not the Ethiopian Israelis,” says Rousso. After years of analyzing the “whys,” she’s come to think it’s all about international politics. “Ethiopia is not a vacation destination, it’s not a source for start-ups, it’s not known for its influence on Europe or any other country, and it has no military power. It is located at the bottom of the international popularity list. Why should we learn to like its food?” Fanta Prada at her restaurant, Balinjera

“Oh, we do that!” says Fanta Prada, one of the owners of Balinjera, an Ethiopian restaurant near Tel Aviv’s Carmel Market. The dish is currently off-menu, but she or chef Dawid Barhani will make it for regulars who know to ask. And the majority of those regulars are not Ethiopian. “Opening in the Kerem Ha’Temanim neighborhood, where people come from all over the world, was deliberate,” says the lawyer turned restaurateur. “It says, ‘I want people to know about us.’”

While the main courses at Balinjera are traditional Ethiopian dishes, Prada appeals to Israeli tastes by offering appetizer and dessert courses, something she says is not classically done in Ethiopia. She and Barhani also tone down the spice, incorporating cranberries, walnuts, and raisins, and serving a roasted eggplant starter drizzled with tehina—black Ethiopian tehina, not the lighter-colored version popular in the Middle East.

Back in the States, I mention Rousso’s experiment to Prada—well, to Prada’s niece, Ashager Araro, who is translating from English to Hebrew and back for us on a conference call. Most of the restaurants serve heavily spiced, “hardcore Ethiopian food,” she responds. “If you’re not accustomed to it, it’s harder to appreciate.” (Araro says that even she has trouble stomaching the heat level sometimes.)

But in the three years since Balinjera has been open, a few more Ethiopian restaurants have come onto the Tel Aviv scene. Much of this, says Prada, has to do with the growing popularity of vegetarian and gluten-free lifestyles. (Balinjera offers beef and chicken, but it’s easy to eat meatless there, as it is in most Ethiopian restaurants.) “Our kitchens give you good, healthy food.” Teff, the grain used to make injera, is especially high in fiber and iron.

Many Ethiopian Jews shared the Aklums’ motivation: the dream of returning to their holy land. Others were fleeing famine and civil war.

One strong example of the mélange of Ethiopian and Israeli cuisines exists—in the United States. Beejhy Barhany, Aklum’s cousin, arrived in Israel when she was seven years old. After serving in the army, a requirement of all Israeli citizens, for two years, she traveled to New York. “I loved the diversity,” she recalls. “It was really beautiful.” She’s been a Harlem resident for 19 years now.

In 2014, Barhany opened Tsion Cafe in Sugar Hill, where the menu lists shakshuka, tibs, a kind of Ethiopian stir-fry, and a grass-fed beef burger with awaze, a sauce made with berbere spice and Ethiopian honey wine. For breakfast, there’s lox and caramelized onions on injera. “I’m not just Ethiopian,” Barhany says. “I’m Ethiopian, Israeli, and American. I want to celebrate all of it.” Her ultimate goal is to open a Tsion in Addis Ababa as well as either Tel Aviv or Jerusalem.

“We all borrow a little bit from everybody everywhere and then tweak it,” she says. “There’s nothing wrong with that, as long as we can celebrate it and acknowledge where it comes from.”

While the “intertwining” is good, so too is maintaining tradition. “It’s about representing ourselves and our own history,” Prada says. “We want to give people access to our culture, and that only comes from their trying classic foods.” At the encouragement of some friends, Aklum traveled back to Ethiopia when he turned 30. He was reluctant—”I always thought, ‘That’s a third world country, why would I need to go back?'”—but what he ultimately saw was “a beautiful, beautiful place.” He visited the village where he was born, where he heard stories about his parents. After that, he says he felt much more comfortable with all of his identities: Jewish, Ethiopian, Israeli, black.

While on the trip, Aklum’s father suffered a stroke, and he was in the hospital when Aklum returned to Israel. “I leaned down and whispered into his ears, ‘I’m ashamed that I was ashamed of you all these years.'” Ten days later, he passed away. “For me, it was closing the circle with my father,” says Aklum.

When our conversation in Beersheba is really over, I ask if I can take Aklum’s photo. He obliges, but not until he removes the tie holding his dreadlocks into a ponytail.

“I’m having these dreadlocks because we were looking for role models, and we didn’t find any within our community,” he says, referring to his youth. “Our parents taught us to be Jewish and to be Israeli, but no one spoke with us about how to respect ourselves as black people.” Aklum traveled to Jamaica, where he heard about “this guy” Bob Marley. “He was the one speaking with us about us being black. A lot of black people hate themselves, you know, but he was saying ‘lively up yourself.'”

Aklum listens almost exclusively to reggae music, and he tells the Ethiopian Jewish story professionally, leading workshops and tours in Israel. He will send his daughter on a trip to Ethiopia when she’s old enough. “I want her to know that her family comes from a country with so much history,” he says. “She should be proud and love herself as a black woman.”

Their home base, though, will always be Beersheba.

Naftali Aklum photo by the author

Julia Bainbridge is the former food editor of Atlanta magazine and a James Beard Award–nominated writer. Formerly an editor at Yahoo Food and Bon Appétit, she has also worked at Condé Nast Traveler and Food & Wine, and her writing has appeared in Playboy, Organic Life, Jarry, Brutal, Bake, Paper, Man Repeller, and Food52, where she was the online publication's first writer in residence. She's also the host and creator of The Lonely Hour, a podcast about loneliness that’s not a bummer.