Get a free recipe
Subscribe
Cookbooks, Not Restaurants, Are Giving Black Foodways An Identity
By: Therese Nelson Illustrations: Richard Chance 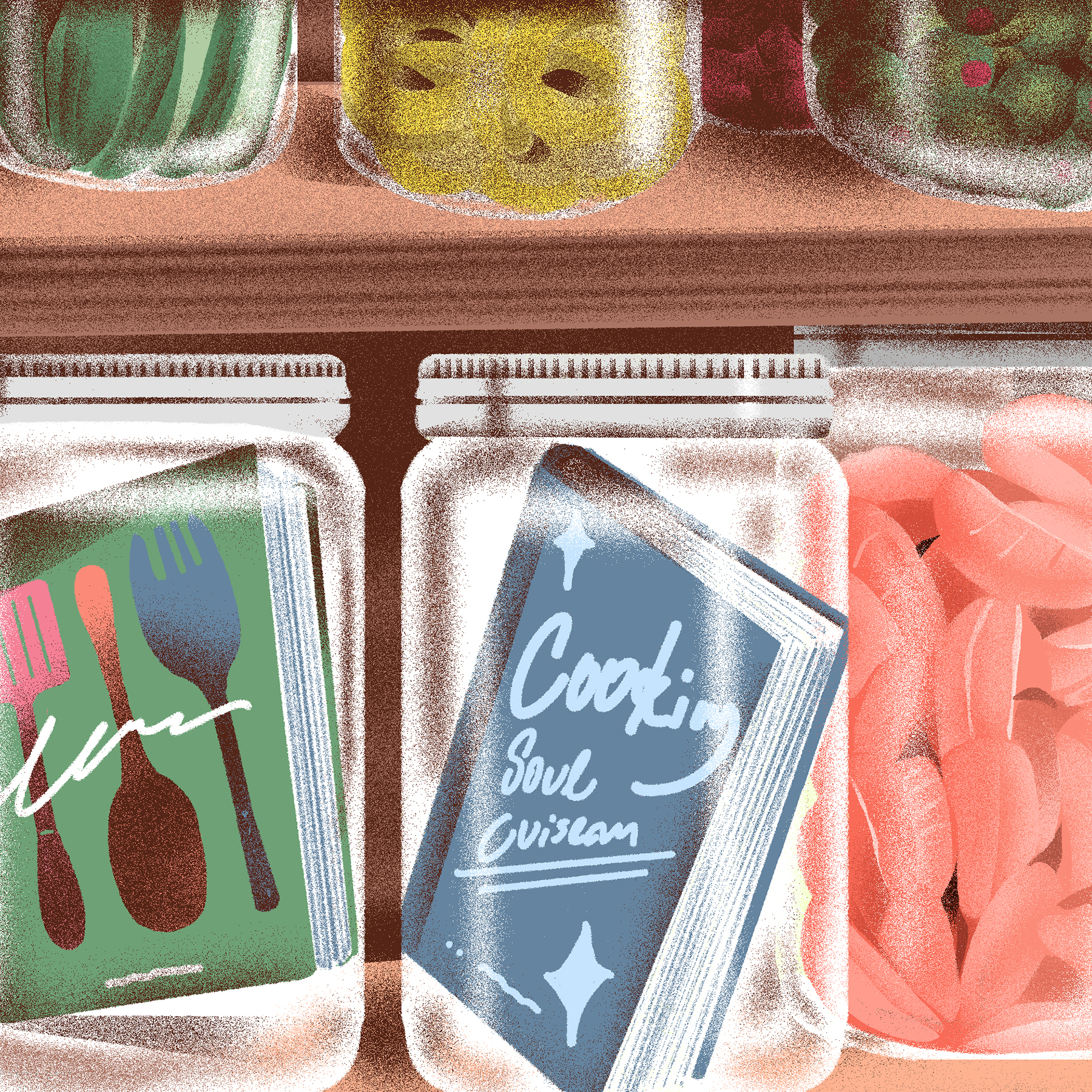 I remember the first time I ever heard Etta James Sing “At Last.” I’d never really understood the blues on an elemental level before, but when I heard her sorrow and her raw humanity in those honest words, I understood instantly the power of the form. The first time I read Taste of Country Cooking, I had a similar reaction. Miss Edna Lewis told us, via elegant and personal narrative, who she was through food. She wove a gorgeous and complex tale of blackness, using historical context to make the case for the power, value, and general dopeness of the black lives that created Southern cooking. The most striking part, though, is that she did it all without leaning on the overwhelming stereotypes of blackness the 1970s is known for.

The impact of that book has gotten me thinking about the power that kind of cultural focus could have in the current culinary moment. Black chefs are just coming to a place where our heritage has room in the restaurant space to be explored as a subject. American dining has matured enough, and diners are culturally curious enough, to give chefs the latitude to step outside of the narrow European aesthetics that have defined most of the modern American dining story. But I’m wondering, given what we know about the power of books, whether cookbooks might not be the battleground that will help drive this transformation—even more than award-winning dining establishments.

Recently New York Times reporter Julia Moskin spoke to chef Todd Richards about his new book, Soul. It’s a unique book in that Richards has attempted to use his personal identity as a black person, his decades of professional cooking, and the African diaspora to provide a baseline of culinary vocabulary. The book is over 500 pages of culinary authority and uses ingredients as the catalyst to express the breadth of the black experience in American cooking. By exploring how global influences and modern cooking have converged, Richards gives us the permission and the scholarship to expand our thought process about what black foodways are and can be. This is a bold and ambitious mission that he manages to pull off brilliantly. Richards has wielded the power of the cookbook to express in 150 recipes what would take years to do in a restaurant setting, giving us an ingredient-focused encyclopedia to work from that could define how an entire generation of chefs will cook.

Another recent book, one that is maybe my favorite of the year, is Between Harlem and Heaven by Alexander Smalls and Joseph “JJ” Johnson. This book is a perfect jewel box of memory that captures the magic these two chefs created at the now closed Cecil Restaurant in Harlem. If Soul is about broad strokes, Between Harlem and Heaven is about specialization. Chefs Smalls and Johnson traveled the world before the opening of the Cecil in 2012. They cooked through West Africa and Asia and workshopped the menu for over a year in preparation for opening. The result was unqualified acclaim, a tide change in the way the fine-dining industry viewed black foodways, and a restaurant that was named the year’s top restaurant by Josh Ozersky in Esquire in 2014.

Johnson and Smalls ate and cooked and read in pursuit of a concentrated and defined narrative to build a restaurant around. They came to Harlem, the epicenter of black culture in America, and used the African diaspora to create a culinary vocabulary that was this beautifully stylized expression of black cookery and did it in the most unbothered, culturally confident posture I’ve ever experienced in a restaurant setting. The space itself was so breathtakingly beautiful, the music always lit, and the food at once stunning and relatable. It made for an experience that expressed blackness so completely that it would take my breath away every time. The Cecil enjoyed nearly five years of life (it closed in late 2016) and changed the country, yet what’s left is this cookbook that memorializes and preserves all that work and perhaps provides a foreshadowing of what’s to come.

I’ve been resistant to locate the entirety of the African-American food story in the realm of soul food because it’s a monolith that so specifically ties to the civil rights era. It’s becoming a limiting cultural catchall for black identity when it comes to food, and because black chefs have been so tentative about using their heritage in their professional work, soul food hasn’t really changed from how it was in the 1960s. What Soul and especially Between Harlem and Heaven have been able to do is to use the framework of the traditions—community, ingredient focus, black culture, and the African diaspora—to create a fresh take on what a new soul-food identity could look like for the current era. They take the cookbook form and do in one book what it would take millions of dollars and a fickle dining public to achieve in the restaurant setting—and I wonder if the publishing world isn’t where this cuisine will get its modern identity.

Without a doubt, there are exciting new black voices emerging in the kitchens across the country. Mashama Bailey in Savannah, Georgia, is making the Grey a destination with her sophisticated low-country cuisine and architecturally stunning Greyhound Bus depot. Kwame Onuwachi in Washington, D.C., is fusing the entire African diaspora in one restaurant by using his own unique personal heritage to experiment with traditional dishes. Duane Nutter at Southern National in Mobile, Alabama; Nelson German at Alamar in Oakland, California; and Chris Scott at Butterfunk Kitchen in Brooklyn all use soul-food tradition and their classical training to give new vitality to the canon. But maybe the most intentional kitchen where blackness is front and center on the plate is at Junebaby.

In Seattle, Eduardo Jordan begins with history and context in cooking the food of black culture. He already had a hit restaurant with Salare but decided to do what Miss Lewis did back in 1976 and create a personal culinary story that didn’t ask for permission but defined blackness without qualification. From the encyclopedia of culinary terms and dishes on his website to the research that goes into each dish, Jordan has made a restaurant that celebrates the black experience in American dining and shows the country what the future could look like for black chefs.

I mention all of this because all these brilliant chefs need cookbooks. The work they’ve put into these wonderful restaurants needs to be crystalized in book form, because as wonderful as these spaces are, they aren’t eternal. Books are. The work they’re doing is creating the next level of cooking that has been 300 years in the making. I talk a lot about black foodways because in my opinion it’s a term that more accurately describes the depth of the contribution black chefs have made to American cooking than “soul food” is.

Our work is so ingrained in the fabric of this country, and to tell these stories is a kind of public trust. Books are powerful in that they live forever. They define the times they exist in, and at their best they give voice to brilliant people who maybe aren’t heard in other mediums. Cookbooks are vital to furthering food culture. With their professional photography, graphic covers, and physical form, they bring with them instant authority. When we open a cookbook, the author grabs our attention, and the instruction and narrative that follows is not simply about a delicious meal, but about the humanity of the person sharing their story.

Black chefs are finally coming to a place where we have room in the marketplace. In the 1950s and ’60s, it was Edna Lewis and Princess Pamela. In the 1980s and ’90s, it was Alexander Smalls and B. Smith. Today it is dozens of chefs all searching for the support to define what their contribution to the culinary world could look like. Our foodways made the chefs and writers committed to them outliers in their historical moments. My hope is that book publishers and media spaces see the extraordinary nature of this opportunity and help more chefs and writers shepherd this exciting new scholarship into the modern era. Judith Jones took a chance on Edna Lewis, and look what we got.