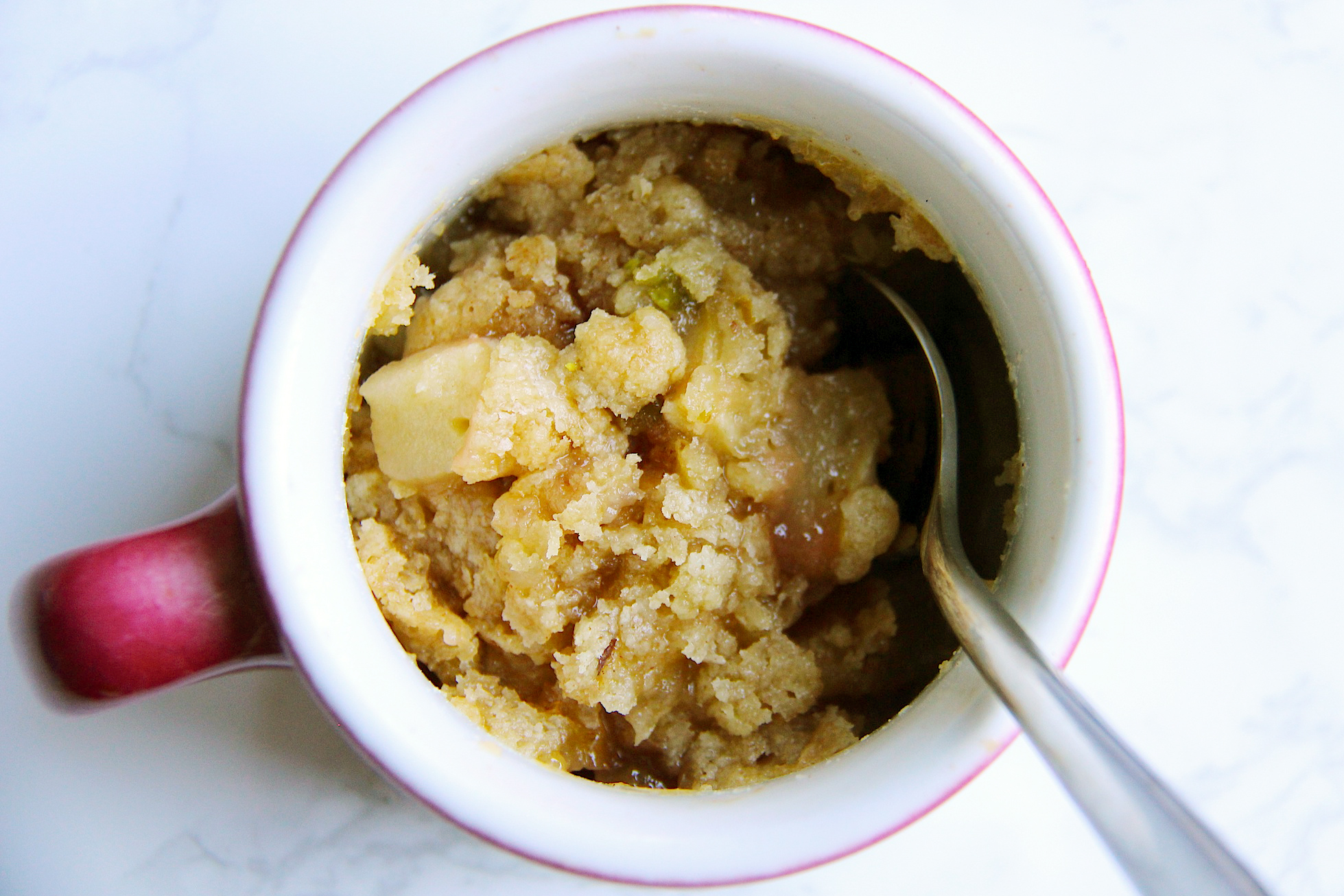 Bakers love crisps and crumbles because they come together quickly and can easily feed a crowd. But the easy-to-scale dessert is just as sweet when it’s made for a party of one.

“Wait. That’s it?” At least one student was taking careful notes during a baking class I taught last year. She looked surprised as I sprinkled a crumbly, buttery mixture atop a jumble of halved apricots and whole raspberries and slid it into the oven. “You don’t need a mixer? You don’t need to roll anything out?” I felt my face curl into a smile as I took a second to remember the moment, so many years ago, when I’d first learned the trick of the crisp. “That’s it,” I assured her. I peeked at what she’d scrawled at the top of her notes: “EZ,” underlined three times.

That ease is probably why I make crisps and crumbles more than any other dessert. I used to love throwing one together at the very last minute to bring to work or a casual party. I’d set it on a table and wait for the inevitable “What is this?” A crumble’s craggy, jammy beauty lies in turning a few ingredients—usually just fruit, butter, sugar, flour, and salt—into a dessert as satisfying as pie, and as simple to make as shortbread or snickerdoodles. It takes minutes to put together and roughly the same amount of time to cook. It’s not a show-off, like a lattice-topped tart, and photographs of the rough-hewn dessert won’t make anyone Instagram famous. But chopping fruit, tucking it under a cookie-like blanket, and letting the oven transform it into something bubbly and fragrant still feels like a satisfying secret.

Officially, it’s a secret meant to be shared. The crisp or crumble (there is some regional discrepancy over the nomenclature) was originally developed as a way to stretch fat during times of rationing in England during World War II. It’s part of a family of baked fruit desserts with onomatopoeic  or autological names, including buckles, grunts, and cobblers. These are recipes designed to “double or triple easily to feed a crowd,” according to the Oxford Companion to Sugar and Sweets.

But the same characteristics that make crisps and crumbles easy to scale up make them just as easy to scale down—which is useful when, instead of feeding a crowd, you simply want to feed yourself.

Fortunately, I’m not alone—at least in this line of thinking. In her book Solo: A Modern Cookbook for a Party of One, chef Anita Lo gives everyone, from lovelorn singles to people who prefer the company of their pets, instructions on how to fly solo efficiently in the kitchen. The compendium of smart recipes extends to desserts and includes a recipe called The Only Crumble Topping You’ll Ever Need When Baking for Yourself. Lo says she likes to make crisp topping in a massive batch at her home in Long Island “at the beginning of every summer, and keep it in a big bowl in the back of the fridge.” The raspberry and blackberry bushes that grow wild in her backyard come in handy throughout the season. “Whenever there’s overripe fruit lying around, I top it with handfuls of the stuff and”—Lo makes a wizard-like motion with an imaginary wand—“dessert is ready.”

But there’s no need for farmers market fruit or a backyard garden: A crisp can be made with whatever’s around, from canned peaches or pineapple to hothouse berries and mango flown in from Mexico in the dead of a North American winter. Even dried fruit, plumped up with a bit of moisture, works. What matters is getting a few rough proportions right in the topping so that the butter and dry ingredients cling to each other, and achieve a, well, crumbly or crispy texture in a hot oven. Lo’s crumble topping is a simple mix of flour, brown sugar, granulated sugar, butter, oats, and a pinch each of cinnamon and salt. It holds together in clumps the size of whole walnuts and is easily squeezed or pressed into lumps as large or small as you’d like.

Crumble topping can keep for a month in the fridge like this, well covered, but Lo’s recipe in the book is smart for another reason. It’s designed to be used not just as a crumble topping, but also for individual tarts and pies. The topping can be pressed into ramekins or cupcake tins or individual tart or pie shells to make the base for a miniature peanut butter and chocolate pie, a petite Meyer lemon tart, or a salted butterscotch pie for one.

This added practicality is something I’d forgotten about in my recent time baking solo. It reminded me of the words of legendary cookbook author and publisher Judith Jones in 2009’s The Pleasures of Cooking for One: “The secret of making cooking for one fun and creative is not to think of a meal as self-contained but to understand that home cooking is an ongoing process, one dish leading to another.”

These days I tend to feel my way through my crumbles, too weary to pull my book of go-to recipes off the shelf, too impatient to get my scale out of the cabinet. Unwrapping a stick of butter with one hand, I pull off a nice knob and drop it into a cereal bowl. A small handful of flour goes in next, and around twice as much sugar—half brown if I’ve got it. Then a pinch of salt, and maybe a dash of cinnamon or sometimes a generous sprinkle of rolled oats, chopped nuts, or fine cornmeal. I like using one hand to mash it together over the sink, which catches any flour that escapes. I’ve done this so many times I can do it without looking; moments later I’ve got a dry paste.

Then I slide the bowl into my fridge and address the fruit. Apples, always around, are excellent; bananas, ripe and a little spotted, can work, too. Citrus and melon aren’t quite right, but any other tree or vine fruit is welcome. I’ll peel mangos, bananas, and pineapple, but everything else stays in its skin. The small cutting board that lives behind my sink gets pulled out while I rummage for a small knife to cut the fruit into pieces large or bite-size. They go into a heatproof mug or the nearest ovenproof dish. I pour the crumble mixture on top without smoothing or fussing and pop it into a hot oven for around 10 minutes.

When my kitchen smells like browned butter, when the juices from the fruit are thick, when the top is the color of a golden retriever, it’s done. A baked crumble is good warm or at room temperature, but with Jones’s words echoing in my head, I’ve spooned day-old cold crumble on yogurt for breakfast, and even baked leftovers into a coffee cake.

Bill Addison, the Los Angeles Times‘ restaurant critic and a former pastry chef, also loves crisps, “for their versatility… I love the texture when you nail the combination of fruit and topping, the kind of soft crunch of the streusel…. I eat a lot of it for myself for breakfast,” he says. When he wants to make a crumble a little bit more special, he pulls out a trick he read in chef Nancy Silverton’s Pastries From the La Brea Bakery. “I cook a vanilla bean in butter until the butter browns, and then strain that over the fruit before adding the crumble topping,” Addison says. “It adds this incredible depth.” It feels like just the thing to do when you really want to treat yourself well.

I’ve been nursing a pet theory that I decided to run by Lo: Maybe you shouldn’t cook for anyone else until you feel comfortable cooking for yourself. When I ask her about it, she laugh-cries, “It’s like that Whitney Houston song!” Indeed, being solo in the kitchen can feel like the greatest love of all.

RECIPE: A Crumble for One