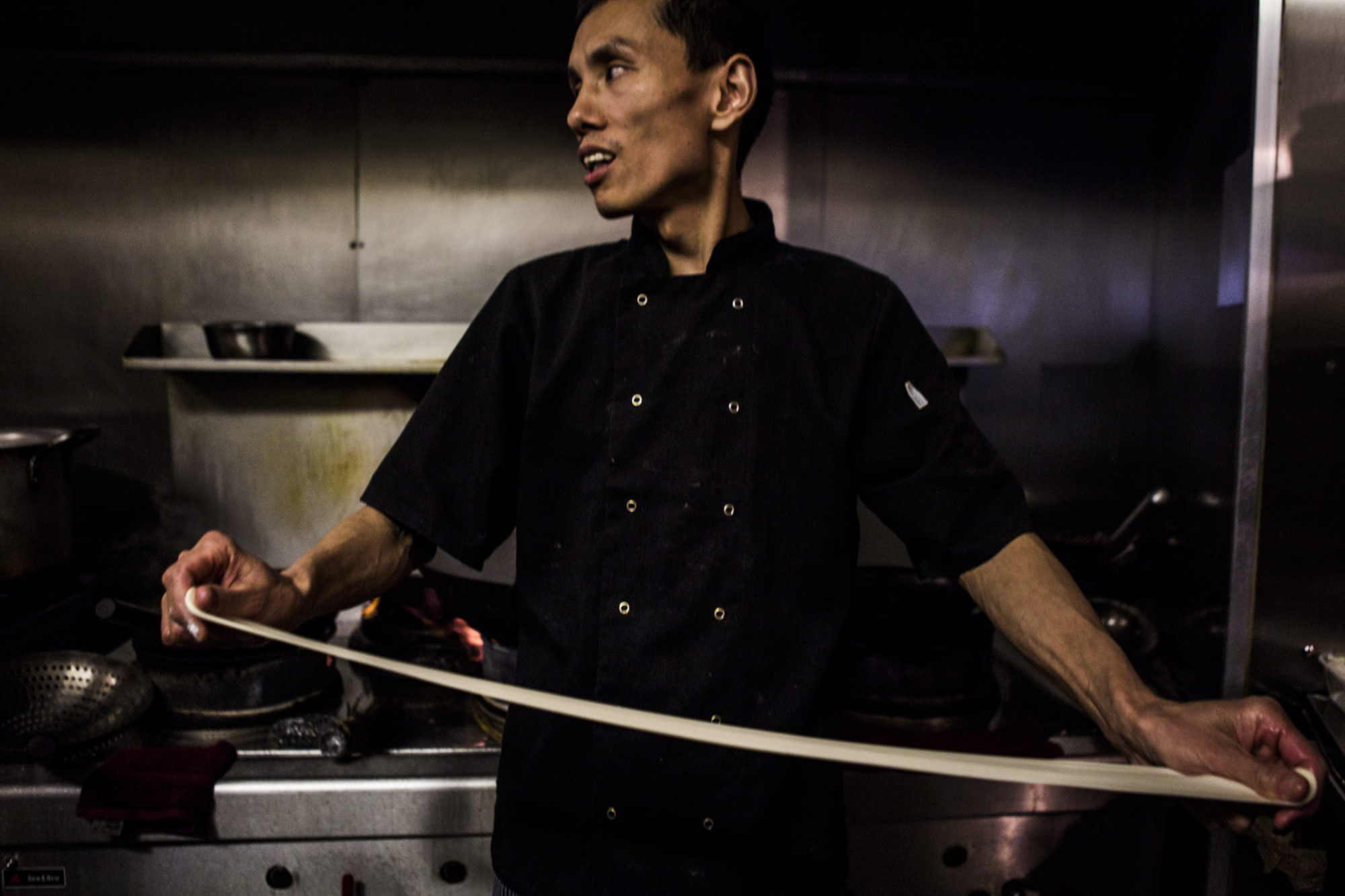 On a Friday night in North London, a short queue is forming outside of Xi’an Impression, a tiny Chinese restaurant across the street from Emirates Stadium, where Arsenal Football Club plays. Inside, chef Chao, the owner, assists his servers with their duties. Leaning over a table, he patiently describes the unfamiliar dishes—ones his mother used to make for him—to inexperienced diners.

The city of Xi’an in northwest China is one of the four capitals of ancient China and once served as the terminus of the Silk Road. As a result, its cuisine bears as much resemblance to dishes in the Middle East as to dishes in the rest of China: skewers of lamb sprinkled with spices; cold noodles made from starchy water; chunks of beef stuffed into what appears to be naan bread. Chao’s signature dish, however, is biang biang noodles—a simple food originating from the region.

To encounter your first biang biang noodle is to be surprised by its appearance: Of a farcical width, a single biang biang noodle is about as wide as a dozen or so uncooked spaghetti strands placed side by side. Hand cut and tenaciously elastic (these are wheat noodles), each strand possesses a density somewhat higher than that of a sheet of cooked lasagne. A typical serving of biang biang noodles might be just a single complete strand. Lathered in spicy chile oil, the dish is usually served with some sort of green vegetable—usually a head of steamed or wok-fired bok choy—to give it a pleasantly contrasting crunch. When asked about the dish’s bizarre appearance, Chao minces no words: “Biang biang noodles were made to be thick and lengthy, originally made by poor people in the countryside.” As a humble staple amongst the working class, biang biang—and noodles in North China in general—emerged as a cornerstone of the local cuisine. Given the climate differences between Northern and Southern China, rice, so commonly associated with Chinese food, quickly transforms into a luxury as one creeps up the map in latitude. “Put simply, rice requires a lot of water, which is abundant in South China and relatively lacking in North China, says Dr. David Wank, a professor of sociology at Sophia University in Japan. “North China grows a lot of other grains, such as wheat, corn, sorghum, and millet.” So it’s possible to go for a long time in Shaanxi, the province of which Xi’an is the capital, without eating rice.

For the chef, making these extraordinarily wide noodles doubles as an exercise in dexterity. Once the dough is adroitly kneaded to give the noodles a calculated chewiness, the chef freezes midframe. Grabbing opposite ends of the chunk, he begins to slowly pull his hands apart, stretching the dough while flicking his wrists in a perfectly fluid motion. With each gesture, the amorphous white blob slams against the counter, causing it to extend longer and longer until it finally reaches its ultimate shape. For those watching, the chef’s tranquil motions are a fascinating counterpoint to the chaos that engulfs the activity—the vigorous slapping of the dough against the counter, the loud staccato cracks upon impact.

The name “biang biang” is onomatopoeic: It refers to the particular noise that’s so crucial to the noodles’ creation. “The written traditional forms evoke in me the sheer gungfu [i.e. skill] involved to master the hand-pulled process,” says professor Jack Tchen, the founding director of the Asian/Pacific/American Institute at NYU and a cofounder of the Museum of Chinese in America in New York, who also occasionally teaches an interdisciplinary course on the globalization of noodles culture at Gallatin. Though it sounds simple, there’s complexity in the word “biang,” which is written with 56 brushstrokes—the most of any Chinese character. “Within the words are elements of this challenge, silk threads (ci) and length (chang) and the central Asian means of mobility besides walking in the form of the horse character,” he continues, describing the character as “an embodied word with surplus historical significance.” It’s also a noodle that’s becoming increasingly popular in the Western world. Across the pond in New York City, Xi’an Famous Foods, co-owned by Jason Wang and his father, immigrants from the Xi’an region who settled in New York, now boasts 12 shops in three boroughs, selling folk dishes like liangpi, a cold gelatinous noodle dish; lamb pao-mo, a soup with dissolved bread chunks inside; and of course biang biang noodles. Since the middle of this decade, similar restaurants have emerged across America, like Chicago’s Xi’an Cuisine and Seattle’s Miah’s Kitchen.

By introducing folk dishes like biang biang to a new environment, chefs like Chao have helped usher in a new perception of Chinese food in the West—a vibrant new picture diverging from the stock images of neon orange chicken in a Styrofoam box—while simultaneously filling a niche for the Chinese community abroad. Chao, who also owns another restaurant across town that specializes in Sichuan cuisine, still sometimes finds himself explaining to naïve consumers why he doesn’t serve prawn crackers, but the soft-spoken chef suggests that savvy foodies are starting to understand the intricacies of Chinese cuisine, identifying, for instance, Sichuan dishes from its liberal use of chiles. “Chinese food is becoming a kind of fashion amongst young people,” Chao tells me.

There is a lot of truth in what Chao says. I recently ate at a “cool” Taiwanese bao restaurant in South London where I happened to be the only Asian person in the room. I’ve also dined in an eatery in East London where I watched a gang of white chefs re-create purportedly “authentic” Chinese dishes using so-called Western ingredients, serving the concoctions to an overwhelmingly white clientele. But there was still something that made me feel uneasy about Chao’s choice of words. A high-street retailer like H&M might create bland simulacra of runway hits for the mass market season after season until the trend dies slowly in the clearance racks of Target; a hairstyle from a marginalized minority might fall into vogue, celebrated only after a white designer sends it down the catwalk; and a nonwhite food might be “discovered” by the mainstream only after having been co-opted by opportunistic white restaurateurs. That, I thought, was just the way “fashion” goes. Growing up Chinese, a familiar rite of passage was the aggressive probing of my diet by my non-Chinese peers. Even under the most benign line of questioning—asking me whether I’ve ever eaten dogs or cats—I, like so many others, often found myself defending my perceived exotic taste for dishes like offal slice or pig intestines. Thanks to chefs like Chao, the widespread availability and consequent acceptance of regional Chinese cuisine has allowed a new demographic of diners to discover all the possibilities in between the well-known Chinese archetypes—like noodles, rice, and dumplings—alleviating the pressures I once experienced. Instead of seeing red, blue, and green, savvier eaters can now discern between nuanced shades of turquoise, maroon, and cyan—having developed a new awareness of possibilities that have always existed.

But is it possible to wholeheartedly welcome something yet still dread its arrival? Though I patiently wait for the day when I no longer have to defend my love of pig-blood curd, there is something that unsettles me about eating it in a room filled exclusively with people who might have scoffed at the idea had it not appeared on their Instagram feed. Perhaps we are on the cusp of biang biang’s eventual arrival. After all, biang biang noodles are unequivocally delicious. Their ascent seems, to me, inevitable.

Edwin Jiang is a writer living in London. He mostly writes about fashion, but occasionally other stuff too.