Get a free recipe
Subscribe
The Best Thing to Make in an Air Fryer Isn’t Fried
By: Ben Mims Illustration: Joanna Neborsky

If you want to get the most out of your air fryer, think of it as a tiny hot oven that can toast things really well.

Haters will say it’s just an adult Easy-Bake Oven. Terrence Doyle, writing for TASTE, even suggested would-be air fryer users should simply bake their food, as if that thought had never crossed their minds. Across other reviewing sites, the consensus was similarly disparaging. “You don’t need one of these things,” wrote Joe Ray on wired.com. Michael Sullivan, writing on The Wirecutter, claimed the popularity of air fryers could be boiled down to the fact that “they’re endorsed by celebrity chefs such as Gordon Ramsay and Emeril Lagasse.” Ouch.

When I made the decision last fall to write an air fryer cookbook—Air Fry Every Day—I was already facing an uphill battle by wading into this war: how to appease both the culinary movers and shakers of New York, who both write and control the institutions that run the reviews, and the users all over America who were obsessed with their air fryers? Looking like a small R2D2, the air fryer made every self-respecting food snob, predictably, turn their nose up at its kitschy design and claims of making fried food, typically devoured hedonistically in a dimly lit bar after a couple cocktails, healthy and virtuous. The air fryer’s trash can appearance gave naysayers a too-easy metaphor for the food it produced.

But throughout the rest of the country, the air fryer had been embraced full force. Growing up in the South, I knew that deep-frying was a way of life, albeit an unhealthy one, and eating wholesomely there, or anywhere else in the country where eating nutritious food at restaurants is not an option, was a challenge. The air fryer, which is essentially a small, efficient convection oven, tapped into that need to produce healthy meals at fast food speeds.

Users, seemingly unfussed by the name, took it for what it was: a quick, simple way to cook healthy food. Sure, some used it to cook traditionally deep-fat-fried foods, but most were cooking boneless, skinless chicken breasts, broccoli florets, sweet potatoes, and any and all meal-prep staples to maintain a balanced diet. Could they make the same food in the oven or on the stove? Sure. Could they do it a little bit quicker and better with the high heat and air circulation of an air fryer? Yes. After working with convection ovens as a restaurant pastry chef—and understanding their unique advantages over conventional ovens—I was excited at the prospect of having this small version at home to play with. I started out by making a list of every iconic deep-fried food anyone could ever want (in the U.S.A., at least), then testing each one out to see how it fared. Chicken wings? Check. Calamari? Check. Onion rings? Took some time, but check! Beer-battered fried fish? No, because there’s no oil to catch and set the batter, but fish cut into “fingers” and coated in cornmeal instead? Big check!

Then I started tinkering with less-standard “fried” fare. I knew that a common, and my favorite, way to cook eggplant was to deep-fry it, plain and with no coating, until soft, then drain off all the excess oil it absorbed. When blasted in the air fryer, the same creamy interior effect was produced, but the outside also set crispy—and there was no need to waste a roll of paper towels on blotting the oil away. I was sold. On traditionally grilled foods, it worked surprisingly well, too, lightly charring corn cobs, whole zucchini, and sweet potatoes, which I later broke down into smaller pieces. But the use that excited me the most was fried grains.

As any self-respecting East Coast–based food lover does when visiting Los Angeles, I had gone to Sqirl several times over the years and loved chef Jessica Koslow’s crispy rice salad bowl. There, she deep-fries cooked rice until crunchy, then drains away the excess oil. In a restaurant kitchen, where the industrial-sized deep-fryer is always on and there’s ample, easily cleaned metal work surfaces to spread out on, it makes sense. At home in my cramped, pitifully ventilated kitchen, I never deep-fried. But with the air fryer, new possibilities started presenting themselves.

I tried cooking raw farro in the air fryer, which turned out to be a bit of a waste of time. But then I tried throwing some cooked farro in the air fryer with a little oil, salt and pepper, giving the grains a stir every five minutes or so to make sure they browned evenly. After 20 minutes, what came out of the air fryer was shockingly similar to the grains I ate with gusto at Sqirl. The grains’ already tender insides were now complemented by a crispy, caramelized exterior. I quickly tossed the fried farro with some leftover mustard vinaigrette and topped it with a fried egg, and while it wasn’t the exact experience as at Sqirl, the grains were crunchy and bright and sated my craving for that salad across the country.

After that success, I began dreaming up more grain salads akin to those at Sqirl. I fried different grains, coated them with a simple dressing, and then tossed in other components to fill out the dish. Fried mushrooms and crisp, raw Asian pears worked brilliantly with fried quinoa and mint for a hearty, fall/winter salad. Couscous, crispy on the outside and chewy-tender on the inside, soaked up a red wine vinaigrette and played well with the cucumbers, tomatoes, and feta in the Greek-inspired salad. As for rice, I kept it simple, like Koslow does at Sqirl, so you can taste the wonderful flavor of the aromatic grains of jasmine rice. I tossed in a few florets of broccoli, which got crispy-singed at the tips, and served the salad with a quick, stove-top version of General Tso’s sauce to drizzle over the top. Once composed, it makes an ideal side dish for chicken thighs, salmon fillets, or glazed tofu.

Is the air fryer a little bit science-fiction-y and gimmicky in name and appearance? Yes, but that has always been the allure of any new cooking appliance, whether it was a regular oven, the microwave, or the Instant Pot, because each offered the freedom from the labor of a particular type of cooking. If it takes an appliance called an air fryer to show home cooks the value of healthy, fun cooking, then it’s a step in the right direction.

RECIPE: Toasted Couscous and Lemon With Cucumbers and Feta 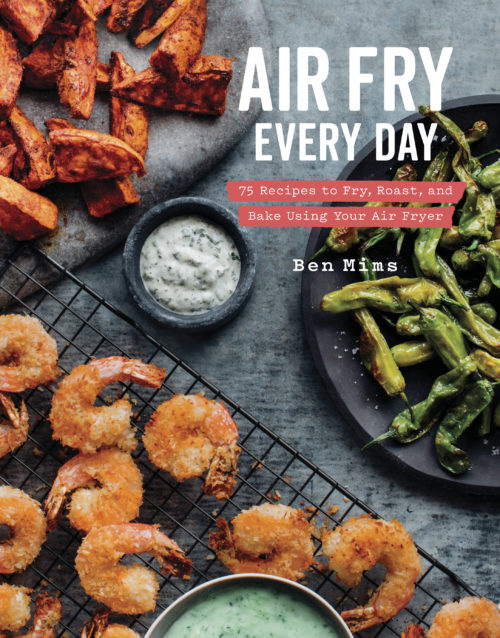