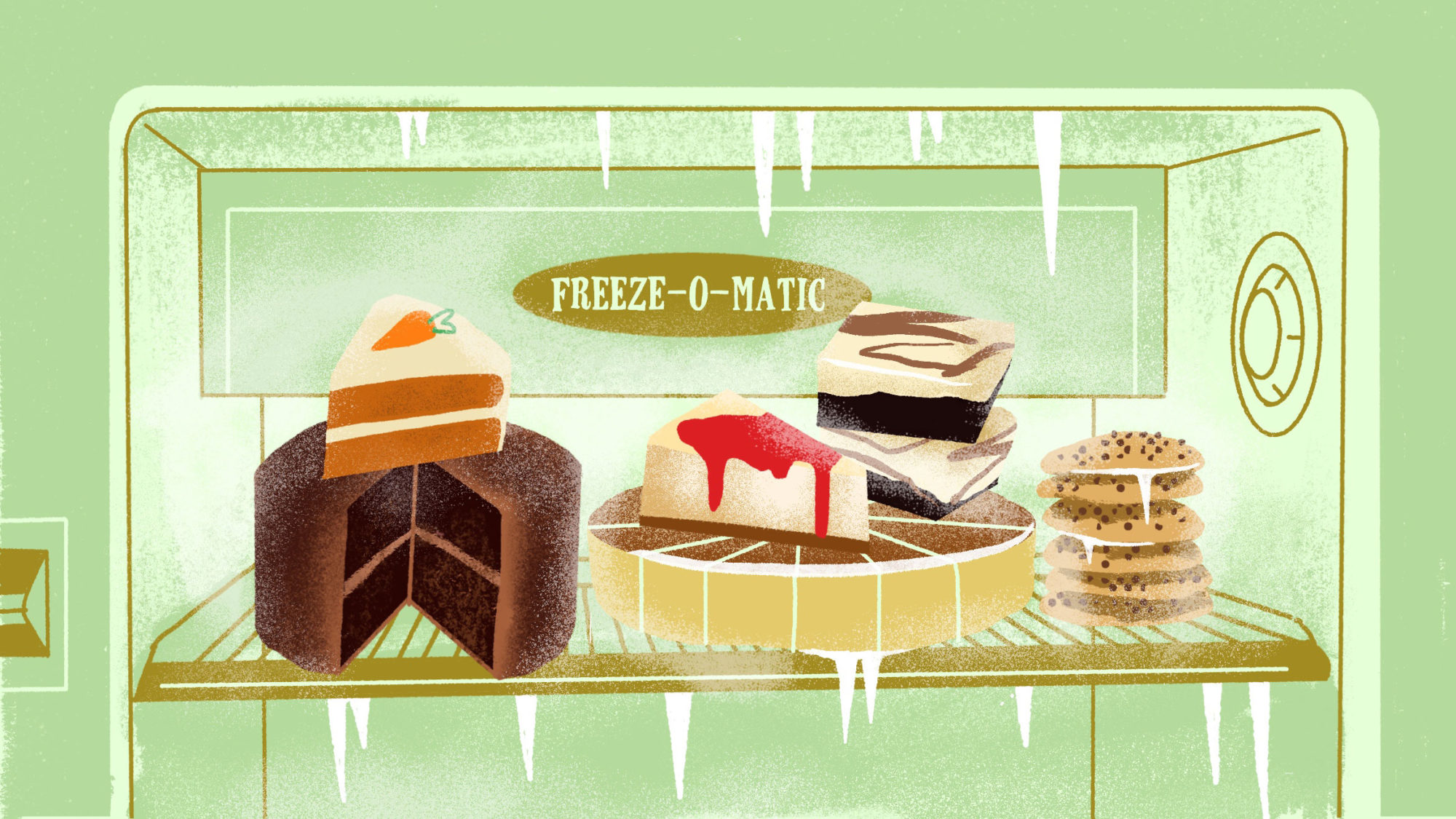 Your freezer is a tool for improving taste and texture, from flourless cakes to peanut butter miso cookies.

Every year, between Memorial Day and Labor Day, a somewhat predictable deluge of no-bake desserts takes over the airwaves and Food Internet. Icebox cakes, popsicles, and no-churn ice cream recipes make the rounds, accompanied by calls to “beat the heat” and warnings to “avoid your oven at all costs.” But waging a war against your oven during the summer would be a mistake—and not just because you’d miss out on the joys of a warm galette bursting with peak-season blackberries or a crisp, buttery peach crumble.

You’d also miss out on a whole world of classic baked goods that taste even better in a semi-frozen state. If you’ve ever stashed a box of Thin Mints in the freezer, you might know what I’m talking about. Eaten directly from the freezer, their sweetness is tempered, and they become crisp, minty, and more refreshing. This same sort of subzero alchemy can bring out the best in a sweeping selection of baked goods, from moist flourless almond cakes to chewy chocolate chip cookies to silky peanut butter cream pies. A stint in the freezer subdues sweetness and adds structure. No disrespect to icebox cakes, but a slice of cold chocolate cake just hits you differently.

If you’ve noticed that your last bite of ice cream tastes sweeter than your first, or that the longer you nurse a beer, the more bitter it tastes, you’ve observed the fact that temperature plays an important role in our perception of flavor. Nik Sharma, a trained molecular food biologist and cookbook author whose forthcoming cookbook, The Flavor Equation: The Science of Great Cooking, is all about unpacking the science of flavor, points out that cold temperatures suppress sweetness, while warmer temperatures intensify our perception of sweetness and bitterness. Interestingly, salty and sour flavors are not impacted by temperature.

No disrespect to icebox cakes, but a slice of cold chocolate cake just hits you differently.

Desserts that verge on cloyingly sweet are great candidates for a freeze. The amount of sugar required to provide proper structure in things like a chocolate blackout cake or a salted caramel blondie can sometimes be overwhelming. But eating them in a semi-frozen state actually allows you to taste some of the more subtle flavors that get masked by sweetness at room temperature.

For the same reason that sugar and fat help maintain the smooth, creamy texture of ice cream in the freezer, they keep baked goods from turning rock solid. Sugar lowers the freezing temperature of water, which creates smaller ice-crystal formations. When you put a baked good, like a black-bottom brownie or a carrot cake, in the freezer, the water present begins to change from a liquid to a solid, forming ice crystals. Large ice crystals create coarse textures, and small crystals create smooth, creamy textures. Fat contributes to a creamy mouthfeel in addition to impacting our perception of coldness. The fattier something is, the less cold it will feel.

Buttery cakes like devil’s food cake, pound cake, and flourless chocolate cake fare much better in the freezer than airy chiffon or sponge cakes, because they have a high ratio of sugar and fat in relation to flour. Sturdy and moist, these cakes have a low freezing point, thanks to all their sugar and fat. Their small ice-crystal formations ultimately keep them soft even when they are very cold, which could turn a sticky flourless chocolate cake into a fudgy dream. Sharma points out that oil-based cakes have a leg-up on their buttery friends in the freezer, because oil is a pure fat that has a lowering freezing point than butter. Butter contains fat, water, and milk solids, which can sometimes separate in the freezer. Glossing a layer of cream cheese frosting, buttercream, meringue, or ganache onto your cake before freezing it will add a cool contrast to the interior of the cake.

Similar to cakes, cookies with a high ratio of sugar and fat to flour stand up well in the freezer. Bar cookies, like brownies and blondies, are one of my favorite things to freeze, because it dials back their sweetness and makes them more fudgy. Drop cookies, like the classic chocolate chip, are a little more complicated because, depending on the varied ingredients and the way they are combined, including the chocolate-to-dough ratios, they can be thin and crispy or dense and chewy. To create drop cookies that will freeze well, expert bakers suggest upping their moisture content by swapping some (or all) brown sugar for white, adding extra eggs, incorporating whole wheat or nut flours, and slightly underbaking them. Mix-ins, like fruit, nuts, and chocolate, also add moisture. Dry, firm cookies, like biscotti and shortbread, do not taste great frozen because they contain very little moisture and become crumbly.

A Redditor boldly declared, “If you’ve never eaten a frozen muffin or cupcake, you have never lived.”

When it comes to pies and tarts, it’s best to think of them in terms of two distinct components: crust and filling. Pastry crusts have very little sugar and moisture, which is what gives them their signature flaky texture. In the freezer, they can become tough, bland, gummy, and difficult to cut through. Cookie and nut-based crusts, on the other hand, stay crisp and delicate. When it comes to fillings, fresh fruits, which are made up of mostly water, will freeze into solid, icy masses. Pies with creamy fillings, like chocolate cream and Atlantic Beach pie, which are stabilized with plenty of eggs and sugar, will develop a luxuriously silky mouthfeel in the freezer, taking on an almost soft-serve-like texture. Condensed milk is a great secret weapon to achieve super smooth, creamy fillings because it predominantly consists of milk fat and sugar. Cream cheese is another frozen all-star ingredient, because of its mildly tangy flavor, high fat content, and stabilizers. Whipped and folded with other ingredients like meringue or whipped cream, it will take on a mousse-like consistency.

Regardless of how much you optimize a baked good for the freezer, your efforts will be in vain if you don’t freeze it properly. Freezer burn is caused by moisture ice loss, aka ice crystals sublimating from the surface. As long as something is thoroughly wrapped or covered, it will remain in great shape. A double or triple layer of plastic wrap remains the best barrier (with a layer of foil added if your freezer is home to unpleasant smells). However, if you’re planning on consuming a stash of cookies or brownies over the course of a month, it’s okay to skip the plastic wrap and freeze directly in a resealable glass container or zipper storage bag. If you’re freezing a frosted cake or a cream-topped pie, let the cake set in the fridge for two hours, or until the frosting has started to harden, in order to prevent it from sticking to the plastic wrap. While most baked goods tend to taste best in the one to three month range, from a food safety perspective, a frozen year-old cake is perfectly safe to eat.

I’m not the only one who’s had the idea to stick a pan of brownies in the freezer. On r/unpopularopinion, a subreddit thread dedicated to, you guessed it, unpopular opinions, there are numerous threads devoted to the merits of eating frozen baked goods. A Redditor boldly declared, “If you’ve never eaten a frozen muffin or cupcake, you have never lived.” The number of upvotes suggests many folks agree. Meanwhile, on r/teenagers, someone who I suspect is relatively new to the kitchen reported, “I’ve discovered that brownies don’t freeze all the way. At least not the ones I’m eating.” It pleases me that more people are discovering the joys of eating frozen baked goods. This summer, I’d urge you fire up the oven on occasion—and then send your baked goods on an icy retreat. When you’re eating a cold, fudgy slice of chocolate cake in the midst of a heat wave, without having lifted a finger, you’ll thank me.