Get a free recipe
Subscribe
In Belgium, the Fries Are Never Wimpy (Sorry, America)
By: James Ubaghs 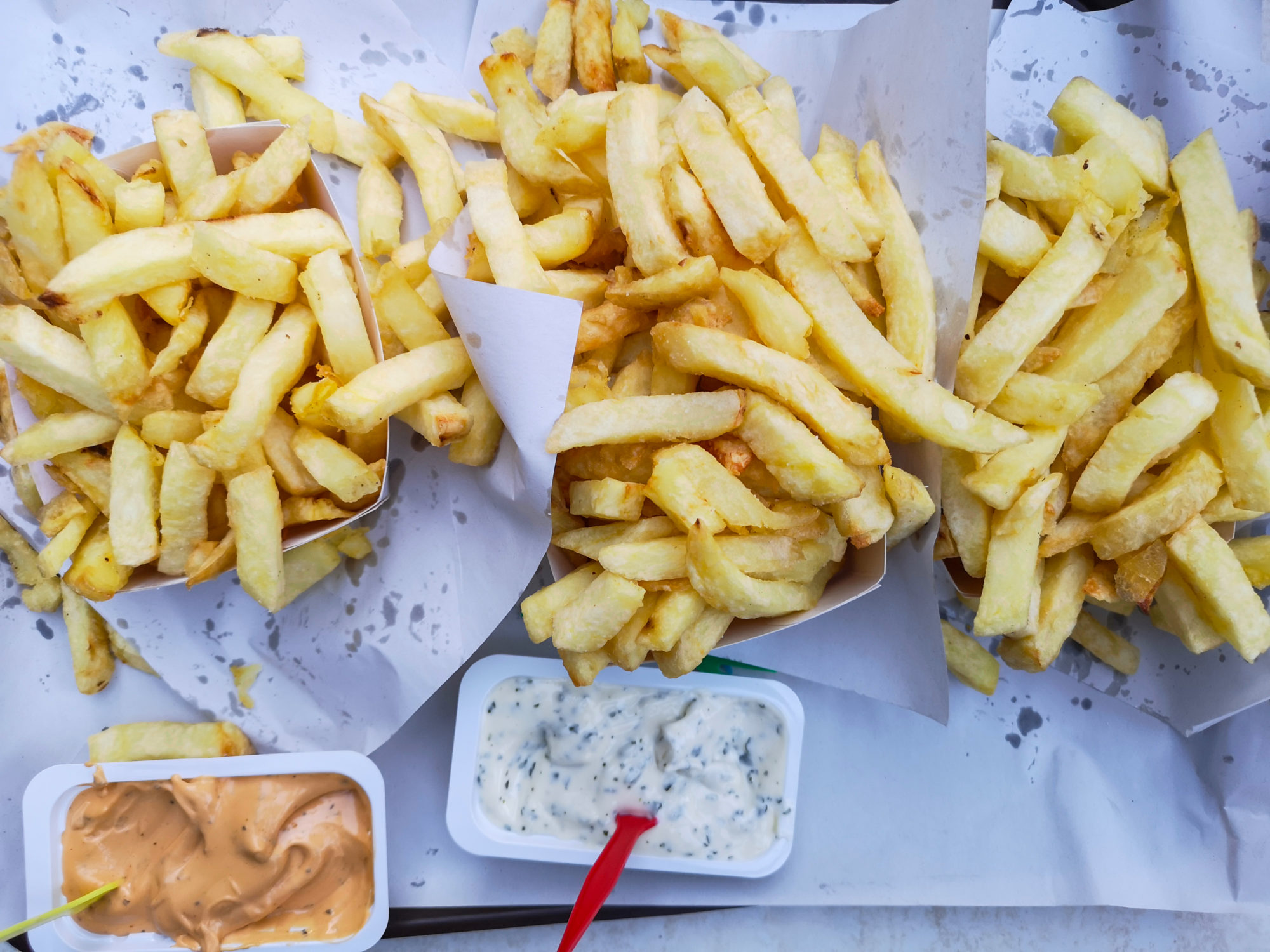 We may call them French fries in the U.S., but they were born in Belgium as a street food for the rich.

Belgium claims the fried potato as its own, and that’s very OK. The small, multilingual country on the border of France, Germany, and the Netherlands isn’t often prone to fits of nationalism, but the people take their fries very seriously.

Unlike their wimpy, vegetable-oil-fried American progeny, Belgian frites are always thick-cut, made with floury Bintje potatoes, and double-cooked in beef tallow. They’re first pre-fried at a lower heat and then briefly deep-fried at a much higher heat just before serving. It makes for perfectly crisp exteriors and tender centers, with the beef fat lending a savory aftertaste to every bite. They’re usually eaten on their own as a main dish and served with insane amounts of tart mayonnaise—considerably less sweet than American varieties.

If fries are Belgian, how did they come to be known as French fries across the pond? “Allegedly, during World War I, American soldiers serving on the western front ate fries in the French-speaking part of Belgium and assumed they were in France,” Peter Scholliers, a historian and food culture specialist at the University Libre of Brussels, explains. “They brought the dish back home with them, never realizing their error.”

That being said, fries (or frites) probably did originate in Paris, according to Scholliers, but they were popularized and perfected in Belgium. In the early 19th century, the country was an annexed province of its much wealthier neighbor France. Belgium produced and consumed far greater quantities of potatoes than France—a cheap source of calories at the time, popular in poor countries like Ireland and Poland. “This might be a reason fried potatoes spread more easily in Belgium in the 19th century, becoming an emblematic food in 20th-century Belgium,” Scholliers tells me. Fries gained popularity as a street food in the 19th century, but an expensive and decadent one, sold in busy city squares and in traveling fairgrounds throughout Belgium. Cooking fat was expensive, as was the fire needed to heat it (coal or wood in the first half of the century), so using all that to deep-fry a cheap staple like potatoes would have been reserved for the well-to-do. Scholliers says that fries at that time “were seen as a special treat, providing the feeling of a full stomach.’’ Even the aristocrats were treating themselves; an 1850 menu for King of Belgium Leopold I contained fries.

By the early 20th century, the price of fries had dropped drastically, while the purchasing power of the working classes had greatly increased. As Scholliers puts it: “Fries supplied a lot of calories at a reasonable price, available at a moment’s notice. It’s the original fast food.” Fries became a dietary staple in the country and a cultural fixture in everyday Belgian life.

Today, Belgians eat a lot of fries. They eat them in brasseries, served with hearty beer-braised beef; with their mayonnaise-heavy spin on steak tartare; and with mussels accompanied by a cold beer. They eat them at home. Deep fryers are commonly found on your average Belgian kitchen counter. And they eat them in the street, served in a big paper cone and smothered in mayonnaise or other mayo-based sauces. This is the Belgian frite experience at its purest.

Fry stands, or fritkot as they’re known in the Dutch-speaking parts of Belgium, are dotted around the country. These grease-encrusted shacks are located in busy public squares in nearly every town and city, on the sides of major roads, and in the center of small rural villages. A lingering aroma of warm animal fat is noticeable when you’re near one—an effective lure for the hungry and/or tipsy.

The established fritkot are perpetually busy, with fries being sold and consumed at all hours. At the front of the line you need to decide on a large or small serving. A small cone is already enormous, so you might as well get a large since the price difference is negligible. Then choose from an intimidating laundry list of condiments. Mayonnaise is a classic pick, but there are other interesting options, such as andalouse sauce, a mix of spicy pepper paste and mayonnaise.

Then decide if you want your condiment slathered directly in huge dollops on your fries as is traditional, or served in a more manageable side container. There’s a thrill to wrestling with a cone of fries overflowing with mayonnaise, even if an absolute mess is the inevitable outcome, so that’s the way to do it, in this writer’s opinion.

Eating good Belgian frites in the street is a celebratory treat for any time of the year, and at any hour. It doesn’t matter whether they’re originally French, or that America was the one to popularize the dish worldwide. What matters is that Belgians long ago perfected the art of deep-frying potatoes, never lost it, and never stopped eating them. So pass the mayo, please.

The basic recipe for Belgian fries is always the same. They’re double-fried in animal fat: pre-fried at a lower temperature, allowed to cool, and then quickly fried at a higher heat just before serving. Exact timings vary, but here are my Belgian father’s instructions on how to do it, shared in a recent phone conversation.

Beef tallow gives a lot of flavor and character and can be ordered online. Vegetarians can substitute vegetable oil, but it’s really worth tracking down some beef tallow. It adds a lot of flavor.