Get a free recipe
Subscribe
Why Bangladeshi Immigrants Are Cooking With Massage Oil
By: Naomi Tomky Photos: Kyle Johnson 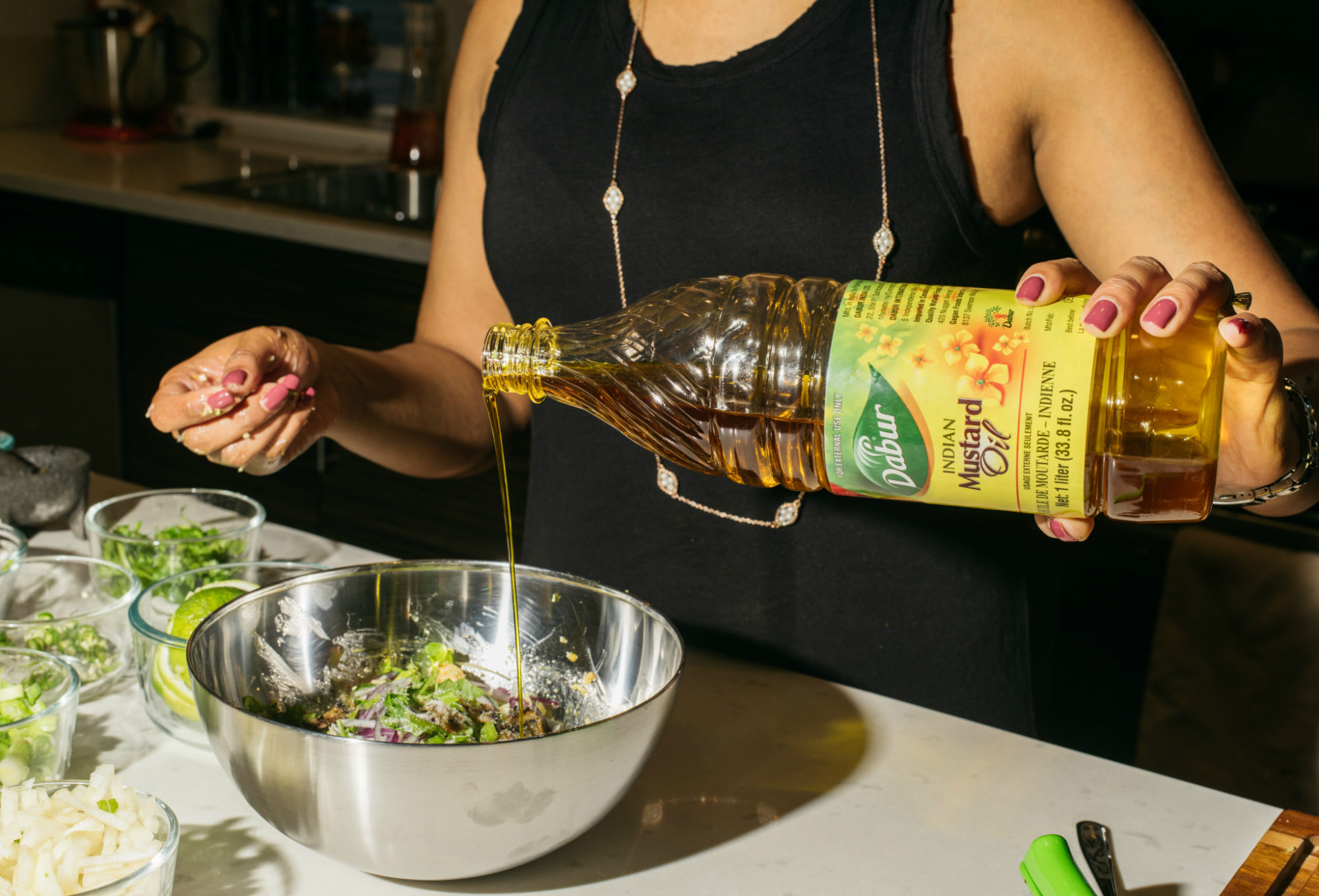 Many immigrants see mustard oil as a crucial ingredient for replicating the flavors of home. The FDA sees it a little differently.

Sarah Ahmad stands over the stove in her Seattle kitchen, heating up some mustard oil. The smell is sharp, like the sinus-clearing snap of wasabi married with the viscous warmth of clarified butter. “I wait for it to turn white,” Ahmad says of the heating oil, which starts out naturally yellow with a slight green tinge. When it does, it’s ready for chopped onion and spices; she adds turmeric, cardamom, ginger, garlic paste, Kashmiri chile powder, and cumin to the pan.

There are no Bangladeshi restaurants in Seattle, so when Ahmad moved to the U.S. seven years ago at the age of 24, she started cooking for herself. Because mustard oil—a fatty oil made from pressing the seeds of the mustard plant—is a defining element of Bangladeshi cuisine, Ahmad brought it over in her suitcase until she figured out where to buy it. Despite regularly using the oil in her home, she never noticed that the bottles she bought in the U.S. bore the shocking warning “For External Use Only.” Sarah Ahmad in her home kitchen

In Bangladesh, life revolves around food. “The kitchen is where conversations happen,” Ahmad says. Although she didn’t cook much when she lived there, let alone formally learn how to do so, she has spent her time in the U.S. re-creating the flavors of her homeland. As she talks, Ahmad rubs some beef with a packet of Bangladeshi pickle spices. “Mustard oil is used to make a lot of pickles,” she explains, so using the same spices with the oil in the stew is a natural favor fit.

The Food and Drug Administration would not approve of this usage. According to its Import Alert #26-04, “expressed mustard oil is not permitted for use as a vegetable oil”; as far as the FDA is concerned, it’s a massage oil and should be restricted to external uses: in hair or on skin. Per the agency’s alert, “it may contain 20 to 40% erucic acid, which has been shown to cause nutritional deficiencies and cardiac lesions in test animals.” The FDA restricts erucic acid levels to no more than 2 percent.

However, the studies the FDA used date from the 1950s, and both the United Nations Joint Food and Agriculture Organization and the World Health Organization now aprove levels of erucic acid levels of at least 5 percent. According to Food Standards Australia New Zealand (FSANZ), Australia’s equivalent of the FDA, the earlier studies failed to consider that humans and rats digest the acid differently; those rat studies, FSANZ concluded, are not relevant to its safety in people.

The FDA’s alert does acknowledge, in an odd and passive way, the reality of mustard oil’s use: “Expressed mustard oil is reportedly used by some cultures as a cooking oil.” “Some cultures” includes the approximately 300,000 Bangladeshis living in the U.S., per the 2014 census. That’s 300,000 Americans cooking and eating tomato khatta, pickle-spice-rubbed slow-cooked beef, and potato-and-egg bhorta, a zesty mashed potato dish (and the polar opposite of the bland American version). At her stove, Ahmad tosses the beef into the pot and leaves it to simmer, then turns her attention to a second pan, where she is charring tomatoes with a splash of water. The water helps her to peel the tomatoes, which she then smooshes with sliced red onion, letting the heat of the tomatoes soften them. She transfers the mixture to a bowl, where she combines it with chile peppers, garlic, salt, and mustard oil. “Tomato khatta,” she explains, “is almost our version of salsa.” It’s a recipe she learned from her mother-in-law; it can be served hot, cold, or at room temperature. She tops it with cilantro and adds a squeeze of lime. “Lime is the secret; I often hold it back when I’m teaching,” she adds, conspiratorially.

But it’s puzzling for many Bangladeshi-Americans that the everyday oil of their upbringing is “for external use only.” It was years after moving to New York that Noor Shams, an international development worker, food blogger, and host of a Bangladeshi supper club, realized the oil she cooked with bears that message in the States—and only then because someone pointed it out to her on Instagram. The label on her mustard oil—sold under the brand name Dabur, and also Radhuni—otherwise appeared completely identical to the version she bought back home in Bangladesh, right down to its color and logo. In the store, it sat on the shelf with the other cooking oils.

When Shams cooks for strangers, as part of her ongoing supper club, she begins by defining Bangladeshi food, which is similar to the food of West Bengal, the Indian state just over the border, but not anything like what most Americans consider Indian food. “It’s a lot of curries of fish and local vegetables, and we have our own Bangladeshi take on biryani,” she says. “It’s slightly spicier, with heavier use of green chiles. There are lots of coconut-based fish dishes.” But most of all, there’s mustard. Ground mustard commonly shows up in fish dishes, and while other parts of the subcontinent use mustard oil, it’s a pantry staple for Bangladeshis. “Now,” she says of her supper club customers, “I’m cautious about telling them where to buy [mustard oil] because it has that label,” Shams says of the bottle’s warning. “It bothers me.” It also bothers a lot of Bangladeshi cooks in the U.S. “There isn’t anything you could substitute,” says Afsari Jahan, a Bangladeshi cooking instructor at New York’s League of Kitchens. Bangladeshi cooking, she explains, is marked by its use of onion, ginger, and, especially when it comes to bhortas (mashed dishes), mustard oil. “If you want to cook Bangladeshi food, to learn the authentic way,” then nothing else will do, she says. Thankfully, South Asian markets around the country shelve mustard oil with cooking oils, and it’s sold on Amazon.

While all of these cooks acknowledge that mustard oil is occasionally used for beauty or massage purposes, it runs more along the lines of avocado face masks—a rarely used application—than an everyday lotion. Restaurants in the United States continue to serve foods with mustard oil, aware that technically this could earn them a health department citation (though nobody seems to have heard of this ever happening). And so mustard oil’s FDA designation remains a quirk of Bangladeshi-American life, more bureaucratic oddity than safety guideline.

But given the easy access to the oil and lack of consequences for its use, there seems little incentive for change. According to Peter Cassell, a press officer at the FDA’s Office of External Affairs, it would take hard scientific evidence of mustard oil’s safety to make a difference. “To obtain authorization for the use of expressed mustard oil in food [above the current limits],” he says, “a party would need to submit information to the FDA demonstrating that this use is safe.”

Back in her kitchen, far from the language of bureaucracy, Ahmad starts making a shrimp bhorta, sautéing the shrimp in mustard oil and mashing it together with ginger, green chile, chopped onion, lime, and salt. “Good shrimp bhorta tastes like lime, has a whiff of ginger, and the crunch of onion,” she says. She adds even more mustard oil at the end, she explains, “so we can smell it.” The oil pierces the air as it anoints the warm shellfish.

“Bhortas are made with love and hands,” Ahmad says. And regardless of the FDA’s feelings about it, with mustard oil.

“When people are sick, all you need is this, dal, and rice,” says Sarah Ahmad of this Bangladeshi version of mashed potatoes, proving that comfort food is universal. But while mashed potatoes stand in as a synonym for blandness in much of America, the Bangladeshi version is a peppy picker-upper, with its zing of mustard oil. The dish itself can be customized based on personal tastes—with or without the egg, fresh chiles in place of dried, more or less garlic, served room temperature or warm—but the key element is the final application of mustard oil, fresh and raw, unadulterated by heat. While I was testing the recipe, Sri Lankan food writer Vidya Balachander tweeted that her comfort food was potato peels stir-fried in mustard oil—two things you’ll have on hand at when cooking this dish, and an excellent kitchen snack.