From Tex-Mex to El Paso style to Laredo choriqueso, queso—the subject of a new cookbook—is not simply brick cheese and salsa.

For the uninitiated, queso, or chile con queso, as it’s more formally known, is an addictive and harmonious blend of chile peppers and melted cheese that is ubiquitous in the American Southwest. Typically offered as a hot and creamy dip alongside a basket of salty tortilla chips, this spicy and smooth dish becomes the focal point as people gather around the bowl, dunking their chips into the molten goodness. It is a happy food for all seasons and occasions, and it’s the odd get-together that doesn’t have at least one bowl for people to share. Queso is always a welcome guest.

As a native Texan, I grew up eating chile con queso, but I will confess that I didn’t think too much about it until I moved to New York City at the age of 25 for work. It was then that I learned that outside the Southwest it was difficult to procure the building blocks—brick processed cheese and canned diced tomatoes and green chiles, usually sold under the brand names Velveeta and Ro-Tel—needed to prepare classic queso, so I had to improvise with what was available.

As I looked up ways to make it without canned tomatoes and brick cheese, I discovered there was a whole world of chile con queso beyond what I’d known. Curious about its history and its regional variations, I drove across Texas and its neighboring states, eating queso, reading old cookbooks at university libraries, and talking to chefs and home cooks about the dish. From its beginnings in Mexico as a thick blend of green chiles and melted white cheese to its evolution into a velvety dip best made with processed cheese for its effortless melting abilities, I learned there are five distinct variations of chile con queso, which can be defined by the types of cheeses, chiles, color, and texture found in each style. Here is your tour, which is expanded upon much more in my new book QUESO!. Tex-Mex Queso
Usually when people refer to queso, they are talking about Tex-Mex queso, a molten dip made with processed cheese. Of course there are chiles involved, such as green New Mexican chiles, poblano chiles, and jalapeños, either roasted, pickled, or canned. But it’s the smooth, velvety cheese that provides the foundation of what some affectionately call liquid gold. And while Texans have been known to spoon it into tortillas and pour it over foods like steak, Tex-Mex queso’s main purpose is to be scooped onto salty chips.

Most cook Tex-Mex queso at home with a block of processed cheese and a can of spicy tomatoes and green chiles. Even some restaurants stick to this basic formula. This is a good dish and hits all the right notes, but there’s tons of room for improvisation, which you see throughout the state. For instance, you can liven it up with guacamole and a spoonful of pico de gallo. Proteins such as taco meat, bean dip, or shredded brisket can be stirred into the bowl. And while there is always a base of processed cheese, sometimes it may be white instead of the more familiar yellow, and other cheeses, such as Monterey Jack, may be added to the mix as well. Cheeses: Primarily processed cheese, either brick processed cheese, such as Velveeta, or American, though occasionally Monterey Jack or cheddar may be added. Chiles: Long green chiles, poblano chiles, jalapeños. Color: Typically yellow, though sometimes white. Texture: Creamy and smooth. El Paso Queso
In the far west corner of Texas sits El Paso, a border city on the Rio Grande isolated from the rest of the state by a vast rocky desert. But it’s not alone, as El Paso is part of a thriving metropolitan area along the river that also includes the northern Mexican city of Juarez and southern New Mexico. As such, the food in El Paso is heavily influenced by its neighbors with white melting cheeses, such as Muenster and asadero, and the locally grown green chiles (Hatch, New Mexico, an area famous for its peppers, is 82 miles away), hallmarks of the cuisine.

The chile con queso served in El Paso follows this pattern and is more Mexican than Texan, with this thick blend of white cheese, strips of roasted green chiles, tomatoes, and aromatics straddling the line between a thick sauce and a gratin. As such, it calls more for tortillas than chips, though people eat it with both. It’s enjoyed both as an appetizer and as a side dish, though it’s often seen smothered on top of eggs, steaks, and fries, too. Cheeses: Asadero, Muenster, Monterey Jack, white cheddar. Chiles: Long green chiles, poblano chiles. Color: White. Texture: Thick and a bit soupy. Laredo Choriqueso
Along the border, queso fundido, which translates to “melted cheese,” is a popular dish of broiled white cheese topped with roasted chiles, mushrooms, or meat. There are a variety of interpretations, but in the South Texas town of Laredo, a blend of hot and stringy white cheese studded with tangy chorizo sausage reigns supreme.

Choriqueso, as it’s more commonly known, is so woven into the food culture in this part of Texas that it can be difficult to find the yellow melted-cheese dip that also answers to the the name of queso. This is a hearty dish, meant to be eaten with tortillas, and it can be enjoyed at all hours of the day. You could cook it with store-bought chorizo, but it’s not difficult to make your own spicy batch, as many in Laredo do. Cheeses: Monterey Jack, mozzarella. Chiles: Ancho, guajillo (found in the chorizo). Color: White. Texture: Heavy and stringy. Quirky Queso
Recently in Texas, chefs and adventurous home cooks have begun experimenting with queso and taking it to new places, creating what I like to call quirky queso. For instance, there’s a Mediterranean market in Houston that serves a roux-based queso made with Greek cheeses and spices that is served with pita chips for dipping. For those who don’t eat milk, there are vegan quesos made with nuts and nondairy cheese.

In Austin, an Indian bar and restaurant offers a big bowl of melted American cheese garnished with a spicy dollop of jalapeño and cilantro chutney. And friends from East Texas enjoy throwing boudin sausage and crawfish into their quesos, too. While these takes on queso skew toward the untraditional, they are still inviting and fun and show queso is a malleable dish open and accepting to interpretation. Cheese: Any soft or semisoft cheese that can be melted or spread. Chiles: All species, either fresh or dried. Color: White and yellow. Texture: All over the map. Arkansas Cheese Dip
A few years ago, a man from Little Rock posited that chile con queso, or cheese dip as it’s known in Arkansas, was native to that state. This, of course, raised the hackles of many a Texan, and yet this myth persisted. Fortunately, I have found plenty of evidence to the contrary, but I was still curious about cheese dip, so I went there to see about the fuss. In my research, I had learned that early chile con queso recipes in Texas were made with yellow processed cheese, with chile powder and paprika providing the heat instead of roasted green chiles. This is because before the rise of canned green chiles, fresh ones were difficult to find out of season, but powdered red chiles were ubiquitous.

While this early style is no longer common in Texas, in Arkansas many cheese dips are still made this way. Some argue that Arkansas cheese dip is not chile con queso, but I believe that despite the difference in name, as its formation is like early chile con queso recipes, it’s instead just a throwback. My theory is that Texas restaurateurs in the 1930s (one in particular, W. “Blackie” Donnelly, is credited with its introduction to the state) brought this early style of chile con queso to Arkansas and simply never changed. Cheese: Processed. Chiles: Chile powder, paprika, jalapeños. Color: Typically yellow, though sometimes white. Texture: Smooth and creamy.

Lisa Fain, a seventh-generation Texan, cooks up all types of chile-cheese dips, both conventional and quirky, in Queso!

Texas has a strong Asian Indian community, and since Tex-Mex and Indian cuisines both embrace chiles, cilantro, and spices such as cumin, dishes that unite the two are becoming more common. One example of this fusion is Indian-style queso. The version I’ve included here is similar to one served at Austin’s Whip In, a lively Indian restaurant and bar. Its foundation is traditional, as it’s made with melted brick processed cheese. What makes this queso truly stand apart from others is the chutney topping made with jalapeños, cilantro, coconut, and ginger. This dip is both familiar and fresh, and a fine example of how Texan queso culture is evolving. 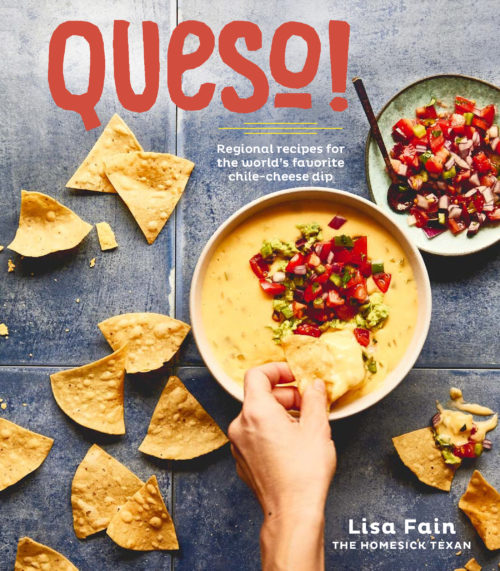 Lisa Fain is the James Beard Award-winning writer and photographer behind the food blog Homesick Texan. She is also the author of The Homesick Texan Cookbook, The Homesick Texan’s Family Table, and Queso: Regional Recipes for the World’s Favorite Chile-Cheese Dip. Her work has been featured in The New York Times, Parade, Southern Living, and Texas Monthly, among others. A seventh-generation Texan, Lisa currently lives in New York City.