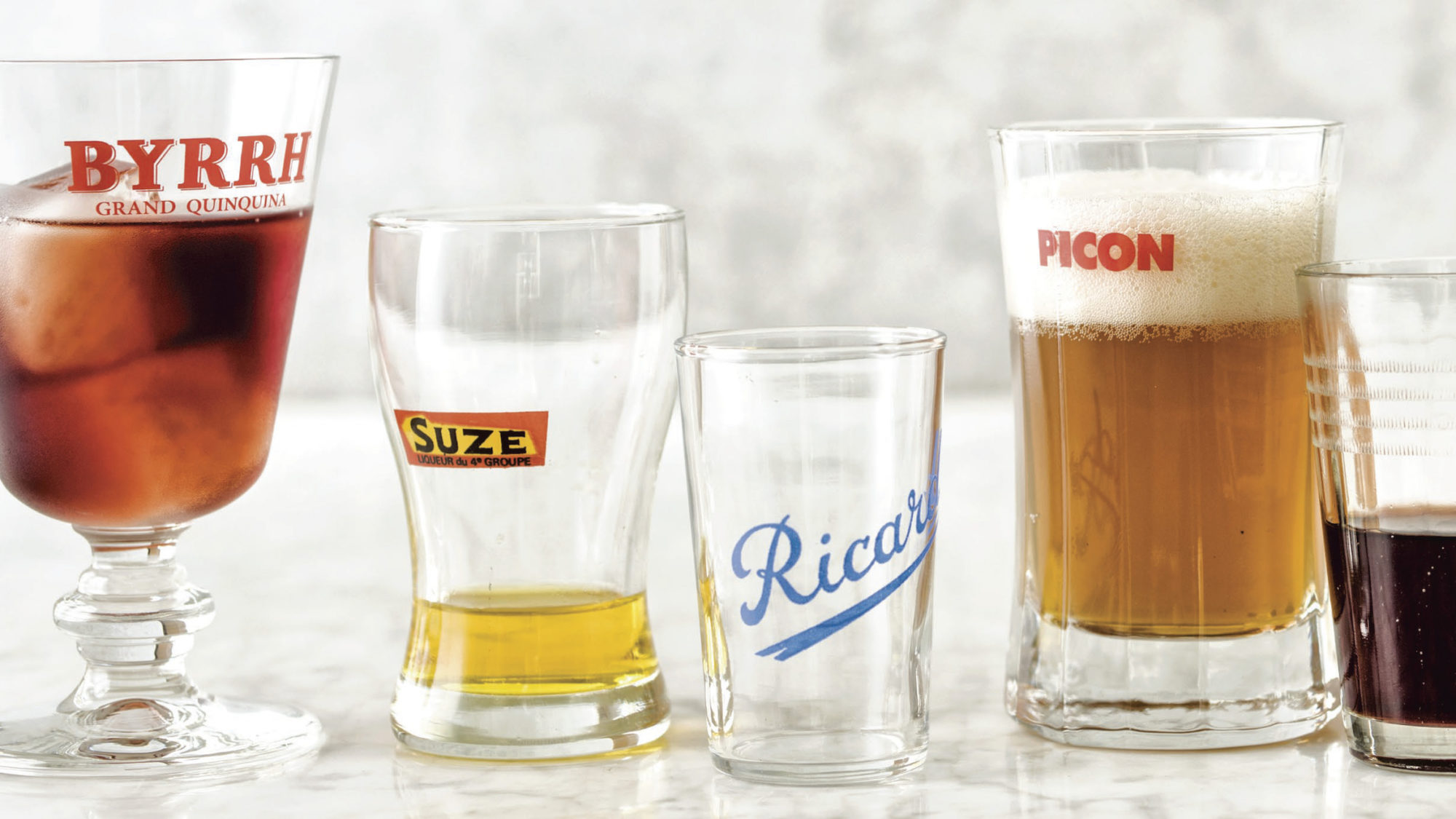 We sat down to talk to the author about his newest book, Drinking French.

David Lebovitz may be the high priest of ice cream, and one of the foremost experts on baking with chocolate, but he also happens to be one of our favorite chroniclers of life in Paris. He’s written about everything from the city’s jaw-dropping pastry scene to the hilariously bureaucratic experience of buying an apartment as an expat. But in his new book, Drinking French, he introduces us to France’s vast and idiosyncratic drinking culture, from the caffeinated confections you might encounter in a corner café to the apéritifs that you might sip, along with a salty snack, before dinner.

We checked in with Lebovitz to find out what he’s been cooking and drinking while stuck at home in Paris, and what the scene is like at French grocery stores right now (quite sane). Thankfully, as someone who writes about baking professionally, he always keeps a robust backup supply of flour on hand.

How are you doing these last few weeks, and what have you been cooking?
Gosh, a better question might be, what haven’t I been cooking? I’ve run the gamut from kitchen sink chocolate chip cookies using any and all types of odds and ends that were lurking in my kitchen, to melting down a rainbow of flavored compound butters (including paprika, radish leaf, and browned butter) that I dug out from la Sibérie of my freezer, where things generally go to die, to make the best cornbread I’ve ever had in my life (which, of course, I can never repeat).

I also scored a #10 (five-pound) can of San Marzano tomatoes from a professional kitchen that was selling off some of their stock, which I made lasagna from, and pasta Bolognese (twice!), and I may use the rest for spaghetti and meatballs, since we all seem to be craving nostalgic foods from our past. (I would kill for a Drake’s Yodel, but I have not seen those in Paris.) Speaking of chocolate, and my past, I did make Katharine Hepburn’s brownies, whose family lived just down the street from me when I was growing up. Her ultra-chocolate brownies are my Proustian madeleines.

New York grocery stores right now seem to be running out of toilet paper, flour, and pasta. What’s running out at grocery stores in Paris, and how are you working around the shortages?
Even though the Paris Marathon was canceled, people are carb-loading here, I guess, as the rice and pasta aisles at the grocery stores are definitely the only ones decimated in the supermarchés. Flour and yeast are the two other things that people seem to be loading up on, which is odd because Parisians aren’t really into home baking. With several great bakeries within a block of one’s apartment, and the cramped kitchens in some Paris apartments (it’s not unusual to have a toaster oven–size oven and a refrigerator similar to one you had in your college dorm room, if you live in a Paris apartment), it’s easy to understand why people would rather go pick up a tart or gâteau at the corner pâtisserie.

As a cookbook author, fortunately, I always have at least four to five kilos of flour on hand at all times, as well as several bags of sugar, a few dozen eggs, and blocks of butter stocked in the refrigerator, and more in the freezer. Someone saw my stashes on an Instagram story I posted and scolded me for hoarding. I didn’t reply, but as a recipe tester, those are all normal amounts of those things that I keep on hand. In fact, I actually have less on hand than I usually do.

Leading up to your latest book, Drinking French, you’ve written about baking, sweets, chocolate, and ice cream. What are the last five things you’ve baked?
The aforementioned kitchen sink chocolate chip cookies and Kate’s brownies (can I call her that?), plus I churned up a batch of chocolate sorbet, which relies on only pantry ingredients and contains no dairy, as well as a black rum cake studded with lots of dried fruits. I had planned to share the cake recipe with readers, but once everyone went into lockdown, it seemed cruel to post a recipe that called for a couple of cups of mixed dried fruits that people likely couldn’t get.

I stopped baking for a bit while I spent a few days scavenging through my stash of goodies that (admittedly . . .) I felt like I’ve been hoarding, like the block of Turrón I bought in Spain that I was saving for a special occasion (which has arrived!) and the Kalouga chocolate bar from Bernachon in Lyon, filled with salted butter caramel. But to counter all of that, I made the Cranzac Cookies from my book, Ready for Dessert, which have very little butter and no eggs, and are low fat. Fortunately, the food police are taking a much-needed respite, so I’m on parole for riffing off Australia’s (or New Zealand’s?) Anzac biscuits, without getting any reprimands online.

Drinking French is all about French drinking culture. Is there a drink you’ve been revisiting a lot while stuck at home?
Since I’ve been doing my nightly Apéro Hour on Instagram Live, I’ve been taking a deep dive into the substantial collection of bottles I’ve been hoarding over the last two years. (Again, I’ll admit to hoarding. But it was strictly for professional purposes.) So I’ve been using my copious amounts of French liqueurs and spirits, namely French vermouth, Suze, herbaceous Chartreuse, cognac, and fruit-forward Calvados, to share my favorite cocktails online. But I would say the French Manhattan is getting the most action in my kitchen (slash bar)—shaking up cognac and sweet vermouth, tempered with a little orange liqueur. It’s a great cocktail and a little mellower than the original Manhattan.

Is there a spirit in particular that’s really having a moment in France—an unexpected hit that’s really taken off?
We went through the Mojito phase, and now that the café terraces are closed with the lockdown, the future of the ever-popular “Le Spritz” seems to be in limbo—who wants to drink a Spritz alone? The up-and-coming drink in France has been the gin and tonic, which is increasing in popularity at the same rate as gin distilleries opening up in the country. Now that it’s spring, if my recent apéro hours on Zoom with friends are any indication, the “gin to” (as it’s shortened, in France) is definitely having its moment, which I’m happy about, because it’s one of my favorite warm-weather drinks, too. Fortunately, I received two corona-care packages from friends who are distillers, so I’m ready for spring, and possibly summer, depending on how long our confinement lasts.

Why is this book perfect for these imperfect times?
One thing the confinement did was push many of us to use social media in more creative ways. I’d always shied away from doing online videos, since I don’t have the tech know-how to make them as sleek and polished as other people do. But I wanted to connect with people who I couldn’t meet in person on a book tour, so I decided to just wing it, and people seem to enjoy the unpolished nature of my daily Apéro Hour Instagram Lives. And I’m enjoying it, too; I didn’t realize how much I’d like being directly in touch with people, virtually, which having a new book out encouraged me to do.

Since the book is about drinks, including French apéritifs and cocktails, it was the perfect subject for live presentations, since every bottle and pour tells something about French history, culture, and traditions, and people in lockdown are doing a lot more drinking. In some places, like the San Francisco Bay Area, drinking is up 42 percent. (I do recommend drinking in moderation, and responsibly.) And in France, the standard heure d’apéro has been redubbed the Apéro Skype. So it does seem like it’s the right time for new and classic recipes for all sorts of French drinks, from icy-cold chocolate frappés to light and breezy Americanos.

This interview has been edited and condensed for clarity. To see some of these French cocktails in action, tune into the @tenspeedpress Instagram channel this Thursday, 4/16 at 4:00PM EST. Americano
Think of the ruby-red drink as a more refreshing, more bubbly version of the Negroni.

Tangerine Spritz
This sunny, citrusy drink gives the Aperol Spritz a run for its money.

Socca
The socca turns a bit of chickpea flour into a savory pancake that can be topped with just about anything—even a handful of lightly dressed greens.

Last week, we talked to Bryant Terry about his latest book, Vegetable Kingdom, and he has some ingenious ideas for very ordinary vegetables.

A cookbook for our time if ever there was one, Charlotte Druckman’s new Kitchen Remix takes trios of everyday ingredients and teaches you how to keep reinventing them.

If you have any ambition to become a pastry expert during your time stuck at home, check out Everyone Can Bake, the latest book from the Cronut-famous Dominique Ansel.

For a bit of atmospheric escapism to the Aleutian Islands in Alaska, check out The Salmon Sisters, a seafood-centric cookbook by fisherwomen Emma Teal Laukitis and Claire Neaton.

TASTE contributor (see here for her sharp take on fennel) and author Leela Punyaratabandhu has written about simple approaches to Thai food, and about the vibrant food culture of Bangkok, but her latest cookbook, Flavors of the Southeast Asian Grill, is all about smoking and grilling in the most exciting way.

Did anybody have the same idea we had—pan pizza for dinner? Bread whiz Peter Reinhart wrote the book on it, and Perfect Pan Pizza is, indeed, pretty perfect for these times.