Standing in line for four or five hours to eat Aaron Franklin’s perfect brisket and ribs at Austin’s Franklin Barbecue might seem like a punishing ordeal. But it’s just a fraction of the time it takes to prepare each brisket. Waiting to eat is also nothing compared to the 2 a.m. rib shifts that Franklin, who pounds multiple espressos each day, works about three or four times a month (more when someone calls in sick) when he’s not dealing with everything else at his restaurant, running his welding shop 45 minutes outside of town, occasionally traveling to food festivals, or allowing himself 10 days of vacation in July.

Yes, Franklin is a best-selling author with more than 250,000 copies of his Franklin Barbecue: A Meat-Smoking Manifesto (Ten Speed Press) in print, and a James Beard Award–winning chef whose pop-up dinners in Chicago and Los Angeles have quickly sold out. But, he says humbly, “I’m just the maintenance guy for the restaurant.”

He’s not joking. When he’s not trimming and rubbing ribs in the wee hours at Franklin Barbecue, he’s “the plumber, the electrician, the office guy, the guy working lunch, the busser, or the guy scrubbing vomit off the floor.” His restaurant, which routinely sees lines of 200-plus people, is a place where meat is smoked 24 hours a day. Adjustments are made on the fly because barbecue is about responding to variables.

See Aaron Franklin by the Numbers [click to enlarge]

His book is more about how to think about cooking meat (and understanding the effects of different smokers and wood and weather and the way you tend a fire and what animals eat and how old they are and…) rather than following a specific recipe. Franklin says he didn’t even start putting recipes into his book until a couple weeks before he had to turn everything in.

“There’s no right way to do BBQ,” says Franklin, whose restaurant sells out of meat every single day. “It’s more intuition and feel, and teaching people how to think for themselves.”

Barbecue, as Franklin’s book makes clear, involves science, love, trusting yourself, and trusting the meat you’re lucky enough to cook. But most of all, it involves time. 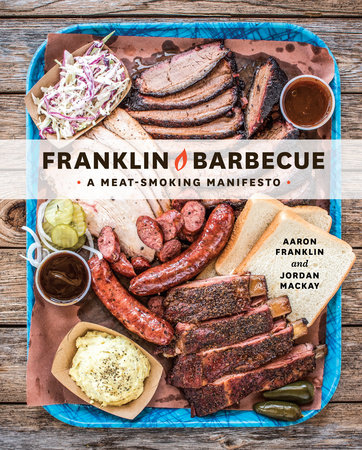