Get a free recipe
Subscribe
At the Rooh Afza Factory
By: Sharanya Deepak 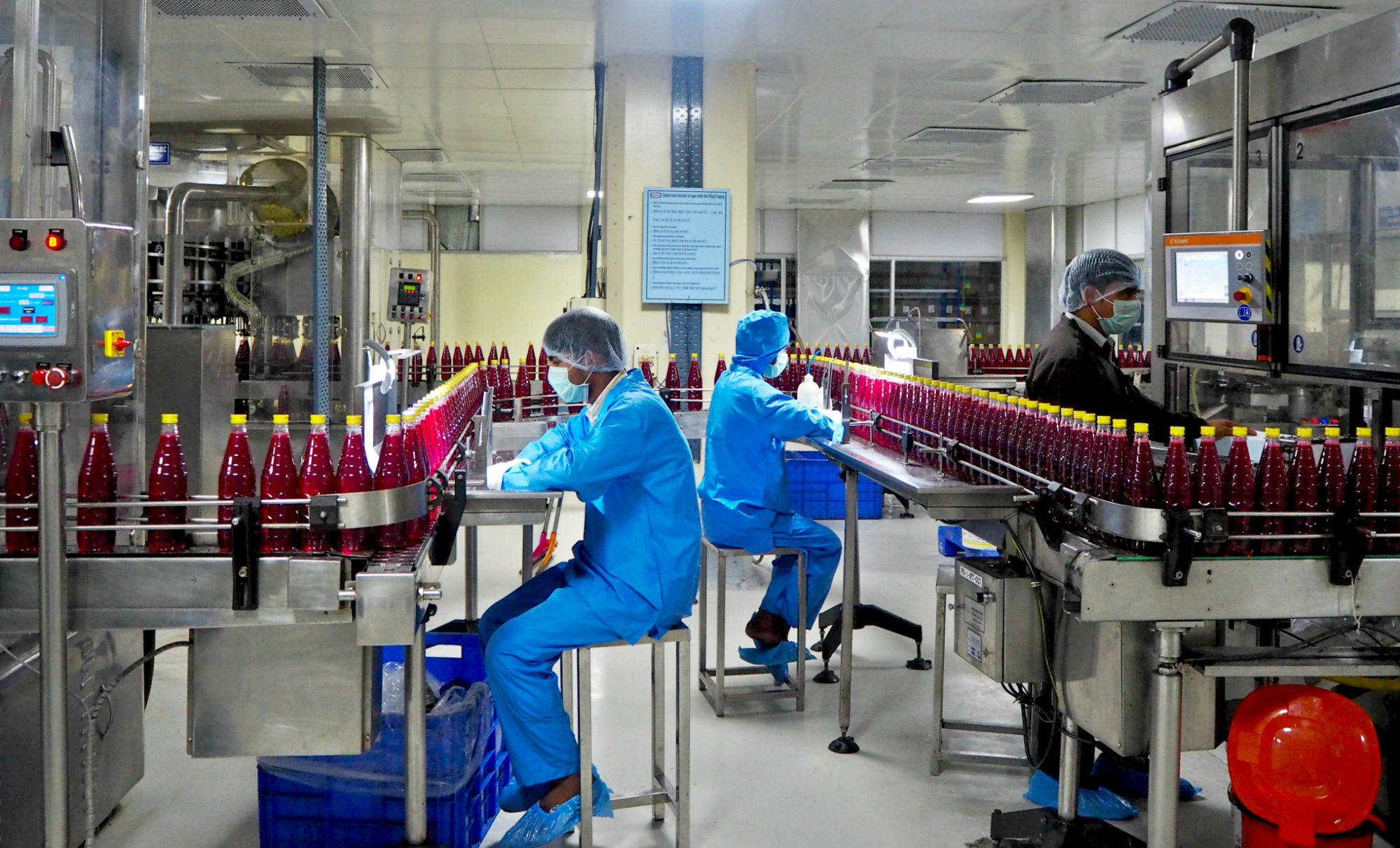 An Indian writer explores a refreshing sherbet beloved on the subcontinent, tracing it all the way to its source.

On a gray day in July 2017, my neighbor Shehzad arrived unannounced at my apartment in Brussels. Shehzad was a first-generation immigrant from Lahore, Pakistan, who lived down the street with his wife and two daughters. His brother, Ijaz, would often drop fruit off at my house, and I would bring them bread on Saturdays. From the first time we met, we were friends by default, united by common tastes in food and a shared language despite India and Pakistan’s hostile border.

Shehzad never came to the house by himself—it wasn’t polite in our cultures. But this day he was alone and had brought me a cold, one-liter tall bottle filled with a beverage the color of red roses. “It’s very gray outside; you must miss your family,” he said, as I nodded absently and a little confused. “Here, drink this. It’ll bring some color to your face,” he said, grinning.

“How did you know this was my favorite?” I exclaimed excitedly, as he began to leave. “I didn’t, but it’s mine as well,” he replied.

Inside the latch-top bottle was the red syrup of Rooh Afza, mixed with ice-cold water and infused with fresh mint. How did Shehzad know this reminded me of home? Had I told him that my sister and I would lie on the cold floors in New Delhi, drinking glass after glass of it? Inside my Belgian living room, I drank the bottle down in big gulps, which transported me to New Delhi and its vivid Technicolor. As I drank the contents in large, quick gulps, I came to realize that Pakistanis drank it, too. I called my sister to discuss, who said, amused: “Of course they do. They drink it with milk. They love it.”

Rooh Afza is a sherbet and a summer favorite in the Indian subcontinent. “Rooh” means soul in Arabic, and “Afza” means to refresh—making Rooh Afza, quite literally, a refreshment for the soul. Sherbet (pronounced “shar-bat” in Urdu) is a common beverage in South Asian and Middle Eastern cultures. Made from sugar, flowers, and other botanicals, a sherbet’s main purpose is to provide a form of relief. Sherbets were brought to the Indian subcontinent by Babur, the first king of the Mughal Sultanate, who planted sprawling gardens to grow herbs for sherbet. A sherbet is a sign of good hospitality, an aphrodisiac for tired travelers, and, as many still believe, a drink that connects its drinker to the divine.

Dark pink in hue, rose flavored, sweet, fragrant, and smooth in texture, Rooh Afza is a concentrate that is most commonly, as Shehzad had done, mixed into water to make a refreshing drink. People also have their own ways: Some drink it with black salt and mint; others like it swirled into a glass of milk. In Delhi, the drink is still consumed the way it was a hundred years ago—poured over ice and sprayed with lemon, or as a syrup used in ice creams and chuskis (shaved-ice cones on sticks).

Rooh Afza was created in 1906 by Hakim Abdul Hafeez Majeed, an Unani doctor who worked from a small laboratory in Old Delhi. On a scorching early autumn day, Majeed decided that something needed to be done to battle the city’s heat and distilled the sherbet as a cooling agent from 13 herbs. Within a year, Rooh Afza was popular in the city, and the sherbet became a common sight on the streets. This is the story Shailesh Tewari, the man in charge of Rooh Afza’s manufacturing in Delhi, tells to me on the day I visit the Hamdard factory. The Delhi branch is the company’s second in the city, located in Manesar, 50 kilometers from the center. In this facility, Hamdard manufactures more than 600 products, but one entire unit is dedicated to Rooh Afza alone.

Inside the factory, the romance that surrounds Rooh Afza is somewhat busted—there are no old men distilling herbs into bronze jugs, but large, rumbling stainless steel distillers that complete the entire process. To start with, an ark, or distillate, is made from more than 13 herbs, fruits, and vegetables. An ark is a traditional Unani cure in which a particular herb is used to heal a specific ailment in the body. Chicory, for example, is supposed to help with sleeplessness; Nilofer, or water lily, is a cure for infections in the blood. In Rooh Afza, in addition to these two, mint, coriander, munakka (dried grapes), and vetiver are some of the herbs that are distilled and mixed into the sherbet’s final ark.

“Majeed used herbs and flowers that were neglected in mainstream medicine,” says Tewari as he explains the choice of herbs. “He wanted to use things that other people deemed worthless.”

To make the sherbet, the ark is slowly passed through distillation pipes, after which it is mixed with orange and pineapple juice. This mixture is then added to inverted sugar syrup, a sweetening liquid made by heating refined sugar, which forms 87.8 percent of the sherbet’s final constituency. The ark makes up 4.5 percent, the juices are 3.6, and the remaining 4.1 percent is taken up by Rooh Afza’s coloring agent. I ask Tewari about the sugar and the coloring in the sherbet being detrimental to health, and he is indignant: “Sherbet is always sweet. Would you drink sour sherbet? And the color is indispensible. Without it, there is no Rooh Afza.”

Its mix of its many herb distillates gives Rooh Afza the quality of an all-around elixir, and its sweet, fruit flavors enable it to be a recreational drink. The factory has more than five massive manufacturing units and everything from distilling to capping and labeling the bottles is done by machines—at each step Hamdard employees, faces in masks, watchful of the sherbet shooting through pipes.

One batch of Rooh Afza takes four hours and makes 11,000 bottles. Ten batches, or 100,000 bottles, are produced a day, and in a month, more than 3 million are packaged to be shipped to 450,000 outlets around the country and others in the Middle East, Europe, and North America.

While Delhi’s factory is a sprawling 43,000 square feet, it is not the only one. Rooh Afza’s other major unit is in Karachi, built by Majeed’s second son, Mohammad Said, in 1948. After the country’s independence and partition in 1947, Said, along with millions of others, and half of Hamdard’s enterprise moved across the borders. With its first factory in Karachi, Rooh Afza spread itself across the divided subcontinent, becoming a household staple in India, Pakistan, and Bangladesh.

In all three countries, sherbets are most popular during the month of Ramadan, where they are drunk to break the fast, as initiation to an upcoming feast.

“Five minutes before iftar, I always made myself a cold glass,” says Raza Ibrahim, a friend from Karachi. “When you haven’t eaten or drank for a whole day, Rooh Afza is the cold sugar rush you need.”

Iftar, the meal eaten to break fast during Ramadan, is usually a lavish spread of meat stews and kebabs. Cold Rooh Afza is drunk first to satisfy a thirsty faster, and then with the meal to cut strong, spicy, stewy dishes. Rooh Afza pairs perfectly with haleem, an aromatic lentil and meat stew cooked with ginger and onions, or shammi kebabs—minced lamb kebabs made by marinating in yogurt and spices. In Kashmir, a state known for rich and regal cuisine, the sherbet is paired with gushtaba, lamb meatballs cooked in a yogurt gravy, and gaev tchot, thick, hot rotis made in scads of ghee. In all parts of the subcontinent, it isn’t common for meals to be accompanied with alcohol, so when it’s time for a celebratory meal like the iftar, sherbets are the way to go. “Every iftar I remember was centered around Rooh Afza,” says Sibtain Naqvi to me on the phone. Sibtain and I are distant relatives. Raised on either side of the India-Pakistan border, we have never met. “Pakodas, pakwaan, korma—everything was made from scratch in the kitchen. But there was always Rooh Afza, like a guest on the table.”

In India, the Coca-Cola Company made a sweeping presence with drinks like Minute Maid and ThumsUp in the 1990s, but in Pakistan, Sibtain explains, Rooh Afza had little competition.

While Rooh Afza is an important presence during Ramadan and Eid, and all other Islamic festivals, it is also drunk on Diwali, the Hindu festival of lights, with free meals in gurdwaras (Sikh temples), and in Delhi and in Karachi, as Raza tells me, anywhere a meal is in progress. Unlike foreign imported drinks, it is cheap at 135 rupees a bottle (around three dollars) or 20 rupees a glass (50 cents). Despite being associated with traditional Islamic medicine, Rooh Afza transcends socioeconomic and national borders. All its drinkers, regardless of caste, class, or religion, are, for a moment, agents of the same culture.

Today, Rooh Afza is a permanent fixture in the South-Asian imagination. It is enjoyed all over, from Delhi to Hyderabad, Karachi to Kabul, Dhaka to London. Its promise lies in its nostalgia, its timelessness, what Tewari called its “inimitability,” making it, as the bottle itself declares, “the summer drink of the East.”

“The first sip of Rooh Afza, it goes straight to the brain, to the memory,” says Sibtain. “It appeals to the subconscious, not just to the palate. That’s why it’s not going anywhere.”