Get a free recipe
Subscribe
At the Guacamole Competition
By: Rachel Khong 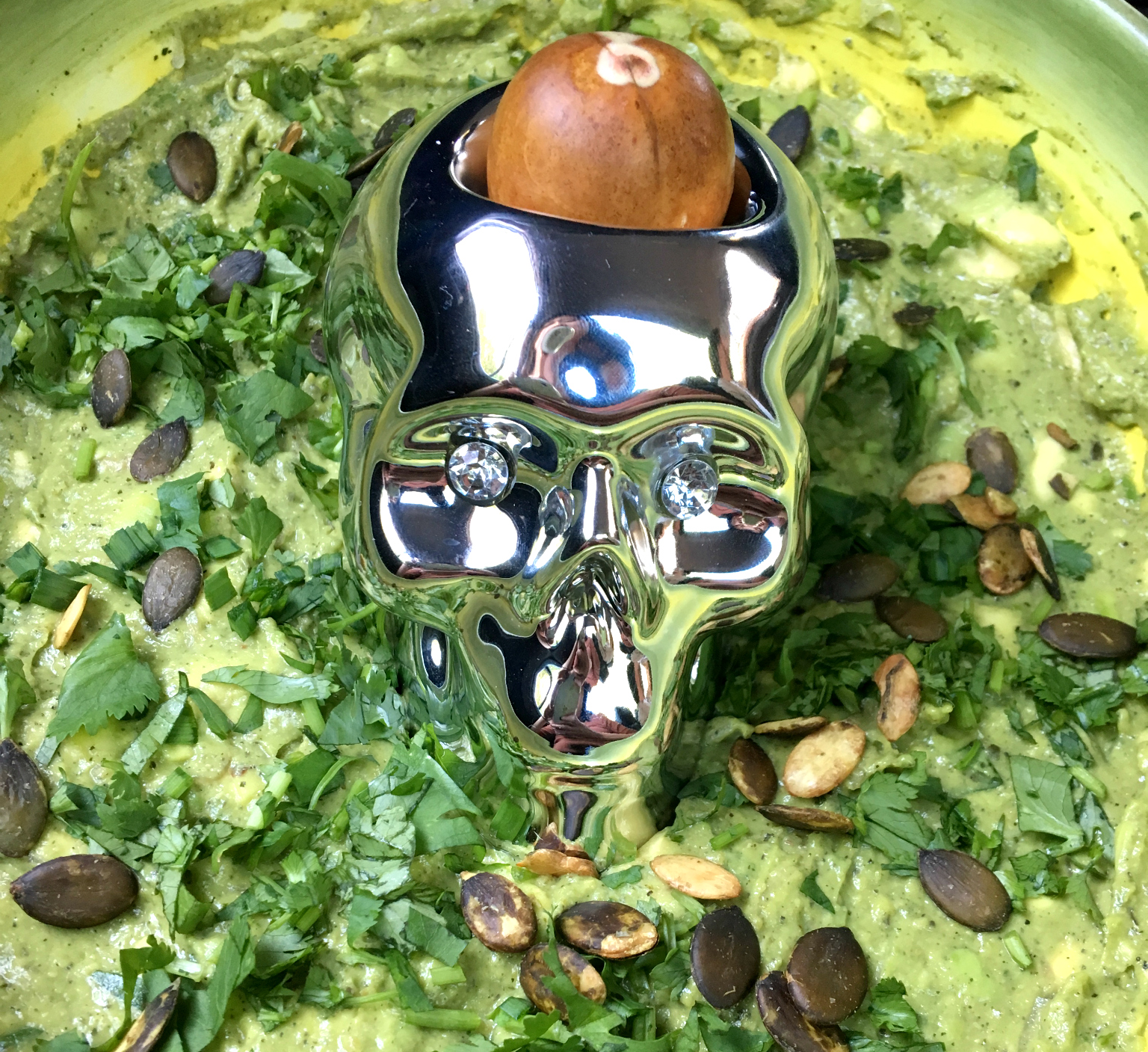 If you can smash avocados, and have a pun to spare, you too can compete in a guacamole contest.

On a recent warm San Francisco September day, I mashed 13 avocados in an avocado-shaped bowl and garnished the results with roasted pumpkin seeds, cilantro, and a shining silver skull. We then transported these results—guacamole packed into an avocado bowl—to a stranger’s home, where we Sharpie’d its name, The Guacing Dead, onto a “Hello my name is” sticker and placed it alongside other guacs. We were entrant #16 at the 6th Annual Indian Summer Guac Off.

We’d not been aware of the five prior annual guac-offs, but somehow we caught wind of this year’s. To my guacamole’s right and left there were great big bowls of guacamole, many bearing punny names that would make even a prolifically joking dad groan. Attendees circulated among the bowls, dipping chip after chip into guac after guac. A mariachi band played; the beer flowed. Big dogs ran around with small dogs; babies’ limbs dangled above the tables as their parents, to whom these babies were strapped, leaned to dip their chips. There were people from all guacs of life.

We were here for guacamole, in all its varied-but-mostly-green glory. Some guacs were smooth, some were chunky, and some were oddly—sometimes troublingly—fluffy, with the consistency of whipped egg white. There were guacamoles garnished with the conventional (peppers, cilantro, tomato) and the insane (pop rocks, worms—maguey, not gummy). There was a tongue-in-cheek deconstructed avocado toast—guacamole with crumbled-up toast in it—and everything bagel guacamole with smoked trout and the seasonings you’d find on an everything bagel. Even the vessels varied, from Tupperware to cowboy hat to carved-up watermelon to avocado skins themselves to my avocado bowl, of course. Some guacamoles came with instructions.

A guacamole called Margaritaville had a mysterious kick and came with a tiny serving of margarita—a drink pairing to go with your guacamole. Audra Smith, Margaritaville’s creator, stood by her guac to dole out the miniature margarita portions. “It has a little Asian flair,” Audra told me. She hesitated a moment, deciding whether or not to tell me more. “I can tell you the ingredients because everybody’s already made theirs,” she said finally. “It has ginger and Bragg’s, which is like soy sauce. Really the ginger is the secret ingredient.” At one table, Sarah Smart was decorating her husband Jal’s guacamole with edible flowers. “I’m just on flower duty,” she said. “This guacamole, it’s got wasabi and cucumber; it’s a take on sushi flavors.” It was paired with a slightly edited Lord Tennyson poem: “Avocado and evening star/ And one clear call for me!” I queried the maker of a salsa decorated with plantains and the flag of Costa Rica. “Our friend studied abroad in Costa Rica and left this salsa—I don’t know what it’s called,” said the creator, whose name was Isabel. “It makes the guac taste like barbecue chips.”

“You know what would be a funny name?” Eli, my husband, had said before we left home. “Guac Like an Egyptian. Though I don’t know what that would look like.” And sure enough, at the Sixth Annual Indian Summer Guac Off, there it was: “Guac Like an Egyptian” was a guacamole served with pita chips. You were instructed to dip the pita into the guac and finally a tray of dukkah. I spotted my pals Wes Rowe of Wes Burger and Valerie Luu of Rice Paper Scissors. Their guacs were part of a restaurant showcase. Wes’s guac had charred garlic in it, which added intrigue, and Rice Paper Scissors’ guac, which had fish sauce in it, had been appropriately molded into a fish.

With well over 50 guacs represented, there were guacs beyond my wildest dreams. Because of the sheer number, it was often the stranger guacs that stood out and lodged themselves in one’s memory. A guacamole with kimchi in it (“Kimchee muthaF guac”). Another guacamole with pop rocks in it, which was also the guac that came served in a watermelon, carved like a frog (“Pop, guac, and hop it”). A guac with chicharrons (“And piggy makes three guacamole”).

We came across the owner of the farmhouse—a man everyone was calling Dr. Rick. He was seated behind a table, where he and his son signed copies of their self-published book, P.P.’s Anti-Joke Book and a Brief History of Humor—the guac-off was doubling as their book release.

The guacamoles were beautiful in their diversity. But some were boring, and some were bland, an insult to the miracle (and pricey commodity—mine were $2.99 a pop!) that is the avocado. Granted, I may have had these ungenerous thoughts because I was there to win it all—namely the gigantic trophy that would crown me the guac queen.

This year, there were five categories. All-around best guacamole, best name, most creative, most extravagant, and best presentation. The voting was to be a pure democracy. Attendees would vote. There were no guacamole experts, no electoral college.

“For the next hour or so, your entire job is to eat guacamole and meet your neighbors,” one of the cofounders shouted through a megaphone, with great enthusiasm. Everyone cheered wildly.

When it came time to “register” to vote we registered by taking a shot of tequila. We voted on our phones, typing the numbers of our favorite guacamoles in each of the categories. Then we waited for the votes to be tallied. I remembered my last experience of voting in an election all too clearly—the sadness and the heartbreak. We gathered for the exciting results, and I braced myself for disappointment.

The best name went to “Tap That Hass.” Eli and I shook our heads, disapprovingly. Maybe if the guac had been served in a keg you had to actually tap! This was like losing “best team name” at trivia night. “Best presentation” went to the frog-shaped watermelon pop rocks guacamole, which, yes, we felt was rightly deserved. The most decadent was the chicharrons guacamole, whose makers won a decadent restaurant meal. And the all-around best guacamole? That went to entrant #4, a guacamole called “That Green Light I Want It,” which some Googling suggests was named after a line in a Lorde song, itself probably a tip to The Great Gatsby. I will refrain from saying what I truly thought about that guacamole, but I will recommend bringing a large group of your friends to vote for you in a guac-off.

We were about to slink away, prize-less and disillusioned, when suddenly, the cofounders announced that there would be an additional category! This category was “Best bowl.” We waited, breaths held.

“The avocado bowl with the skull in it,” they announced. They handed me one of my prizes: a shot of tequila. It was a consolation, but a prize nonetheless.

The beauty of making your own guacamole is that there’s plenty of taste testing along the way. You can adjust the tartness and seasonings however you’d like. Don’t forget the toy skull topping!