Get a free recipe
Subscribe
The Art of Sardine Collecting
By: Anna Hezel Illustration: Vance Lump 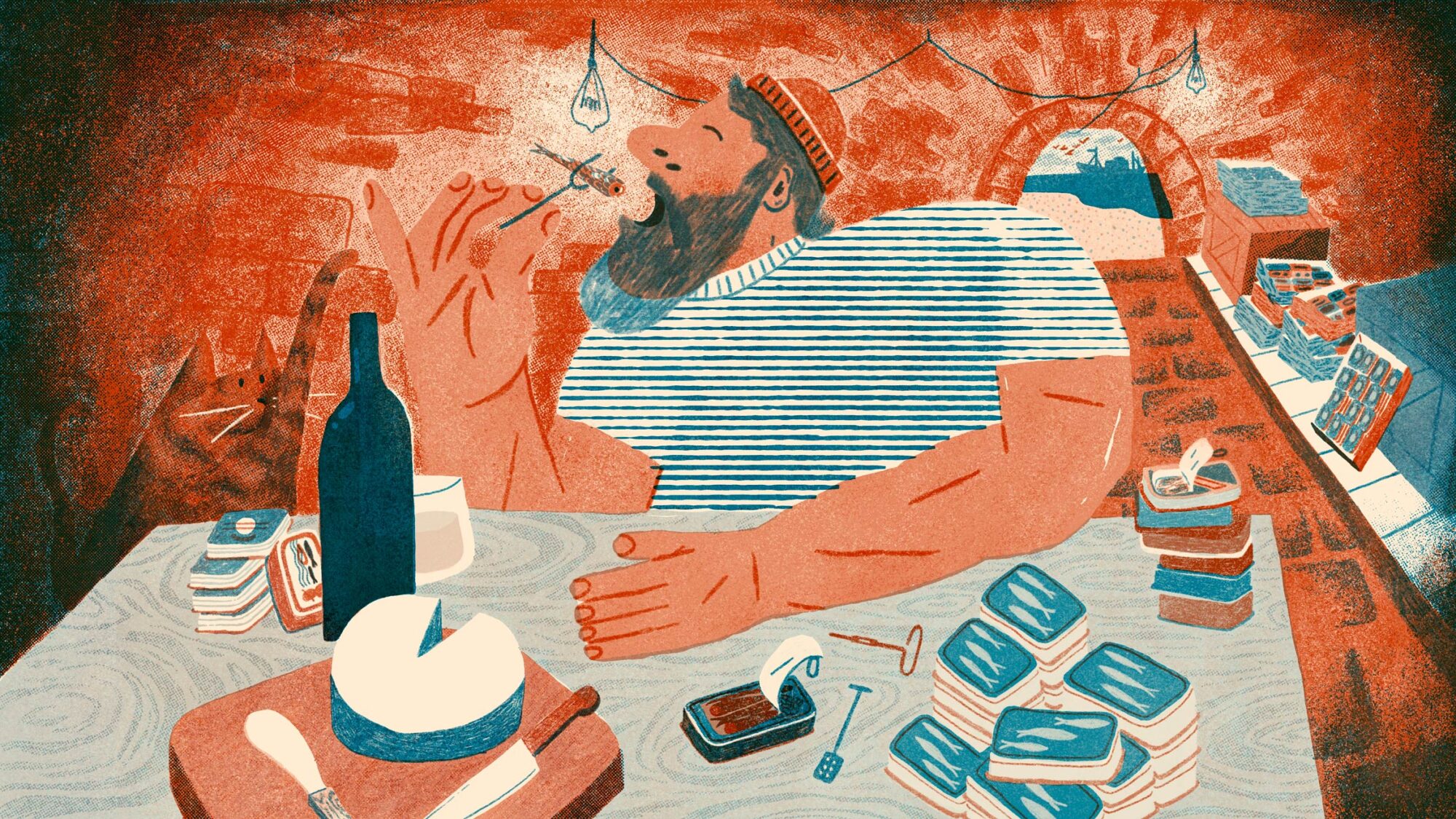 A look inside the often eccentric, sometimes survivalist, world of tinned-fish collecting.

Of all of the canned fish in the sea, sardines tend to get the short end of the stick. Without the mutable, normcore appeal of canned tuna or salmon, or the pungent mystique of anchovies, sardines are often relegated to a category of gristly survival sundry. They’re the oily protein of choice for touring musicians on a budget (hello, Mike Watt of the band Minutemen) or for pragmatic hikers—people who aren’t put off by the occasional crunch of a spine bone, a flash of silvery skin, or a flaky mouthful of perfectly intact tail. For anyone who’s already on the fence about the concept of canned fish, they’re the hardest of hard sells—like the black licorice of canned foods.

But it may be the fish’s polarizing nature that makes sardine fandom so zealous. Drew Mellon, the founder of the blog Mouth Full of Sardines, grew up in North Carolina, where cans of sardines are common supplies to pack for outdoor activities. After starting the blog in May 2010, as a way to keep track of which cans he had tried, he realized that there was a whole world out there of like-minded sardine enthusiasts. “Almost everyone has a sardine story to tell,” he says of the sardine community, one he describes as “one of the best communities out there.”

“You can literally eat sardines every day for several months and never have the same tin twice.”

The blog became a way to connect with (and even trade with) other collectors, while methodically logging the taste, texture, and appearance of every can Mellon opens—of which there are several each week. There were the Peixeira sardines submerged in spicy vegetable oil (“A subtle oil aroma upon opening. A lovely hue to the oil”), and the Pilchard Works fillets in tomato sauce (“I was informed after eating this tin that I smelled of fish…strongly”). The breadth of reviews, which number more than 200, is a testament to how many cultures in the world have sardine-canning traditions.

“You can literally eat sardines every day for several months and never have the same tin twice,” Mellon tells me. “I give sardines away all the time. I’ll leave sardines in little free libraries, donate sardines to food banks, or, if I’m out and about, and sardines pop up as a topic of discussion, I’ll hand out tins.” As a health care worker, Mellon has found himself stocking his work locker with even more tins of sardines than usual during these past few weeks.

For chef and author Lior Lev Sercarz, part of the appeal of collecting sardines is the wide variety of packaging. Sercarz’s collection of sardines is just a portion of a larger collection of about 1,500 vintage food tins and boxes. But part of the intrigue is also the ritual of aging the sardines—a practice that many compare to aging wine.

“If there’s a flavor or a marinade, you just gain more flavor that penetrates into the sardine, also tenderizing them even more,” says Sercarz, who originally picked up his habit from a former boss in France who was an avid collector. “Her advice was to, every few months flip them up and down, left and right, so that the oil coats the sardines properly. That was her ceremony. I don’t have the time for that, but that was her thing.” Sercarz’s collection is mostly capped at two to three years old currently.

Gui Alinat, a chef who grew up in the South of France and now lives in Florida, keeps his modest stash of the canned fish in his laundry room, and he rotates the cans whenever he thinks of it—usually once or twice a year. He finds that two or three years of aging give the fish a moister texture, but this end result isn’t the only reason he likes to age sardines.

“It’s getting better every day, little by little, and you’re waiting for the right occasion to open a can, like waiting to open a bottle.”

“The journey is almost better than the destination, if that makes sense,” he says, drawing a parallel to wine collecting. “You know it’s there; you’re kind of proud that it’s there; you’re improving something; you’re improving your quality of life, too. And it’s getting better every day, little by little, and you’re waiting for the right occasion to open a can, like waiting to open a bottle.”

For Alinat, the best way to enjoy a special tin is al fresco, if you can, with a loaf of sourdough bread to soak up the extra oil and cut through the richness with a touch of acidity. A few of his cans have come in handy these last few weeks, as most people in the United States have started to limit the frequency of their grocery shopping. This past week, he even convinced his seven-year-old daughter to try her first sardine (she ate the whole fish in one bite and loved it).

While sardines are generally safe to eat for years past their “best by” dates, as long as the can hasn’t been damaged, most collectors agree that the best ones to age for long periods of time are the ones packed in olive oil, with no acidic ingredients or other flavorings. And as Margaret Costa writes in the sardine chapter of her famous 1970 book, Four Seasons Cookery Book, “Like wines, if they are good in the first place, they are worth laying down.

Following this principle, several sardine producers, like Rödel and Connétable in France, actually print vintage dates on some of their most premium cans. Laurence Blanloeil, who handles public relations for Connétable, the oldest operating sardine cannery in the world, tells me that, as the fish ages, “The flesh becomes smoother and tender until the bones disappear totally.”

According to Blanloeil, almost every year has its vintage-worthy sardines. But in order to qualify for these cans, the fish, which come mostly from the coast off of Brittany, must be caught during the height of the season (between May and November) and must have a minimum of 10 percent fat content. Before hitting the market, each one of these cans is aged a minimum of 12 months.

The oldest sardines Mellon has tried (and blogged about, of course) were a tin of Yugoslavian sardines packed in oil from 1968. “They possessed a strong metallic taste and a strong metallic aftertaste. My tongue felt as if it had grown fur,” he tells me. His advice to budding collectors is simple: “Most tins from France are aged and are perfect for aging even longer. Just seek out French sardines.”