Get a free recipe
Subscribe
The Art of the Cooking Demo Disaster
By: Aaron Goldfarb 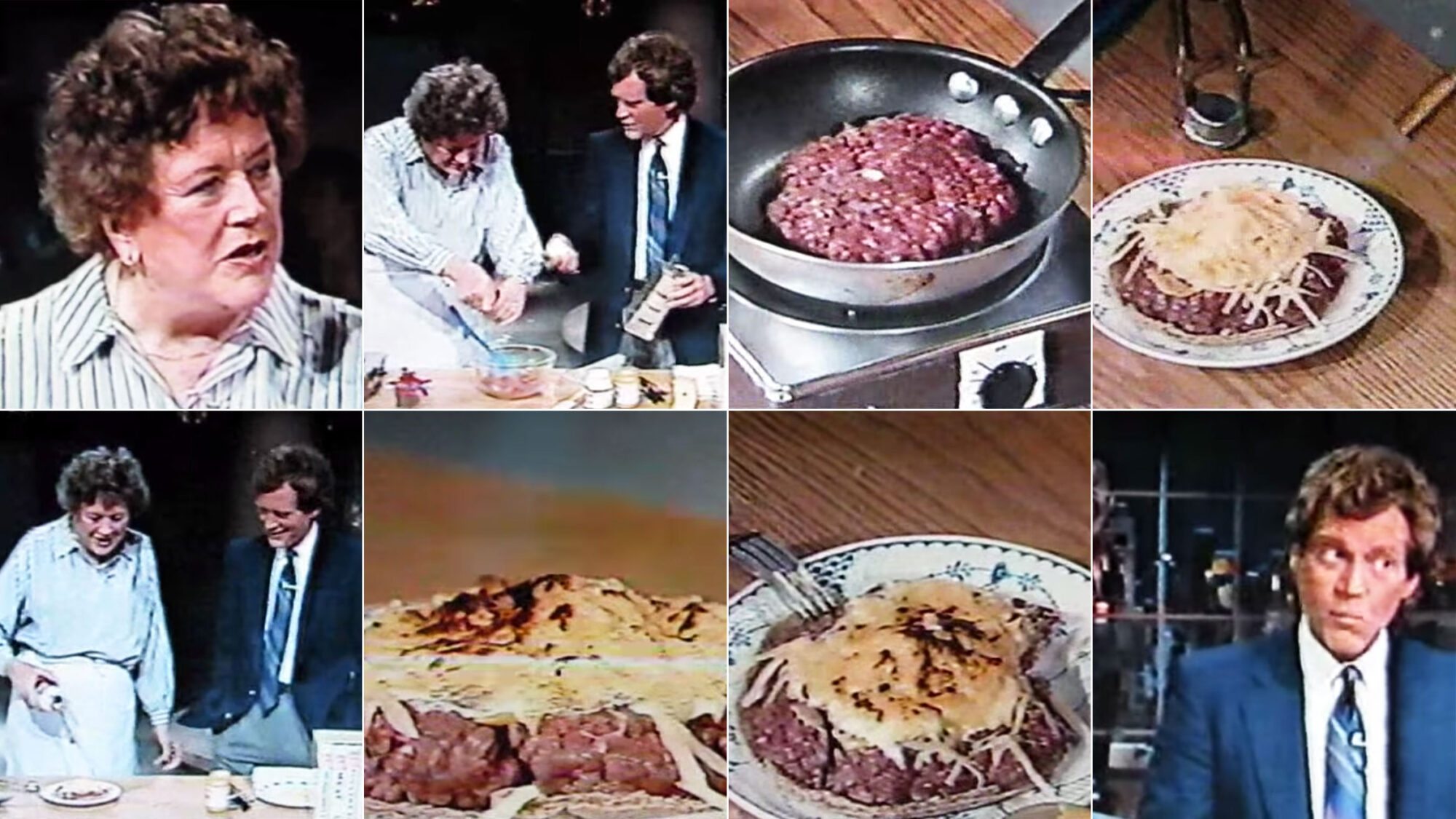 From Letterman and Julia to Leno and Emeril, late-night cooking segments have always been utter chaos.

Julia Child’s third ever Late Night With David Letterman appearance, on December 22, 1986, begins like any other television cooking demonstration. She arrives onstage, the playful host warmly greets her, and she announces she’s going to make some “very fine” hamburgers. However, when the hot plate refuses to heat up, Child decides to ad-lib her recipe into one for what she calls “beef tartare au gratin,” surprising Letterman by pulling out a blowtorch to melt the Gruyère cheese. Letterman is tickled (“What do you do, you cook this when the car breaks down on the highway somewhere?”), production plays a mooing-cow sound effect, and, grossed out after tasting it, he ultimately spits the raw ground beef into a napkin. The audience explodes.

“They [NBC] wanted a service show,” recalled Hal Gurnee, Letterman’s longtime director, to Newsweek in February of 1986, a few months before Child’s appearance. “They wanted Dave to do cooking demonstrations. And he resisted. He wanted to do a comedy.”

While Letterman knew that cooking demonstrations had always had their place on late-night comedy shows, the segments hadn’t exactly been comedic themselves until he started injecting his signature brand of sarcasm and sabotage.

Cooking demonstrations have been a reliable time-filler on talk and variety shows like The Colgate Comedy Hour since the late 1940s, as common as stand-up comedy sets or musical guests playing their latest hit. A guest comes onstage and cooks a dish as the well-dressed host gamely tries to follow along. The segments were—and still are—cheap to produce and great for helping fill airtime.

In an era long before celebrity chefs, most of these early cooking demonstrations were done by local yokels (like the “Cookin’ Cajun” Justin Wilson, an Ed Sullivan regular) or celebrities also known for their culinary chops. A 1975 episode of the Tonight Show finds sinister-voiced actor and noted gourmet Vincent Price teaching the self-proclaimed “kitchen klutz” Johnny Carson how to make a trout with aioli sauce. A year later, Price returned to cook salmon in a dishwasher (this was the ’70s, remember?), Carson merely acting as a bystander. These segments weren’t unfunny, per se—while cleaning the fish, Price cracked, “You been married as many times as I have, you learn to bone just about anything”—but they weren’t exactly compelling TV.

This changed with Letterman, who from the get-go aspired to send up all classic television propriety. He had gotten his start on a morning show in 1980, The David Letterman Show, where NBC adamantly instructed him to do cooking segments for an audience assumed to be housewives watching the 10 a.m. program at home. Both Gurnee and Letterman thought the entire concept of a cooking demonstration was ridiculous, and they intentionally resisted doing standard ones on the morning show, instead tapping an audience member to cook an omelet using a health food store’s freeze-dried “egg product” in one case, or asking pastry expert Meryle Evans to make an apple jumble using old-timey cooking utensils in another.

Once settled in at Late Night, the network forced him to do more typical segments. In one of the show’s earliest demos, Letterman hosted a casserole-cooking Liberace (“What do you do if you get Crisco on those rings?” Letterman asks the heavily accessorized pianist). He was even more cutting to the real chefs.

“[Dave] would ridicule the cooking,” Gurnee recalled in Inventing Late Night: Steve Allen and the Original Tonight Show, noting that Letterman got a big kick out of trying to introduce Velveeta processed cheese into every single dish, frazzling guests. “The ones who understood this…and could deal with Dave’s nonsense were the most effective guests.”

Enter Julia Child. Even if she was one of the first real television chefs, her early late-night appearances alongside Johnny Carson, Dick Cavett, and Tom Snyder weren’t particularly revolutionary. On her first Letterman appearance in 1983 (by now Letterman was hosting Late Night), promoting PBS’s Dinner at Julia’s, she made a croque monsieur. Unlike the more network-appeasing hosts she’d dealt with in the past, Letterman began screwing around instantly, mocking the sealed pack of ham (“We have enough here to make a wallet”) and questioning whether she would actually eat the messy sandwich.

An 89-year-old George Burns made an unexpected appearance. A cockroach showed up on set. Still, Child nailed her gourmet omelet.

Child, however, instantly got Letterman’s schtick and masterfully played along; she swiped the bread detritus onto the studio floor, encouraged Letterman to flatten the sandwich by leaning on in it with his palm, and pulled out a six-pack of Budweiser. All things considered, though, the sandwich was prepared without a hitch. By the end, it was clear Letterman had realized he’d found a new comedic foil, as adept as Chris Elliott or Richard Simmons.

By Child’s next appearance, on October 17, 1985, Letterman had amped up the hijinks, hurling eggs at bandleader Paul Shaffer and into the audience. An 89-year-old George Burns made an unexpected appearance. A cockroach showed up on set. Still, Child nailed her gourmet omelet. By her 1986 appearance with the blowtorch, both Child and Letterman had perfected this new form—the anti–cooking demonstration, if you will—and it’s still one of the funniest segments in television history.

Like many late-night television tropes we now take for granted, Letterman (with help from Child) had broken the mold and created an entirely new and funnier way to tackle the televised cooking demonstration. Other hosts began to copy him, and the coinciding rise of the Food Network and a new wave of television-ready chefs readily provided the comedy fodder.

By the late 1990s, Letterman’s chief rival, Jay Leno, would bring the excitable Emeril Lagasse on as a frequent guest, and the jovial George Foreman—promoting his grill—likewise became a good foil. Letterman acolyte Conan O’Brien, meanwhile, would show his disdain for the entire concept of cooking demonstrations right from the beginning of his run, insinuating Mr. Food was on cocaine during the cookbook author’s 1997 appearance before totally ruining his shrimp mariachi by slopping cookies and whipped cream over the pseudo-Tex-Mex dish. Even a fictional talk show would lampoon this already well-worn trope when The Larry Sanders Show had Paul Prudhomme on as a guest in a 1992 episode.

In many ways, the cooking demonstration run amok has become the ultimate test of a host’s improv skills and irreverence. A sycophant like Jimmy Fallon is more likely to kiss Éric Ripert’s ass (“Look at that, what is going on, that’s insane!!!”) while he puts together an ice cream sandwich for college kids. Meanwhile, a quick wit like Conan will intentionally try to raise Gordon Ramsay’s ire while they make tortellini, cranking the pasta machine rapidly and causing the filling to explode out the back of his piping bag. I must admit, even as they’ve become totally trite, cooking demonstration fuck-ups still make me laugh.

In a 2011 segment with Éric Ripert, he rigged a Geiger counter so the chef’s sole appeared radioactive, wore the fillet as a tie, and then started throwing a very expensive knife at the studio floor over and over again.

Of course, not all chefs have been game throughout the years. In a 1996 appearance on Letterman, Daniel Boulud was legitimately pissed off by Letterman’s wisecracks, wrestled a bursting champagne bottle from him (it caused both of them to get soaked), and was completely aghast as the host threw raw clams into the audience. The clip has seemingly been scrubbed from the internet.

“David has always been impossible with chefs,” Boulud told Yahoo! in 2015, explaining that the host refused to rehearse any banter before they went on air, almost ensuring the segment would bomb. “That show was exactly how he liked it: to basically throw you under the bus, every time.”

Never one to not run a joke into the ground, Letterman would continue this schtick until the very end of his late-night career. In a 2011 segment with Éric Ripert, he rigged a Geiger counter so the chef’s sole appeared radioactive, wore the fillet as a tie, and then started throwing a very expensive knife at the studio floor over and over again (“Dave, those knives cost a fortune!” Ripert screamed).

Four years after Letterman retired from late-night television, the anti–cooking demonstration trope still lives on, perhaps with a slight tweak. Whereas Letterman realized it was often up to him to inject humor into the staid demonstrations, today’s chefs—some of whom, like Alison Roman and Nicole Rucker, have built their brand on social media—are way more comfortable with being entertainers. And ironically, as late-night hosts are getting less absurdist (and often less funny), it’s increasingly the chefs who are bringing the hijinks.

Take José Andrés’s April 2019 appearance on The Tonight Show Starring Jimmy Fallon. The gregarious chef clearly knew the game and fully controlled the segment, intentionally ordering Fallon around so quickly that the hapless host had no way not to completely botch his tortilla española. It was exactly what Andrés wanted, and, even though we’ve seen it all before, it was admittedly a perfect five minutes of television.