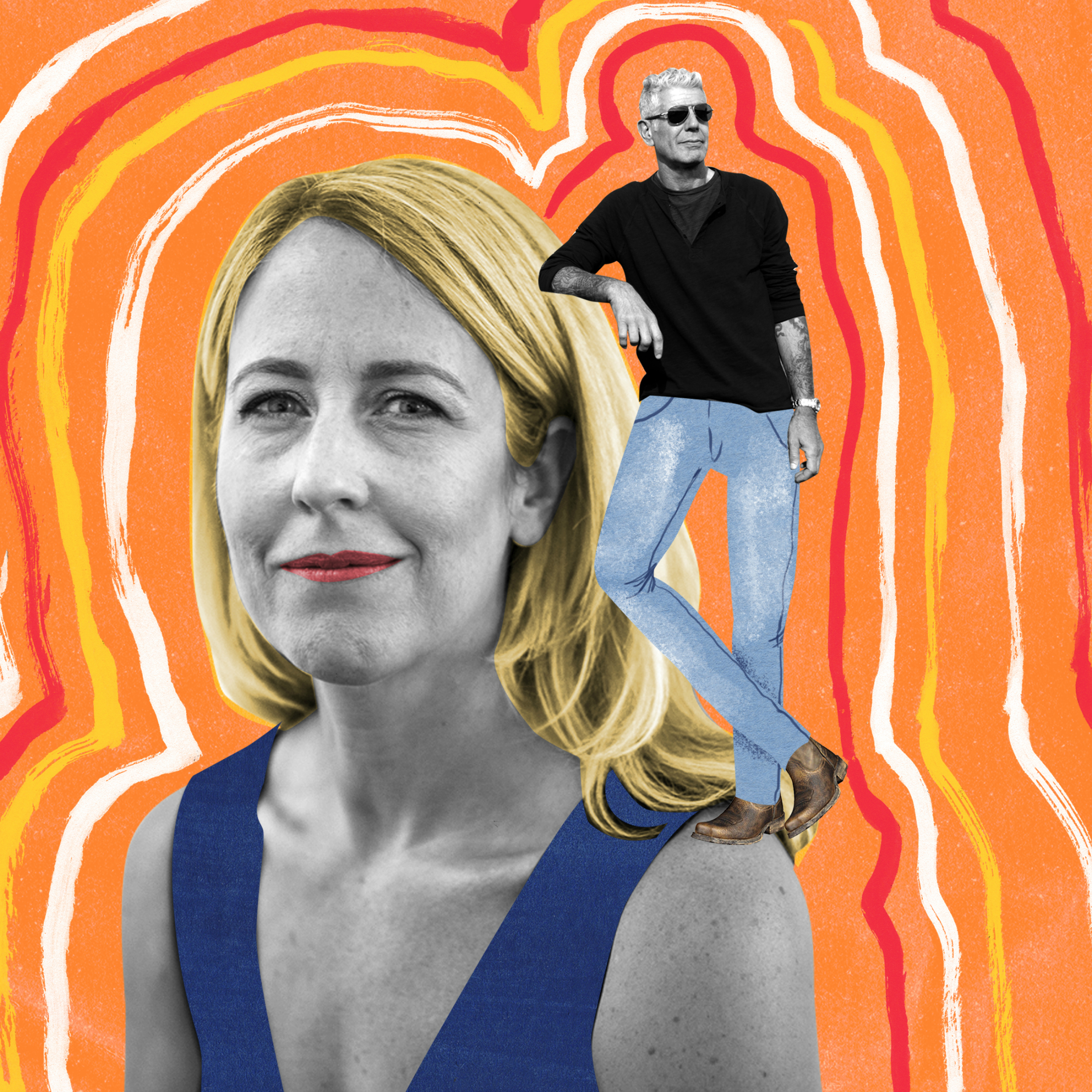 When Anthony Bourdain was looking for an assistant seven years ago, he knew he needed someone who could deal with his travel schedule. Someone who could swap dozens of emails a day about his production schedule, media event requests, and legal paperwork. So he turned to someone who could handle just about anything: Laurie Woolever.

“I knew she’d worked for Batali for years, who I imagined had a much more demanding and complicated life than I,” Bourdain says of Woolever, whose title, “assistant,” fails to reflect her evolution from Bourdain’s freelance recipe editor/tester to cookbook collaborator. “If she could handle that shit, I figured mine would be easy.”

Most recently, she coauthored the cookbook Appetites (ECCO) with Bourdain, a feat that prompted this interview. And though I was familiar with her byline in various food publications, like Saveur and Lucky Peach, I was compelled to know more about the woman whom Bourdain described as the “lone professional in a monkey house” in the book’s acknowledgements. First, I decided to check her out on Twitter. The topics I found covered: cinnamon fetishists, strong words against the “non-violent piñata,” and something about a moisturizer that smells like “the intake interview for geriatric assisted living.”

When she agrees to meet me, I’m excited—and nervous. I assure myself that I’ll be able to hold my own when we meet for grilled chicken parts and booze at Sake Bar Hagi, a subterranean spot that has the vibes of a Tokyo izakaya even though it’s located dangerously close to Times Square, land of Guy Fieri and unlimited soup, salad, and breadsticks. But upon arriving, I realize the restaurant is an undeniably and effortlessly cool place. Naturally, it was Woolever’s pick.

In person, Woolever strikes me as genuinely sweet and innocuous, not at all how I envisioned Bourdain’s faceless assistant with the witty-cruel Twitter, at which point I remember what Bourdain told me. “Laurie in person is, at least around me, quiet, professional, and serious,” he says. “Her writing—particularly her social media—is wicked, often filthy, and very, very funny. It’s useful to keep that in mind as one forgets at one’s peril.” I spend our dinner waiting for this spirit to surface, which doesn’t do so in the form of crudeness or biting humor, but instead in quick wit and muted coolness.

Before becoming Bourdain’s writer/assistant/collaborator, Woolever received a degree in “natural resources” at Cornell (she laughs when I raise my eyebrows) before The New York Times job listings section became her best friend. At 22, she begrudgingly started her professional career as an intern at the Brooklyn Botanic Garden before working as a private cook, taking a six-month professional course at the French Culinary Institute and then landing a gig through the school’s career counselor as Mario Batali’s assistant. Three years later, Batali introduced her to Bourdain when he needed someone to edit and test the recipes in his 2004 cookbook for the restaurant Les Halles.

And today, after stints as an editor at Wine Spectator and Art Culinaire, buying her apartment in Jackson Heights, and assuming her role as Bourdain’s assistant, she’s excited to see her name appear on the same cover as his on Appetites, exactly two years since signing on as coauthor in November 2014—an offer she remembers accepting immediately.

“When I got the email saying, ‘Anthony wants you to be his coauthor,’ I was like, ‘Um, yeah!’” she tells me enthusiastically, and then catches herself, adding coolly: “‘Yes, that’ll work.’”

When our nasu dengaku, a classic Japanese side dish of broiled miso-glazed eggplant, hits the table, an order that I suggested, she says it looks like “a vat of tar”; when she slides a tsukune off a skewer, she approvingly describes it as “basic and dirty.” At moments like these, you can see how she and Bourdain must vibe. While they most often communicate through email—Woolever jokes that they’ve spoken on the phone maybe three times in the past seven years—she went with him and the Parts Unknown TV crew to Vietnam in 2014 and Okinawa in 2015. Being with the crew in Asia was interesting, she says, but for the most part Woolever prefers some distance. “To be honest, there’s something very nice about not having to see your boss every day,” she says. “We keep a little mystery to each other.”

All of which is key. Because Bourdain travels nearly 10 months out of the year, he wanted someone trustworthy, who could stay rooted and help translate his first cookbook in over 10 years into something physical while he was jetting around the world, perpetually in another time zone. Therefore, he needed someone who could write, edit, test, and develop recipes as well as keep him and his vision in line, not someone who was always aiming to flatter. “I’m not going to try to tell jokes, and I’m not going to try to be funny and cute and charming,” she says. “I feel like a lot of people come at him and try to be cool, and my sense is that’s exhausting.”

From the start, Bourdain wanted a family-oriented cookbook, so Woolever used her experience from her other full-time job as a mother. She has a son just a year and a half younger than Bourdain’s daughter, and as a parent, she was able to throw out trusted recipes she’s made for her neighbors and friends and son for years—recipes that have been anecdotally tested no fewer than 10 times. The book’s black bean soup, for example, is her recipe, and it’s the go-to dish she gives to the families in her neighborhood whenever they have a baby. In the lasagna Bolognese recipe, along with beef, veal, and pork, the sauce calls for chicken livers, an addition Woolever has been making since 1996, when she discovered the tip in the Dean and DeLuca Cookbook.

However, not every recipe she pitched made it in. When she suggested a chicken or matzo ball soup, Bourdain eschewed it as “too nurturing and totally not [him].” Before Woolever was even able to suggest a ribs or tacos recipe, which she thought would be spot-on, Bourdain said they were “really obvious bro foods” and didn’t want to have people be like, “Dude, your ribs are awesome.’” But ultimately, Bourdain says, Woolever’s the more sensible one; he doesn’t see himself as the demanding one, but instead the one to take her suggestions.

And right up until she sent in her final edits on the book this past July, she was constantly throwing out those suggestions. In December 2014, just a month after accepting, she immediately started spending four to five hours a day, four to five days a week on the book. That process began with meeting with Bourdain, where they nailed down recipes and reached out to the chefs who inspired some of them (the two-day Korean fried chicken, for example, came from Mission Chinese chef Danny Bowien). By June 2015, the first manuscript was finished, after which she and Bourdain tasted recipes, shot photos, and argued about those “bro foods” and too-nurturing soups. And because she’s not just Bourdain’s coauthor but also his assistant, her work wasn’t finished after she submitted the final draft—she had to help manage promotional plans with the publisher, his agent, publicists, and tour management.

Now that Appetites is out in the wild, Woolever sees her role in Bourdain’s life sliding effortlessly back to the way it was pre-book. She says she hopes to dedicate more time to freelance writing as well. But at the moment, she’s also working on Bourdain’s to-do list: notably, helping him out with his new apartment.

“Lately, I was dealing with building management to make sure the washer and dryer were working in it,” she says, laughing. “I’m there to keep a life moving.”