Get a free recipe
Subscribe
An Egg Dressed for Every Occasion
By: Anna Hezel Photos: Christopher Hirsheimer 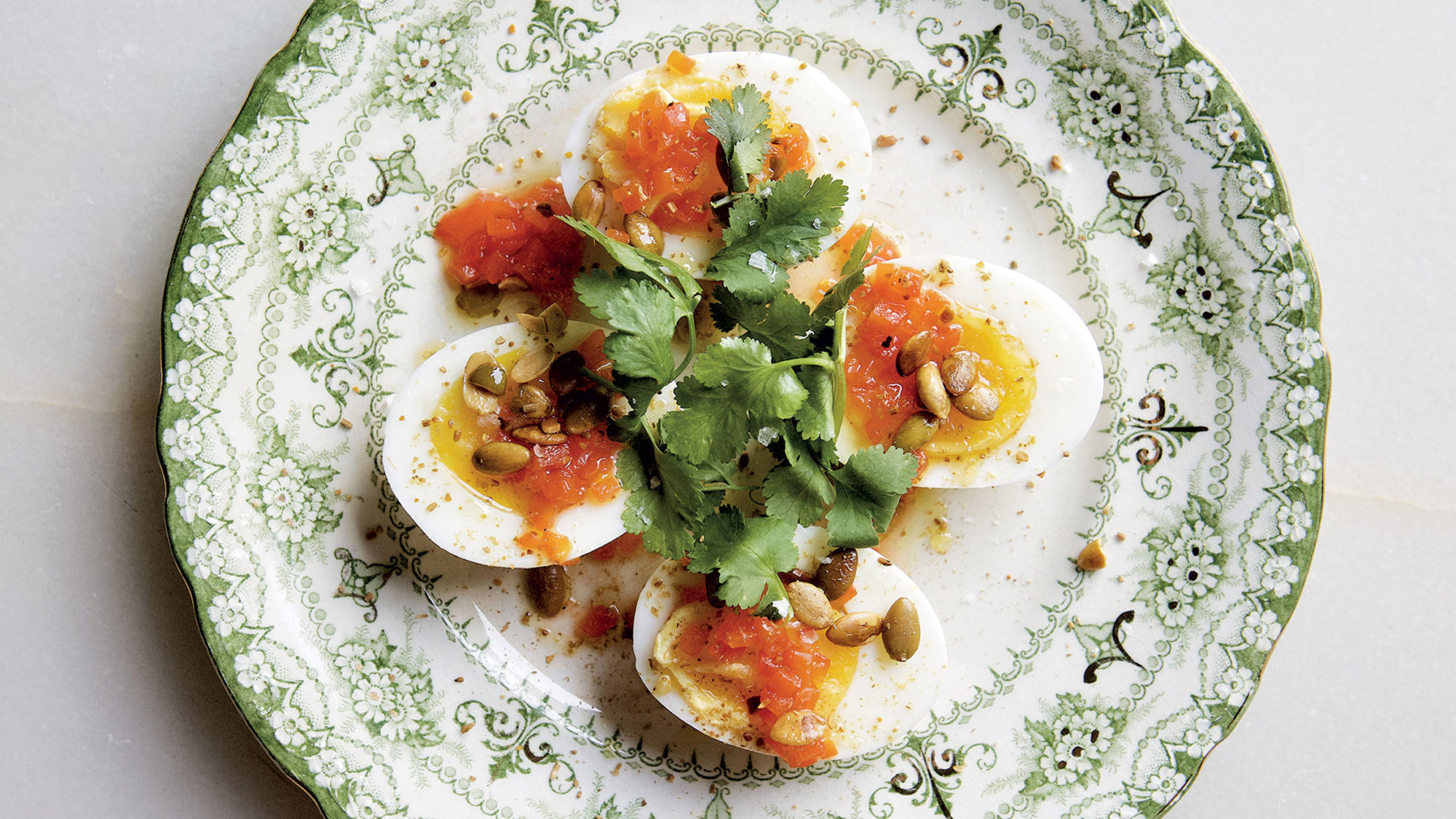 In a new cookbook, chef Ned Baldwin makes the case for the carefully composed boiled egg.

There are times when you meal-plan your way into an elaborate grain bowl, slow-roasted porchetta, or a batch of freshly fried doughnuts for breakfast. And then there are the other times—so many other times—when you open the refrigerator only to realize that there’s a handful of eggs, some parsley that’s just barely holding on to its verdance, and a few condiments left. Enter the dressed egg—boiled until the white is firm and the yolk is melty and orange (seven and a half minutes, to be exact), and then adorned lovingly with fried parsley leaves, toasted sesame seeds, bottarga, crispy shallots, or whatever odds and ends you have that will add some textural intrigue.

As Ned Baldwin, the author of the recent book How to Dress an Egg, explains, the idea came to him one night at his Manhattan restaurant, Houseman. “One day not long after we opened, I was halfway down the stairs to the prep kitchen, where I was going to make some oeufs mayonnaise to run as an appetizer, and suddenly I thought, why does it have to be mayonnaise?” he says of the moment boiled eggs broke out of their French restraints.

Oeufs mayonnaise, a French bistro staple and famous favorite of Julia Child, are themselves a sort of simplified version of deviled eggs. Rather than separating the yolks and blending them with mayonnaise and other seasonings, boiled eggs are simply slathered with mayonnaise and served with some crusty bread. “I went back up the stairs and made a relish-y thing with anchovy, capers, lemon zest, olive oil, and chile flakes, dabbed that on a halved egg, and then showered the halves with crunchy fried leeks and fried parsley,” says Baldwin. It was declared an instant hit among kitchen staff.

Since then, dressed eggs have been a regular fixture on the menu at Houseman, in one form or another. Baldwin has incorporated homemade XO sauce and topped the eggs with peanuts and scallions. There have been versions with bottarga, celery, and lemon, and versions with pickled bluefish, radishes, and tonnato sauce. It’s rare that a restaurant dish translates so well into the casual, haphazardly stocked home kitchen, but as Baldwin explains in the introduction to How to Dress an Egg, home cooking has always been a core tenet of Houseman (and an inspiration for the restaurant’s name). The book begins with an at-home technique for roasting an entire chicken in 30 minutes flat, which involves spatchcocking and chilling it, browning the skin slightly in a heavy skillet on the stovetop, and finishing it on the floor of a very hot oven. “It’s a restaurant trick that, unlike most restaurant tricks, translates well to the home kitchen,” says Baldwin, who cooks roast chicken in some form about once a week for his family currently living on Long Island. “I worked the recipe until it was very simple, and then I came up with three or four ways to ‘dress it up.’”

The same philosophy toward cooking is present throughout the book—strong techniques that can be renewed and reinvented three or four times before you manage to get bored of them. There’s a pork roast that you can tear into pieces and serve with steamed clams and fresh mint, or drizzle with pistachio-ginger sauce. There’s a roasted rack of lamb that you could eat with mint chimichurri, stuffed artichokes, tomatillos, and crumbled feta, or each of these separately as the week wears on. It’s a style of cooking that works whether you’re trying to keep 200 restaurant customers happy or just aiming to avoid cooking burnout while feeding yourself.

Before realizing that there was a name for them—“dressed eggs”—I’ve embraced this method plenty when I’m low on ingredients but in the mood for a carefully composed snack or a fussy breakfast. They can vary from phoned-in (salt and vinegar potato chip crumbs and some minced windowsill chives) to borderline brilliant (a sprinkle of spicy mentaiko, some toasted bread crumbs, and a few thinly sliced scallions). And eventually, when we’re all allowed to have guests over again, if you invite two or four or six extra people to a dinner party at the last minute and suddenly worry that you don’t have enough pre-dinner snacks, a plate of dressed eggs is just seven and a half minutes away.