Get a free recipe
Subscribe
How America Warmed Up to Cold Grocery-Store Sushi
By: Rachel Sugar Photos: Aaron Bernstein 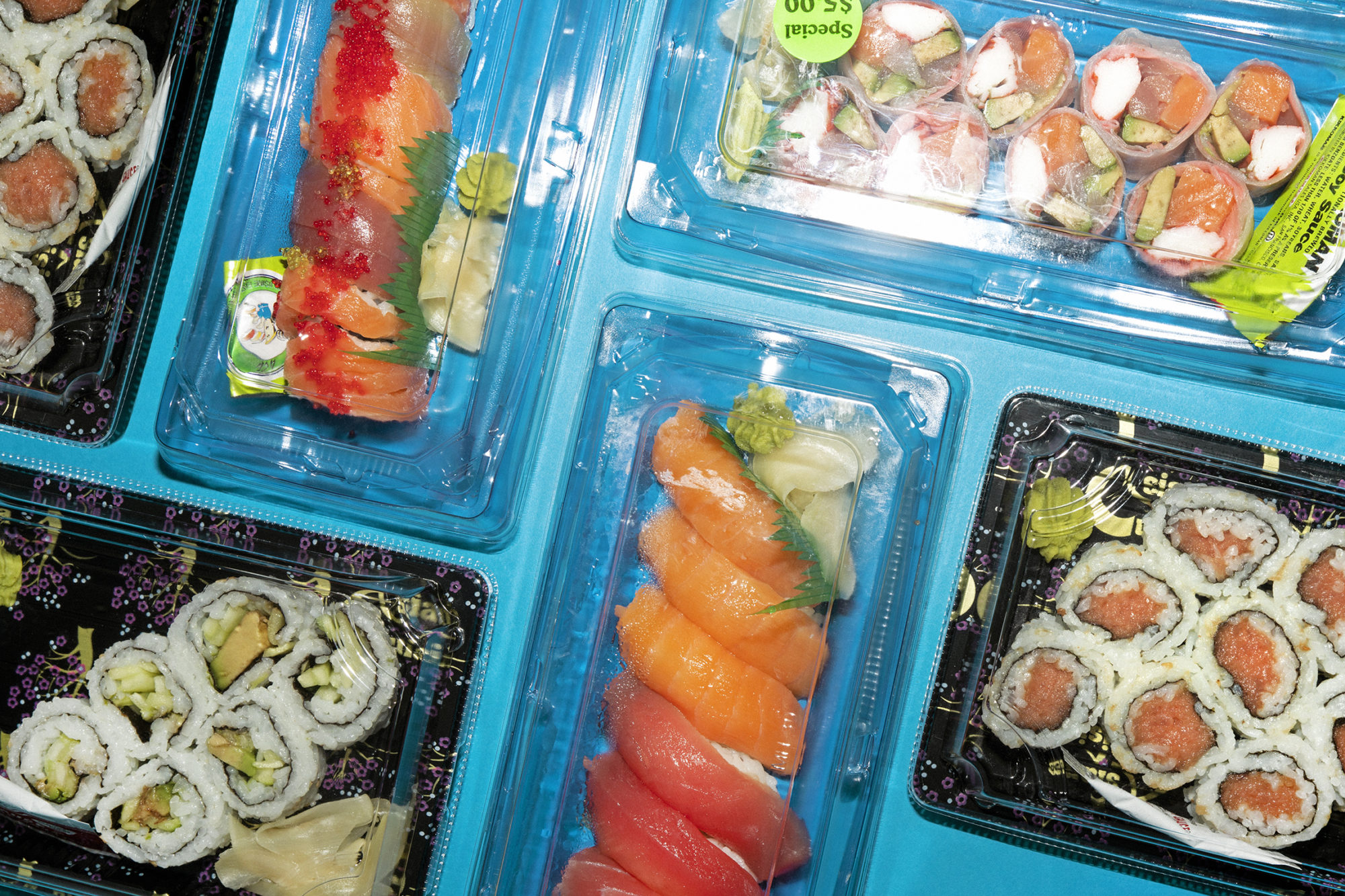 By the ’90s, sushi had been in the U.S. for decades. So why was it suddenly for sale at every grocery store?

I have, today, been to zero restaurants and have encountered sushi multiple times. I got a can of tomato paste at Whole Foods, and there was sushi. A coffee, at midnight, at my local bodega: sushi. I walked past a Target, and I did not go in, but if I had, there would have been sushi.

Despite various evidence to the contrary, such as all the climate news and…actually all news, it is a glorious time to be alive. The evidence for this is prepackaged sushi. It’s everywhere, all the time: in airports and train stations, at grocery stores, at sports stadiums, at Walgreens. I like consistency, so I find this reassuring: Yes, the quality varies, but the little plastic black-bottomed box, the line of fake grass, the petals of pickled ginger—they are almost always there.

It is difficult to definitively pinpoint exactly when sushi first debuted in American grocery stores, but a clear date in American supermarket history is September 1986: when Ryushi Ishii launched Advanced Fresh Concepts (AFC) and debuted an in-store sushi bar at a Vons supermarket in Marina del Ray, California. He wasn’t alone: Chemical engineer turned restaurateur Tonny Soesanto started selling Kikka Sushi at LA-area Ralphs. In 1990, Fuji Foods launched, making prepackaged sushi for local San Diego markets, and it didn’t take long to work its way inland, so that you could get sushi at Tom Thumb or Kroger or Whole Foods or Safeway or Bristol Farms, and if it wasn’t everywhere, it was in enough places to usher in a new era of American sushi: The Age of the Grocery Store.

Most scholars of sushi place the roots of the great American sushi boom to the early 1960s. Japan was emerging, at the time, as a major industrial power, and as a result, there was a whole generation of elite Japanese business travelers working abroad and looking for good sushi. A wave of high-end sushi bars rose up to meet the demand. “It wasn’t something that was common or well known,” says Sakura Yagi, COO of TIC restaurant group, a mini-empire of Japanese restaurants in and around Manhattan’s East Village. “So how did Japanese food survive that kind of climate, where quote-unquote regular New Yorkers didn’t really take to sushi? It’s because you had these corporate salarymen kind of funding these Japanese restaurants.”

When her father, Bon Yagi, opened Hasaki, in 1984, he was met with resistance. The concern: sushi was too elite, and expensive, for the bohemian East Village. “I had a couple of threatening letters saying ‘Oh, we don’t need a fancy midtown Japanese restaurant!’” says Bon Yagi. The sentiment was: There goes the neighborhood—the sushi place has arrived. “I said, ‘The quality is midtown, but the price is Lower East Side.’” He couldn’t afford the midtown places either, he recalls. That was part of the point.

There’s a standard trajectory we expect so-called “ethnic” cuisines to take in America. Sasha Issenberg, the author of The Sushi Economy: Globalization and the Making of a Modern Delicacy, lays out the steps. First you identify a neighborhood with a lot of people from the same place, serving “the food of the country, albeit maybe adjusted to local ingredients and availability, to immigrants from that community.” Then some “iconic establishments” emerge and become destination restaurants, attracting diners outside the community. Then some of the original restaurateurs—or their children, or grandchildren—start to open second- and third-generation restaurants “more clearly tailored to folks outside of their ethnic community,” Issenberg says. And eventually the cuisine—or at least some version of it—becomes widely accessible, and this, in grossly broad strokes, is the general paradigm of international food in America. But sushi had status from the beginning. It wasn’t immigrant food in immigrant neighborhoods. It was the food of global business.

By the ’70s, sushi had become “a thing” for savvy non-Japanese Americans, its rise bolstered by well-documented popularity among certain Hollywood stars, says Trevor Corson, the author of The Story of Sushi. “Sushi was still very exotic. But exactly because it was so exotic, it was very appealing to celebrities who were excited by the cachet of having the money and the culture to indulge in this exotic food: raw fish.”

You would think—I would think—that this “raw fish” detail might have been an obstacle for many Americans, who grew up eating their tuna canned and salmon poached. This is not entirely untrue. “The raw thing is a big deal,” Issenberg acknowledges, although as he points out, the flavors aren’t all that challenging. For one thing, it isn’t spicy. For the tastes of the ’70s and ’80s, Corson argues, it was a perfect fit, allowing people to feel as though they were eating something “brave and different” but without straying too far from their culinary comfort zone. And it was healthy, which fit perfectly in line with the new government dietary recommendations advising Americans to eat low-fat, low-cholesterol diets with more fish and more grains. Sushi wasn’t just trendy; it was essentially government-prescribed.

Which is not to say that everyone was eating it. Yoshi Tome, who managed, and then bought, what would become the Bay Area sushi staple Sushi Ran, recalls ’80s diners approaching with some trepidation. “Sushi was so new,” he laughs. “Everyone was thinking, ‘Oh my gosh, I’m OK to eat raw fish? I’m not going to die?” But while Tome was on a mission to educate regular, not-especially-hip Americans about safely eating raw fish—at one point, he recalls making brochures—sushi, the concept, had already penetrated pop culture. In 1984, tuna sashimi made an appearance in The Yuppie Handbook as an indicator of Yuppiehood. Molly Ringwald’s rich-girl character in The Breakfast Club (1985) brings sushi for lunch. It was more than a food; it was a character trait. And then sushi entered the grocery store.

If you weren’t feeling raw fish, no problem. There was always the California roll, an avocado-crab-mayo melange designed for American tastes. It is cooked. It is rich. It is good. Writer David Kamp calls it a “gateway drug to the hard stuff.” SUNY Binghamton professor Robert Ji-Song Ku calls it “sushi with training wheels.” Even now, it serves as an entry point for the hesitantly sushi-curious and an old standby for people who do not quite trust the turnover at their local Kroger. Another important trick, it turned out, was to have a chef working behind the bar, a human assurance of freshness. “That’s very important with sushi,” Ricky Wong, the hot-food operations director at Bel Aire Markets in Sacramento told Supermarket Business in 1995. “If you put it there in the case and walk away, people don’t know how long it’s been there. So they’re not going to buy it.” A visible chef wasn’t just a promise of quality; a chef offered “theatrical flair and international ambience.”

It was a natural fit. Modern sushi, after all, began as convenience food. “Street stands selling sushi were the McDonald’s drive-thrus of old Tokyo,” Corson writes, and in the early 1800s, you might stop by for a few pieces of nigiri, which you’d eat with your fingers, “more a snack than a meal.” After World War II, the stalls were banned—a casualty of new American-imposed health regulations—and sushi got expensive until the dawn of conveyor-belt sushi in the ’90s.

Meanwhile, in the United States in the ’90s, grocery stores were losing market share to gourmet and specialty stores; people were cooking less and dining out more, and as a result, supermarkets scrambled to increase their prepared-food operations with pizza and panini and salads and sushi.

“That’s the beauty of music, and it’s the same with sushi. The chef makes it for you, and in one bite, it’s gone.”

But when it comes time to eat sushi, refrigeration is less than great. Ideally, sushi would be served with the fish at room temperature and the rice slightly warm. But if it’s premade at the grocery store, then it sits, chilling in the refrigerator case, for several hours. If it doesn’t do the fish any favors, says BK Park, of Mako, in Chicago, it’s even worse for the rice. “The rice is going to be very cold, the rice is going to be very hard, and the quality’s not there,” he says.

When customers ask Tome if his restaurant will cater parties, he declines. “They argue with me. I say, ‘No, it’s not the best way to enjoy sushi. I’m sorry. I cannot serve it to you.” It’s edible, he tells me. It’s just not enjoyable.

To Kiminobu Saito, of Sushi Note, in L.A., it’s about the very essence of sushi itself—it’s meant to be ephemeral. “That’s the beauty of music, and it’s the same with sushi. The chef makes it for you, and in one bite, it’s gone,” he says. But there’s nothing ephemeral about supermarket fish: You can buy it today and eat it tomorrow, and if you don’t finish, you can have the rest as a snack.

And yet even he’ll concede that it has a place. “It’s a great entry point because it’s an inexpensive one,” he says. “As time goes by, it’s, oh, OK, I started with a California roll. Maybe I’ll try a spicy tuna roll next. If I like tuna, maybe I can go onto yellowtails. And once you know what you like, then you’re willing to spend a bit more money trying something a little bit more adventurous.”