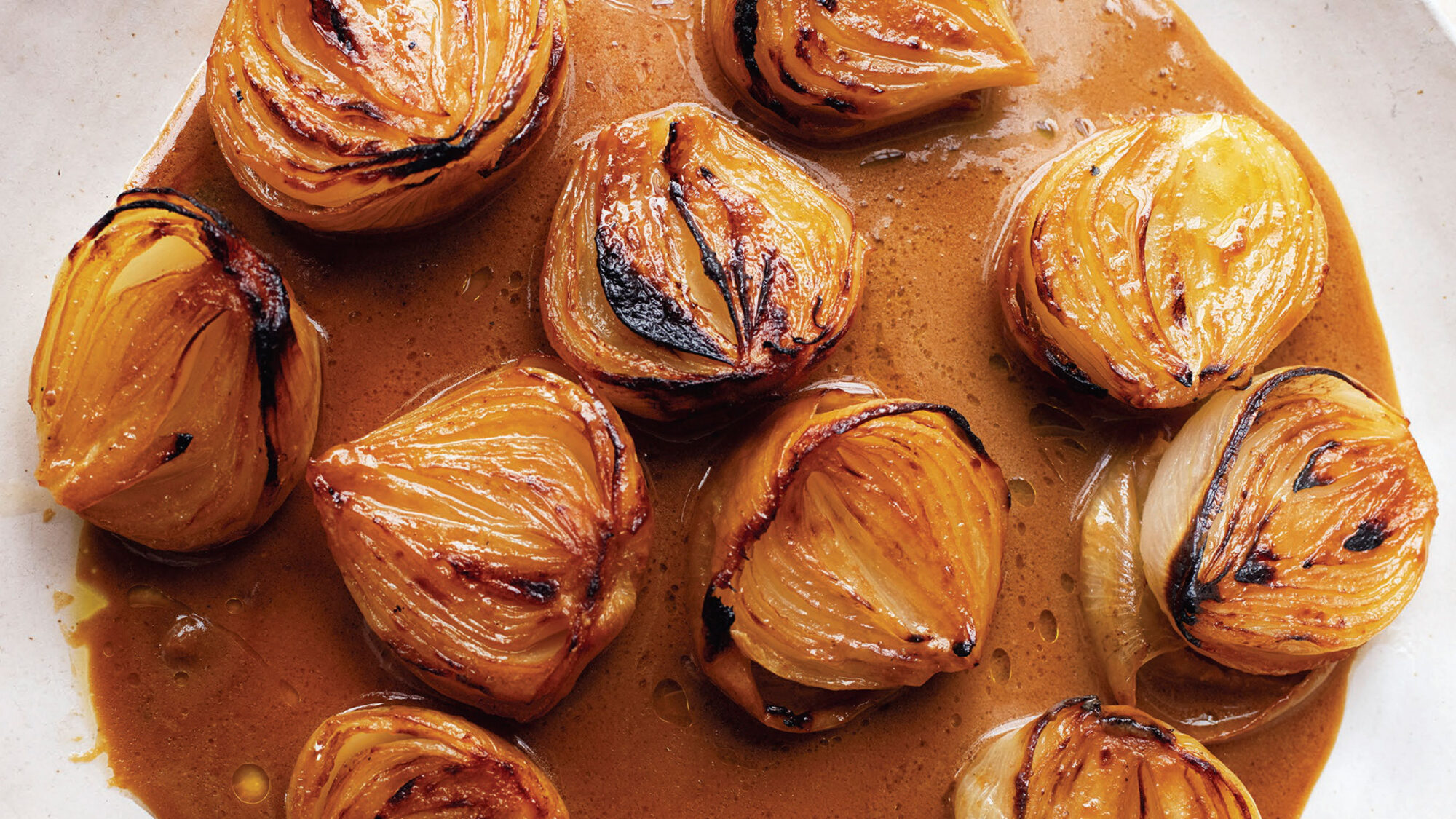 Spin those onions into dinner gold.

A few weeks ago, Bread and Salt Bakery in Jersey City posted an Instagram photo of a single gnarly red onion, solid and raw in its papery skin. The image arrived alongside an announcement that, in order to keep the lights on while adhering to indoor-dining guidelines, the restaurant would begin offering a $380 tasting menu for 4.5 guests per night. The theme of the first dinner? Onions.

The post was, of course, a very bleak joke about the economic realities of restaurants being forced to operate at 25 percent capacity. Reconciling this economic blow with the costs of operating a kitchen and paying staff would require a magic trick, like spinning gold from an ingredient that costs $1 per pound. But if any piece of produce could pull it off, wouldn’t it be the onion?

There’s no doubt you could eat the allium fifteen different ways over the course of a meal, and each could be unrecognizable compared to the next. The watery snap of a thin slice of pickled red onion is miles away from the silky, charred sweetness of a yellow onion cooked in the embers of a fire. A five-pound bag of ordinary white onions can bring you dainty batches of James Beard’s famous butter-and-raw-onion sandwiches, and it can bring you melty, decadent grilled cheese sandwiches packed with jammy caramelized onions.

“If you are ever running late getting a meal to the table and the crowds are rousing, never forget that the raw onion sitting on your counter is your ultimate weapon in deception,” write Yotam Ottolenghi and Ixta Belfrage in their newest book, Ottolenghi Flavor. “A raw onion will only ever look, smell, and taste like a raw onion. Quickly chop it up, though, put it into a hot pan with some oil, let it take on some color, and it becomes something else entirely.” The book dedicates an entire chapter to alliums, bringing to center stage a category of vegetables that is too often relegated to the foundation of sauces and sofritos. There’s a take on leeks vinaigrette, topped with a miso chive sauce and crispy fried garlic. There are Calabrian Tropea onions, with purple bulbs and lush green stems, which are halved and grilled to sit atop a spread of whipped feta and an herby green gazpacho. There are wispy onion rings, fried in buttermilk and turmeric, with nigella and caraway seeds.

One of the most visually arresting treatments uses a stovetop skillet to turn a pound of small red onions into delicate charred petals, floating on a deep-scarlet reduction of pomegranate juice. Another star of the book relies on even fewer ingredients: yellow onions, butter, and miso, braised in the oven until the onions have shrunken and caramelized, and until the liquid has formed a thick, golden gravy.

“I think one of the things that’s really important, if you’re going to turn an onion into the center of attention, is just to add complexity,” Ottolenghi tells us. “So miso, anchovies, on the one hand, and then the petals that use reduced pomegranate juice as a glaze—that really, really helps.”

You don’t have to necessarily seek out any local, seasonal, fancy varietals to pull most of these techniques off, but while testing the recipes, Ottolenghi and Belfrage noticed one big factor in their success. “I think it’s quite important when you cook onions whole that they’re not massive, they’re quite small; so that they cook evenly, within the allocated amount of time,” says Ottolenghi.

Larger onions, they discovered, which are easier to find in American grocery stores, have a higher water content, which makes it harder to cook them evenly, and harder to achieve a concentrated, sweet flavor. If your grocery store only sells the softball-sized variety, larger shallots can make a convincing stand-in. But when you do happen upon a pile of uniform, round, golf ball–sized onions, pick up an extra bag of them to keep in the crisper. They could turn into the best thing you eat for dinner all week.