Get a free recipe
Subscribe
A Baker’s Golden Rule: Not All Butter Is Created Equal
By: Andrea Strong Photos: Kate Kosaya 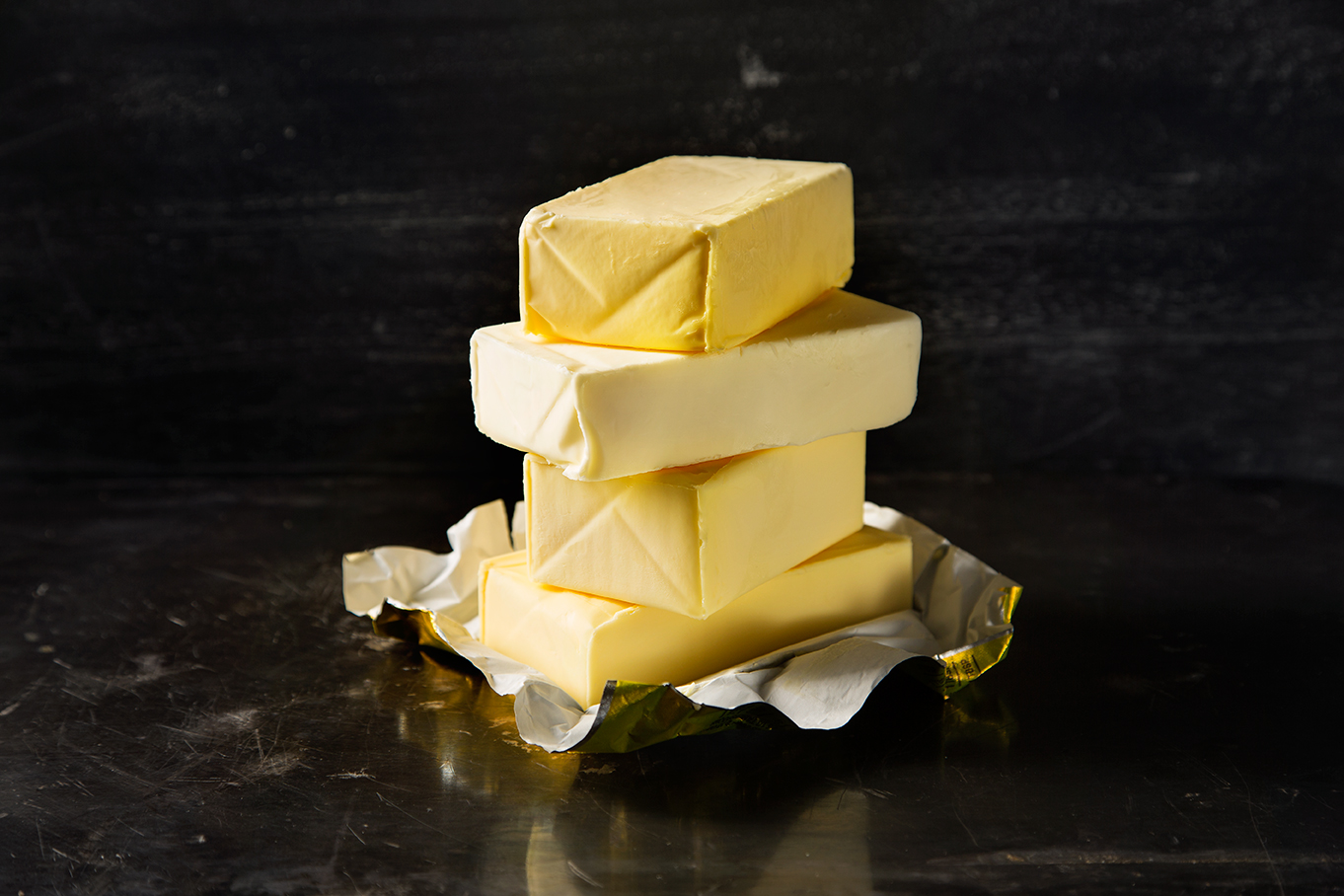 Butter. It’s a big reason the food we cook at home tastes good. (And a secret weapon for restaurant cooks, pastry chefs, and professional bakers.) But not all butter is created equal. At its most basic, butter is simply churned cow’s milk, a process that separates the solid butterfat from the liquid buttermilk. The result is a spreadable, soft, yellow-to-white solid (depending on the cow’s diet) that comes salted and unsalted, organic and commodity-style, all with higher and lower concentrations of butterfat, which is a key metric. These distinctions can make a difference to your baking project—whether it’s piecrust, cookies, cakes, biscuits, or muffins. So what type of butter should you stock in your fridge? We spoke to the experts.

The first rule of thumb? Always buy unsalted. “No matter what I am making, I use unsalted butter,” says Carey Bell, head baker at Proof Bakeshop in Atlanta, Georgia. With unsalted butter, you can control the salt content, which is an essential step in baking. Bell’s second rule? Never use whipped butter from a tub or light butter in baking. The reason: Its moisture content is too low.

Bell also explains that there’s a crucial distinction between American-style and European-style butters. Most American butter on your grocer’s shelf contains around 80 percent milk fat, which means it’s about 16 to 18 percent water and 1 to 2 percent milk solids other than fat (sometimes referred to as curd).

Bell favors European-style butters with a higher butterfat content; most average around 82 percent, but some tip the scales at 83 or even 84 percent. That extra butterfat means less water. And water can be the enemy. Lower moisture helps you create cakes that rise higher, cookies that crisp more evenly, and flakier pastries. It’s the difference between cookies that are good and cookies that keep you awake at night wondering when you might have a chance at eating more of them.

Bell’s brand of choice is Wüthrich (pronounced we-trek), a butter made in Wisconsin in the European style, which comes in at a whopping 83 percent butterfat. “It’s the highest-fat butter we could find,” she says.

She explains that a European-style butter is especially important when laminating dough for croissants and other viennoiserie. “Laminated goods are all about that rich butter flavor and that airy texture inside. That high fat ratio is perfect,” she says.

But not everything benefits from high butterfat, Bell explains. “You can stick to a standard supermarket butter for chocolate chip cookies, because you are adding so many other things that it doesn’t matter as much.” She also cautions that if you are using Grandma’s old recipe for cookies, stick with lower fat content because that’s probably what Grandma was using at the time.

The other thing American-style butter works best for? Pâte à choux, a light pastry dough used to make profiterole, éclairs, quenelles and gougères. Executive pastry chef Valerie Nin of Grill 23 & Bar in Boston suggests using Cabot, an 80 percent unsalted butter. “It gets its lift from the steam escaping from the dough; a butter with more water in it can contribute to a crisper, lighter cream puff,” she says. Nin favors the higher fat Plugra, an 82 percent butter made in America, for desserts when you are trying to achieve a richer flavor, like you would want with rich chocolate sauces. She also uses it in laminated dough and butter-enriched dough.

The best butter for piecrust is the subject of some debate, explains Joshua Livsey, the executive pastry chef at Harvest in Cambridge. “A higher-fat butter is sometimes preferable because excessive moisture in a dough will hydrate the flour too much and cause gluten development, which leads to a tougher dough that’s less tender and flaky,” he says. “On the other hand, the flaky crust comes from the chunks of butter melting in the oven and releasing steam, which comes from moisture. You’re looking at very fine details at this point. In my opinion a good piecrust comes more from technique rather than the fat content of the butter—there is only a few percent difference in moisture content between the two.”

For everything else, from muffins and cakes to laminated dough and biscuits, Livsey says there is no room for debate. He goes with a European butter with that higher butterfat content. “The fattier the butter, the better.” He has a variety of favorites, including Plugra, Kerrygold from Ireland, which has a bright yellow color from its grass-fed cows, Lurpak from Denmark, and Anchor from New Zealand made from the milk of free-range, grass-fed cows. “Both Denmark and New Zealand have stricter rules on hormones and antibiotics,” he says. “Which makes their products very appealing.”

While he loves Kerrygold, he has one word of caution: If you are doing a buttercream, the color will come out a bit more yellow, so stick to a Plugra if you prefer a whiter color.

In addition to the above, Livsey loves using a cultured butter—one like Organic Valley that’s inoculated with live cultures, though he says it’s not ideal in baking or cooking. “With a cultured butter, you get that great tang and added flavor,” he says. “That’s a good finishing butter, but you don’t want to cook with it because if you do, that tang from the taste will get lost.” Instead, slather it on bread or use it to finish a sauce. It’s butter, after all, and it makes everything better.

Cabot Creamery is a co-operative of 1,100 dairy farm families located throughout New York and New England. The products are all antibiotic and hormone free, but it is not certified organic. Cabot butter averages about 80.6 percent butterfat.

An 82 percent butterfat European-style butter made in America. Its cows are not antibiotic and hormone free.

This rich butter is made in Ireland and has a pale yellow color, because it is made from grass-fed cow’s milk, free of antibiotics and hormones, with 82 percent butterfat.

Anchor butter is made in New Zealand, where cows are grass-fed and free of hormones. Like Kerrygold, Anchor is yellow because of the grass the cows are eating, compared to the white butter derived from the milk of corn-fed cows. It is 82.9 percent butterfat.

Produced in Iceland, this butter is made from cows that are hormone and antibiotic free and fed on grass and hay, which contributes to its deep yellow color.

This butter is made in season from May through September, when cows are feasting on summer pastures. It is organic and comes in at a whopping 84 percent butterfat.