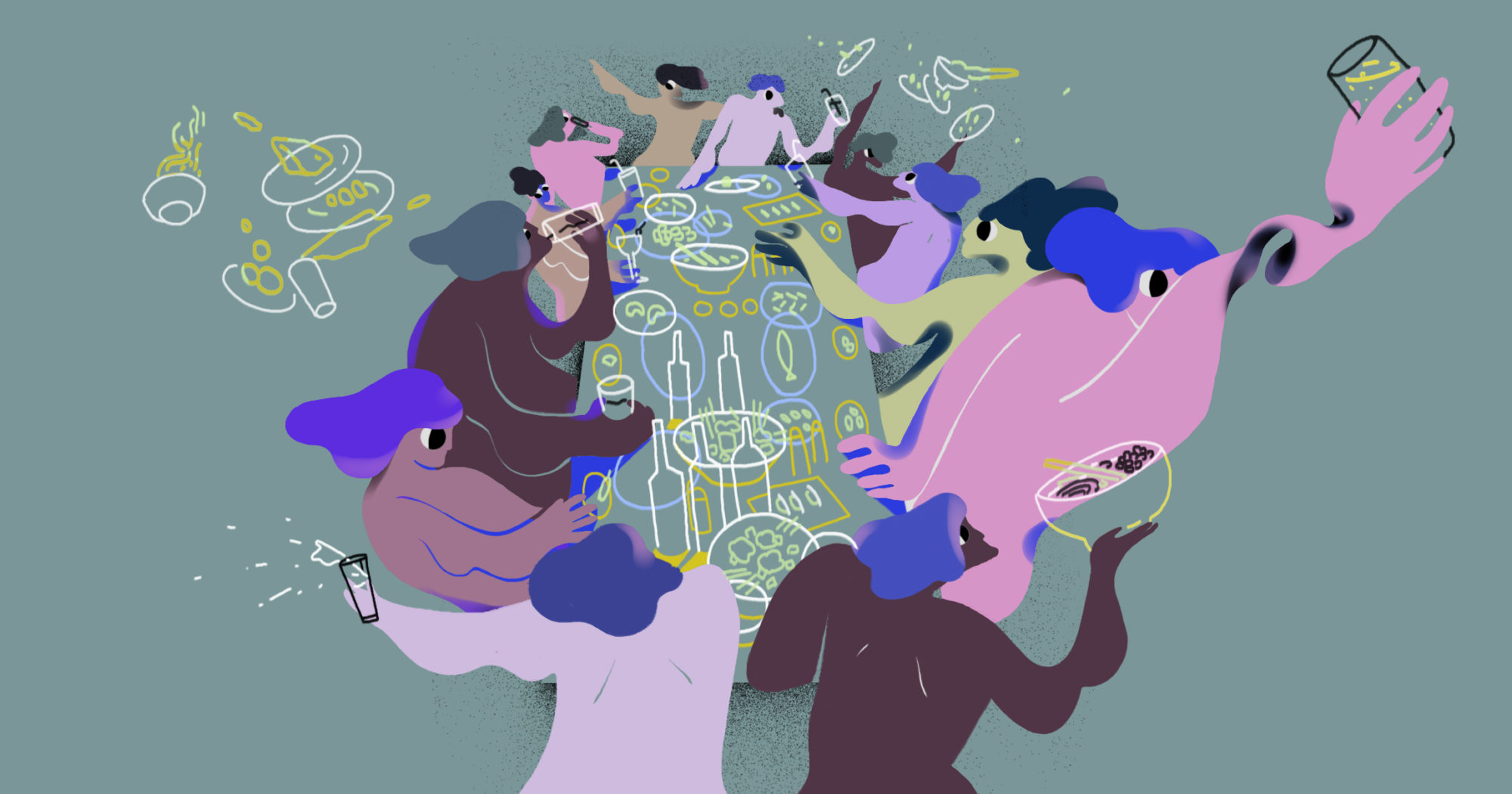 In this short work of fiction, a group of curious children eagerly await a grand meal.

Little children stood listlessly in groups acting the way children were wont to act all over the world. Becoming interested in one thing then losing interest very quickly and moving on to something else. The older kids who had witnessed the festival a few times in the past tried to act like they knew it all. They strutted around one minute curious to see things begin like everyone else then acting blasé like they had seen it all the next minute. Then they were curious all over again asking questions and growing petulant when their parents seemed distracted and didn’t respond quickly enough.

“What color of alien was it going to be this time?”

“If they were so happy how come they didn’t smile?”

“Why did they do it anyway?”

“Why aliens why not real people like all of us?”

“Was it true that the alien got to eat whatever they wanted before it was done?”

“Was it also true that in the past an alien had asked for something that was not available here and they had had to go over the hills and valleys and through many mountains and rivers until the finally got the delicacy he had requested and then they had brought it for him and after he ate then the deed was done?”

“Was it ever going to stop?”

Shhhh. Hush. You ask too many questions the Elders said to the little ones. Who has questions ever helped in this world, they asked, even as they answered the children’s questions with a question of their own.

Turning once again to the children they told them to just watch and observe the proceedings. That was how the Elders had learned the rules. That is how the children were going to learn, if only they could settle down and watch.

The children watched and observed and grew quiet for a little while then like the restless little weaverbirds that they were they began to ask questions again.

“What color of hood was it going to be this time?”

“Would it be a black, white, red or purple hood?”

“Was it true the rumors that they had heard at school that the alien would not be hooded anymore? Why was a hood even necessary? Was there anything that was being hidden from their eyes? Even if they saw the proceedings with unhooded eyes what difference was it going to make at the end of the day when all is said and all is done?”

Asking questions to which no answers were obviously forthcoming becomes boring after some time especially for young children who do not have the patience of philosophers.

So they began to do that other thing that children liked to do even as the adults began to go about the order of business of the day. The adults were adept at this for they were not learning the ropes. They had done this deed many times and had become adept at what was going to be done.

So the children began to play their games.

They played Boju-Boju, a game of hide and seek. They all went into hiding while the Seeker ran around saying “boju boju o” and looking for the luckless victim to catch, who then becomes the next Seeker.

They played There is Fire On the Mountain Run Run Run. They ran in every direction screaming about the fire on the mountain and asking everyone to run, run, run.

They played Tinko Tinko. The sound of their little hands growing surprisingly loud as they slammed against each other.

They played Who Is In The Garden after they had formed a circle…a big, big circle.

They played the favorite game of the boys, Police and Thief. Some played the good guys while some played the bad guys. They searched furiously for the missing item until it was found.

And the girls went off on their own to play their own game of Ten-Ten.

And the boys found a piece of brown rope and began to play Tug of War. They stretched their little muscles as they pulled and the losing side derived a lot of pleasure as they fell on the ground screaming the words yakata.

All that playing had made them hungry and now their mind was on the food that they were going to eat after the hanging. The entire event was really about the feasting after all. So once again they returned to the subject of food.

Like the well-brought up kids that they were they began to talk politely about the food that the alien was allowed to eat before the hanging.

“So if the alien wants a cake as big as a house they’d order the cake?”

“Was it true that even if they wanted a big tub of ice cream they could get it?”

“Was it true that the alien could order any kind of sweet, toffee, candy, gum, that they wanted and it would be given to them?”

The answer to all their questions was of course yes. Just before the hanging the alien could request for any kind of food or drink. Any quantity and it would be provided.

They still found it somewhat difficult to wrap their heads around this fact. That it was even remotely possible to request for a food or drink or a type of candy and it would be provided with no questions asked. These children lived in a world where it seemed like they were always asking for things and in this world it was always the job of the adults to say no to their requests. Perhaps, the fate of the alien was not a bad one, really when you thought about it the children thought but did not say out aloud.

And the phrase it wasn’t so bad rang like a song that played over and over again in their young heads.

“The day is far spent,” the Announcer said.

It was funny how the Announcer came up with new expressions every year. Was there a little book he consulted from which he pulled out the expressions?

“We must begin to do what we have gathered to do,” said the Announcer.

This too was a new expression. In the past he had used words like…

“Now the hour has come.”

“It is that time of the year once again.”

“And now, let us do as we have always done.”

They brought out the alien. The alien’s face was not covered. The alien had the option of having their faces hooded or not.

According to the elders this idea of deciding whether to have their face covered or not once yet another proof of how much choice the alien had in the matter.

Once again the Announcer cleared his throat and intoned.

“Accept our little sacrifice which we offer up on to you.”

The alien was led to the stage. The rope was fastened around the alien’s neck. The lever was pulled. The neck snapped. The alien was dead.

It was the children that started the race to the Feasting Hall where the food was already prepared and waiting. Soon they were joined by the adults.

They fell on the food and feasted with both hands. It was one day when one could eat as much as they wanted and even more. There was nothing wrong with stray pieces of food falling on the floor or drinks spilling from cups that were running over. It was allowed. That was even the point of the feast.

Some said it was the food.

Some said it was the drink.

Some said it was the salubrious weather.

Some said it was a sign that the alien sacrifice had been an acceptable one.

What no one could argue about was that after the hanging of an alien everyone always slept soundly. And the only sound that could be heard all through the night was the relentless musical song of deep snores.

E.C. Osondu is the author of the collection of stories Voice of America and the novel This House is Not For Sale. He is a winner of the Caine Prize and a Pushcart Prize among other prizes. His fiction has appeared in the Atlantic, AGNI, n+1, Guernica, Kenyon Review, McSweeney’s, New Statesman and many other places and has been translated into over half a dozen languages.