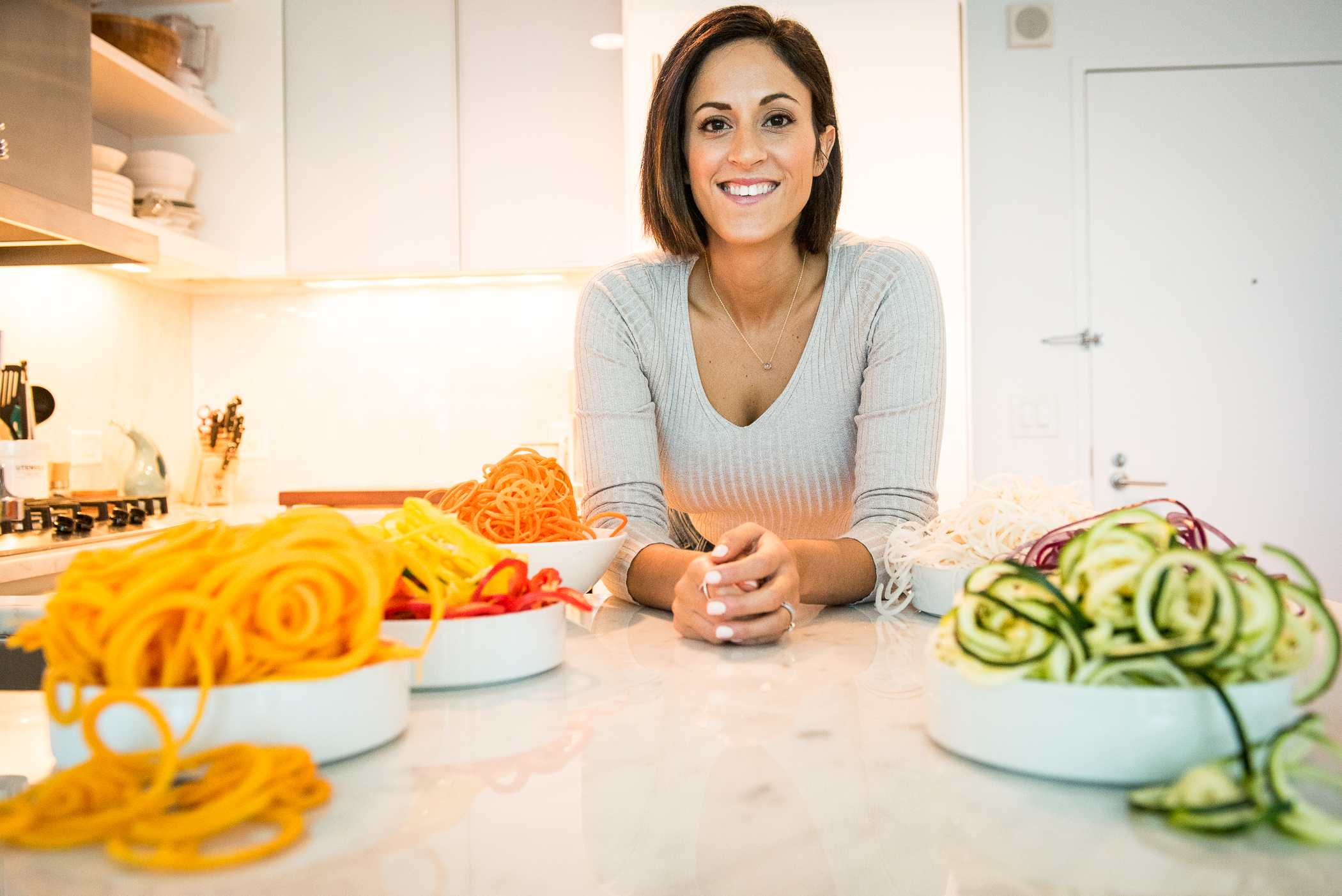 “One day I got in a fight with my boss,” Maffucci says, wearing jeans and a nubby caramel-colored sweater. “I called my now-husband and I said, ‘I think today’s the day.’ He said, ‘If you really think this is what you want, and you think you can make it happen, then go for it.’”

“‘Well, of course I think I can make it happen!’ I said. So I hung up the phone, cried, and walked out of my office building.”

Maffucci didn’t have a business plan, but she did have a local Starbucks with Internet access. The next day she found a seat, got online, and purchased a domain name: inspiralized.com.

“Turns out I was an inherent entrepreneur.”

That purchase would lead her to become one of the most sought-after names in the health-food world, and, eventually, a New York Times best-selling author. Maffucci, 29, now manages an online community seeking both her low-carb, vegetable-driven recipes and her candid blog entries; she has published two cookbooks, Inspiralized and Inspiralize Everything; and she has an Instagram following of over 160,000.

“Honestly, I always thought that I would find a husband, he would make enough money for me to quit my job, and I’d become a mom,” Maffucci confesses. “Up until Inspiralized, that’s what I thought my life was going to be—and I think that would have been fine. But I also had this itch to really own something.”

“Turns out,” she continues, “I was an inherent entrepreneur.”

It all started with dinner at her mother’s house. On a strict vegan diet to temper her type 1 diabetes, Karen Maffucci served her daughter raw “pasta” made out of zucchini. “I took one bite, and I could not believe the consistency—how much it really felt like spaghetti,” says Ali Maffucci. “I’m Italian-American and have always struggled with portion control and loving pasta. So when I tasted the zucchini noodles, I thought, ‘Well, if you put a nice hot tomato sauce on this and some protein and maybe some cheese, I bet it would taste like real pasta.’”

She borrowed her mother’s spiralizer, a crank-action kitchen tool that turns vegetables and fruits into noodles in seconds, and served her husband a similar meal the next night. “I looked at him, waiting to see what he would think, and he had the exact same reaction,” she says.

Maffucci then took to the computer, searching the Internet for mentions of the term “spiralizer.” Nothing. “Spiralizer recipes,” she typed next. One result: a simple recipe for zucchini noodles with pesto from the New York Times. “But the zucchini was julienned [hand-cut into matchsticks]; it wasn’t even spiralized,” says Maffucci. She kept cooking—playing with celeriac, chayote, and taro root, not just zucchini—and she turned on Google alerts for every single variety of the word “spiralize” to track the trend she was about to be responsible for growing. (The marketing savvy she’d gained in that corporate job made some of the suffering worth it in the end.)

Maffucci at her home in Jersey City, New Jersey

What Maffucci didn’t love was her mother’s flimsy spiralizer. Realizing that the other vegetable noodle makers on the market were clunky and didn’t stand up well to heavy usage, Maffucci engineered a higher-quality product that’s more compact and sits lower to the table at an ideal height. “I had the opportunity to put my logo on another, successful spiralizer, but it didn’t feel quite right,” she explains. “I wasn’t 100 percent behind the product, and I got a real bad vibe at the meetings.” So Maffucci went to her uncle, who happens to be in the kitchenware-licensing business, with a PowerPoint presentation detailing her business plan and her design for the Inspiralizer.

The suction cups that adhere the Inspiralizer to the table are vacuum-strong—necessary to keep the machine steady when you’re running tough root vegetables through it—and it’s made of a tough, BPA-free plastic. Maffucci also reduced the size of the central coring blade. “On most of the spiralizers, they’re so big, and that wastes a lot of the vegetable,” Maffucci says. The Inspiralizer’s smaller coring blade helps make use of a larger percentage of each raw ingredient. To date, she and her uncle have sold just under 100,000 units, and there’s another product in the works for early 2017. Maffucci was mum about the details, but did share that “it’s basically the same idea of replacing your comfort foods with vegetables.”

Despite all of her success, Maffucci’s life hasn’t changed all that much. She and her husband enjoy traveling during their downtime; they just returned from Thailand. She’s close to her sister, who lives in the same building Maffucci does, which is also the building that houses Inspiralized LLC’s brand-new offices.

The dream now: for the Inspiralizer to reach a new audience.

“New mothers,” she says. “Women are a bigger part of the workforce than ever, and I think that it’s important to have healthy food on the table—quickly.” 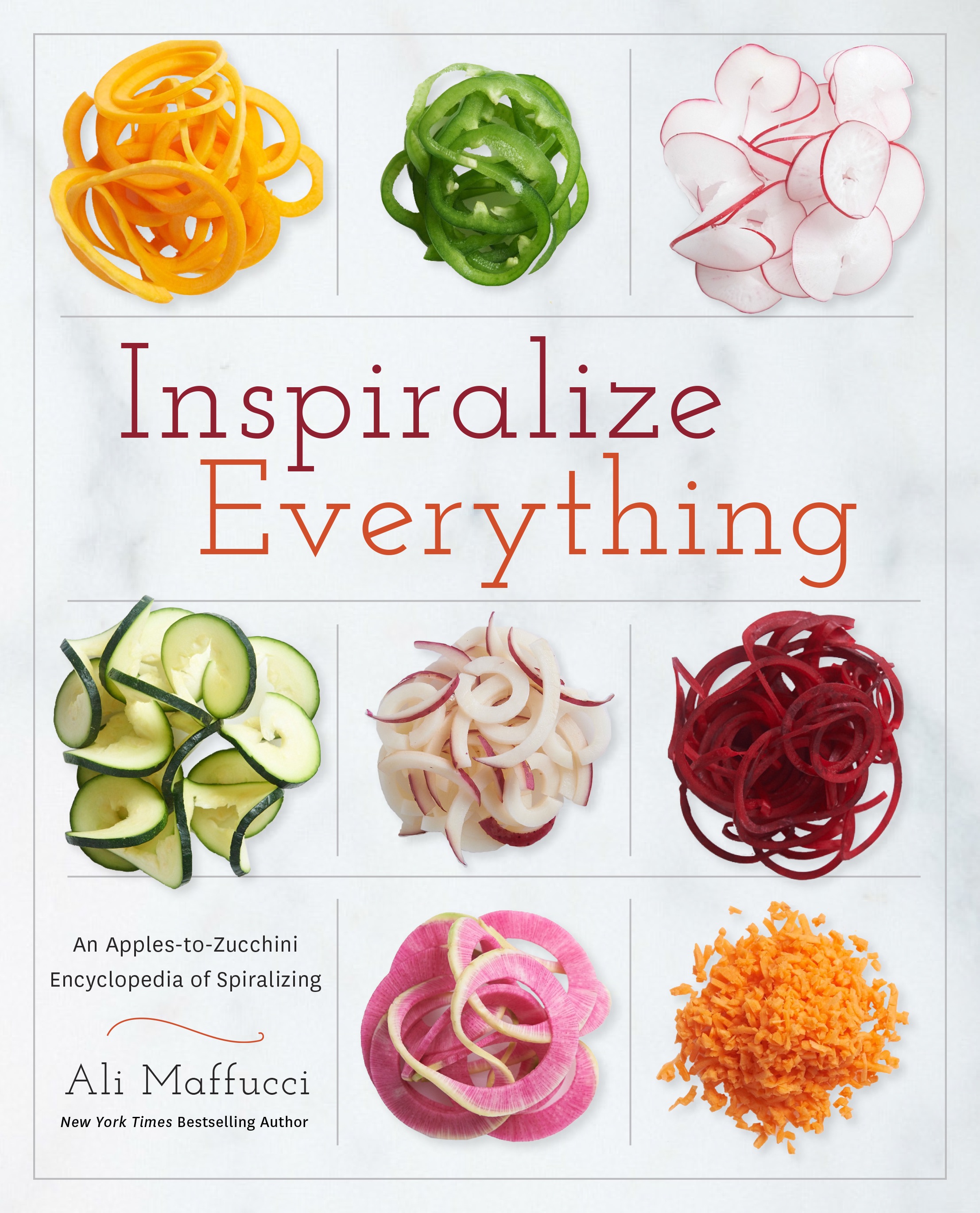 Julia Bainbridge is the former food editor of Atlanta magazine and a James Beard Award–nominated writer. Formerly an editor at Yahoo Food and Bon Appétit, she has also worked at Condé Nast Traveler and Food & Wine, and her writing has appeared in Playboy, Organic Life, Jarry, Brutal, Bake, Paper, Man Repeller, and Food52, where she was the online publication's first writer in residence. She's also the host and creator of The Lonely Hour, a podcast about loneliness that’s not a bummer.