Get a free recipe
Subscribe
A Roux by Any Other Name
By: Amethyst Ganaway Photos: Peter Frank Edwards 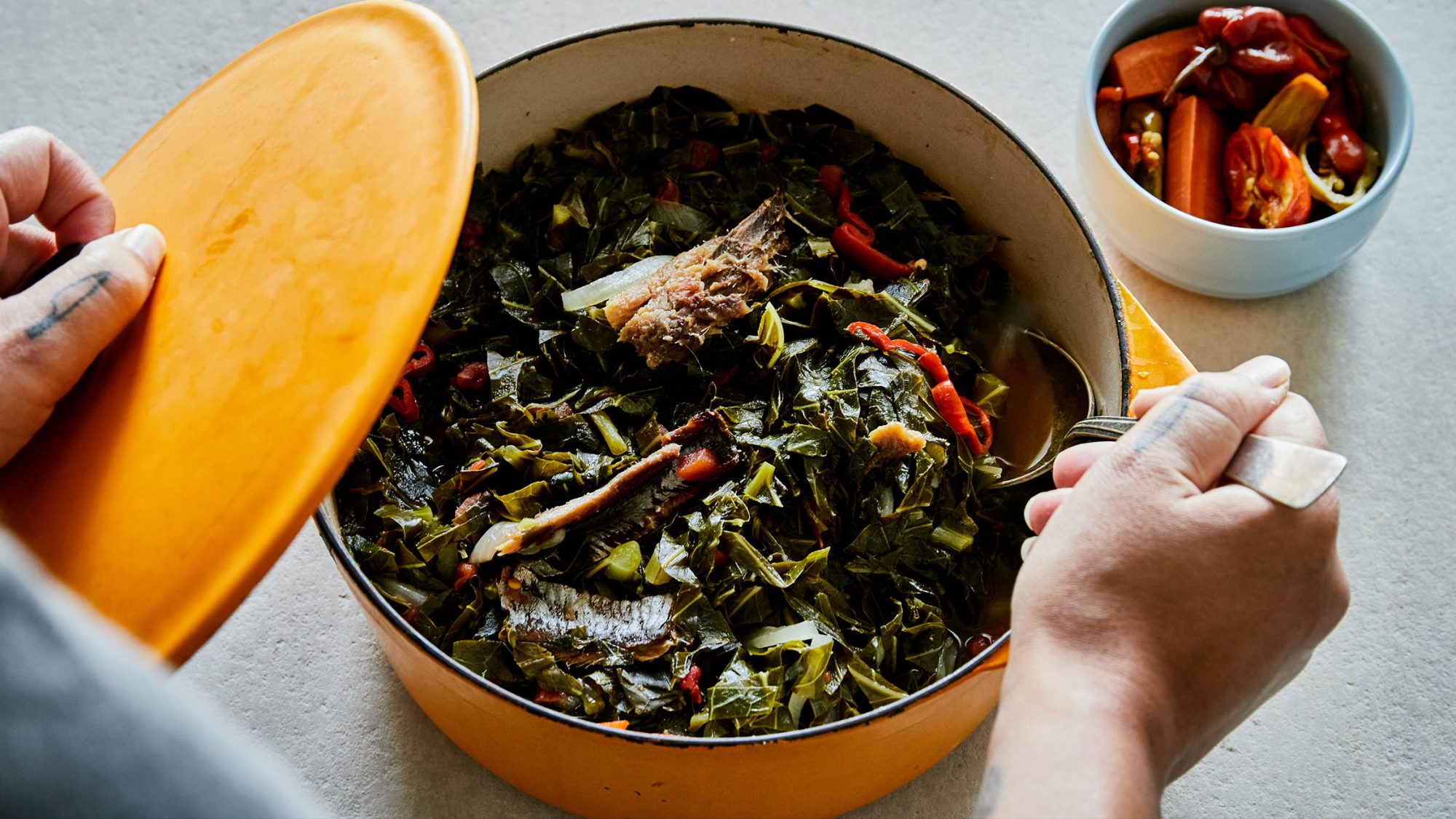 Who gets credit for a classic cooking technique, like a braise, chiffonade, or demi-glace? The chefs who named them.

My culinary education began by watching the people around me cook, starting with my grandma, great-grandma, and aunts, and stretching to the women who became mentors and caregivers for me as I lived across the South. Whether it was for a barbecue, baby shower, funeral, or just a weekday meal, I would watch the way they moved their hands while preparing and cooking collard greens, each step carefully planned. I paid attention to the splash of the water as they scrubbed the leaves clean of dirt in a sink, then ripped them off their woody stems in one fluid motion and put them in a layered pile on a countertop or in a bowl.

Gathering the leathered stack of green, they would gently roll the leaves like tobacco in a cigarette. Cutting them down into thin, uniform slices with precision was essential—so that they would cook quickly and evenly in a smoky, salty liquid of meat and vegetables that sat waiting on the stove. That same stock had been cooking for hours, skimmed and watched over and ready at just the right time for the greens to go in.

In most culinary circles, I’m considered self-taught, and it’s pretty obvious when I speak about classic French skills or dishes—mother sauces, julienne, braising—simple things that you probably learn in your first year of culinary school. It wasn’t until I started working in restaurants as a waitress in college that I began to hear these cooking techniques I grew up with framed in French terms. I learned the definitive steak au poivre and demi-glace recipes, as well as how to slice a tenderloin and all the different cuts of beef served at a chain steakhouse.

But plenty of the skills I learned—how to make stocks, sauces, and reductions; how to braise beef and chicken—I recognized from the home cooking I grew up with. These techniques were not invented by the world of fine dining or in the halls of Eurocentric culinary schools. They were practiced across continents way before any book had been written about them, in someone’s kitchen that was not unlike my own or the kitchens I grew up in. When I watch someone make what I’ve always known and referred to as “gravy,” I’m reminded of these parallels. While it may not fit perfectly into Escoffier’s list of mother sauces, “gravy” is a ubiquitous and endearing term for the many nuanced and flavorful sauces used to smother, cover, and accompany dishes across the South. Sausage gravy, tomato gravy, chocolate gravy, brown gravy, white gravy, red-eye gravy—I sound like Bubba telling Forrest Gump how many shrimp recipes there are. My first real memory of making a gravy isn’t of a silky bordelaise but of the brown sauce made for smothering shrimp and littleneck clams for grits or rice. I remember watching my grandma (and luckily, I still get to watch her) use her well-seasoned cast iron skillet to gently fry fresh local brown shrimp and sweat down slivers of yellow onion to create bits of what I now know as fond on the bottom of the pan.

These techniques were not invented by the world of fine dining or in the halls of Eurocentric culinary schools.

It’s the same concept used to make a roux, and I was simply told that’s where the flavor and color was being created. She’d add a little flour to the pan to soak up the leftover oil, then pour water in as she quickly stirred with a fork so that there would be no lumps in her sauce. Reducing that mixture down, she’d sprinkle a little salt here and pepper there, then add those shrimps back in right at the last minute so they were still perfectly cooked. Over a hot bowl of grits, there is no better eating. Anyone who’s ever had a bad, watery, or overcooked bowl of shrimp and grits could tell you that a real one requires forethought, learned skill, and true technique. But despite the sophistication of the dish, it’s usually looked down on as some sort of “simple” dish that needs refining and sous vide eggs to be considered complex. While the dishes and techniques I speak to are from my experience as a Black Southern woman, I am positive other people of color can identify with watching their traditional techniques get brushed aside as simple and unworthy until the hottest French or New American restaurant has christened it “nouvelle” or “haute.” I’ve been lucky to work in and eat at many restaurants over the years—I’ve learned so much that I know I wouldn’t have seen in my family kitchen from brilliant chefs and managers. But I’ve also learned from hands that weren’t taught at a culinary institution but guided by centuries of experience.

Of course, cross-cultural connections have happened for hundreds of years. Were my ancestors using flour to make a roux before their enslavement forced them to learn to cook in the ways that their oppressors wanted? Probably not. But by the time the flour reached them, they had already discovered that okra, melon, and leaves of edible plants could be used to thicken their sauces and soups, and that tough cuts of meat or chewy leaves could be made tender with long, gentle cooking—just like most people around the world who had to farm or hunt and make every little bit of the food they had count in the process.