Get a free recipe
Subscribe
A Roasted Chicken Worth Its Salt (Crust)
By: Matt Trueherz Illustration: Ellie Skrzat 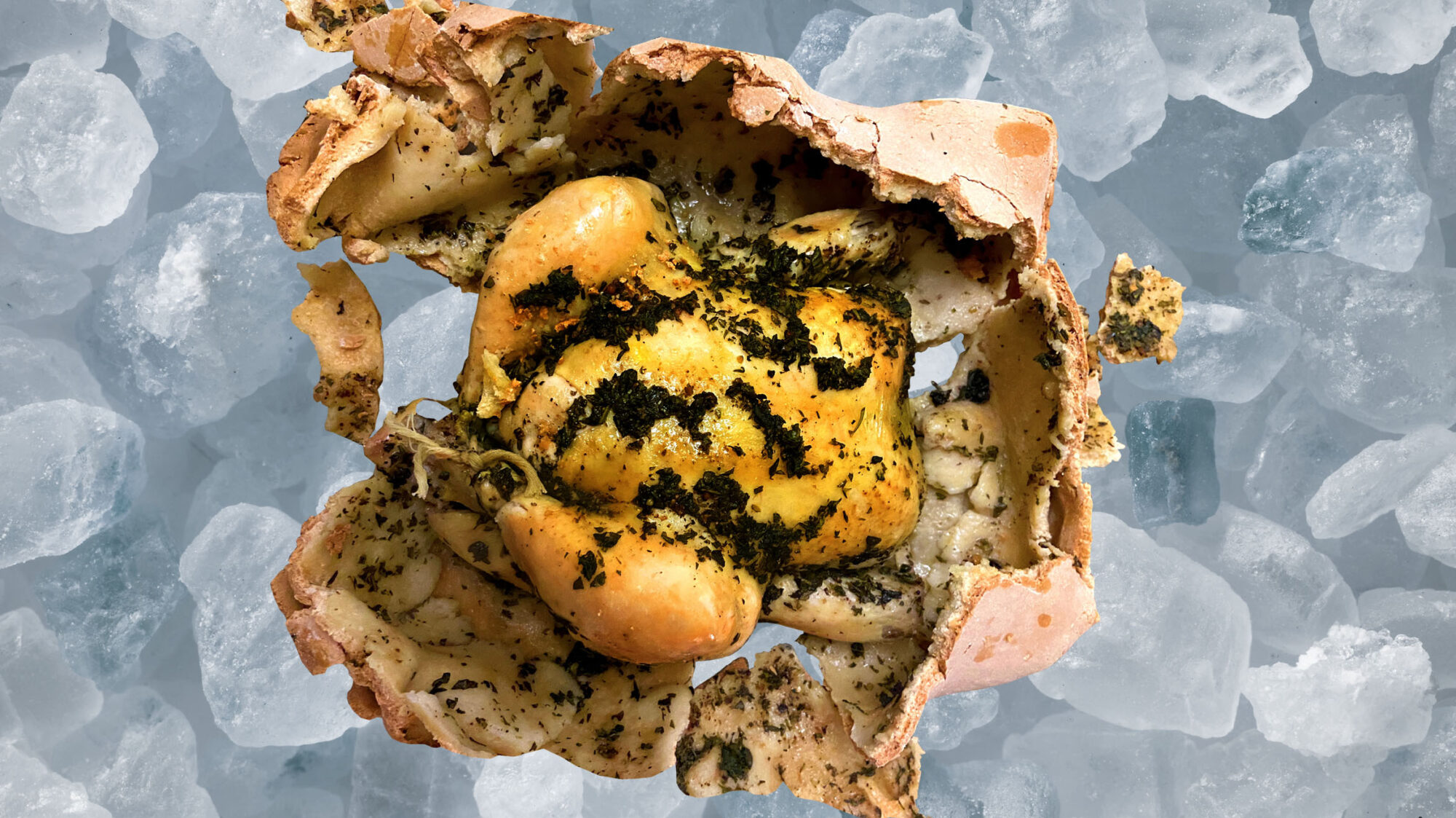 The key to a perfectly cooked whole bird lives in that box of kosher salt.

A good roast chicken doesn’t require more than olive oil, salt, and time. Still, many recipes use the bird as a blank canvas for a grab bag of technique and nuance—some working and others not so much. Cheffy takes can rely on name-dropping and intriguing props like hair dryers, beer cans, or the odd jar of mayonnaise to create a dinner centerpiece with extra-crispy skin and a good story to back it up. It can become difficult to see chicken alone for the deeply satisfying meal it can be—to let chicken taste like chicken!

Though it will undoubtedly earn them, roasting chicken in a salt crust isn’t a cheap ploy for oohhs and aahhs. The inedible salty crust serves as a safe-deposit box, perfectly seasoning and insulating the chicken to ensure your investment of time and money won’t be over or undercooked. Protected from the oven’s oftentimes erratic heat, and continually basted by the juices held in the enclosed parcel, the bird cooks slowly and gently. The legs cook until they fall off the bone while the breasts delicately steam, assuaging any anxiety over dried-out light meat. After a few hours of anticipation, breaking open the modest-looking bundle makes for an opulent reveal: juicy light meat and meltingly tender legs.

The inedible salty crust serves as a safe-deposit box, perfectly seasoning and insulating the chicken to ensure your investment of time and money won’t be over or undercooked.

The secret to a good salt-roasted chicken lies in the crust. Simply packing salt around the bird (or whatever else you’re crusting) is the most classic method, but it uses loads of salt and makes a mess. Instead, this recipe makes a dough with salt, a bit of flour, and a few eggs that’s easily rolled out and wrapped around the chicken, creating a tight seal to hold in the herb-spiked, mustardy marinade while making sure none of the unpalatably salty crust gets to the table. Be wary of the brand of kosher salt you use, as saltiness can vary widely. Use the reduced amount listed below if substituting Morton salt for the recommended Diamond Crystal. Not all kosher salt is created equally.

This recipe forces you to spend some time on a bird we often take for granted. Because the crust diffuses the oven’s heat, this recipe takes a little longer to cook than a standard roast chicken recipe. Preparing the crust and wrapping it around the chicken also takes more effort than throwing a simply seasoned bird into a hot oven, adding a level of suspense as you wonder what’s happening beneath the surface. But this added time and effort make the end results both feel and taste special. Eventually, breaking open the crust tableside is an event itself, great for impressing dinner guests or adding some flair to a weeknight meal. The perfectly cooked, impossibly tender results and comforting aroma speak for themselves.

Recipe: Chicken in a Salt Crust

Matt Trueherz is a writer and recipe developer based in Portland, OR. He draws from a decade of cooking in award-winning restaurants to interpret their philosophies for the home cook.