Get a free recipe
Subscribe
A Requiem for Tarragon
By: Mari Uyehara Photos: Eric Helgas 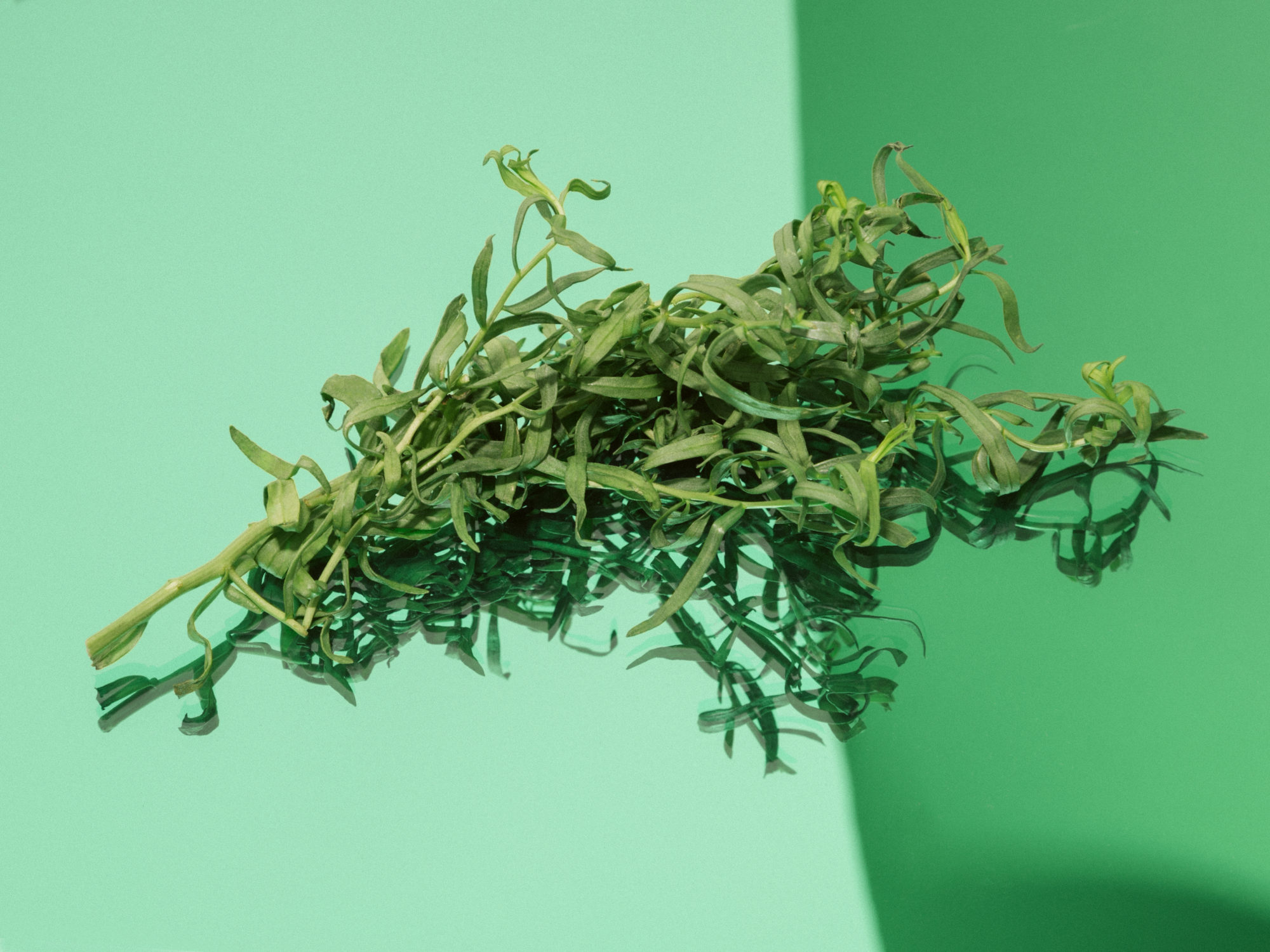 Whatever happened to tarragon? Did it have to die so others could live? Just a little over a decade ago, it was the banner herb of sophisticated cooks. Its distinct flavor, anise-like and a little grassy with the tongue-tickling sensation of Sichuan peppercorns, enlivened some of France’s all-important sauces, béarnaise chief among them. It was the marquee ingredient of the country’s classic dishes, like poulet a l’estragon (tarragon chicken), and sprigs of its long, graceful leaves were seen displayed in tall glass bottles for vinaigre à l’estragon.

For most of its dining history, all of New York City’s fanciest restaurants were French, and they all served tarragon in one form or another. (You can still find it at the last of the city’s fusty classics, La Grenouille, in the form of lobster raviolis in a tarragon beurre blanc.) But in our new multicultural era of buzzy dining, it is nowhere near the essential it once was. I noticed this while perusing the menus of three new French-inspired restaurants in New York City. Two of them, Frenchette and Chez Ma Tante, cooked with international ingredients like shiso and harissa, alongside petit pois and pâte de campagne—but no tarragon in sight. Only Le Coucou gave the storied herb a chance, pairing it with sweetbreads for ris de veau à l’estragon and sprinkling it, as part of a chiffon on fine herbs, on fried soft-shell crabs. This was a drastic change for the once-ubiquitous tarragon.

Since the dawn of the Republic, French food and by extension tarragon has held a special place in America’s culinary hierarchy. That may be, in part, thanks to Thomas Jefferson, one of the country’s most noted Francophiles and one of its first globe-trotting gastro-nuts. While serving as George Washington’s minister to France from 1784 to 1789, he traveled widely in Europe, along the way picking up a taste for French-style independence and stocking up on foreign specialties: a waffle iron from the Netherlands, crates of pasta from Italy. Upon returning to the U.S., Jefferson lamented that the European foods he grown to love, including olive oil, vinegar, and moutarde d’estragon (tarragon mustard), were nowhere to be found in the nation’s nascent capital. Tracking down these culinary treasures became a personal mission, and he set out on a years-long quest to bring tarragon to Monticello. Finally, in 1806, he acquired his first roots from Irish-American horticulturalist Bernard McMahon in Philadelphia and became one of the earliest American distributors of tarragon. Native to Siberia and western Asia, tarragon didn’t arrive in Europe until the late medieval period, most likely brought by the Arabs. They called it tarkhn and used it to treat snakebites. There are two varieties: Russian, wild and much milder in flavor, and French, or true tarragon, which is more pungent and aromatic. It was used as medicine (it is said to relieve toothaches, flatulence, and rheumatism), but in France, the long-leafed herb became most celebrated in the kitchen.

If you bite into one of its slender leaves, you get the same mouth-numbing sensation as with a Sichuan peppercorn. That’s because it contains a compound, cis-pellitorine, similar to one found in the peppercorns and another similar to one found in anise and basil. Its characteristic flavor, like a particularly bold shade of lipstick, is best deployed by an expert hand. It requires discipline. Too much and it can easily overwhelm.

You can find it in the sabzi khordan, the flush pile of herbs served with Persian meals, and served in heaping plates along lavash in Armenia. It is so beloved in the Tuscan city Siena (it’s called dragoncello in Italy) that it became known as the city’s official herb. But it was never as widely embraced in Italy as it was in France, where it was enveloped into all sorts of dishes, gribiche, tarragon jelly, and even just minced in with cold eggs.

In the U.S., tarragon started popping up in newspaper mentions in the early 1800s, about ten years after Jefferson started propagating it. “Tarragon is a plant, much us’d in Sallads. It hath a Sharp aromatic taste,” read a note from a friend in Jefferson’s collected papers. Tarragon vinegar was highlighted in early American cookbooks: Round the Table by Victor Chevalley de Rivaz (1876) advised making it by filling a stone jar with “as many tarragon leaves…as it can hold without pressing them down.” Julia Child used it both sparingly and freely, adding small dosings in many, many dishes. She deployed it in pinches to lobster thermidor, coq au vin, and cream of cucumber soup—ever-present even when hidden. Child’s strictly traditional, often laborious French food gave way to a different kind of cooking. In 1977, Sheila Lukins and Julee Russo opened the gourmet and game-changing carry-out shop the Silver Palate in Manhattan. “Whenever possible, we use American ingredients, local ingredients,” Lukins told Patricia Wells for The New York Times. They ushered in a new era of American home cooking with their seminal books The Silver Palate and The New Basics, the latter of which went on to sell more than 1.8 million copies.

Their style introduced a breezy confidence to American cooking, still grounded in continental cuisine but freed from the strictures of mere recitation by integrating other cuisines, like Moroccan chicken pies and borscht. Lukins drew all the illustrations, which was part necessity (they couldn’t afford photography), and chapter headers had colloquial names, like “mousse magic,” which drove the more personality-driven style that became the standard for food blogs, TV personalities, and even restaurant brands.

The Silver Palate presaged the global mix-and-match style predominant today. Tarragon still played a prominent role, with creamy tarragon-mustard dressing, lobster ravioli with fresh tarragon, and tarragon pea soup. A 1980s classic tarragon chicken salad was emblematic of the era; it felt new, but still familiar and not fussy. The addition of cosmopolitan tarragon separated it from earlier eras of American chicken salads. The herb held onto its elevated stature through the early aughts—the July/August 2001 Saveur dedicated a feature to it under the simple headline: “Elegance.” But then, like its late-20th-century compatriots—arugula and raspberry vinaigrette—tarragon became a victim of its success. The newness and French elegance that once captivated generations of Francophile cooks faded to passé. Chefs and curious cooks moved onto other new ingredients. Instead of the bold flavor of tarragon, we now pursue turmeric, shiso, and za’atar. I imagine that if Thomas Jefferson were alive today, he’d do the same.