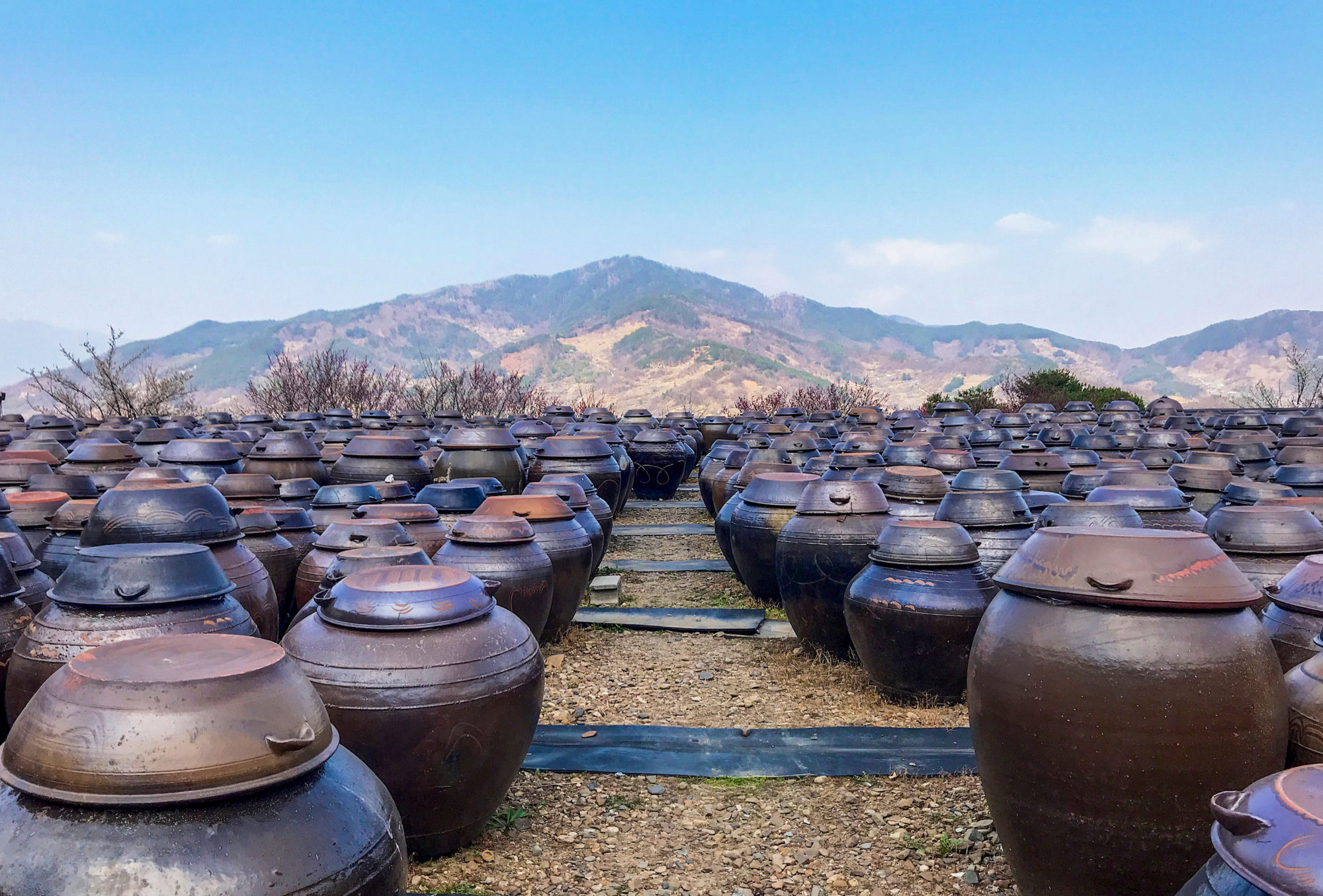 American chefs and home cooks are gaining access to traditional Korean ingredients, one bottle of fig vinegar at a time.

For many years now, delicious stowaways have made their way from South Korea to the United States under the cover of clandestine packing. Tucked inside luxury handbags, carefully sandwiched between bubble wrap, or buried under layers of coats, socks, and expensive facial moisturizers, they are part of the Great Suitcase Ingredient Flyway, a route designed to circumvent the prying eyes of U.S. Customs and Border Protection agents.

“I would smuggle everything,” admits Jennifer Yoo. “Dried seaweed, fish cakes, all kinds of jang. Honestly, I don’t want to say too much in case some of your readers work for the TSA.”

Yoo’s experience is shared by many Korean chefs working in America, including Junghyun Park, the chef-owner of New York City restaurants Atoboy and Atomix. “We bring back artisan products, such as Korean tangerine vinegar, fermented pine leaf extract, plum jangajji,” says Park, whose modernist tribute to traditional Korean cooking has made Atomix one of the city’s toughest prix-fixe reservation du jour. He and his team of collaborators and sous chefs have traveled extensively throughout Korea to source ingredients, relying in part on the semilegal import method (checked luggage) to bring the best products back to their midtown kitchens.

All that travel gave Yoo an idea. In 2017 she and her business partner Rob Thompson started Gotham Grove, a New York–based company dedicated to widening American access to traditional Korean ingredients and championing the small businesses who make them. Yoo still travels regularly to Korea to visit her family, but these days she spends a lot of time there meeting with small craft producers and helping them to master the vagaries of American import and distribution. Many of them are represented exclusively by Gotham Grove in the U.S., including the vinegar makers Hanega, aged soy sauce purveyors Artisan Fermentory, and seed experts Queens Bucket. Kisoondoo, an artisanal brand of strawberry gochujang sold in 230-gram pouches for $22

Gotham Grove’s focus on quality both drives its mission and differentiates its products from the more readily available items in the United States. “Korea is a conglomerate-driven country,” Yoo explains of the country’s insular and extremely powerful chaebol system. While big brands like Hyundai or Samsung are known in the U.S. only for cars or electronics, “in Korea, they have everything from department stores to amusement parks to food companies.”

The landscape, she says, has made it difficult for small businesses to thrive. In both the U.S. and Korea, it has led to the domination of factory-made products in the market for foods like soy sauce and gochujang—mother sauces fundamental to the Korean cooking tradition and found in recipes both elaborate and humble. The soy sauce you buy at a Korean market has likely not been fermented; it’s made within a couple of days,” Yoo says. “It’s not a true soy sauce by any means. And the gochujang is full of sugar.”

It’s all starting to change, says Junghyung Park, as a new generation of Korean chefs and diners reconnect with a small-batch approach to food production. “Rather than thoughtlessly grabbing for the most popular and available commercial soy sauce or gochujang, people are beginning to [seek out] artisan-made, locally made small brands,” Park says. “That’s the consumer trend as of late.” Hanging blocks of meju, a key component in the production of Korean jangs

This trend also has a generational component. “You have to remember, older generations of Koreans rarely had to purchase these kinds of ingredients from the store,” says Seung Hee Lee, an Atlanta-based chef and cookbook author. “It’s a modern thing that only came in after the Korean War. My grandmother still makes soy sauce, soy paste, and gochujang at home. The new movement simply puts this in a modern restaurant context; it’s all very new and yet very, very old at the same time.”

In the same way that restaurants like Atomix, Parachute, and Majordomo have helped expose American diners to modern Korean cuisine, Gotham Grove is giving Korean foundational ingredients—jangs (sauces), vinegars, oils, and seeds—their rightful place in the pantry alongside, say, Occhipinti olive oil from Sicily or clothbound raw milk Cheddar from Somerset. Yoo’s curation focuses on products from the smallest of small businesses; the company’s modest shipping fee is far less than a ticket to Seoul (and negates any TSA risks).

Gotham Grove’s 40-plus restaurant clients (the number is growing thanks to a distribution deal with Regalis) have treated the company as something of a godsend. Although the kitchen at Atomix makes a range of its own jangs and oils, says Park, they rely on Yoo to bring in premium Korean ingredients like perilla oil and fig vinegar. Their ingredients have also found their way into non-Korean restaurants, like Daniel, where chef de cuisine Eddy Leroux is an avowed fan, and at Bâtard, where Yoo’s husband, John Winterman, is a managing partner and the Austrian-born chef Markus Glocker has embraced the product line with mash-up glee. In Brooklyn, the Four Horsemen—a trendy wine bistro from LCD Soundsystem founder James Murphy—team pairs Gotham Grove’s range of soy sauces and jangs with mind-bending natural wines; a few stops further along the L train at Blanca, imported Korean vinegars with flavors like fig and snail are incorporated into a nightly tasting menu. Hanega vinegars are produced at the foot of Korea’s Manisan mountain on Ganghwa island, near the Yellow Sea.

In Atlanta, Seung Hee Lee weaponizes Gotham Grove’s imports in contemporary Korean dishes like spreadable kimchi ‘nduja and Korean fried chicken made using Kisoondoo brand artisan gochujang. “These products have made me really proud to represent Korean flavors,” Lee says. “It makes me proud because I see people’s eyes opening, and I see them wanting to understand what they’re eating.”

That aha moment is also critical at Atomix, where the driving comment, from The New York Times’ glowing review on down, has amounted to some version of “I’ve never tasted Korean food like this.” And that’s true, actually: Gotham Grove is the first to represent these brands in the United States.

At a recent pop-up dinner in Atlanta, Lee—who lives a kind of double life, working by day as an epidemiologist for the CDC—served Korean fried chicken lacquered with a gochujang sauce on an enormous Georgia flour biscuit. For dessert she paired pound cake and buttermilk ice cream with caramel made with doenjang. These dishes evoke the natural progression of Americana, which is to say, the real Americana; they’re the descendants of a moment in midcentury history informed by a global influx of working families, ingredients, and ideas that came into the United States in the 1960s and ’70s, following the Immigration and Nationality Act of 1965. Gotham Grove’s products are intended as much for home chefs as restaurant chefs. You can use Gotham Grove’s strawberry gochujang as a base for something as simple as avocado toast, or splash some fig vinegar over fresh greens for a salad—or drink a teaspoon of it straight each morning, like Lee’s dad.

Gotham Grove’s aged soy sauces (three and five years) are a revelation; a dash adds depth and funk to any stir fry and can readily substitute for fish sauce if you’re cooking vegan. In a sweet dish—like Lee’s recipe for yaksik, Korean honey rice with chestnuts and jujube—it offers resonance, harmony, and a long-lasting tang.

The best thing I tried from Gotham Grove was also the simplest. At another one of her pop-ups, this time in Copenhagen, Lee instructed her guests to dip the local rye bread into a simple mix of perilla oil and crushed perilla seeds. Both products are made by Queens Bucket. I tried this at home with a grandma loaf from the Russian bakery near my house and marveled at how the springy, perfectly sour rye was offset by the subtle, vegetal perilla and still-crunchy bits of seed. These flavors evoke thoughts of the sea and a long voyage home—or perhaps just a very long and worthwhile flight.