Get a free recipe
Subscribe
A Cookbook Worth Its Salt
By: Rachel Wharton Illustration : Nick Hensley 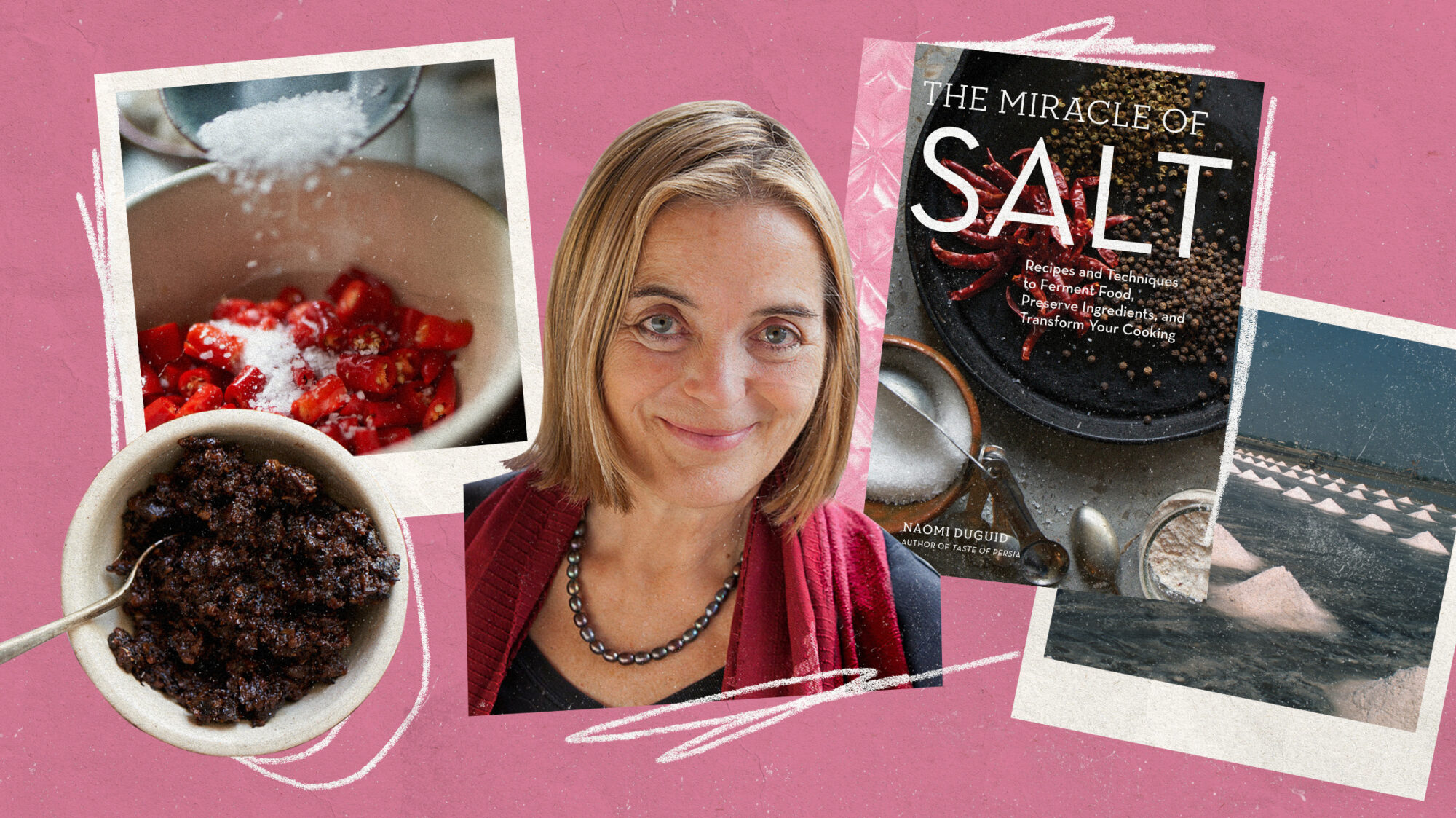 World-traveling journalist Naomi Duguid dives into the building blocks of cooking with The Miracle of Salt.

If you’re familiar with Naomi Duguid’s catalog of erudite and best-selling cookbooks—the Canadian writer and photographer’s work takes us around the world through shared foods like flatbreads and rice—then her ninth and latest book makes perfect sense. It’s The Miracle of Salt: Recipes and Techniques to Preserve, Ferment, and Transform Your Food.

Required by basically all living beings (and creating much of food’s flavor), salt is the most universal ingredient of all—which may be why the hardest part of working on the book, Duguid tells me, was deciding how to approach the massive topic. Do you talk about salt by continent and history? By recipe type? By technique? It took her months to figure it out, she said, but in the end, she neatly tackles it all.

The first half of Duguid’s book covers the basics of brining and salting, a guide to all the things you ferment or cure with the help of salt, like Acadian salted scallions, Armenian basturma, Hunan-style chiles, pickled green mangoes, or preserved lemons. The second half of the book is Duguid’s recipes for what to eat with these salty things, from miso chocolate cookies to Brussels sprouts and potatoes with salt pork, and from kimchi omelets with turmeric to bitter melon stir-fry with salted black beans. (You could make the miso or the salt pork or the black beans or kimchi yourself, Duguid tells you, or you could just buy them and appreciate the world of flavors imparted from generations of technique.)

Connecting all of the above are Duguid’s iconic photos and reported essays from visits to the places where collecting salt has been a part of the literal landscape for centuries: the barren orange cliffs of the semi-abandoned Telouet salt mine in Morocco, the blinding white salt ponds in the Indian state of Gujarat, the saline Blackwater River in Maldon, England.

I recently spoke to Duguid over Zoom about visiting these “austere” terrains, as she puts it; about working on such a vast topic; and about the joys of both red and green ajika, the Georgian condiment made from salted hot chiles and herbs.

You’ve done the ingredients around the world before. Was working on this book different than the others?
Yeah, in a way, because I did have to time-travel. I never had to do that with the other books. I’m always interested in the anthropological history. In Hot Sour Salty Sweet, there’s an anthropological map of peoples living in the regions. It shows history and some change over time, but it’s not really central to the book. But when I was going to different salt places, I wanted to photograph them just so people could visualize the extraordinary history of these places. Various things were closed because of the pandemic—I didn’t get to Australia for photographs of anything salt. I wanted to get to Mexico for salt, to Colima. But so much is closed anyway, because it’s from another time, so I had to do time-travel anyway.

It was interesting, too, because mostly, when I was making photographs for earlier books, I was trying to communicate a cultural context, so it’s less “other” for people for whom it’s other. But in this case, what’s the role of my photographs in the book? It’s just trying to cumulatively make people amazed and sort of appreciate that all of our ancestors and currently people in many places are working in these difficult environments to get this thing that we can’t live without.

Your photos of salt production could be an incredible photography exhibit all by themselves.
Absolutely. Especially you see, now, people with drones. There are all these extraordinary things where you can do all kinds of aerial work. Not what I do, not what I know about. But if you just send a drone over the salt ponds in San Francisco Bay, [there are] all those colors. Have you flown into San Francisco?

Yes, but I’ve never thought to look for the salt ponds.
Take it in. It’s all these different colors. It’s incredible. It’s also very inhospitable to human life. We need salt, but too much of it—and really, a small amount is already too much—kills, or kills us, or preserves us, or desiccates us; all those things. It’s an austere kind of beauty.

I wanted to ask you about this one recipe for salt-preserved chiles and herbs. In the book, you have green ajika, which makes me wonder, is there another color of ajika?
Well, there are many. Ajika is originally from Samegrelo, which is kind of western, northwestern Georgia. Georgia is a small country, but it’s got very distinct regions and regional cultures and regional culinary cultures. There’s a red ajika and a green ajika in my Persia book. The green ajika in this book is a version of that same green ajika, which I got from a friend whose grandmother is from Samegrelo and whose mother is from Samegrelo. And so I really love it. I took a group around in Georgia just in September, and it’s the third time I’ve done it, with a Georgian friend. And the first day we make ajika—it then has to sit around, and so by the time they leave, ten days later, it’s in jars for them to take home. It’s kind of nice.

Green, is it a spring thing?
Green is a summer thing. So green is because it has all kinds of fresh herbs, and then the heat comes actually from dried red chiles, whereas the other ajika is all made of fresh ones. The red ajika is made with all fresh ingredients, so fresh sweet red peppers, fresh hottish red peppers, and then garlic—you sort of soak it and then peel it—and walnuts, and that’s it. And salt. And they’re all ground together, and then they have to sit in a bowl and learn to play nicely together. And then, eventually, after about seven or eight days, you put them in jars, and then there you have it.