Get a free recipe
Subscribe
A Chicken That Gives Itself a Standing Ovation
By: Zola Gregory Photos: eli Lu 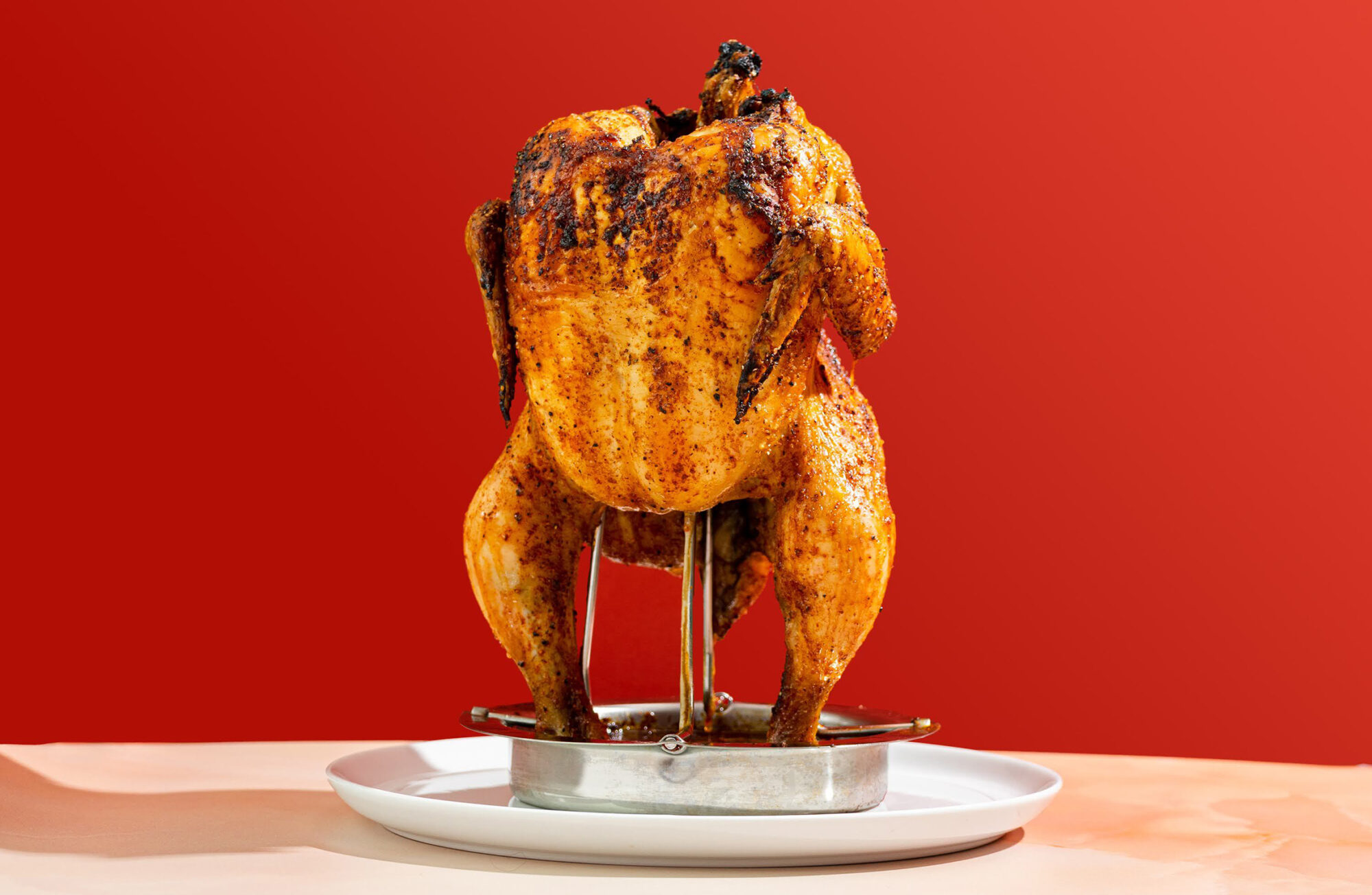 There are infinite good ways to roast a chicken: trussed in the traditional French style, spatchcocked, under a brick. However, it’s my grandmother Sydney’s method that is my favorite. Her roast chicken emerges from the oven standing upright, thanks to the help of a vertical roaster.

A whole roast chicken already makes any meal feel like an occasion; a standing chicken commands the room. The difference lies in a pointy contraption that holds the chicken in a standing position as it cooks, allowing the fat in the neck and breast to baste the chicken as gravity pulls the drippings down. The upright position also allows the chicken to cook evenly on all sides, resulting in the crispiest skin and the juiciest meat.

While I typically prefer my roast chicken simply rubbed in butter or oil with a generous seasoning of salt and pepper, this preparation shines when emulating your favorite rotisserie chicken. Think about it: There’s not a whole lot of difference between roasting your chicken vertically and roasting it over a spit. In both cases, the entire chicken is exposed to hot air. Both methods produce a moist, succulent bird, only with a vertical roaster, you don’t have to install a rotating spit in your oven or manually spin an impaled bird over a roaring fire. Add a dry rub with a little paprika, garlic powder, and brown sugar, and you have a delicious treat you thought only possible straight off the warmer at the grocery store.

Before you even take the chicken out of the fridge, remove your oven racks, except for one on the lowest rung. This is the only way a standing chicken will fit in a home oven, and it’s best to do this first, before preheating the oven. Too many times, I have found myself running around with a hot oven rack, unsure of where to put it that won’t damage my floors or furniture.

Next, simply pat your chicken dry, season it, and put it on the vertical roaster. Doing this involves placing the chicken over a large spike that enters its cavity, and so every time I vertically roast a chicken, I always whisper a quiet apology at this stage to the poor bird that’s already given its life to my dinner, and that now must also give up its dignity.

Even with the chicken placed so low in the oven, the upper breast is likely to brown faster than the rest of the bird. Don’t fret about this—it won’t cause the chicken to dry out. If browning threatens to turn to blackening (all ovens are different), turn the oven down 25 degrees or cover the very top of the bird with a small piece of foil.

Once the chicken is cooked, you must perform the most difficult part of vertically roasting a chicken: removing it from its stand. As the chicken cooks and the bird loses water, it will shrink slightly, which effectively adheres it to the roaster. I recommend using tongs to remove the chicken while a second set of hands holds the roaster down. It’s best to let the chicken rest for 15 minutes first, to ensure that the meat stays juicy and that you don’t burn yourself while attempting to pry it off.

Vertical roasters come in several styles, some bulkier than others. Staub makes a cast iron model, which is one of the larger and more expensive options (costing nearly $200); however, the design combines a vertical roaster with a roasting dish and does not require the use of an extra pan to catch any drippings.

My preferred model is a lightweight stainless steel option from Norpro. It includes a small tray to catch drippings, but I would recommend placing this roaster on a sheet pan, as the included dish will catch most of the drippings but not all of them. The whole thing comes apart for easy cleaning and flat storage, and at under $20, there’s very little reason not to give it a shot.

Once you take your chickens vertical, you won’t want to roast them any other way. Whereas a horizontal chicken inevitably becomes soggy on one side, a vertical chicken comes as bronzed and crisp as one straight off a rotisserie—and it couldn’t be easier (no trussing or bone breaking!). A roast chicken makes every dinner feel like an occasion to celebrate, but a standing chicken appears to celebrate itself.