Get a free recipe
Subscribe
Who Says Cappuccinos Are for Mornings Only?
By: Megan Krigbaum 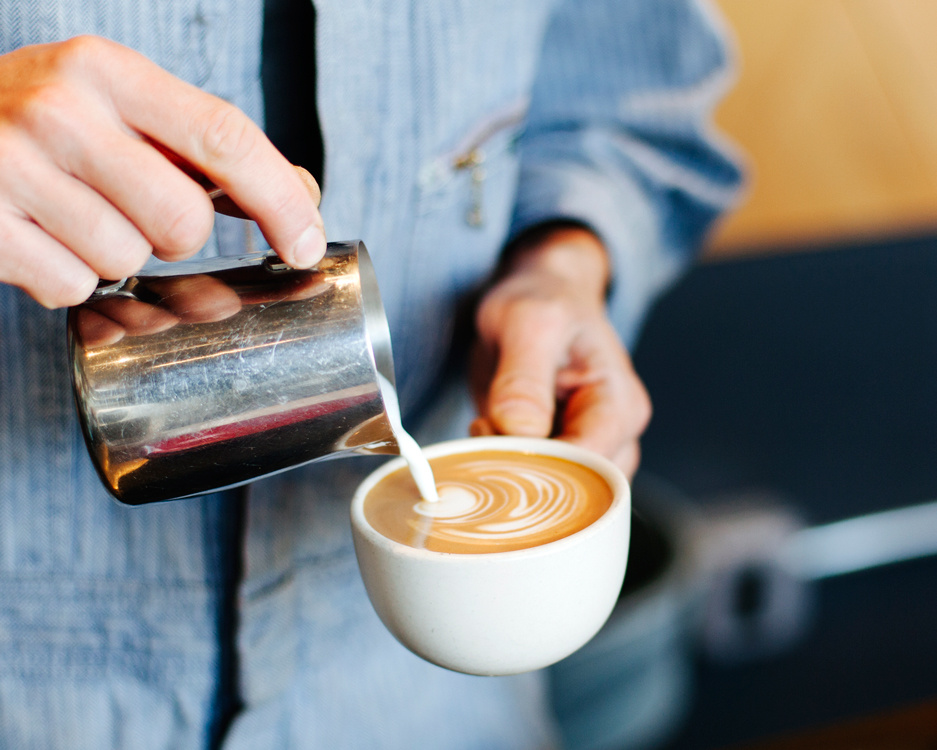 Assessing the cappuccino as a drink of refined luxury, or an everyman’s beverage ordered at the gas station or corner bodega.

The cappuccino is the smuggest of coffee drinks. That elusive pompadour of froth hovering above the milky espresso, the entire cup self-restrained in its volume. It is also the most bastardized in the espresso beverage canon. The delicately roasted, expertly pulled espresso is a shell of itself when clouded with 24 ounces of sticky foam towering above the rim like a building cumulonimbus. In the end, the espresso is an afterthought.

At least that’s the current state of cappuccinos in the States, but we’re largely still novices at this. Caffe Reggio in New York City’s Greenwich Village claims it was first to bring the cappuccino to the U.S. in 1927, which there’s no real reason to doubt. And Starbucks has been proliferating the capp since Howard Schultz, the recently retired CEO of the company, introduced it in his stores in the ’80s. The drink spread in milky waves across the country in the ’90s till it reached full-on ubiquity. Since April of this year, one can “cappuccino” any old iced drink of their choosing at Starbucks by adding on a “cold crown” of whirred-up milk foam. The company even made special plastic lids that will allow for foam enjoyment undisturbed by a straw. Niso Cavallacci, the second owner of New York’s Caffe Reggio, with the café’s cappuccino machine in 1963

We’re still trying to figure out whether espresso with foam on top is an excessive luxury to be made only by an expert team of baristas and served in a parlor, or an everyman’s drink, one that can be ordered any old place at any time of day, like at the Park Gourmet Deli on 45th Street in midtown Manhattan, say, where the man behind the counter will douse the entirety of paper cup foam in ground cinnamon before sending office workers back to their desks.

But Italians know exactly when and where to drink cappuccinos—mostly standing up and at a bar. They take them immeasurably seriously—in 2003, Pope John Paul II beatified the friar Marco d’Aviano, who is credited with (amongst other miracles) creating the cappuccino in the 17th century. If you are to believe the Vatican, in the 1600s the Ottoman Turks were marching on Vienna, and the Pope at the time sent d’Aviano to rally the Christian troops. The Christians were victorious, and the Turks retreated, abandoning a ton of coffee beans. To soften the harshness of the coffee, d’Aviano added some milk and a little honey. The drink was named for the order of monks d’Aviano was a part of, the Capuchins, naturally. The Battle of Vienna

Isidoro Vodola has been making cappuccinos behind the worn-in wooden bar at the Cibrèo Caffè, paces from Florence’s Mercato di Sant’Ambrogio, for over 25 years. Vodola uses milk from dairy cows raised in Tuscany’s Mugello area by the Picchi family, Cibrèo’s owners, and a Cimballi (the so-called Ferrari of Italian espresso machines) that he adjusts every day, mostly depending on the weather.

So while there are many versions in Italy, there’s one cardinal rule when it comes to cappuccino, no matter where you are: It’s to be consumed in the morning—and only in the morning. Vodola says he’ll serve 250 cappuccinos, 150 of which go to regulars, before 10 a.m. And then in the afternoon, unknowing tourists will undoubtedly show up at his bar and erroneously order a cappuccino. Vodola himself drinks 6 to 8 cappuccinos weekly—always in the morning.

In the late 1990s, the Instituta Nazionale Espresso Italiano was formed to recognize the companies that pull a proper espresso and make a to-spec cappuccino, so defined as one “that abides by tradition is made of 25 ml espresso and 100 ml steam-foamed milk.”

Lord knows d’Aviano didn’t pull a perfect shot from a state-of-the-art Cimballi machine and get to microxygenating some foam. The first patent for an espresso machine was filed in 1901 by Luigi Bezzera, and ever since, the discussion has been focused around getting the foam right. “It must be creamy,” directs Vodola. “It’s not so important how thick, but to be creamy is the most important thing.” Andrew Barnett, the stripes-uniformed owner of San Francisco’s five-year-old Linea Caffe, has been preaching the good word of cappuccino since he started working in coffee at the North Beach neighborhood’s Café Trieste in 1977. Over the past 40 years, during which time he’s also run a café in Santa Rosa, started Ecco roaster, and even took a spin as a carousel restorer, Barnett has been zeroing in on every facet of the drink—from the à la minute-ground coffee beans (which he roasts himself and likes to use within a matter of days) to the way he pours his espresso (he prefers a more restricted, or ristretto style) to the size of the cup (he uses a 6.5-ounce teacup from Heath Ceramics that he admits is a bit too large, but he became enamored with it, so) to the organic milk from Straus Creamery in Marin County.

It’s the textural component of what Barnett calls “microfoam” and the temperature of the milk that he’s made his point of pride. Barnett credits David Schomer, his mentor and the founder of Espresso Vivace in Seattle, with giving the coffee world an understanding of fusing coffee and milk together via this gentle, deliberate foam. Schomer’s book, Espresso Coffee: Professional Techniques, published in 1992, was first to pinpoint many processes now held as truth by baristas—and his Youtube videos are legendary in the industry. Today, Barnett has evolved what he learned from Schomer, most of which pertained to the proper way to heat and foam the milk with an espresso machine’s metal steam wand. “Once you dip that steam wand in, you never allow it to come back up, because if you do, you’re going to have the big bubbles and lose all that beautiful texture, the silky chiffon texture.” He says the sign of a good barista is one who holds the milk pitcher at the bottom—in order to feel how hot the milk is getting. Barnett aims for 135°F to 145°F. “I think the hotter the milk is, the less sweet the milk is going to be; the trick to me is capturing that sweetness,” he says, a signature of the Trieste style of cappuccino.

But at Linea Caffe, to get this sort of drink, one should call for a cortado. But that’s for another day.

Megan Krigbaum is a Brooklyn-based wine and drinks writer and a contributor to numerous publications. She's a contributing editor for PUNCH and was the editor of the Essential Cocktail Book. Before going freelance, she was a wine editor at Food & Wine magazine for a decade.